Two council members are livid that an industrial site near the Long Beach Airport is being used to store thousands of containers as the Port of Long Beach sees a spike in container volume.

Council members Stacy Mungo in East Long Beach and Roberto Uranga in the Bixby Knolls area are exploring legal options to halt the heavy truck traffic that has resulted from the temporary use of the former C-17 Boeing site.

“The utilization of that property is important to the community and city staff made decisions without community input or the input of the electeds who represent the community,” 5th District Councilwoman Mungo said. “Even though it is temporary, this is a quality-of-life issue for our residents and we will not stand for it.”

Located in the 5th District on the border of the 7th further west, the property was purchased by Goodman in June 2019 and is currently zoned for industrial use.

Despite its land designation, “this is not a good fit for this location,” 7th District Councilman Uranga said in an email. “The negative impacts on the neighborhoods and residents override the need for temporary storage space.”

Because it is a private property and the temporary use is industrial, city staff was not obligated to seek council approval or community input for the six-month lease agreement, Assistant City Manager Linda Tatum said.

In July, increased cargo movement forced drayage provider IMC Companies to seek additional storage space, which led to the C-17 site miles away from the port. A temporary lease for container storage, which includes numerous drop offs and and pickups daily, was signed by Goodman and IMC in August and runs through February.

City staff is actively working on the Globemaster Corridor Specific Plan, which will ultimately inform Goodman’s and other redevelopment along Cherry Avenue north of the 405 Freeway. Because of this ongoing process, Mungo said she could see how Goodman might have felt pressured to pen the lease to gain favor with the city.

While Goodman did not claim they felt pressured by the city, spokesperson Ben Bytheway said the company understood the use would be storage only and not require continuous truck trips.

“The use has morphed into goods movement which is unacceptable to Goodman and the community,” Bytheway said in an email. “We are working day and night to cease operations.”

“So there was no pressure exerted by myself or the city to accept that lease,” Koontz said. 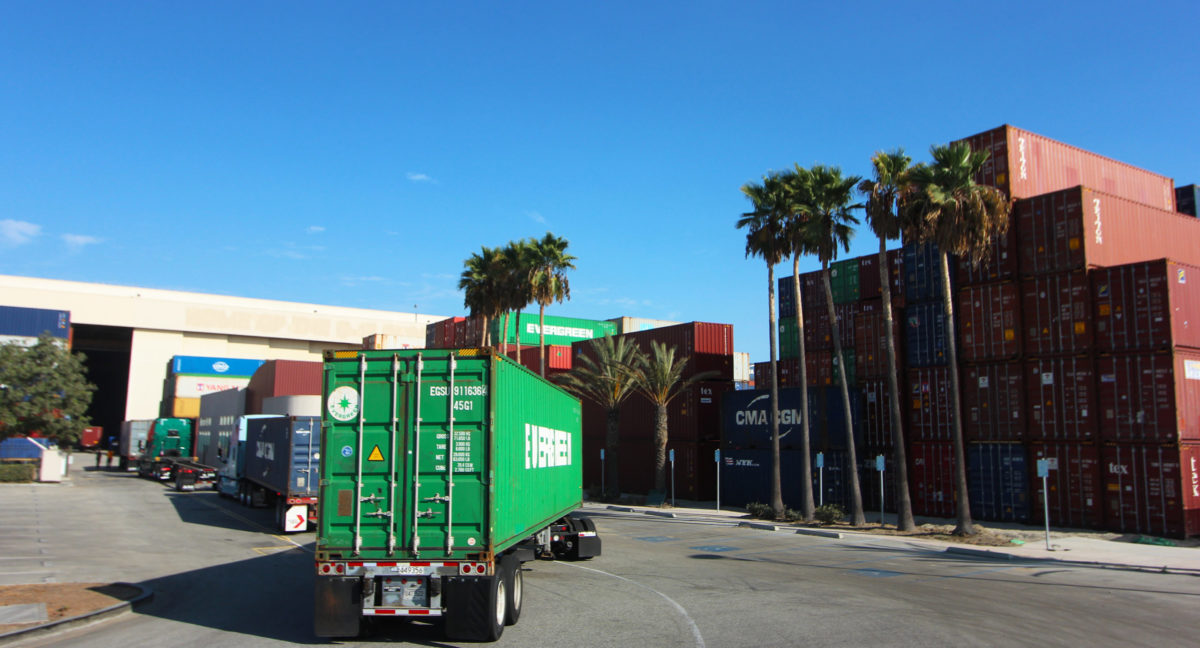 Trucks line up to drop off and/or pick up containers at the former C-17 site at Long Beach Airport, which is being used as overflow space for the Port of Long Beach. Photo by Brandon Richardson.

For its part, IMC said it is working “diligently” with city staff, the community and the port to find an alternate solution.

“Had we been made aware at the time we signed the sublease that this site would be incompatible with the standards set by the city or its neighborhoods, we never would have considered it,” spokesperson Alex Cherin said in an email.

But staff did not consider the negative effects on the surrounding residential and business community, such as increased truck traffic as well as air and noise pollution, Mungo said. A trade-off for community benefit projects would have been required, she added.

In late September, in an attempt to mitigate community impacts, city staff put a 7 a.m. to 7 p.m. limit on trucking operations at the temporary facility. However, it was not enough for the council members.

“They need to move this off this site,” Mungo said. “Immediately.”

Mungo said she and Uranga are seeking legal options to implement an injunction that prohibits any further container deliveries to the site, which would reduce truck traffic and allow the amount of stored containers to steadily decrease.

City Manager Tom Modica said the situation is unique because the use for the site was never meant to be trucking related, noting that the city passed on a bid from UPS to turn the location into a driver training and distribution center. However, the temporary need required a temporary solution, he said.

“It’s clearly led to unintended consequences and impacts that we are very cognizant of,” Modica said. “We’re realizing that needs to be corrected.”

Modica said staff is working with the port to identify other locations for container storage, the most promising of which are within the port complex. Due to the complaints from residents passed along to city staff through Mungo and Uranga, Modica said the transition to a new location is a top priority and guaranteed it would be done by the end of November but hopes it will be much soon.

But for Mungo, mid to late November is not soon enough.

“Four to six weeks,” she said, “is too long for neighbors to have to deal with this.”

Editor’s note: This story was updated to include comments from Goodman and IMC.