Renters in Long Beach will be protected from evictions spurred by property owners’ requests to remodel the units—for now—after the City Council voted unanimously Tuesday night to enact a temporary ban.

The city’s current law, which was largely dictated by the state, allowed for tenants to be evicted if their landlord pulls building permits to carry out work, provides copies of the permits to the tenant and issues a 60-day notice to vacate.

However, after months of pressure from renters and tenants rights organizations seeking to close the “substantial remodel loophole,” the council approved a temporary ban that could last through December while a long-term solution is worked out.

A substantial remodel is any renovation that requires work permits to be pulled and would take more than 30 days to complete. The ban applies to evictions issued after July 6, but permits can still be pulled and work completed so long as it doesn’t result in an eviction.

The temporary ban was proposed by councilmembers Cindy Allen and Suely Saro, who both said the ban was the product of compromise and is fair to tenants and landlords.

Allen and Saro’s request also asks for the city to look at creating a “renovation administration program” that would require future renovation plans be evaluated by the city and landlords to submit a mitigation plan for how they will minimize the work’s affect on tenants, and also bars rent increases for six months after tenants return to the units.

It could also remove substantial remodels from a list of approved no-fault just cause evictions. An amendment to the motion could also tries to help tenants at risk of evictions from permits pulled prior to July 6.

“Today, I’m honoring a promise to do more for tenants to create a more fair and equitable housing climate,” said Allen, who campaigned on closing the loophole, among other things.

“This process must stop and it must stop today,” Saro said. 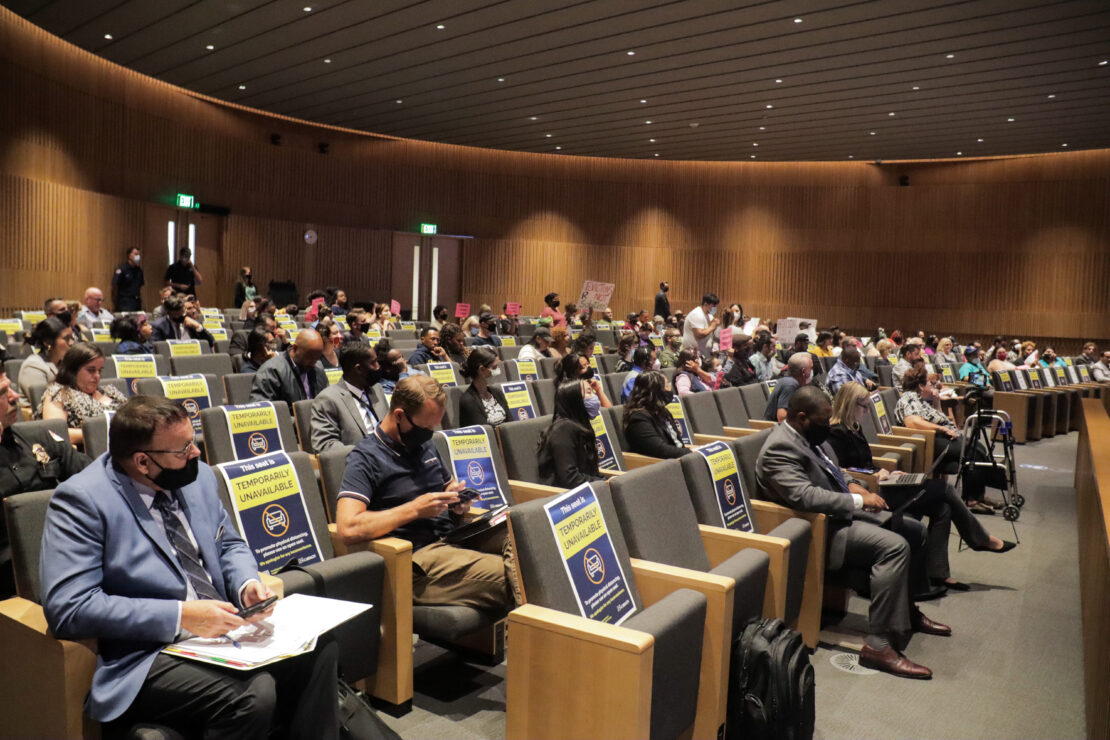 Despite the adoption of the moratorium, disagreement remains over how broadly the ban should have applied, with dozens of tenants and activists pushing Tuesday night for the council to adopt a ban that was retroactive to when the pandemic began. Property owners, meanwhile, argued the scope should be much narrower.

Deputy City Attorney Rich Anthony advised the council that making the ban retroactive would likely open the city up to “substantial litigation” by owners who already have permits in hand to carry out renovations.

The item was opposed by a variety of property management groups and small property owners who said the agenda item was poorly timed as some landlords have not received rent payments for most of or the entire pandemic.

“There is only so much we can handle with new policies that are intended to address alleged abuse by a few of existing ordinances, but these new policies that you are proposing impact all of us while we are trying to get back on our feet financially,” Kristie Pabst, owner of Pabst, Kinney & Associates, Inc said in a letter to Allen.

Pabst added that the moratorium would deter major investments to the city’s aging housing stock and suggested that the city prosecutor should be the entity penalizing those landlords that are abusing current laws.

Keith Kennedy, president of the Small Property Owners Alliance, said that civil penalties from the city attorney’s office should be used instead of a blanket moratorium that applies to all property owners.

Like others, Kennedy expressed concern that the city’s rental assistance program is inadequate and should also be addressed, calling it the “elephant in the room” as state and county moratoriums expire at the end of September.

“We need to change the qualifications and re-align them to be more in line with the way they qualified to defer rent!” he wrote. “Otherwise, the City will inevitably return much needed tenant funds back to the Federal Government and evictions will be unavoidable.”

As of last week, the city had distributed or is in the process of distributing just over $4 million out of the over $50 million in federal and state funds it received to help renters pay unpaid rents. The deadline to apply for the program is July 11.

Tenants said they are feeling the strain of the pandemic and for some, the looming dread of evictions, because their buildings have had permits pulled for work.

Karen Wyrick said that her building was acquired by a new owner and the eviction notices began almost immediately, ridding one building of its tenants and another building that was partially emptied before the pandemic.

“All of us are hanging in there scared to death we might be evicted,” Wyrick said.

Sylvia De La Rosa, member of the “Daisy Avenue Resistance,” which is part of the Long Beach Tenants Union, said through an interpreter that not only should the council make the ban apply to all renters, but that owners should have to pay for relocation if tenants are forced to leave during construction.

The council is expected to vote on an ordinance at its July 13 meeting, but the law would be effective from Tuesday night on. The city will now begin the process of meeting with tenant and property owner groups to start working out the details of the proposed renovation administration program.