Well, this whole defunding the police idea is really taking off.

During Tuesday evening’s City Council meeting, some 30 or so commenters—and not the crackpots and loudmouths who occasionally get their voices heard in disproportionate numbers, but regular people, just like you’d find in The Backroom’s lounge and patio—offered a number of solutions to alleviate some tough decisions that need to be made to keep Long Beach afloat for at least as long as the Queen Mary is. The solutions were overwhelmingly similar.

You want to keep parks? Take money out of the police budget.

You want to keep libraries open? Raid the police budget.

You want to save fire engines? Here’s an idea: Pay for them with that sweeeet cop cash.

Be the first to know.
Get the Backroom delivered to your inbox every Thursday.

Chief Robert Luna and his command staff, and the City Council for that matter, have so far said there’s just no more fat to cut. After all, they’ve moved a couple dozen crossing guards out of the department and transferred them to public works. There’s $1.4 million right there.

And they’ve eliminated six police pilots—helicopter drivers—and replaced them with a pair of civilian pilots.

Believe it or not, as if those cuts weren’t debilitating enough, some sworn positions have been eliminated, though many of those were already vacant and merely won’t be replaced.

Because of some vaporous math, the department has saved you, the taxpayer, about $4 million. We lose that much in a bad slump of Liar’s Poker.

The police union, meanwhile, is doing its best to stir fear in the minds of the masses, warning that sending civilians without guns—er, “safety devices,” as one councilwoman described them on Tuesday—to calls would be a “recipe for disaster.” One particular Facebook post, courtesy of the union, shows the eyes of a terrified child, presumably at the exact moment of being grabbed by a pedophile, with a warning: “Don’t cut the violent sexual predator unit.” 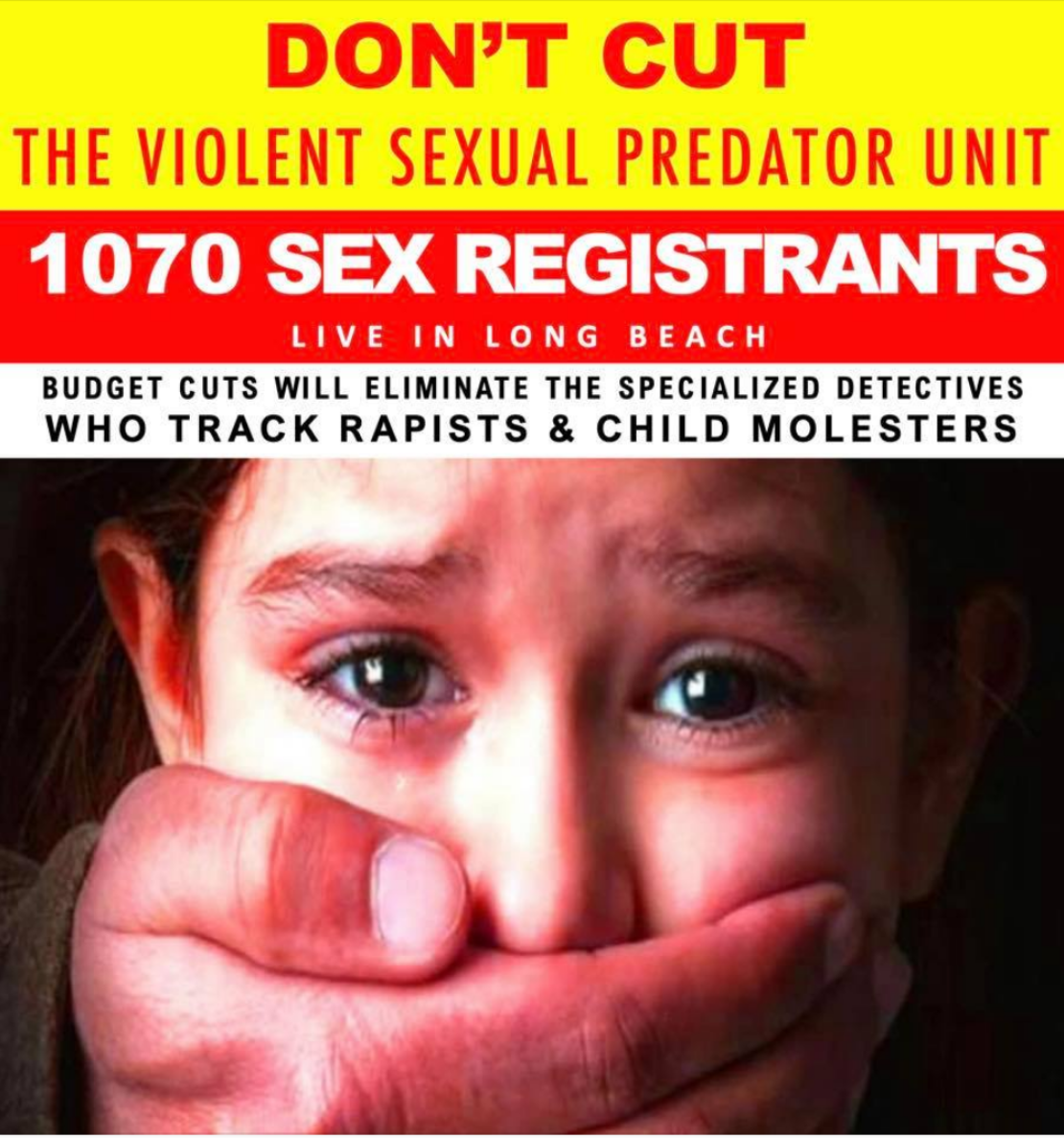 The Police Officers Association posted this picture on its Facebook page.

Of the 800 sworn officers employed by the police department, that’s your only option? We find it hard to believe, under any scenario, that sexual predators will be running wild in the streets.

The other topic of conversation Tuesday was a 100-page plan for racial reconciliation, which came about after thousands of people marched in the streets calling for police reform over the last two months. Of the more than 400 people surveyed for the reconciliation initiative, 53% said defunding the Long Beach Police Department is a top priority.

The public wants big change, not nibbling around the edges of an imperiled budget. And it’s not City Manager Tom Modica’s job to initiate change in the city; it’s his job to implement the will of the council, and the council Tuesday did little more than rope-a-dope around the central issue, thanking commenters for their interest and then bravely moving ahead and doing nothing.

We understand the police department budget hasn’t yet officially come up for review by the City Council; it is scheduled to be discussed on Aug. 18.

When it does land before the council, we presume we’ll see the real outrage. Or will it just be the same council listening to a funny noise in the engine, hoping to the car gods that it’ll fix itself?

The big news this week was of course the announcement that California Sen. Kamala Harris will be Joe Biden’s running mate. We’re not going to weigh in on presidential politics; that’s beyond our expertise. But the decision may have a significant downstream impact on Long Beach.

Mayor Robert Garcia has already been named by national media as a top-tier contender for Harris’ potential Senate vacancy. Becoming a U.S. senator would be a big leap for Garcia (who was described by the national publication Politico as “one of the nation’s most prominent LGBTQ officials”).

But Garcia, who snagged a speaking role at next week’s Democratic National Convention and had endorsed first Harris then Biden, would at least be a contender for national office (our over-under has him as undersecretary of education, though he’s more qualified than the current head of education, Betsy DeVos).

That would create a big-ticket vacancy in Long Beach, and we predict, given the city’s budget woes, the council would suspend the city charter and wait until Garcia’s term is up in 2022 to let voters decide who should be mayor.

In the interim, the vice mayor—a largely ceremonial role selected by the City Council from among its own members—would step into the acting mayoral role. Whoever holds that post would have a definite advantage in two years running as an incumbent.

Currently the position is held by Councilman Dee Andrews, who will be lucky to hold onto his council seat in November, much less run for mayor. The new vice mayor will be selected after the Nov. 3 election.

This is going to be one to watch. More to come next week.

Yet the Spanish language translation on Tuesday mixed up the two during, of all topics, discussion of the city’s plan for racial reconciliation.

One of the easiest ways to rectify injustice toward people of color is to ensure that all people can actually understand what’s being said by those in charge.

After pleas by advocates, the city finally started providing translation services to those who speak Spanish, Khmer and Tagalog.

Gaby Hernandez, associate director of the Long Beach Immigrants Rights Coalition, told us that less than 50% of what people said at Tuesday’s meeting was actually translated. Aside from the translator saying “LAPD” instead of “LBPD,” the system used by the city summarizes comments, rather than translating them verbatim.

And, perhaps the biggest problem, the instructions for getting into the translation system itself are only provided in English.

How are non-English speakers going to know all the important stuff from council, like our esteemed elected leaders chatting with joggers, sitting in hot tubs and ordering food from drive-thrus during meetings?