The final component of the overhaul to the Long Beach Civic Center could finally move forward next week, but it will require the City Council to approve a potentially risky agreement that relies on tax-exempt bonds to pay for the purchase and development of 580 residential units on the “Midblock” site.

The Midblock is currently home to what remains of the old City Hall building that was abandoned when its replacement opened in 2019. It could be the future home of two eight-story buildings with 290 rental units each, some of them being designated for affordable housing.

The company developing the Civic Center site, Plenary Properties Long Beach LLC, would handle the construction, but it would be paid for through a complex financial deal that’s meant to shield the city from liability while relying on public funding.

Under the plan, the City Council would enter into an agreement where the California Community Housing Agency would issue $490 million in tax-exempt bonds to buy the land and develop the Midblock site—similar to a deal it approved last year with the Oceanaire development Downtown.

The agency, a joint powers authority formed by state and local governments, would own the building while Plenary manages the project.

Greystar, the same property management company overseeing the Oceanaire, would then manage the two 290-unit buildings that will include ground-floor retail space. Once those units are filled, the rent they generate would cover the bonds and any other fees and taxes that need to be paid.

The financial structure is intended to shield the city from any liability for the bonds while providing financing for Plenary to build the project. However, deals like this have proven to be risky because they depend on economic stability for decades; in this case, the 40-year lifespan of the bonds being repaid by rent.

If, for any reason, the economy is upset by factors like inflation or the units aren’t leased to a point where the rents could sustain the bond repayments, the property could be sold to cover the remaining costs of the bonds. Such a sale, however, could jeopardize the affordability of the units, which is one of the reasons for the city to approve the deal Tuesday night.

Long Beach would serve as the host for the project, but unlike the previous Oceanaire deal, where the city relinquished property taxes over the next few decades, it will receive its portion through a new “host fee.” Property taxes are the city’s No. 1 source of revenue for its general fund.

The “host fee,” which in this deal would be about $650,000 annually, was part of a raft of suggestions reviewed by the City Council last week when it voted to move forward with a “Middle-income Housing program” that would mirror the Oceanaire deal but with additional safeguards to help prevent the financing structure from failing, something that has happened with similar projects across the country.

Those protections included having the bonds structured so that incomes derived from rents could cover principal and interest, tying rents to state markers for affordability, locking units into a 55-year covenant and adding the host fee, which would ensure the city gets its cut of property taxes.

Long Beach Development Services spokesperson Richard de la Torre said that the fee will not be passed onto renters but it will be up to Plenary to decide how it wants to pay it to the city.

Other taxing agencies like Long Beach Unified School District and Long Beach City College will lose over the next 40 years. The estimated loss of property taxes is projected to be $3.6 million in the first year for all taxing entities.

For LBUSD ($943,000) and LBCC ($266,000), those sums aren’t expected to affect their annual budgets as they will likely be backfilled by the state, according to spokespersons from both institutions. 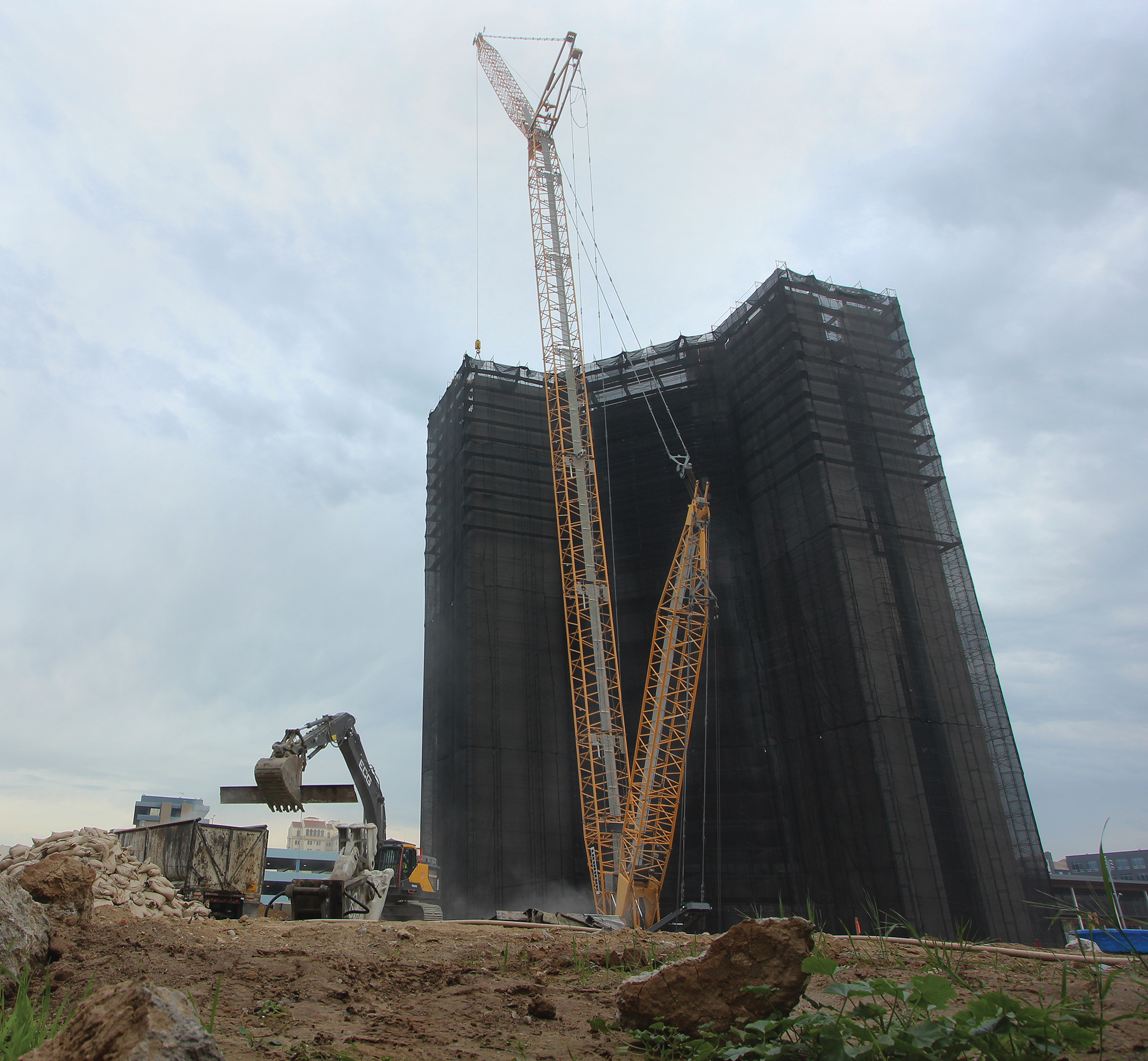 Who will be able to afford to live in the new units depends on what definition of affordable you use.

There are two approaches to calculating the area median income in California. The state’s Department of Housing and Community Development uses federal data and is lower than those set by the Tax Credit Allocation Committee, known as “TCAC income limits,” which use different calculations to arrive at larger area median incomes that result in higher monthly rents.

The difference in qualifying incomes for a two-person household between the state ($64,000) and TCAC ($94,600) limits is significant.

The draft middle-income housing program that the City Council moved forward with last week suggested that rents be tied to the state’s limits and that “some” of the units in a project could use higher income limits at the council’s discretion. The Midblock site would have nearly 80% of the rents based on the TCAC calculations.

When asked why the city is allowing such a large portion of this project to use the higher rent limits, De la Torre said the city balanced the interests of future residents with allowing a viable project for the investors.

“On any agreement, the city enters into, it is important to understand the negotiation begins with the applicant’s right to develop the project and charge market rents with no cap or AMI restrictions,” De la Torre said in an email. “The inclusion of rent controls at any AMI level is an improvement from the baseline and improves affordability in the city.”

The lower monthly rents will be reserved exclusively for studios ($1,442) and one-bedroom units ($1,655) while units using the TCAC median income limits will cost significantly more, according to an analysis provided to the city.

A one-bedroom unit will cost $2,460 per month with two-bedroom ($3,063) and three-bedroom ($3,389) units coming in under market value but more than some of the Oceanaire units, which have been criticized for not being affordable.

Because of the differing rent structures, only 120 out of the 580 units will count toward the city’s Regional Housing Needs Assessment goal of creating 4,158 moderate-income units over the next eight years.

While the deal does have some protections in place that the Oceanaire deal did not, an analysis by a city-hired consultant noted that a deal involving bonds that span 45 years still has many of the same risks.

“Because it is highly sensitive to market conditions over a generation. Small variations to the current assumptions of rent growth and vacancy have the potential to dramatically reduce—or increase—the surplus sale proceeds,” the analysis said.

Fees collected by Plenary and others over the life of the bonds are also high compared to typical real estate transactions, the analysis said, pointing out that no cash equity is involved in the project. The fees reduce the project’s ability to deliver more affordability.

The city could sell the building, with a likely scenario being at year 40, according to the analysis, but how much the building could sell for would depend on a number of factors including if the city sells it for market rate, which would likely end the affordability of most units, or sells to a non-profit that would preserve affordability but also lower the city’s gains.

The $533 million Civic Center project approved in 2015 included a new main library, a new headquarters for the Port of Long Beach, a renovated and repositioned Lincoln Park and the Midblock, which was supposed to include a boutique hotel and housing but has sat undeveloped as multiple project deadlines have lapsed.

Developing the Midblock has been on hold as Plenary has failed to find someone to buy the property and develop the two-building residential centerpiece of the project.

While the demolition of the old City Hall is expected to be completed by spring, it was originally scheduled to be done in March 2020 with Lincoln Park scheduled to open in November 2020. The park is still not complete and Plenary could now owe the city damages for not meeting the September 2021 completion deadline.

The City Council voted to speed up demolition of the old City Hall after it became a security issue and in that deal pledged $1 million of the $7.3 million Plenary owes it when it sells and develops the Midblock site. Another $14 million from the sale was supposed to go toward the construction of Lincoln Park.

The city had previously said that if Plenary did not pay the city for selling the Midblock site the city could hold onto the site as collateral. Former Public Works Director Crag Beck said in 2020 that the site had been valued at around $50 million.

De la Torre said that the money owed to the city would be triggered by any transfer of the property.

If the City Council approves the deal Tuesday, financing could be secured as soon as April and construction could be done by October 2024.

Old City Hall demolition expected to be complete by next year