Long Beach is expected to take a closer look at an innovative zero-emissions cargo transportation system that could reduce pollution and speed up goods movement at the Port of Long Beach—but it would require the city to issue hundreds of millions of dollars in bonds.

Known as a “Freedom Village,” the proposal would involve creation of an elevated magnetic levitation system that would move cargo containers from the port onto a futuristic rail system that could be suspended above existing roads.

The rail system could reduce annual truck trips on the 710 Freeway by 30,000 per day, according to a white paper from the Infrastructure Funding Alliance, a nonprofit group that has pitched the idea to Long Beach port and city officials. It would use similar technology already in use in commercial rail systems in Asia.

The Long Beach and Los Angeles ports processed a record 20 million container units in 2021, with ships anchoring offshore a common sight as they waited to be unloaded. Federal and state legislators have pledged to invest in port complexes to speed up goods movement.

“The bottlenecks brought on by the pandemic and the cost increases that are now resulting from what is happening in the supply chain ought to be enough of a signal that the current system needs to be altered,” said Mark Pisano, president of the Infrastructure Funding Alliance “This is a vehicle to alter the current system.” 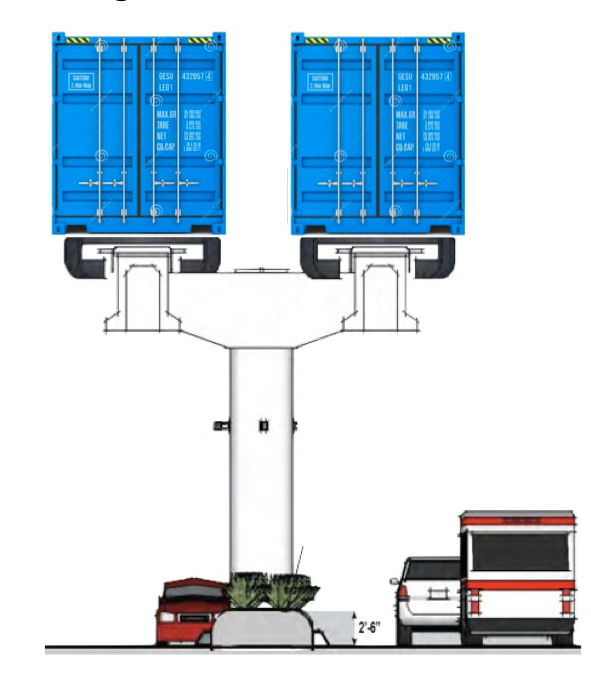 A rendering from the Freedom Village white paper shows an elevated track where cargo containers are transported using magnetic tracks.

Pisano, who previously was the head of the Southern California Association of Governments, added that the current freeways were not designed to handle the volume of truck traffic now present at the ports.

The City Council will vote Tuesday night on whether to dedicate more resources to studying the idea, with multiple committees holding public meetings and city officials gathering more details on financing, how the project would work and how it will affect jobs at the port.

“We want to look at the pros and the cons,” said Councilwoman Cindy Allen, who’s requesting a deeper look into the idea. “I think that’s the right first step at this point and it will allow us to have additional information and analysis of any specifics of the project.”

Allen said she’d want to have at least three community meetings to gauge interest from the public while the city examines if it has an interest in pursuing the project.

How does it get paid for?

Freedom Village would come with an estimated price tag of over $500 million if all phases of it are implemented. Pisano said his group would pursue federal and state grants, but they don’t want to bet the future of the project on funding that may not materialize.

Pisano is confident that the project could pay for itself between fees that would be charged for cargo containers to use the aerial transport system, the sale of excess energy created and stored in the battery cells that could also be used to provide power to the port and the potential sale of land that is freed up by removing utility lines that currently send power to the port.

The financing district could choose to allow part of property taxes within the financing district to be used as a source to help pay back the bonds, but Pisano said that is not currently in his group’s proposal. However, the white paper did note that if the city chose to include the city’s central business district in the footprint, the combination of reduced emissions and truck traffic could result in a substantial increase in assessed land value, which the city and the district could benefit from.

Allen said she was concerned about the city having to forfeit property taxes to help the project along, but said it was time to start making bold moves on pollution reduction on the west side of the city. Allen, a breast cancer survivor, pointed to her own upbringing in West Long Beach and linked it to her cancer, which she said was not hereditary.

“We’ve got to start making steps to make our local health benefits better for our frontline communities,” Allen said.

What are the benefits?

The white paper highlights the project’s potential to both speed up cargo movement while reducing pollution and simultaneously creating excess energy, which can be stored and used for on-dock purposes like powering ships or distributed for use in electric vehicles.

It touts an ability to initially move 1,200 containers per day on its system, with the potential to eventually move up to 10,000 containers to and from the port complexes daily once the project is fully built out.

That reduction in truck trips (10.8 million annually according to the paper) could dramatically reduce pollution while freeing up some land along the Los Angeles River for open-space or housing production.

The annual emissions reductions cited in the paper are substantial, with over 240 million kilograms of carbon dioxide and other pollutants like diesel particulates potentially being removed from the region’s air.

Pisano said that while the bonds would be issued to help fund the project the revenues from rents, charges to use the cargo transportation system and the sale of energy production that could be generated through the project’s use of battery storage technology. Superconducting tape that will generate the energy is proposed to be incorporated into the overhead cargo transportation system.

The ability to finance the project was made possible through recent state legislation that allows elected bodies like a city council or board of supervisors to create enhanced infrastructure financing districts. The districts can issue revenue-backed bonds and also give up its rights to certain tax revenues for as long as 45 years.

The most recently adopted law, Assembly Bill 313, allows these districts to be created to pay for things like highways, water treatment facilities, libraries, parks and port infrastructure among other uses. AB 313 would also exempt Long Beach Unified and Long Beach City College from losing their share of property taxes within a financing district.

Long Beach has entered into similar deals in the past few months to help finance two housing projects Downtown that sought to create more affordable units for middle-income households. Those deals could see the city eventually buy back the properties over the next few decades, and one deal was written so that the city did not forego its share of property taxes over the life of the agreement.

Pisano said the project would operate like a public-private partnership where it would be owned by the newly formed district but have an operator that would be decided through an RFP process. That could be the port, a private entity or a non-profit organization, Pisano said.

Editors note: The white paper proposes to remove 30,000 daily trips from the freeway. A previous version of this story said those were annual trips.

Why ships keep stacking up off the coast of Long Beach