The once-doomed and sadly shuttered Petroleum Club that has operated since 1958 has received a surprising reprieve and is on the verge of a reopening and, perhaps, a renaissance.

In March 2019, the Petroleum Club of Long Beach, located at 3636 Linden Ave., was helplessly standing before the wrecking ball. It was, in effect, blindfolded and enjoying its last cigarette before it would be razed to make room for a tower of condominiums.

And at that point, Long Beachers had, apparently too late, suddenly fallen in love with the place—its kitsch, its “Mad Men”/Palm Springs vibe, its retro opulence, its kool kat Rat Pack nostalgia, its still-palpable memories of when its Linden Lounge circular bar and its Red Room restaurant were packed with filthy rich oil tycoons and their trophy wives drinking highballs and dining on prime rib while their kids frolicked and splashed in the pool by the patio.

Longtime members and third-generation young residents wanted to rescue the club from ruin and ignoble condo development. A month after it closed, the preservationist group Long Beach Heritage hosted a wake of sorts as part of “This Place Matters,” a national event showcasing important and historic buildings throughout the country.

It was too late. The deal was done.

But the deal was no match for the troubling year of 2020. The coronavirus brought construction in town to a whiplashing halt and the would-be developers had to send the wrecking ball packing and try to figure out what to do with the J. Richard Shelley-designed club, long admired for its mid-century design and its use of rough-cut stone facade.

The solution: Turn back the clock and let the Petroleum Club get back to what it was born to do.

Its owners, who include Long Beach Realtor Bill Larson and his partners, have teamed with local events and catering company, The Grand, to offer the space for special events and, eventually, open it up to a club and/or pool memberships, as well as for public and community events, such as those that were offered before the club’s closure last year.

Right now, the club is being restored to its former glory, says Dan D’Sa, vice president of The Grand. “We pulled carpet, painted it, doing a hard deep cleaning. I wanted to preserve the integrity of the club and not change things. It would be like taking over Joe Jost’s and changing it. It would be horrible. So we’re trying to preserve its history.” 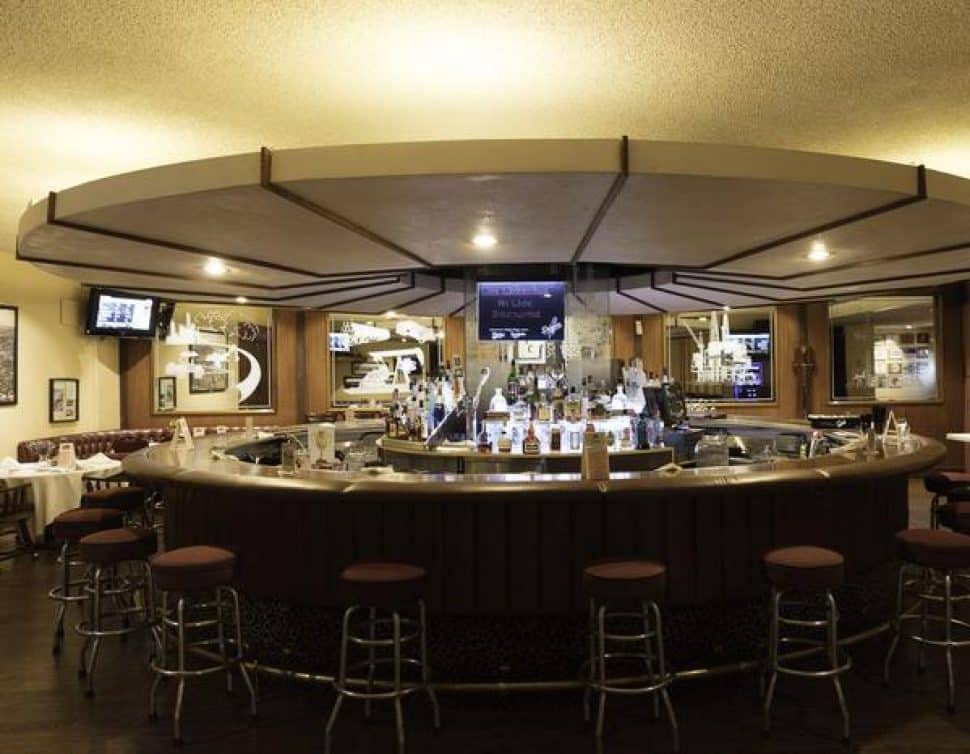 The circular bar at the Petroleum Club’s Linden Lounge was a hot spot for members. Courtesy photo.

It won’t reopen with a gala grand opening, said D’Sa.

“It won’t be suddenly the new hot place in Long Beach,” he said. “We’re going to slowly let it grow, just let it mature by itself.”

D’Sa said the club would initially do some social events, then do first or last Thursdays prime rib luncheons in the Red Room, limited to 75 meals, “and let that build.”

No date has been set yet for even a soft opening, said D’Sa. “I think we’re probably a month and a half to two months from opening the doors and sharing it with people,” he said. “We’re taking our time and doing it right. But, if a vaccine came out we could be open within two to three weeks.”

The Bixby Knolls Business Improvement Association had been availing itself of the Petroleum Club in its waning days, sort of re-discovering the place for its mid-century look and feel. BKBIA executive director Blair Cohn held several regular events there before it closed, but he’s anxious to fire up his events at the space.

“We’re thrilled to death that the club and its building are being saved and given a second life,” said Cohn. “When it was sold we talked to the new owners and we really tried our best to get them to reconsider, but they were going to develop the space. Then COVID hit and that changed their plans.”

Now, he said, the plan is to work with the club and The Grand to work on various ways to use the facility, including a community pool membership in the summer and whatever else they can do, most particularly the tried and true events the association held at the Petroleum before it closed, including the Good Spirits Club, dinner nights, the Literary Society and Knights of the Round (Turn) Table.

“We’re poised,” said Cohn. “We want to go back and help activate the club.”