Long Beach over the past few days has been reeling from a massive protest that was overtaken by violence Sunday night when businesses were looted and vandalized—overshadowing the coronavirus health crisis that has plagued the city and nation for months.

And as the city cleans up from the events of the week, hospitalizations from the coronavirus pandemic have been dramatically revised upward over the past 10 days.

On May 24, city health officials initially reported 62 people had been hospitalized for the virus. That number, revised based on new information from hospitals, was actually 91, according to the city’s data dashboard.

Hospitalizations—what officials have said all along will be a key indicator of how fast the city reopens—averaged in the high 80s from May 24 to May 27 despite originally reported numbers in the low-60s. 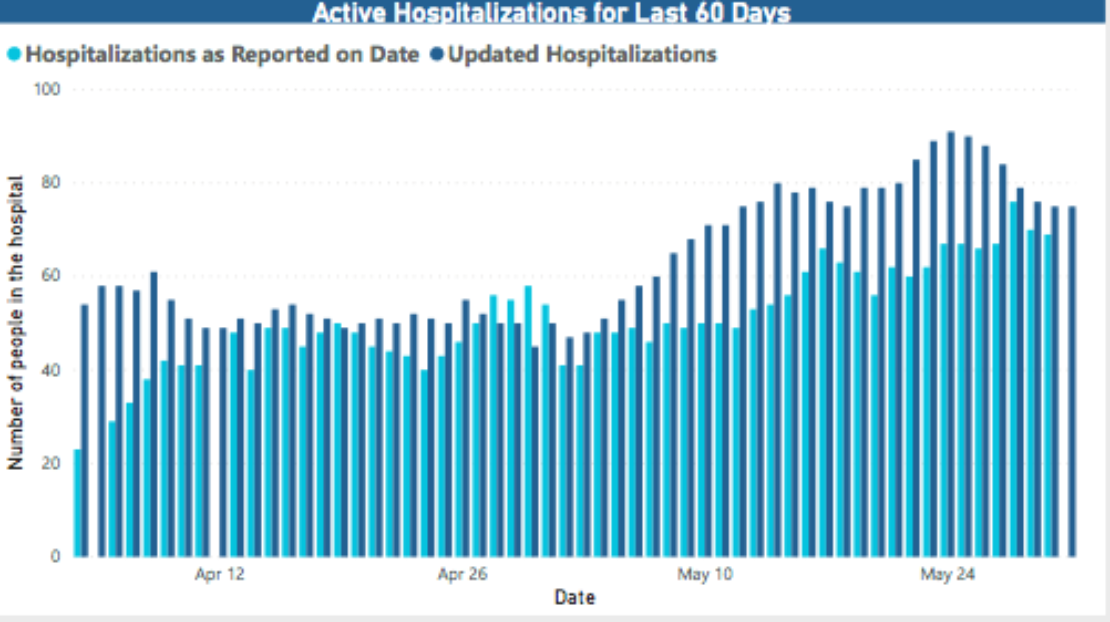 On Monday, the city reported 75 people were in the hospital for coronavirus, but that number could be revised as has been the case nearly every day.

At a Monday night press conference, the mayor said the city can’t lose sight of the health pandemic amid the drama of the weekend’s events.

“I am very concerned about what our numbers are going to look like in the next few weeks,” Mayor Robert Garcia said after more than 3,000 people marched through Downtown Sunday and police spent the following hours dealing with looters and vandals.

Garcia implored residents to continue to take precautions against the pandemic because people are still dying across the city and country.

The mayor said in early May that the pace of reopening Long Beach’s economy would be guided by the number of people hospitalized for COVID-19, as the focus since the pandemic began has been ensuring that the health care system is not overwhelmed.

Long Beach, in a joint application with Los Angeles County on Friday, was granted permission by the state to reopen dine-in service and hair salons based on a range of data, the first being whether counties can show that they have the capacity to handle and contain a surge in new hospital patients.

The state requires no more than a 5% average increase in day-over-day in hospitalizations over a 7-day period.

The county, which included Long Beach in its application, reported that 1,443 people were hospitalized as of Sunday, May 24, a number that decreased by about 1% since May 18, according to the application to the state.

Long Beach and Pasadena—both of which run their own health departments—teamed up with LA County to apply for the variance together because the application was stronger as a regional package, officials said earlier this week.

On Friday, the city’s health officer Dr. Anissa Davis said the city is still not at the point where hospitals are overwhelmed.

“The trend of hospitalizations is concerning, but we haven’t seen a big spike,” Davis said at a media briefing. “We are watching that closely.”

City officials on Friday said local hospitals are currently at about 50% to 60% capacity; if that number rose to 70% to 80%, the situation would be different.

If the city hits that point, “no one should complain” that the city isn’t loosening restrictions further, Garcia said Friday. “It means we’re stopping immediately or we’re going backwards.”

“If you want your fitness studio or nail salon to open up, put on a mask, wash your hands and stay home when you can,” he said.

Garcia said city officials have had the difficult task of balancing valid economic worries—more than 25% of the city’s workforce is now unemployed—with human life and public health, the “most important factors,” he said.

“How you move forward with those factors guiding our process is really hard,” he said.