A large group of Long Beach Unified School District parents have been calling on the district to reopen its campuses, and, recently, they’ve been joined by a few LBUSD teachers who say the closures are disproportionately hurting their most vulnerable students.

Cubberley Elementary School teacher Debi Bober gave an emotional presentation to the LBUSD Board of Education at its meeting this week. Bober, one of the 2018 LA County Teachers of the Year, said that she’s been heartbroken by the plight of one student in her class this year, whom she gave the pseudonym Johnny.

“This could be any classroom or student or teacher,” she said. “He comes to school on Zoom, he logs in late, there’s no one there to help him. He’s in his bed. Sometimes the video or microphone works, sometimes it doesn’t. His parents are in the background yelling and he’s going from room to room to find somewhere quiet, he’s losing his connection as he’s moving rooms.”

During a post-class Zoom meeting with the student, he reportedly told Bober he had the lights off in his room because it was too hot and the house didn’t have air conditioning.

“There’s no ceiling fan in his room, there’s a hole in the ceiling,” said Bober. “This is a kid that I’m failing, because I can’t fix that. I’m giving 100%. I’m fine with Canvas and Zoom, I can do it—but I cannot meet the needs of my students right now. I’m failing my students and I’m trying my hardest. … If he could come into my room, I could help him.”

Amy and Scott Allen, teachers at Naples Elementary and Millikan High, also gave speeches noting the struggles their students and their own children have had. Amy said that the family has two kids going back to school in a hybrid model soon and that she feels bad for her students’ families who don’t have the same chance.

“I want my kids to come back. I want these families to have what I have, and that’s that spark back into my kids’ eyes,” she said.

There were parents pleading with the board as well, including Mike Gallo and Natasha Garcia. 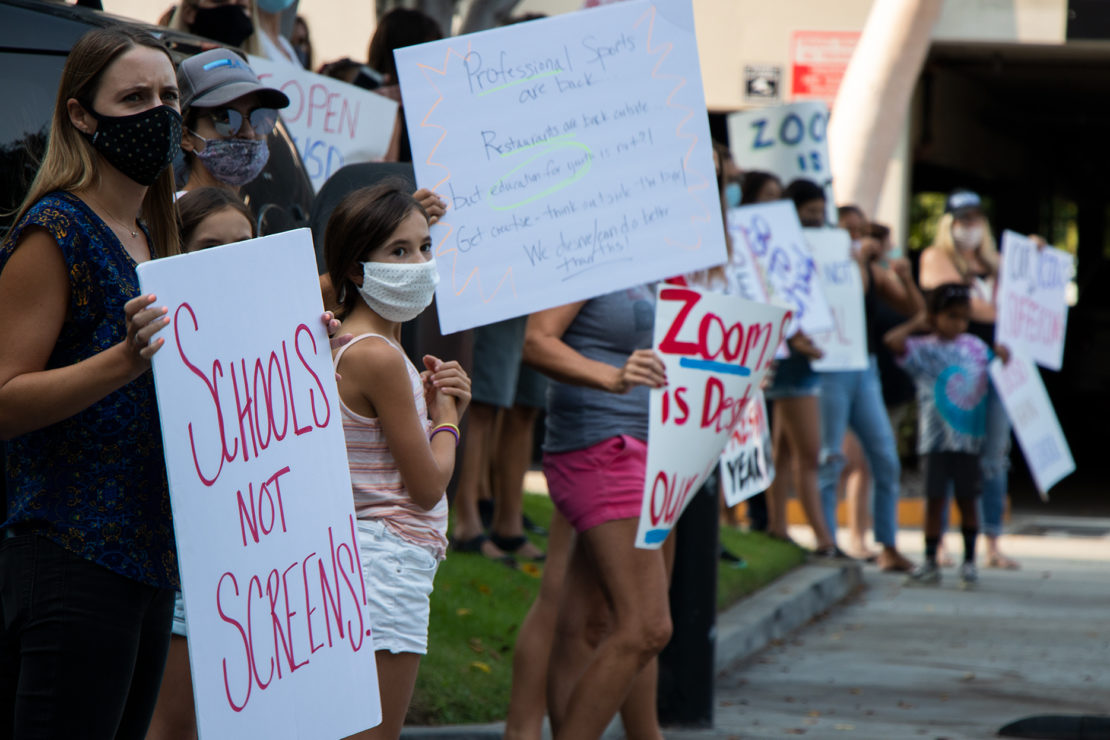 Parents and their children hold signs outside the Long Beach Unified School District headquarters as part of a protest calling for an in-person classroom option, on Wednesday, Sept. 16, 2020. Photo by Crystal Niebla.

Garcia noted that her two high school students have been reporting migraines at the end of the school days after hours logged onto the computer.

Because of the coronavirus, the LBUSD has said it will remain in virtual learning mode until at least Jan. 28, the end of the first semester.

“Not January 28, the sooner the better,” said Gallo. “My kids are falling behind.”

The Facebook group Reopen Long Beach Schools, which has more than 1,700 members, also staged a protest outside the Board of Education meeting, with honks audible from inside.

The Reopen Long Beach Schools group says they are planning a “Zoom out” on Monday, Oct. 5, the date that schools were previously scheduled to reopen, with their students not logging on for the day’s virtual learning.

In response to the parents and teachers who asked for a reopening, Board President Diana Craighead spoke passionately on the subject:

“We would all much prefer having the kids in classrooms with teachers, that’s at the heart of what we do,” she said. “That’s what we are working towards. The reality of the situation is we are still in the middle of a pandemic. … It’s very frustrating.”

Craighead, who represents East Long Beach, said she knows many of her constituents have been discouraged by watching nearby Los Alamitos Unified open while Long Beach is still in virtual learning. She stressed that that’s a county-level decision.

“Sometimes when people come speak they make it sound like we’re choosing not to bring kids back,” she said. “At this point we don’t have a choice, we are a part of Los Angeles County. Please wear masks so we can bring the kids back—we’re all tired of this, nobody is comfortable with this situation.”

However, at least some of the next steps are in the district’s hands.

Editor’s note: An earlier version of this article incorrectly stated that the Allen children attend a private school. They’re able to return to their public school because the family lives in Orange County, according to Amy Allen.