LBUSD had 10 days to move classes online; they’re about to be put to the test • Long Beach Post News
- ADVERTISEMENT -

Over the last two weeks, the Long Beach Unified School District has scrambled to transform its 80 separate campuses into one online hub.

That breakneck pace of change was extraordinarily different for a massive educational bureaucracy that serves 70,000 students, making it the third-largest district in the state.

By the time the LBUSD announced on March 13 that its campuses would close for several weeks to slow the spread of COVID-19, the transformation was already taking place.

From a central hub, students can click on their schools and then look up individual teachers to access a virtual classroom.

How LBUSD students can get free Chromebooks, internet and meals

With California’s entire school system in flux thanks to shutdowns, LBUSD students will only be given ungraded assignments for the time being while local officials wait for more guidance about what happens next statewide.

In a demonstration of the buy-in around the district, the support person listed for each school’s Home Learning Opportunities page is that school’s principal.

This transformation to online learning required 10 days of nonstop work, according to LBUSD Superintendent Chris Steinhauser and Deputy Superintendent Jill Baker, who’s been in charge of the instructional aspect of the change.

“My thanks to our staff and all of our workers,” Steinhauser said at last week’s LBUSD Board of Education meeting, where the Home Learning Opportunity Plan was announced. “It’s remarkable what’s happened.” 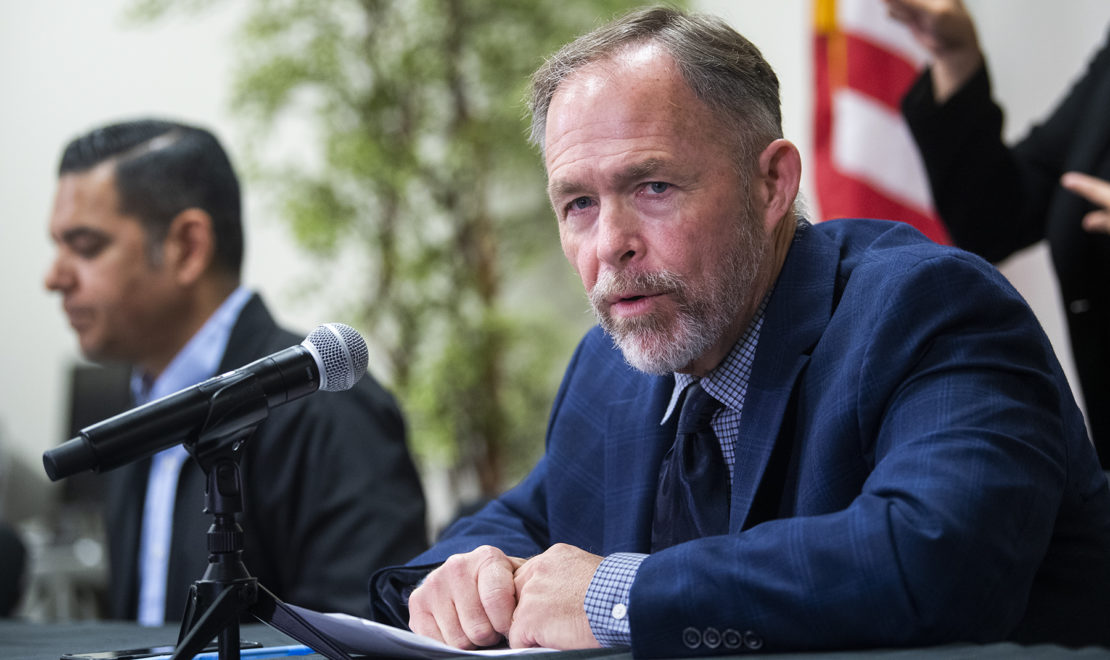 The LBUSD has ramped up its efforts to educate through technology in recent years, and it’s boasted that it has a Chromebook laptop for every student enrolled in a school. But that education has all happened on site, in part because 12% of youth in Long Beach don’t have internet access at home. The district has ordered a truckload of home-internet hotspots, so that students who bring Chromebooks home to houses without internet will have the ability to connect.

Because of that digital divide between the city’s most affluent and most impoverished students, there hasn’t previously been an effort to do instruction from home.

Achieving this week’s goal meant changes both large and small: The carts used to store Chromebooks on campuses had to be dismantled in some cases because they were constructed specifically to prevent people from taking the chargers and laptops out and walking away with them.

Effort has also been put in to serve students who still cannot or choose not to plug in to the Home Learning Opportunities website. District staff spent the weekend printing out thousands of pages to be boxed and distributed to the individual school sites, so that anyone who wants to pick up  work in person can still do so.

Rows and rows of boxes of printed-out material for students. Courtesy Jill Baker.

Another big change, besides how these assignments will be distributed and taught to students, is in how the district, school administrations and teachers have coordinated that process.

With social-distancing guidelines in place, almost all of those meetings moved to the online Zoom platform, and social media was filled with images of school leadership teams videoing each other over the weekend.

Within a few days, district leadership talked to school leadership, then school administration met with department heads and teachers. Those meetings all took place using a new platform, to discuss the process of converting the district’s entire function, if not its mission. It’s the kind of change that, under different circumstances, might have taken a few years to affect, instead of a few days.

“This is a whole infrastructure that came into place in the last two days,” Baker said. “We are trying to figure out how can families and staff access things in the simplest way possible.”

The district’s rapid change has left its employees and senior staff working long hours, yet obviously inspired about their mission.

“This reminds me of how Long Beach rallied after the earthquake,” Steinhauser said, referring to the 1933 disaster that destroyed or severely damaged most of the district’s campuses. “In all tough times, there are silver linings—we have to remind ourselves of that.”