There are less than two weeks left before the Long Beach Unified School District votes on which redrawn district map they will send to the City Council for approval, and the school board members want more community feedback before deciding.

The LBUSD created three possible maps to adjust how the district is split into five areas based on the 2020 U.S. Census data. Those maps, which govern which school board members represent which areas of the city, were presented at the Oct. 21 board meeting and were then made available on the LBUSD website where the public was encouraged to give feedback in English, Spanish and Khmer.

During the meeting Wednesday night, the LBUSD school board members expressed concern about the lack of educated responses. The public comment portion of the meeting put those concerns into stark relief. Fifteen community members took to the microphone for their allotted three minutes and only one of them talked about the redistricting maps. The vast majority of the other speakers discussed their displeasure with the district’s vaccine and mask rules.

Area 2 school board member Erik Miller specifically expressed concern about the fact that only one online comment came in a language other than English.

“I’m going to make the assumption that everybody who has responded is an English speaker and has no technological barriers to giving a response,” Miller said.

See the current and proposed maps below. Click each one to enlarge: 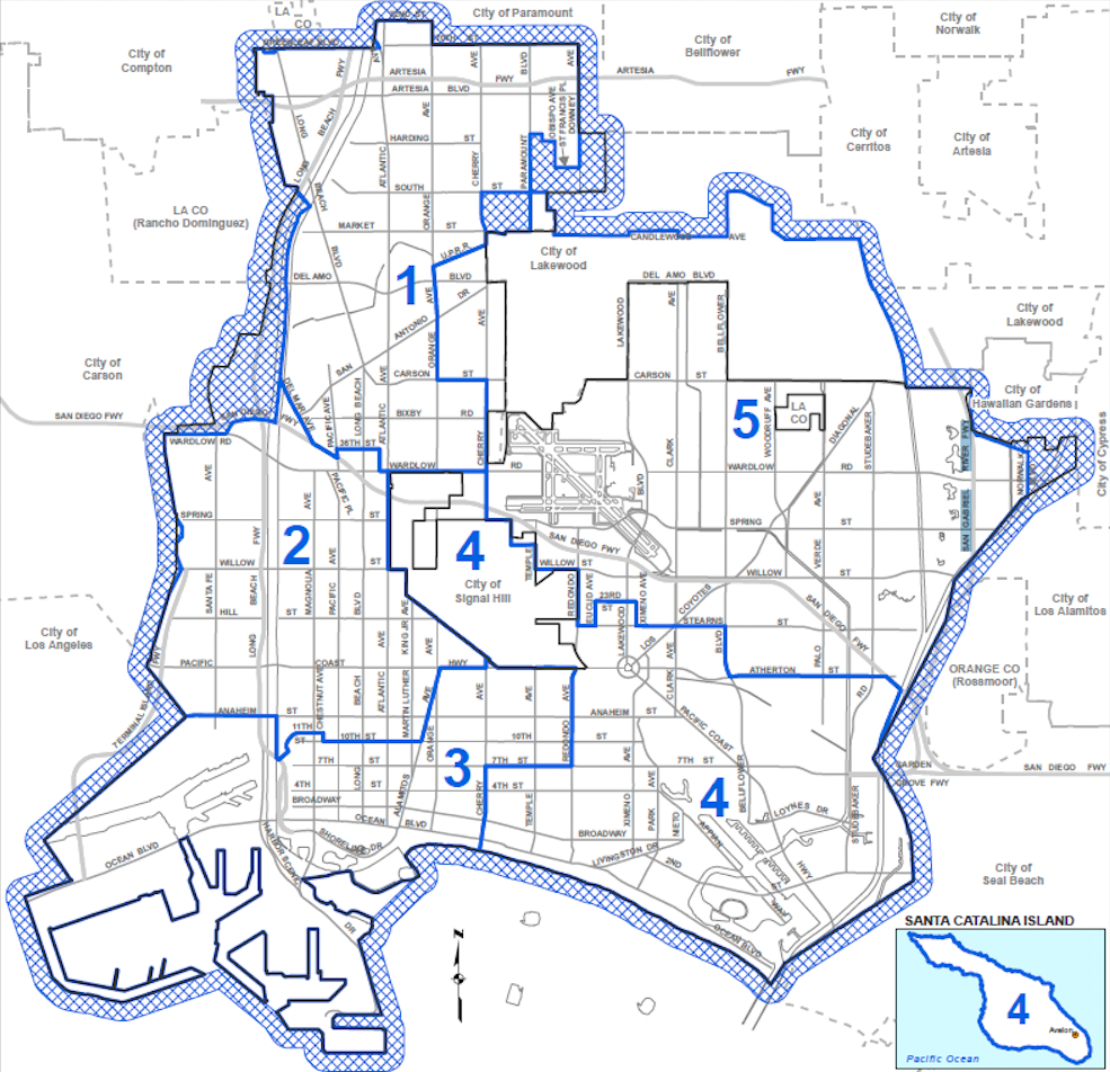 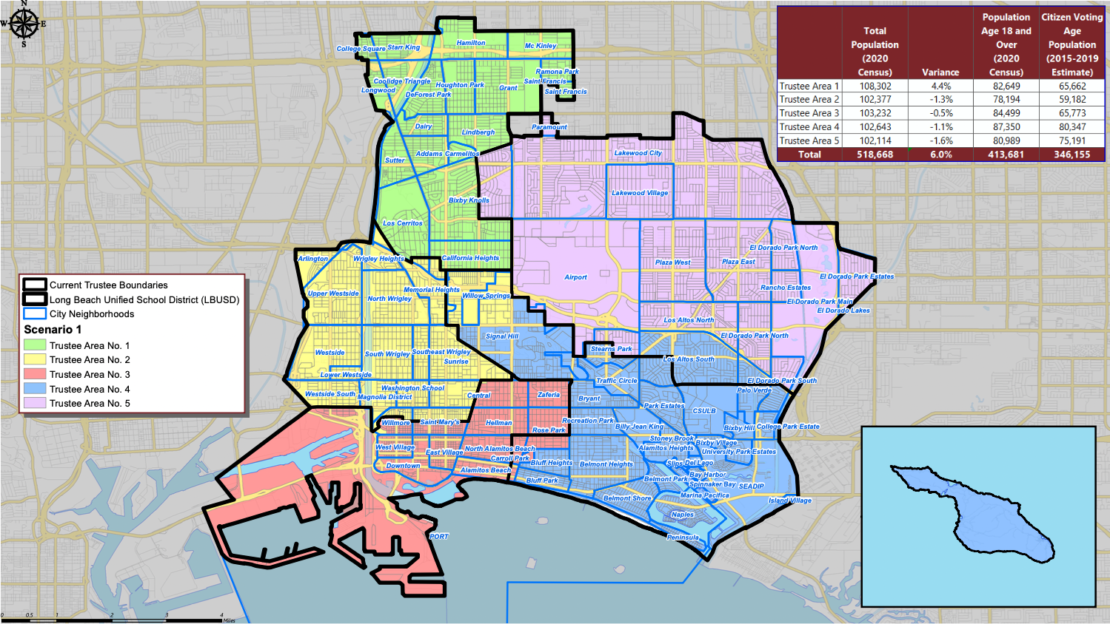 The first scenario proposed by a consultant to redraw LBUSD school board district lines based on new U.S. Census data. Courtesy LBUSD. 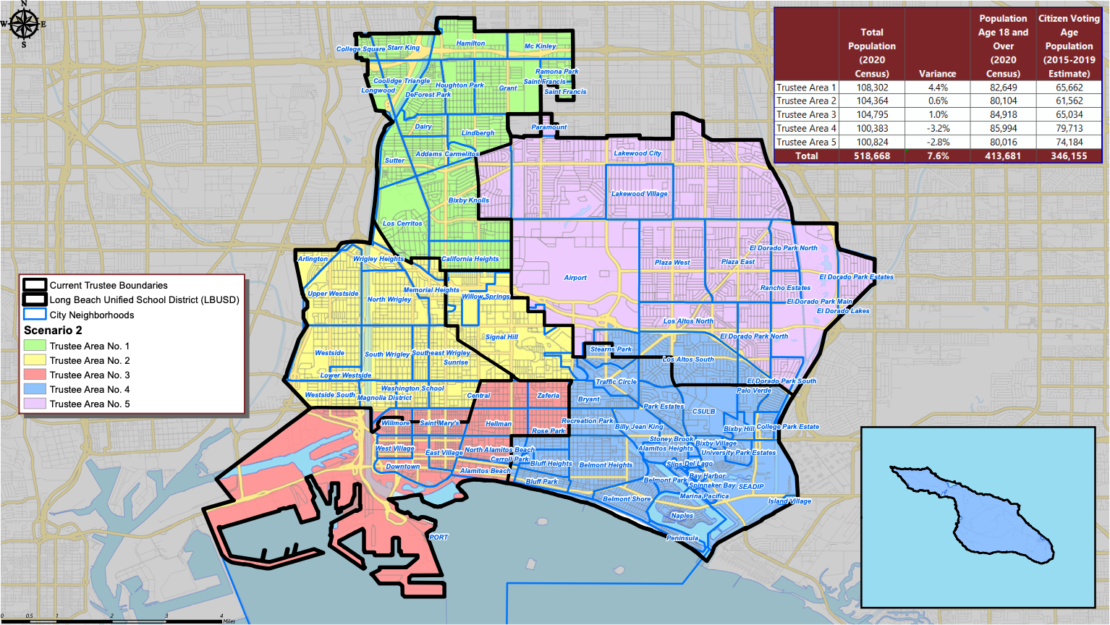 The second scenario proposed by a consultant to redraw LBUSD school board district lines based on new U.S. Census data. Courtesy LBUSD. 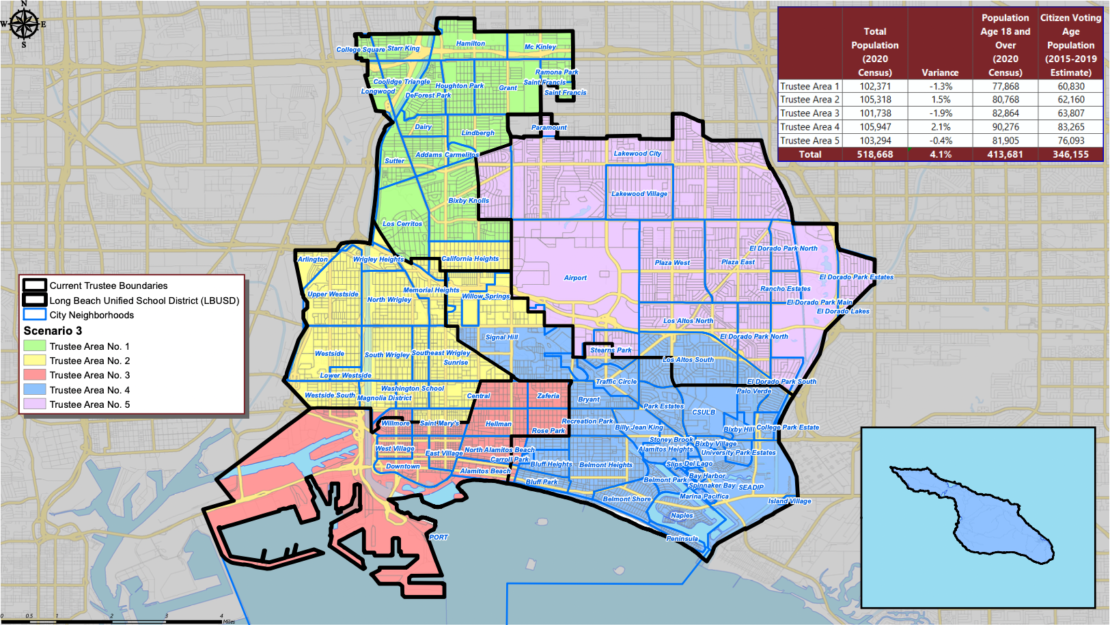 The third scenario proposed by a consultant to redraw LBUSD school board district lines based on new U.S. Census data. Courtesy LBUSD.

The LBUSD has disseminated information via mailers and information pamphlets handed out at community events in different languages.

Certain areas have different priorities when it comes to the new maps. Signal Hill residents, for instance, may want to avoid splitting the city among two districts. The redistricting process doesn’t affect what schools kids attend, but it does affect which school board race residents vote in.

The maps are required to be redrawn after the census to make a sure representation is proportionate. But, as the City Council’s current redistricting process has shown, it can be a tricky and emotional process that can split communities or affect which seats politicians can run for.

“In terms of population density, moving a line can mean 100 people or 1,000 people,” Area 1 school board member Megan Kerr said.

“I’ve made myself available and there hasn’t been much personal feedback,” Otto said. “Anybody I’m getting calls from are primarily interested in how it’s going to affect their kids and their kids’ education. … It doesn’t affect any decisions the district is going to be making about where people go to school. The school board is asking if this is fair, balanced and meeting the voting rights requirements. The things my area gains and loses seems acceptable in various scenarios.”

The information on the LBUSD website has been available since Nov. 8. The vote on the proposed maps will come during the Dec. 1 meeting after the district goes on Thanksgiving vacation.

You can weigh in on the proposed maps here.