A mentally ill man whom a Long Beach police officer repeatedly hit with a baton in February is suing the city, alleging officers wrongly arrested and beat him after bystanders misunderstood his erratic behavior and cries for help as aggression.

Eugene Martindale III was desperately seeking assistance during a mental health episode when a security guard Tasered him and police arrived to violently arrest him, according to Martindale’s attorneys, who provided a copy of the civil rights lawsuit they planned to file in federal court today.

The security guard and the Long Beach City attorney’s office both declined to comment. Police said in a statement that the incident is under review and a viral video of the beating only shows part of the story.

Diggs and Martindale’s other attorneys declined to say exactly what illness the 25-year-old has, but they said his episodes involve panic and anxiety attacks and sometimes delusions.

“Martindale is African American and has a mental disability which at times causes him to seek assistance from bystanders to call his father to pick him up,” according to the lawsuit, which notes Martindale doesn’t have a cell phone of his own. 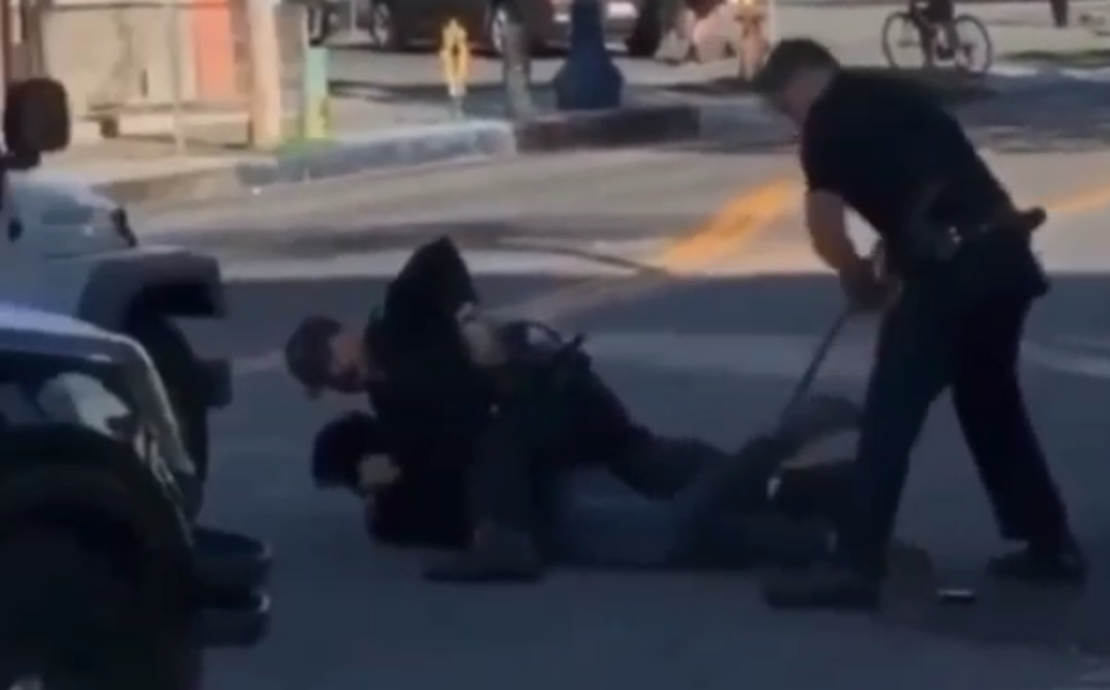 A screen capture of the video of Eugene Martindale III’s arrest in February 2020.

By the lawsuit’s timeline, Martindale’s beating followed a cascading series of misunderstandings that began around 3:15 p.m. on Feb. 15 when he walked up to a parked car outside of a 7-Eleven at Fourth Street and Atlantic Avenue.

As Martindale tried to get help from someone inside, a nearby security guard assumed he was trying to steal the car and yelled at him, according to the lawsuit.

Police say that as the incident escalated, Martindale was climbing on cars and trying to get into occupied and unoccupied vehicles, but his father contends this was misunderstood.

“He’s not a carjacker,” according to Martindale’s father, who said he’s gotten calls to come pick up his son before. “He’s not an angel, but he doesn’t even know how to drive.”

Martindale asked the security guard for help calling his father but he couldn’t immediately remember the phone number, according to the lawsuit.

The guard—who is also named as a defendant in the lawsuit—then tried to scare Martindale off by brandishing a Taser and using it on Martindale when he didn’t leave fast enough, court papers allege.

Frightened, Martindale reportedly tried to get help from a nearby parking enforcement employee, the lawsuit says.

As he pleaded for assistance—“Call 911, I need help,”—Martindale tried to open the door of the parking employee’s Jeep, according to the lawsuit. When Martindale reached into the SUV’s window, the 7-Eleven security guard ran over and Tasered Martindale again, his attorneys allege.

Soon after, four police officers arrived, responding to an urgent call for help from the parking enforcement employee. Martindale’s attorneys say he raised his hands, laid face-down on the asphalt and put his hands behind his back.

But police gave a different account. They say Martindale initially seemed to comply, but “began to thrash his body and resist” while an officer tried to cuff him. They also say Martindale grabbed the security guard’s neck as he was trying to help police gain control.

At that point, one officer began hitting Martindale’s legs “to gain his compliance,” police said in their statements.

A short 13-second clip of the baton-strikes was caught on video and widely shared on social media.

“I was sick to my stomach, I could hardly watch it,” Martindale’s father, who is also named Eugene, said of the video.

The family’s attorneys say this force was excessive, unnecessary and came without any warning.

In addition to at least a dozen baton strikes, the lawsuit alleges police put Martindale in a wrist-lock and used a carotid-control hold, which is intended to cut off blood-flow to the brain and has since been banned by the LBPD and the state following nationwide protests over the police killing of George Floyd in Minneapolis.

Police, however, said they tried to deescalate the situation but Martindale ignored their orders. Paramedics took Martindale to a local hospital and he was released the next day into police custody without “any significant injuries” from the beating, according to the LBPD.

Nevertheless, Martindale’s attorneys questioned why police felt so much force was necessary.

“Once again, we have an unarmed Black man, who was brutalized by law enforcement,” one member of his legal team, Toni Jaramilla, said in a statement. “For those of you who say, ‘you just have to cooperate with law enforcement if you do not want to get hurt,’ Mr. Martindale’s case shows that even if you cooperate, you place your hand in surrender position to show you have no weapons, you drop to the ground as told, you don’t resist, law enforcement may still beat you for no apparent reason … other than perhaps the color of your skin.”

Martindale’s lawsuit explicitly alleges he was subjected to such harsh treatment in part because of his race and disability.

It should have been obvious to police that Martindale was mentally ill, according to his attorneys. They argue police had no valid reason to think he was committing a crime: “Rather, he was a man in distress, searching for anyone to help him.”

Long Beach police have specialized teams of officers paired with mental health clinicians who respond to calls when available, something the lawsuit says didn’t happen in this case. But the department also trains its typical patrol officers to recognize when someone may be mentally ill.

“Not all people with mental illness are dangerous, while some may represent danger only under certain circumstances or conditions,” the department says in training materials presented to officers in the academy. “Some may be capable of going very quickly from a state of calm to being extremely agitated.”

The training says offices should “Always respond in a manner that is humane, compassionate, and supportive,” but it warns them against putting themselves in harm’s way in an unpredictable situation.

In practice, Long Beach police end up using physical force more frequently against mentally ill and intellectually disabled people than they do against the general population, according to a trove of demographic data the Long Beach Post obtained through public records requests earlier this year.

LBPD officers used force in only 0.68% of the 40,524 times they stopped someone in 2019, but that percentage jumped to 2.42% when narrowed to the 825 times officers stopped someone who was perceived to be mentally ill or intellectually disabled.

That disparity is even starker when taking race into account. Police used force against White subjects with mental illness in only 0.78% of stops. When the person was Black and mentally ill, that percentage jumped to 3.87%.

Police said the February incident ended with Martindale arrested on suspicion of attempted carjacking, but he was never charged with that crime.

Instead, he pleaded no contest to two felony counts of resisting arrest as part of a plea deal. By doing so, he avoided facing trial on additional charges of false imprisonment and interfering with a business that could have landed him in jail for almost nine years. He was ultimately sentenced to one year in jail and three years of probation.

At the time, Martindale’s father said his son had long been working through mental health struggles. The elder Martindale said his son went through a period of heavy drug use where he ended up in trouble with police, but he moved in with his father and had been clean and making progress for about two years before his arrest.

Jaramilla, the attorney, said that much of Martindale’s criminal background is a symptom of his mental condition.

“People need to see in context what that means,” Jaramilla said. “This is a mentally ill man who’s really loved by his father.”

After the viral video and his resisting arrest convictions, Martindale’s troubles continued. Long Beach police again arrested him in May, this time on suspicion of robbery.

Jaramilla said her firm didn’t represent Martindale in that criminal case, but her understanding is Martindale saw someone playing a guitar and wanted to play it too, so he took it. She said his illness can at times make him behave almost like a child.

Court records show Martindale eventually pleaded no contest in that case to a charge of assault likely to produce great bodily injury and was sentenced to two years in jail.

He is now getting psychiatric help in lockup, Jaramilla said.

Editor’s note: This story was updated with a more detailed account of Martindale’s arrest from police.