The Long Beach Independent Redistricting Commission’s first in-person meeting Wednesday at Cabrillo High School, meant to interact with residents of West Long Beach and other areas included in the city’s 7th District, drew just five attendees who were not media or city employees.

Former councilwoman Tonia Reyes Uranga, whose husband, Roberto Uranga, is the current representative for the 7th  District, was critical of the outreach the city has done in advance of the community meetings and the amenities that were missing from meetings, such as childcare services, that might allow others to attend.

“This is not representative of my community,” Uranga said, motioning to the empty seats in the auditorium.

The city has promoted the meetings through social media, inserts in utility bills and even bought space on billboards to announce that the redistricting process is underway. However, multiple members of the public complained of a lack of outreach, with some alleging that the inserts mailed to their homes had incorrect meeting dates.

A representative from the city could not be reached for comment.

A representative from Common Cause, a national organization that advocates for democratic reforms like independent redistricting commissions, phoned in to advise the commission that it’s not uncommon for multiple meetings in a given district to be scheduled if the first ones did not have a successful turnout of residents.

A second meeting scheduled for July 21 at 6 p.m. at Poly High School, is part of a series of educational meetings the commission has been hosting to inform residents about the process, expected timeline for new lines to be drawn and to show residents how to use online mapping tools to create their own district lines and identify communities of interest. 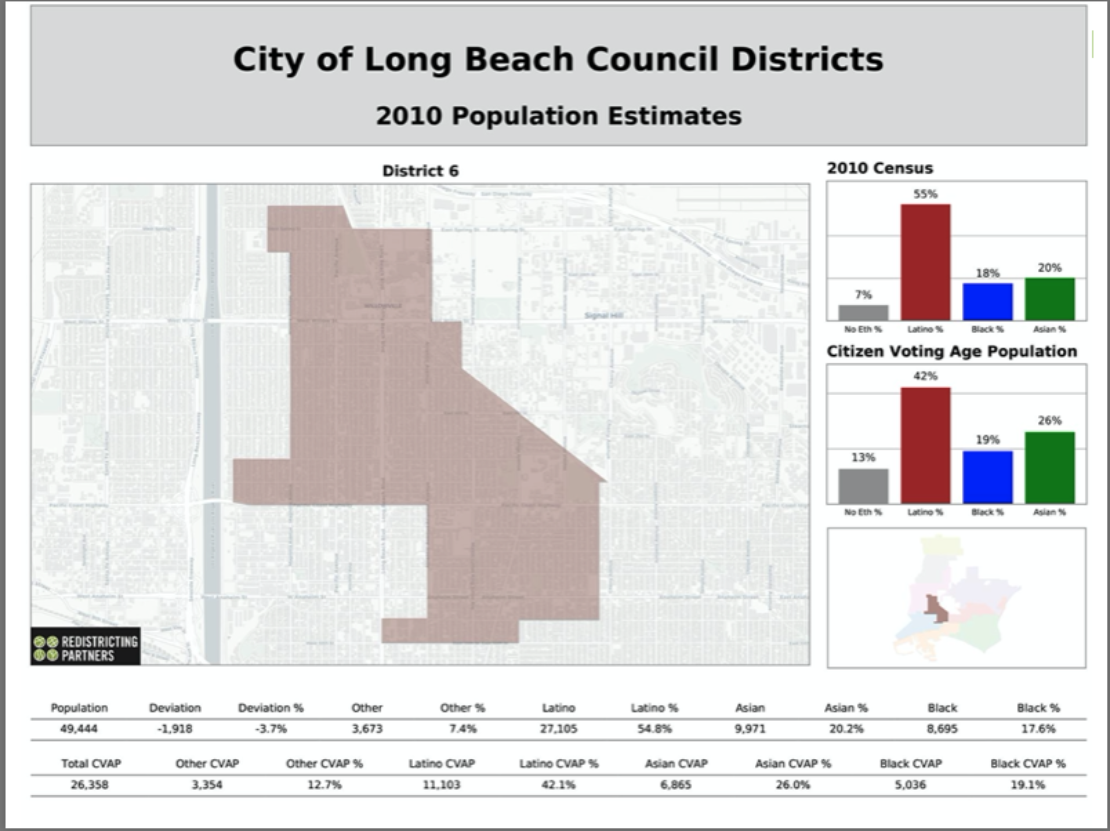 A screenshot of estimated populations in the 6th District that was presented to the Long Beach Independent Redistricting Commission in March 2021.

Communities of interest, those that share common social, cultural or economic interests, are expected to be an especially important topic in District 6, which is home to one of the largest populations of Cambodians outside of Cambodia.

Voters approved the commission in 2018 as part of a series of charter amendments. Known as Measure DDD, it was backed by groups like Common Cause and Equity for Cambodians, that sought to unify the Cambodian population of the city into one district through the creation of the commission. District lines were previously drawn by city staff at the direction of City Council members.

Cambodia Town currently is part of four City Council districts, and there is momentum to try to bring that part of the Anaheim Corridor back into one district.

The district is majority Latino, with an estimated 55% of residents in the area being Latino, but also has large Asian (19%) and Black (14%) populations, according to United States Census population estimates from 2019.

Census data is expected to be released sometime in September, which is when commissioners will start the process of re-drawing district lines. Feedback from the community, including map submissions and community of interest suggestions and a schedule of upcoming meetings can be found on the city’s website.