Family and friends of 22-year-old Evan William Davis came together on the corner of Long Beach and Del Amo boulevards on Friday to mourn the young motorcyclist who died in a collision at the same location Monday evening.

In a vigil that lasted several hours, Davis’ mother, siblings, friends and girlfriend shared stories about his life and exuberant personality.

“He would always joke around,” said 21-year-old Alexander Cruz, who had been friends with Davis since the two were in second grade. “No matter what the situation was, he would always find a way to make people laugh.”

Davis was killed at about 7 p.m. Monday after his motorcycle collided with a truck, police said. Davis was transported to a local hospital, where he died.

Police said the crash occurred when a 29-year-old man from Long Beach, traveling eastbound on Del Amo Boulevard in a 1997 Chevy S10 truck, made a left turn into a parking lot and struck Davis, who was traveling westbound down Del Amo Boulevard. The driver remained on scene and police are continuing to investigate.

Family and friends on Friday said Davis had a sunny disposition in spite of an often difficult life. Born prematurely and with neonatal jaundice, he struggled with various health problems throughout his life. As a child, he was diagnosed with attention deficit/hyperactivity disorder, leaving him struggling in school.

Still, Davis graduated from Rancho Dominguez Preparatory School in 2017 and attended classes at Los Angeles Harbor College until the beginning of the pandemic—his ADHD rendered virtual classes unfeasible, according to his mother Shareena Davis.

“Everything he’s been through, everything he’s had to endure—and he still did it,” Shareena Davis said about her late son. Standing in the bright midday sun, the petite 54-year-old clutched her son’s fluffy blue bathrobe, a ring of his on her index finger. 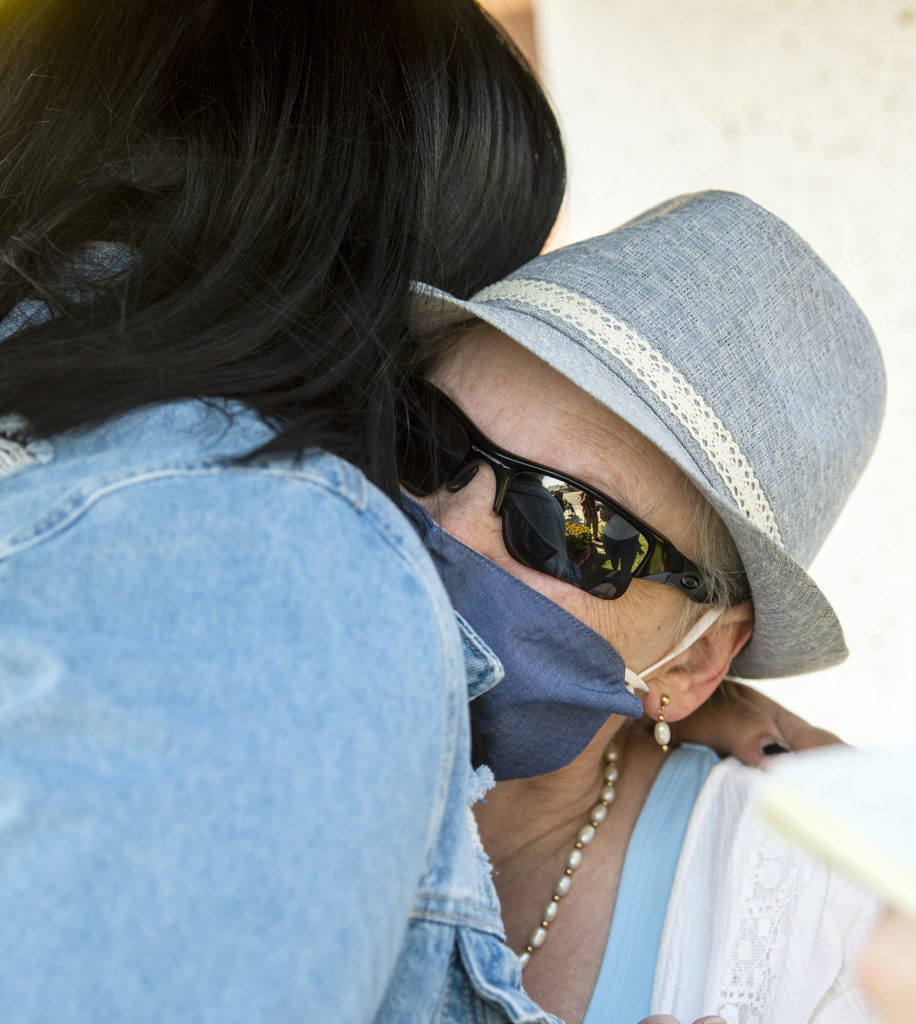 Denisse Garcia, 19, the girlfriend of Evan William Davis who was killed Monday evening when his motorcycle collided with a truck hugs his mother Shareena Davis, 54, in Long Beach Friday, February 26, 2021. Photo by Thomas R. Cordova.

The ring, she explained, had been a symbol of love exchanged between Evan and his girlfriend, Denisse Garcia. The two met while working at a McDonald’s restaurant in Carson just before the onset of the pandemic.

“When I met him, I thought he was mean,” Garcia said laughing, while simultaneously pushing back tears. That, however, changed quickly. “He lit up my world, you know, he was that light at the end of the tunnel” she said. “And he still is.”

The loss of her boyfriend wasn’t the only bereavement the 19-year-old suffered this year. Six weeks ago, Garcia buried her mother, who died of COVID-19. “He was there for me through everything,” Garcia said. “Now I’m back in the same process, but he’s not here.”

Standing in the shade of a McDonalds sign, Davis and Garcia hugged each other tight. “We need each other,” Davis said, her voice pressed from pushing back tears.

While the cause of the accident is still under investigation, Davis said she is determined to fight for the turning lane to be eliminated, to prevent another crash like the one that killed her son. “I’m going to campaign for Evan,” she said. “That is my new mission.”

Before the fatal accident, Evan lived with his family in unincorporated Rancho Dominguez. He will be buried at Green Hills Memorial Park in Rancho Palos Verdes. A fundraiser has been set up to assist the family with the funeral cost.