From Kennebec to Kalamazoo, how Long Beach named its streets • Long Beach Post News
- ADVERTISEMENT -
Help us light up the city; Add your home to the 2022 Holiday Lights map. CLICK HERE

It’s population center was the corner of Sixth Street and American Avenue (now Long Beach Boulevard). And if you wanted diversity, you’d come to the right place, though admittedly it was a different sort of diversity than the kind we talk about a couple of decades into the 21st century. In 1900, the city had 486 Canadians, 461 British natives, about 200 Germans and a bit more than 100 each of Scottish and Mexicans. The Black population was right at 100, and then there were about 20 other nationalities represented, including a half-dozen Spanish people and one lonely Finn. So, a White-ish diversity.

That was the city at 12 years of age. After that, like with many teens, it had a tremendous growth spurt,  exploding in both population and area.

In 1910, its population was 17,809, a growth of 691%, making Long Beach the nation’s fastest-growing city. Could it get back-to-back titles by repeating in 1920? It could and did, making a 212% increase with a population of 55,593 with its population center by then the former outskirts of town, way out at the corner of Linden Avenue and 22nd Street.

As Long Beach gobbled up land to the north, east, west and south through dozens of annexations that included such townsites as Alamitos Beach, Belmont Heights, Zaferia, Los Cerritos, Virginia City and Chateau Thierry, as well as former rancho and farmland in North and West Long Beach, it acquired streets and thoroughfares in those neighborhoods and eventually, those street names had to be changed to conform with existing streets within Long Beach’s borders that ran into the annexed townsites. Just as often, Long Beach city planners changed the names of newly acquired streets seemingly on a whim.

In laying out the original plat in 1882 for Willmore City, which would soon enough become Long Beach, William Willmore didn’t name many roads, but he did have the novel idea of naming Pacific and Atlantic avenues on either side of American, which would years later, in 1959, be changed to Long Beach Boulevard, messing with the elegant geography.

There was a mad flurry of street name changes in the summer of 1910, when the city changed dozens of street names, mostly to avoid confusion, though sometimes just…because.

Pennsylvania and Daly avenues, which were extensions of one another, became unified as 15th Street. For similar reasons the venerable Washington and Lincoln avenues became Eighth Street. Pearl Lane was changed to Quinzy Avenue (which was later changed to Quincy), Brownie Drive became Mira Mar and the easily pronounced Vine Avenue became Junipero.

When Alamitos Heights was annexed in 1923, memories of the Spanish-American War, which ended in 1898, were still fresh, and several streets took on names inspired by the war, including Oregon Avenue (named for the battleship), Panama, Santiago, Havana, Manila, Flint and Winslow, the latter two named for naval officers in that war. 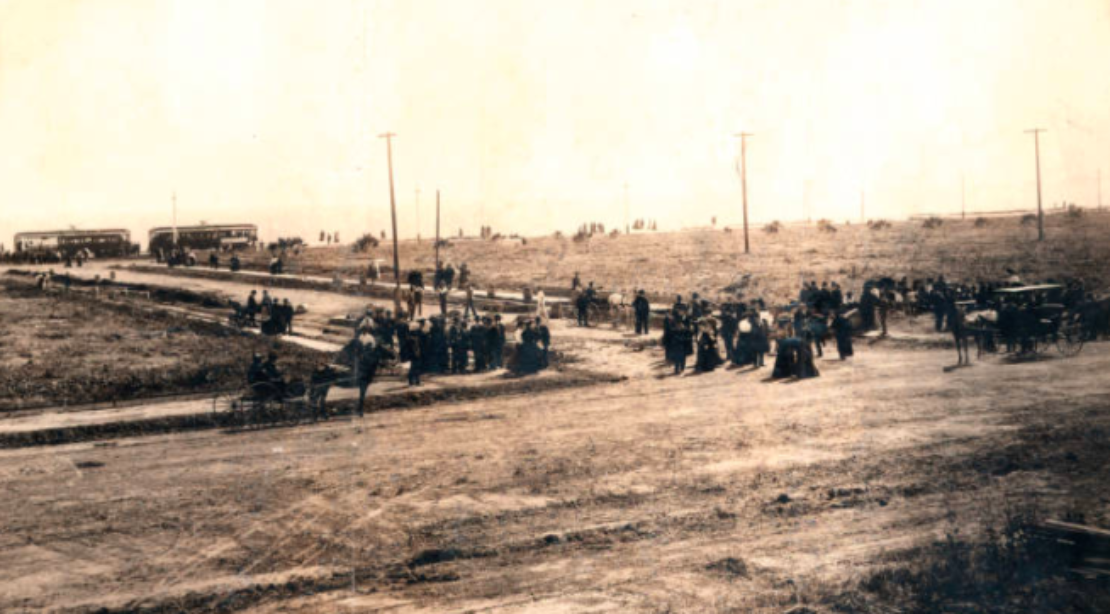 Interested buyers congregated at a lot for sale in the Alamitos Beach townsite at the corner of Nevada Avenue and Park Boulevard, now Temple Avenue and First Street. Photo courtesy of the Long Beach Public Library.

The original developers of the Alamitos Beach townsite had the great idea of laying out its north-south avenues in alphabetical order, making it handy for people to navigate through that part of town. The avenues started on the west end at Alamitos and continued through Bonito, Cerritos, Descanso, Esperanza, Falcon, Gaviota, Hermosa, Independencia, Junipero, Kawahea, Lindero, Modjeska, Naranja, Ojai, Paloma, Quito, Redondo, Sobrante and, at the end of the line, the appropriately named Termino.

Then Long Beach came along and annexed the neighborhood and managed to muddle things up, changing Descanso to Orange Avenue, Independencia to Cherry, Kawahea to Kennebec, Naranja to Temple, Quito to Coronado and Sobrante to Loma.

In later years, developers resurrected the alphabetized system, with a tract in West Long Beach running eastward from Santa Fe Avenue to the LA River taking a short run through the letters with Adriatic, Baltic, Caspian, Delta, Easy, Fashion and Gale avenues. Much later, there was the East Long Beach series of Hackett, Iroquois, Josie, Knoxville, Ladoga, Monogram, Nipomo and Petaluma avenues.

In 1920, the newly developing Belmont Shore had just four north-south avenue-south avenues, compared to the 20 it has today. Ximeno, Santa Fe, Nieto and LaVerne, then nothing until Bay Shore. Santa Fe became Park Avenue for a variety of reasons. It got its original name because developer Edwin Bouton, a Lakewood pioneer, had secured rights from the Santa Fe Railroad to run tracks from Lakewood to Belmont Shore, where a station was to be built on the eponymous avenue. The failure for that to happen, coupled with the fact that there was already a Santa Fe Avenue on the Westside, resulted in the name change to Park, which, after all, ran alongside Recreation Park before diving into the Shore.

And in the Shore’s earlier days, when it was still rising out of the San Gabriel River wetlands, Division Street wasn’t a street at all, but rather a drainage canal, just doing its part in the building of the budding neighborhood.

When further north-south avenues were built in the Shore in the early 1920s, an advertisement for the coastal community promised that the area would be the “playground of all the inland cities,” and in a tribute to those non-beachfront towns, the developers named avenues Corona, Covina, Glendora, Pomona, Santa Ana and Claremont.

In April of 1921, the city’s planning board took the perilous action of moving to banish Spanish names from streets. It did not go well. The move sparked an outcry of protests from residents noting the Spanish streets references to culture, history and just their all-around mellifluous sound, Junipero and Ximeno notwithstanding. Planners beat a quick retreat, saying that the discussion was merely “informal,” and that no vote was taken for the elimination of Spanish street names.

Perhaps seeking to distance themselves from that disaster, or perhaps rapidly running out of ideas for street names—there are only so many words before you run out of them—the following month the city acquired the services of a Rev. L.H. Koepsel, who proclaimed himself to be a bit of an expert at the science of thoroughfare nomenclature.

The reverend offered up a plan in which the city’s streets—the avenues would henceforth be known as esplanades—be named in alphabetical order. Ocean, he decreed, could maintain its name, but he didn’t cotton to the town’s main commercial avenue’s dowdy name of Pine and wanted to change it to Aurora Boulevard, with the streets north of Ocean being named for states or countries in alphabetical order: Alabama, Bolivia and so on. After running through all the letters, streets farther north would start over again with streets named for animals, from Antelope Street to Zebra Street.

Then, the avenues—pardon me, esplanades—with roads west of Pine, or Aurora, being named after American cities, from Boston to Kalamazoo, while east of Aurora they’d be named for American statesmen, ranging from Buchanan to Zachary (Taylor), while farther east, he would use Spanish names “selected with such care that they are attractive whether pronounced correctly or incorrectly.”

After Rev. Koepsel presented his research and plan before the city’s commissioner, it was duly received and filed.

The city’s municipal code has generally given the power to name streets to the Planning Commission, according to Rick De La Torre, spokesman for the Department of Development Services. In some instances, the Department of Public Works has submitted proposals to the City Council as a part of a development’s tract map approval process.

An example of this, said De La Torre, was when the McDonnell Douglas Corp. suggested names for its Douglas Park Development project to honor those who were involved in the design, production or testing of aircraft and products on the site.

And so, among the city’s newest street names, we now have some streets that may become answers to future street trivia questions, including:

Brizendine Avenue, named for John C. Brizendine, a former McDonnell Douglas president before retiring in 1982 after 34 years with the company.

Bayer Avenue, for Harold Bayer, who worked for Douglas and McDonnell for 42 years, retiring as vice president of product support in 1981.

McGowen Street, for Jackson McGowen, former president of the aircraft division of Douglas and later McDonnell Douglas, who worked on the DC-6 through DC-10 aircraft.

Schaufele Avenue, for Roger Schaufele, an aeronautical engineer at Douglas who was the aerodynamicist on the DC-8, DC-9 and DC-10 programs.