'This is the side of it that nobody wants to talk about': Local funeral homes fill up as COVID-19 deaths surge • Long Beach Post News
- ADVERTISEMENT -

In the early grip of the COVID-19 pandemic in March, local mortician Kenneth McKenzie ordered an extra freezer trailer in anticipation of the worst.

He started using that additional space on Tuesday for the first time this year, as COVID deaths in Long Beach and Los Angeles County hit record numbers.

McKenzie said his business, McKenzie Mortuary Services, typically sees about three to four new bodies a day. Now, in a sad fallout from the fall surge in cases, he’s handling about 10 to 12 each day, including entire families. This week, he received a brother, sister, mother and uncle—all lost to COVID.

“A whole family has been wiped out,” he said. “Their house is empty.”

As the overall number of COVID deaths nears 10,000 in Los Angeles County, health officials fear the first weeks of 2021 could be even worse if cases continue to surge from holiday gatherings. It was estimated last week that one person in LA County died from COVID every 10 to 15 minutes.

Long Beach on Tuesday reported a total of 380 deaths, about a quarter of which have occurred in December.

And while there has been extensive news coverage of hospitals overflowing as exhausted doctors and nurses treat patients, McKenzie said little attention is paid to a grimmer side of the pandemic as bodies fill up in funeral homes across the country.

“This is the side of it that nobody wants to talk about,” he said.

Morticians say the days after Christmas are some of the busiest of the year as the sick and dying will sometimes hold on for a last holiday with their loved ones. With a pandemic on top of the busy season, local funeral homes say they’re now flooded with grieving families and bodies in freezers.

“I’ve never seen anything like this, and I’ve been working in this city for 22 years,” said Jonathon Polk, manager at Destiny Funeral Home and Crematory in North Long Beach. 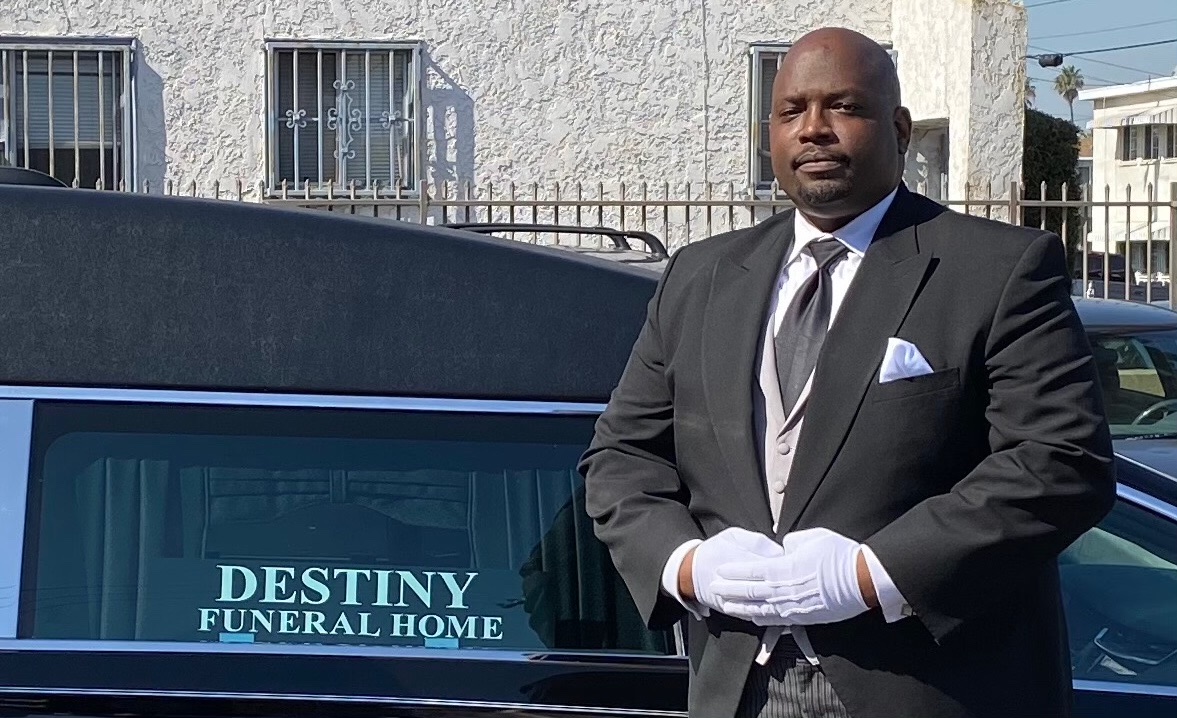 Polk said the funeral home last year served 257 families. This year, Destiny has so far served 452 families. He estimates that about 30-40% of those are COVID deaths.

Polk said he also picks up the deceased for two local hospitals, but freezers are so full that he’s been using an additional space in Orange County.

In the beginning of the pandemic, many funeral homes declined to embalm or prepare people who had died from COVID due to health concerns, he said. At that time, Polk, a licensed embalmer, would drive to Los Angeles and other areas to help families who couldn’t find anywhere to take their deceased loved one.

“How do you look at a family and tell them you can’t do preparation,” he said. “I just couldn’t do that.”

Born in Long Beach, Polk, 39, said he grew up attending funerals with his grandmother, who raised him, and developed a passion for the field. He plans to one day own his own funeral home.

As they pick up bodies and work to comfort families, morticians, he said, are another unsung hero in the pandemic.

“With everything that’s going on we try to do the best we can,” he said.

McKenzie said many families who have lost loved ones to COVID struggle to find closure because they can’t have the traditional funeral experience.

With many memorial services now virtual, McKenzie tries to personalize the experience with a live camera crew and other touches. Other families have opted to keep loved ones stored so they can have an in-person funeral when health restrictions are lifted. 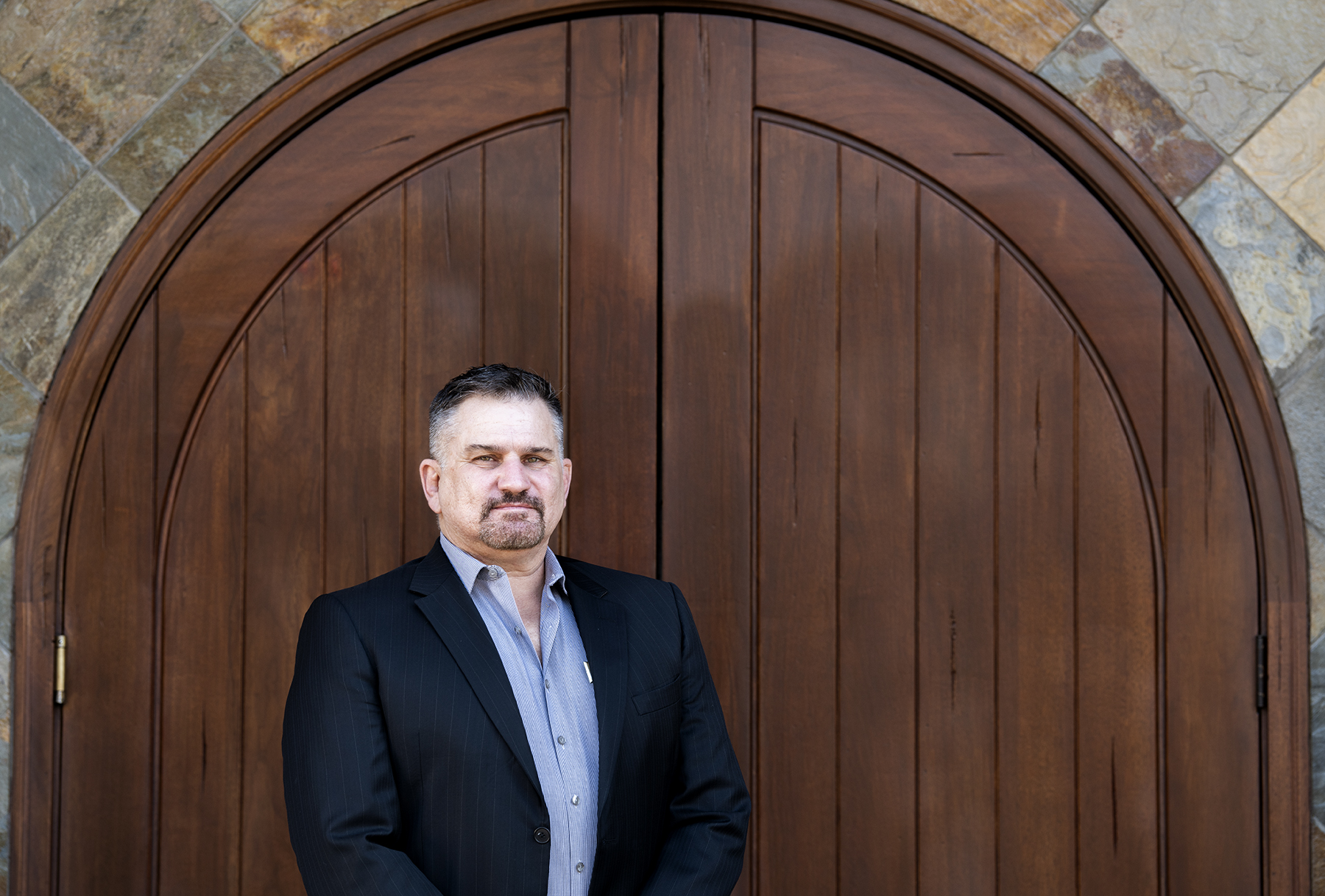 McKenzie, 54, founded his business in 1994 at the height of the AIDS pandemic when the funeral home where he was working refuse to take AIDS cases. He started with a small storefront in Signal Hill and eventually moved to a 7,000-square-foot funeral home on Anaheim Street near Termino Avenue.

He was recently a frontrunner to be on the gameshow “Who Wants to Be a Millionaire?” with a group of first-responders, but wasn’t chosen, he suspects, because his profession might be too much reality for some.

McKenzie said he hopes to send a strong message from his mortuary.

“I hope this article slaps people in the face who think they don’t have to wear a mask,” he said. “I don’t understand how people can pretend it’s not happening. The numbers don’t lie.”