The real estate market in Long Beach, as well as in most of the rest of the state, remains a decidedly seller’s market, with homes flying off the shelf quickly and generally at over already high asking prices.

And among the hottest properties in town right now are the mid-century Cliff May-designed homes in the Ranchos neighborhood in East Long Beach. Right now there are four homes for sale in that neighborhood east of Studebaker Road between Wardlow Road and Spring Street with an average listing price of $1,215,500.

I’ve already written plenty about Cliff Mays so this isn’t a Cliff May column. Rather, it’s about a house for sale on the other side of El Dorado Park from the Ranchos, in a neighborhood called El Dorado Park South that’s bordered west to east by Vuelta Grande Avenue and the mighty San Gabriel River, and north and south by Stearns and Atherton streets..

That neighborhood has a bit more than 2,000 residents, 80% of them owners of their homes built in the early to mid-1950s. If you’re an admirer of mid-century modern, there’s a home in the heart of the neighborhood that stacks up well, if not superior to, the Cliff May models.

And it’s less expensive, too, with an asking price of $899,000, but don’t bet against it ending up fetching a million by the time the offers are accepted by its listing team of Jason Bergman and Tom Flanagan, of Compass Real Estate. 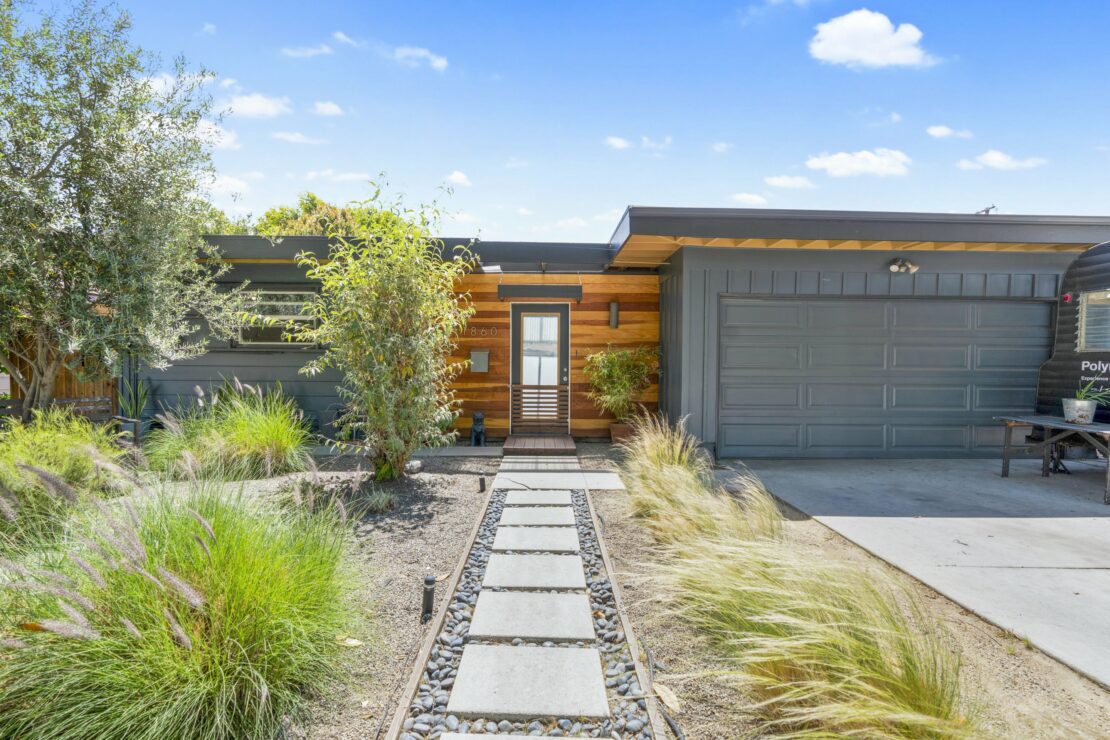 The agents have termed the house at 1860 Volk Ave. “Bohemian Modern,” and the four-bed, two-bath house checks most of the boxes of mid-century modern including the sleek relentlessly horizontal lines and the expansive and generous marriage between the interior and exterior of the house.

As you approach the home from the street you may find yourself wondering if mid-mod architect Ed Killingsworth had a hand in its design. Certainly his spirit is there with nicely manicured drought-resistant landscaping bracketing the square pavers set upon a bed of river rock leading to the front door which opens, not to the living room as you’d anticipate, but rather to an open air alcove with sitting areas on a multi-level deck and water feature. It’s a serene and welcoming place to curl up with a book, if you can manage to not fall into a Zen-induced sleep. 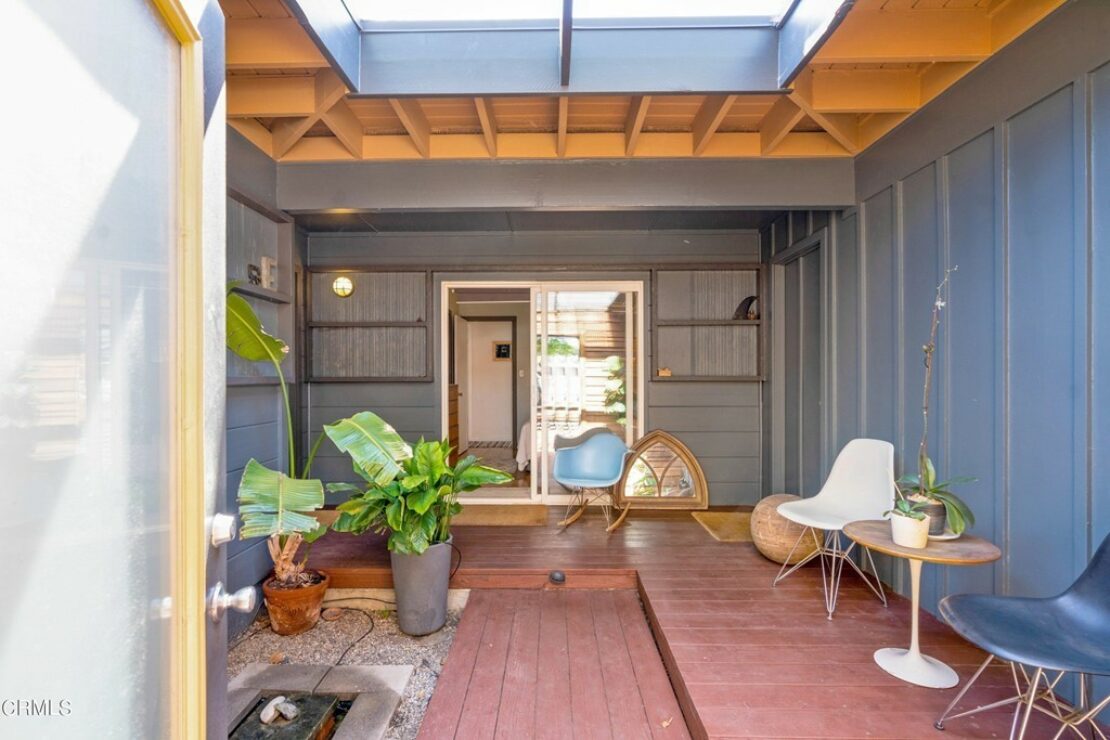 Inside is where the Bohemian part of Bohemian-Modern comes into play. While the architecture cleaves fairly faithfully to mid-modern, the term “Bohemian” relates more to the home’s decor, and this house meets the criteria to earn the term. How the buyer will manage to maintain this colorful and eclectic look is pretty much up to them, because the whole effect will be ruined by slapping some Navajo Beige on the walls and throwing down wall-to-wall carpeting and Ikea furniture.

The current owners have set the stage, though with some fine furnishings, textiles and colors that mark the boho style. The owners are both 30-year veterans in the apparel fashion industry and the home is testament to their taste and eye for surprising combinations of materials.

Maybe most striking is the open-design kitchen’s backsplash, a randomly arranged collage of yellow, red, orange, white, red and blue tiles. The floor is Spanish adobe and there’s plenty of storage in custom translucent cabinetry. 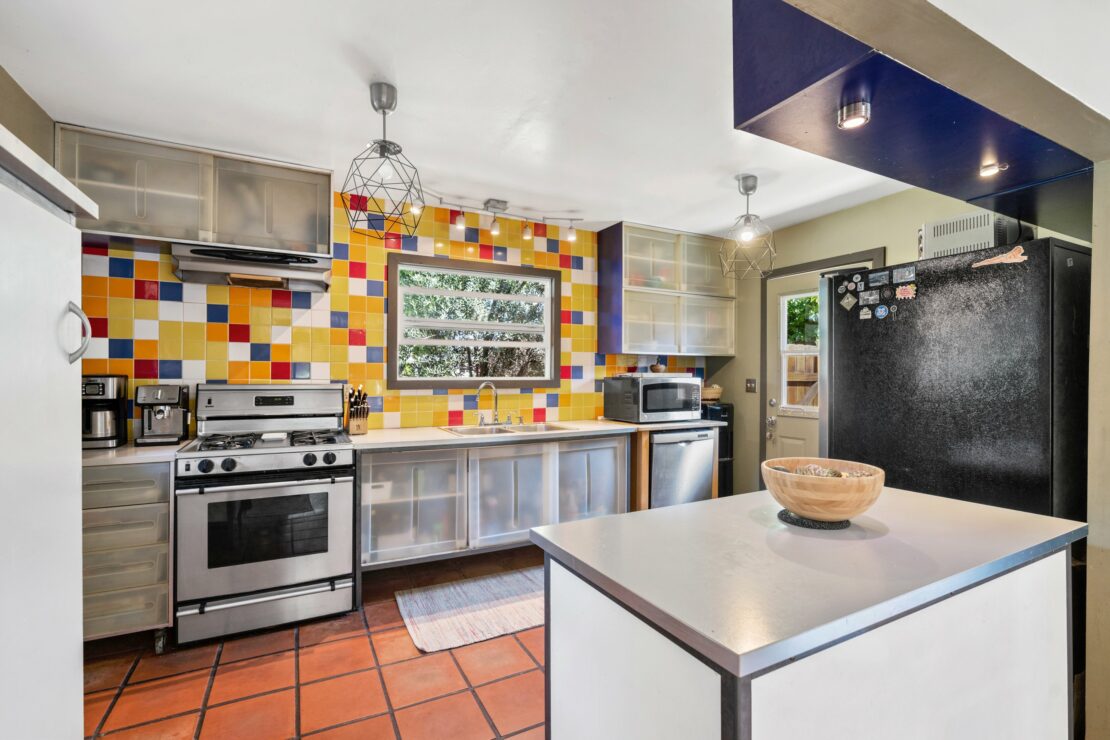 The striking colorful backsplash in the kitchen. Photo by Michael Wilkerson.

Another mid-modern feature are sliding glass doors off the master bedrooms that lead out to an expansive shaded patio that looks out into a backyard with raised flower/vegetable beds along with a copse of fruit trees including avocado, fig and lime.

The overall effect of the home is one of comfort and color, and it’s a bit cozier—more homelike—than the more minimalist Cliff May homes in its neighborhood to the north.

“We’ve already had three calls asking what we’ll take for it right now, before it’s listed,” said Bergman. “But we’re going to wait until everyone’s had a chance to look at it. The market will drive the price.”

And it’s a hot market.