Should LBUSD grade students during the pandemic? A parent says struggling kids are left behind • Long Beach Post News
- ADVERTISEMENT -

When campuses closed and classes went virtual this year in the COVID-19 pandemic, Venice Gamble knew his son Kaheal, a 16-year-old junior at Lakewood High School, would struggle with the changes.

Kaheal, who plays on the football team, is typically a C- or B-student, but his grades this semester have plummeted without normal class structure, Gamble said. He’s now worried that his son won’t be able to get into college after graduation.

“No college would take him with his grades how they are now,” Gamble said. “I would be surprised if Long Beach City College accepted him. That’s how bad it is.”

Gamble, who lives with his wife Tiffany and their three children in North Long Beach, is one of many parents who are upset over the Long Beach Unified School District’s choice to have grades this semester after opting for credit/no credit instead of grades last spring when the pandemic hit.

With a grading system, Gamble said he’s concerned that low income children, children of color and those with ADHD, like his son, will be left behind. On Friday, he lodged a complaint with the school district seeking the elimination of grades while students are attending school virtually.

Gamble, an investment banker who lost a bid for state assembly in 2014, said he’s considering filing a lawsuit against the district if it doesn’t change its grading policy.

“I’m by no means trying to get my kids out of having to do the work and I don’t want them to have a free pass, but this is a horribly flawed system,” he said. “There are too many uncontrollable aspects for the teachers, parents and students.” 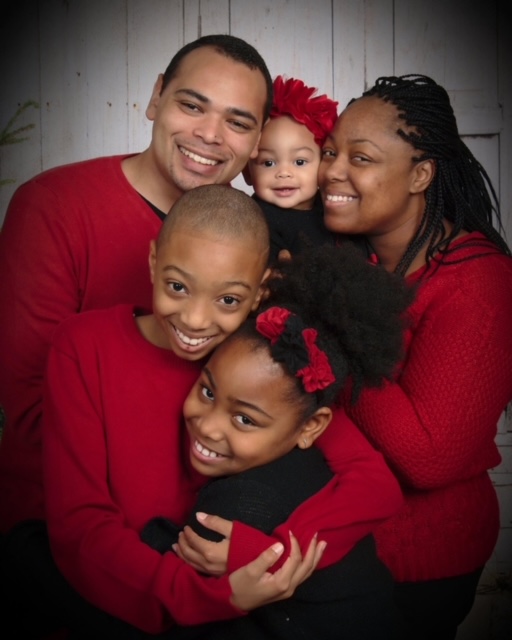 Venice Gamble and his family. Gamble has filed a complaint with the LBUSD over its grading policy in the COVID-19 pandemic.

School districts across the country have grappled with how to fairly issue grades during distance learning.

Some parents say grades are unfair for students that struggle with access to good internet connection and other resources. Others say a credit/no credit policy punishes high-performing students who are relying on A’s for their college applications.

In the spring, parents in Long Beach launched a petition requesting the district to include grading as option for students concerned about their college prospects.

Long Beach Unified on Monday said it has received Gamble’s complaint and is reviewing the request. Spokesman Chris Eftychiou said the district has provided teachers with guidelines on how to grade for equity in online classrooms.

Sample guidelines include having “soft deadlines” that don’t punish students for late work and avoiding points for attendance.

While his complaint asks that the school district give credit to all students, Gamble said he’s open to other options.

“I don’t have the solution, but let’s start the conversation,” he said. “Because what we’re doing now isn’t working.”

Last Friday, for example, Gamble said, his son and daughter couldn’t join their classes on Zoom because of a problem with the internet connection. He said he and his wife both work full-time at offices, so they can’t monitor their children from home.

“I just don’t want my children to be left behind for a year,” he said. “I know other parents feel the same way.”

The news comes as some private schools in Long Beach have allowed students to return to classrooms under waivers, but the Long Beach Unified School District for now has opted to hold off on applying the opportunity.

The Los Angeles Unified School District on Monday announced that plans to return to school in the COVID-19 pandemic will include a combination of at-home learning and in-person instruction.

The district, however, did not provide a date on then on-campus instruction would resume, as infection rates in Long Beach and Los Angeles County have recently surged.

Long Beach Unified has repeatedly said that Jan. 28 is the soonest it will begin to broadly reopen campuses.