The 2021 Olympics were memorable in many ways—the resounding celebratory cheers as the United States won more medals than any other country, the graduation of skateboarding from the skate park and sidewalk (to the annoyance of pedestrians) to the first-ever Games competition, the great Simone Biles showing the world in no uncertain terms that superathletes are, above all, human beings like us. The games were also dogged by protests, disqualifications¸ controversy, COVID-19 and confusion over what year we were actually in.

By contrast, the 24th annual Purina Pro Plan Incredible Dog Challenge was dogged only by dogs. The Challenge showcases doggie derring-do during three regional events including the Western Regionals in Huntington Beach.

The recorded Western Regionals competition, which took place July 16 and 17 at Huntington Beach State Park, is airing across the country now, and locals can check out the moondoggies Saturday at 6 a.m. on KCAL and Sunday at 4 p.m. on KCBS. Here’s a preview for you.

Furry athletes compete in agility exercises; high-flying disc routines; a relay in which two dogs weave through parallel rows of poles, take a turn through a tunnel, and weave back to the finish line; aerial maneuvers involving flying discs; and taking running dives off a 40-foot dock into a 19,000-gallon pool.

And every year in Surf City USA, the nickname that Huntington Beach has officially laid claim to, humans flock to the sand to watch pups in life jackets do some serious ripping through the current, with a little help from their human dudes and dudettes. Here are a few of this year’s competitors, whom you’ll see in the event’s broadcast. Not a Barney among ‘em! 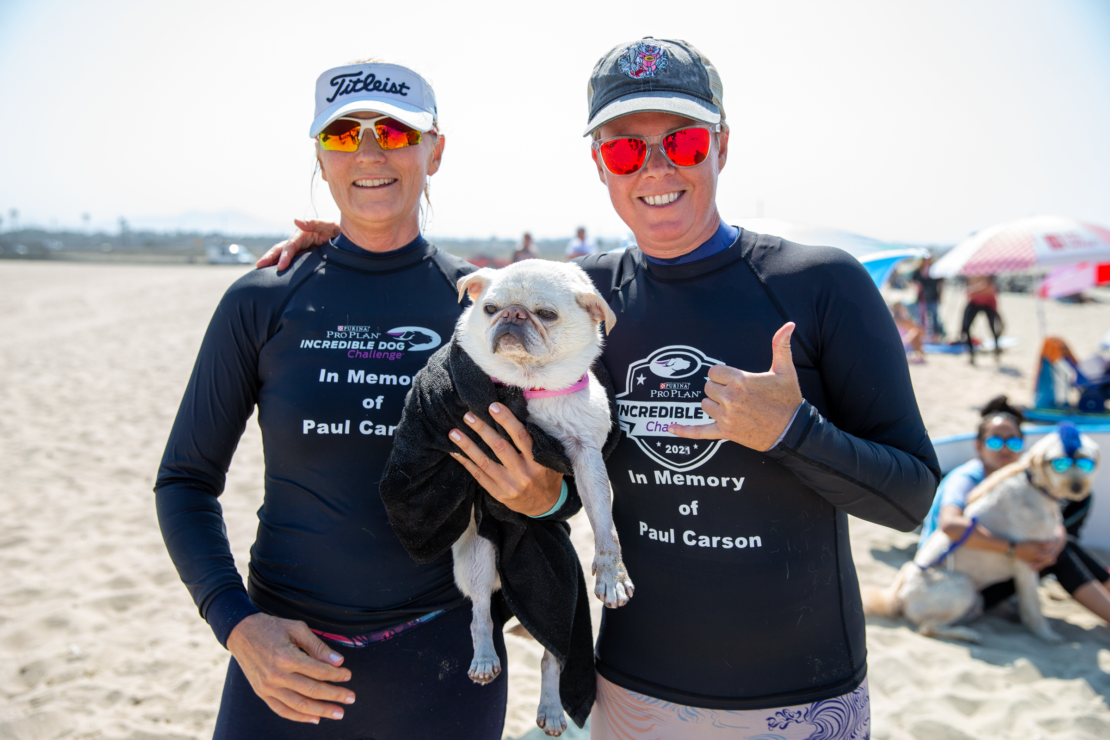 Gidget (of course, there has to be a Gidget in the competition) is an 8-year-old female pug from San Clemente. She competes with her trainer, Alecia Nelson, and is also skilled at agility and catching a Frisbee. “Most pugs don’t swim and many say pugs sink,” Nelson said, so Gidget is one-of-a-kind. She is known for standing on all fours when surfing and she gets most of her points for turning and riding backward. Photo courtesy of Purina Pro Plan J. 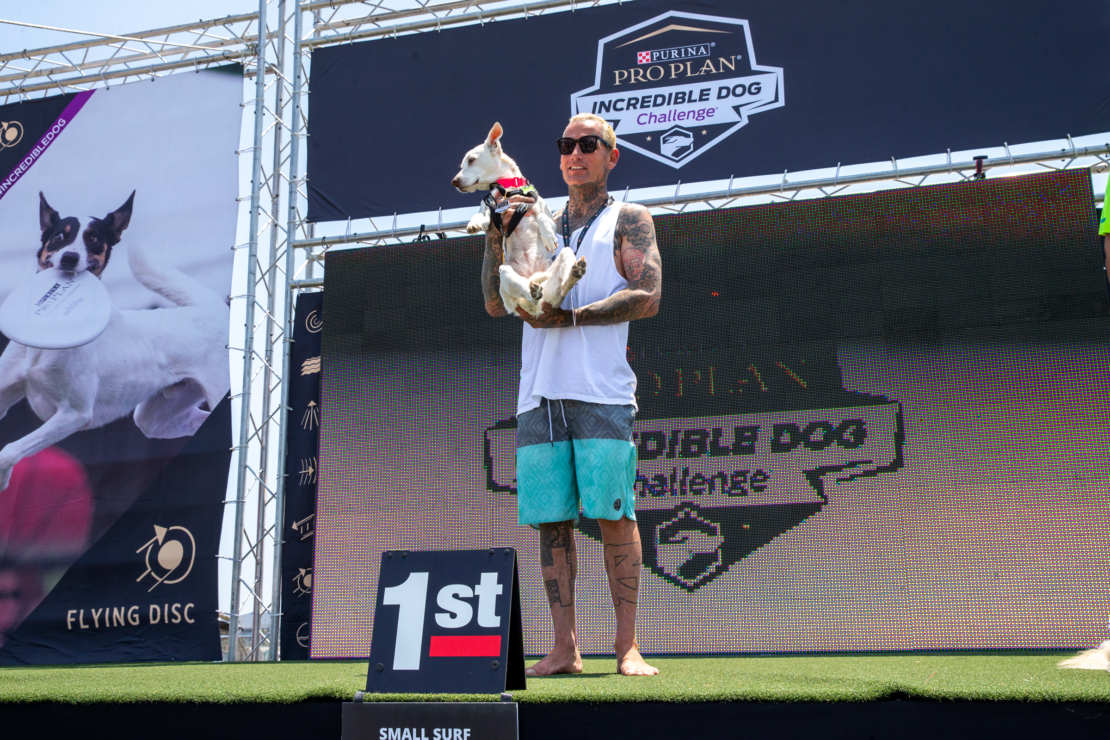 Sugar is a Huntington Beach native. She’s a 10-year-old female collie who competes alongside her trainer, Ryan Rustan, who rescued her in Oakland. Sugar loves riding in Rustan’s electric bike. When she’s not competing, she works in hospitals as an emotional-support dog. Photo courtesy of Pro Plan J 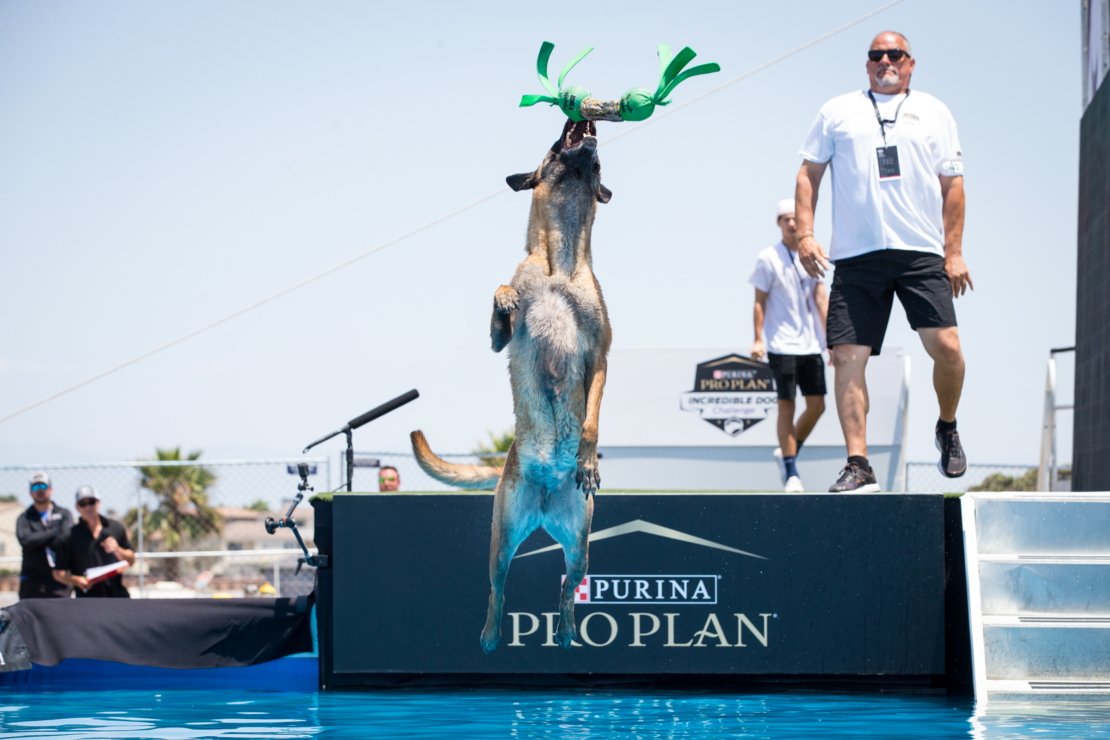 Zuma is a 4-year-old Belgian Malinois rescue from Orange who thinks she’s a lap dog! She competes alongside trainer Tyler Weinstein, who got her as a medical-alert dog after battling cancer. “She proves to me every day why dogs are Man’s Best Friend,” Weinstein said. Photo courtesy of Pro Plan J

The canine competitors don’t go into the surf without 100% supervision and protection, and the waves they ride are way short of gnarly. The beach used for the competition has small waves and a lot of sandy shoreline so that the competitors can pad into the waves. Limits are imposed on time in the water and distance to catch waves.

“The safety and well-being of all the competitors involved in the Incredible Dog Challenge are of the utmost importance, and we take all necessary precautions to ensure that each event poses no threat to any of the canine competitors or their owners,” said Jim Allen, Purina Pro Plan’s senior events manager. “For our Surf Dog competition in Huntington Beach, weather conditions, currents and wave size are all considered prior to the event start, and any dangerous conditions would lead to the postponement or cancelation of the competition.”

Allen added that additional precautions include three Huntington Beach lifeguards per dog to assist each one during their ride; requiring life vests for the dogs; allowing only soft-top boards to ride, with one dog at a time on each one; and leaving the dogs unleashed while on the waves. A veterinarian is present at all times in case of injury and to assess the animal’s needs.