Long Beach beaches didn’t make the honor roll—but they didn’t land on the “bummer” list, either.

The city’s coastline is relatively free of bacteria and safe for swimmers during summer and winter months, according to Heal the Bay’s 31st annual Beach Report Card, released this week ahead of the Fourth of July weekend.

The nonprofit collects samples from roughly 500 points along the California coast, including open-water, marinas, bays, rivers and other places where people recreate. The samples included in this week’s report were collected during summer dry months (April to October, 2020), winter months (November 2020 to March 2021), as well as immediately after wet weather events, when water is more polluted.

However, Alamitos Bay in particular did very well during summer and winter months. 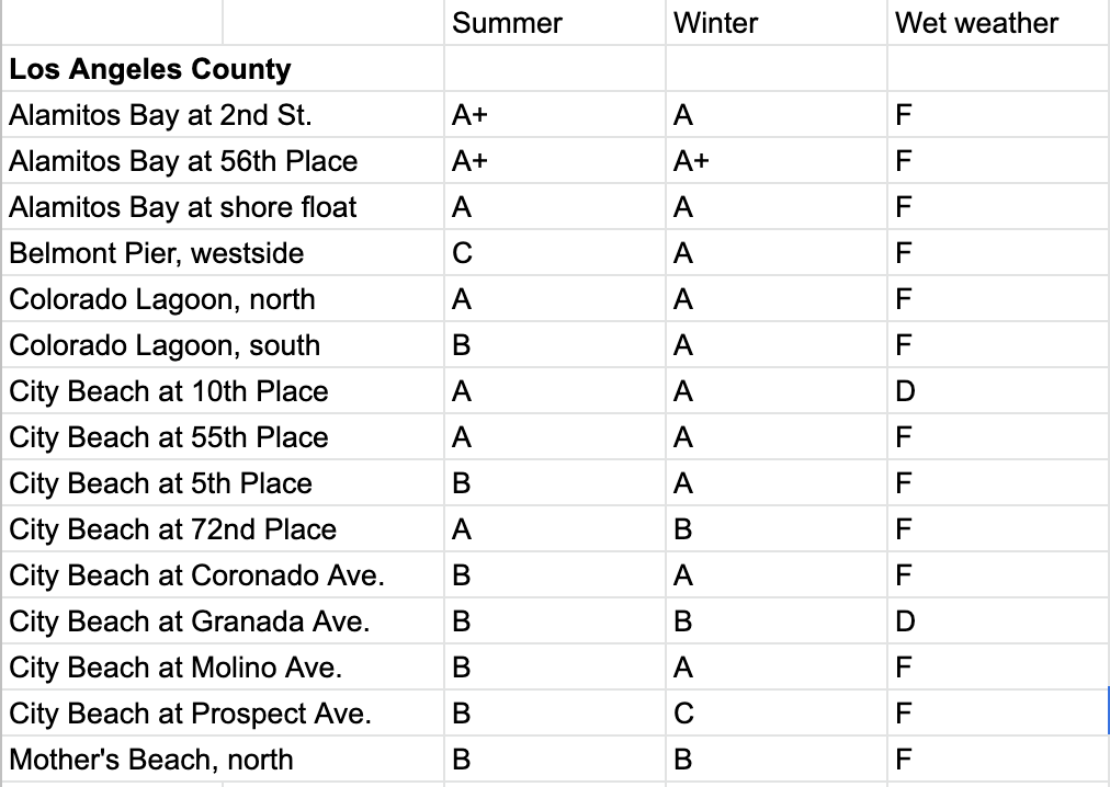 Colorado Lagoon, which, prior to 2012 showed up annually on the “Beach Bummer” list of the worst grades in the state, continued to be a success story after years of dredging and restoration efforts over the past decade. Improvements have included new landscaping to catch runoff from the neighboring golf course, a trash catch basin and the removal of thousands of pounds of polluted sediment.

A stretch of beach off Coronado Avenue just north Belmont Pier also improved from two years ago, when it was ranked the fourth dirtiest beach in the state.

No beach in the city scored below a C in dry summer or winter months.

The only beach in Los Angeles County to make the “Beach Bummer” list for the worst water quality was Marina Del Rey Mothers Beach, which is enclosed and experiences little wave action so bacteria pollution does not get flushed away from the shore.

Orange County beaches in Seal Beach, Sunset Beach, Surfside and Bolsa Chica—all popular destinations for locals—also ranked well this year, with Sunset Beach at Broadway even scoring a B grade during rain events.

Overall California beaches fared well, with 93% scoring either an A or B grade, which is on par with the five-year average, according to the report.

Polluted waters raise the risk contracting illnesses such as stomach flu, ear infections, upper respiratory infections and rashes. The highest risk time to enter the water locally is immediately after it rains, as bacteria is flushed through storm drains and rivers into the ocean.

The report notes that the coastal areas saw a 41% decrease in precipitation this winter. Some of the lower grades around wet weather in this year’s report were due to the high number of “first flush” samples because it rained so infrequently.

The 10 most polluted beaches in the state, also known as the “Beach Bummer” list, include: