The company, which already has a presence in Long Beach, is significantly expanding its operation in signing a 16.5-year lease for the sprawling 93-acre site west of Long Beach Airport. The property includes a 1.1 million-square-foot hangar that is big enough to hold the LA Memorial Coliseum.

The value of the lease with Australian-based developer The Goodman Group, which owns the property, was not disclosed.

“We’ve always had ambitions and conviction that what we are doing is important to humanity,” Relativity co-founder and CEO Tim Ellis said in an interview. “It’s humbling to walk through this facility, which will be the second-largest factory in the private space sector.”

Construction on the company’s new headquarters is expected to begin in the coming weeks, with move-in slated for January 2022. The existing hangar, in which aircraft such as the B-18 bombers of World War II and the C-17 Globemaster III were assembled for decades, will be completely reimagined and reinvented, the company said.

Goodman acquired the C-17 property from Boeing in 2019, about four years after the plant was shuttered, but could not move forward with any improvements or lease agreements until the city adopted the Globemaster Corridor Specific Plan, which informs land-use along Cherry Avenue and Spring Street by the airport. 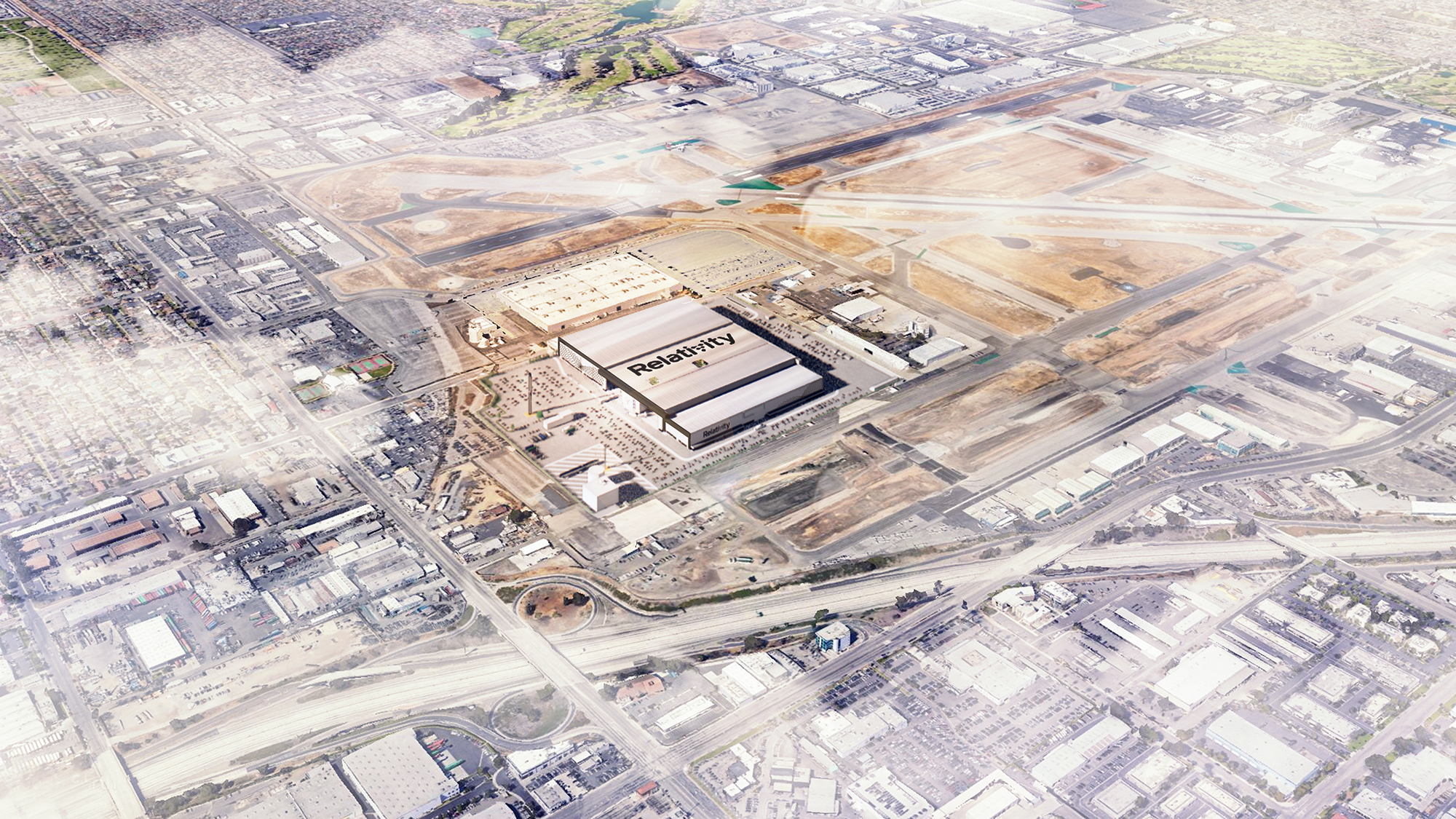 An aerial view of the new Relativity Space headquarters west of Long Beach Airport, including portions of Cherry Avenue that are part of the Globemaster Corridor Specific Plan. Courtesy of Relativity.

The Long Beach City Council unanimously approved the Globemaster plan on May 18, with a vision for a blended commercial-industrial business park that could include a mix of manufacturing businesses such as Relativity, hotels, retail and restaurants.

“Long Beach has historically always been one of the aerospace centers, not just the Los Angeles area but in the nation,” Ellis said, adding that the “redevelopment and reinvigoration” of the Globemaster Corridor with Relativity will continue that tradition.

Relativity is one of the newest additions to Long Beach’s growing space sector. The company currently occupies a 120,000-square-foot office and manufacturing facility in the Pacific Edge industrial park at East Burnett Street and Redondo Avenue.

Other rocket manufacturing and launch service providers in Long Beach include Virgin Orbit, Rocket Lab and SpinLaunch. The space and launch sector accounts for more than 6,500 jobs, according to local economists.

“Relativity is a growing leader in our world’s space economy, and we’re proud they chose Long Beach as home,” Mayor Robert Garcia said in an email. “This new HQ will bring thousands of great, good-paying jobs to Long Beach and strengthen economic growth for the entire region.”

Since moving to Long Beach in the summer of 2020, the company has more than quadrupled its workforce to more than 450, according to spokesperson Nicole Ryan. But further growth is coming, she said, adding that the company expects to surpass 600 staff by the end of the year, with ample room to continue expanding. The new facility will have capacity for more than 2,000 employees, she said.

“Los Angeles has the highest density for private space talent in the world—not just those who already know how to build and fly rockets but also colleges that have a great pipeline of talent,” Ellis said, noting Long Beach’s ideal location to pull from both the LA and Orange County labor markets.

With a small number of employees working at the NASA Stennis Space Center, Vandenberg Air Force Base, in Washington, D.C., and in Seattle, Ellis said the proximity to Long Beach Airport also is beneficial for business travel.

The expansion into the former C-17 facility will allow Relativity to ramp up production of its two rockets—the Terran 1 and the recently announced Terran R, which are the first entirely 3D-printed rockets.

Both rockets will be used to deliver satellites to orbit that could be used for communications, global positioning systems (GPS), weather tracking, environmental monitoring and more. In the future, the Terran R also will offer point-to-point space freighter service with missions between Earth, the moon and Mars, the company said.

Many aerospace companies have utilized 3D-printing technology for years to create rocket components but Relativity took it a step further, creating a proprietary machine, dubbed Stargate, and its own metal alloy. 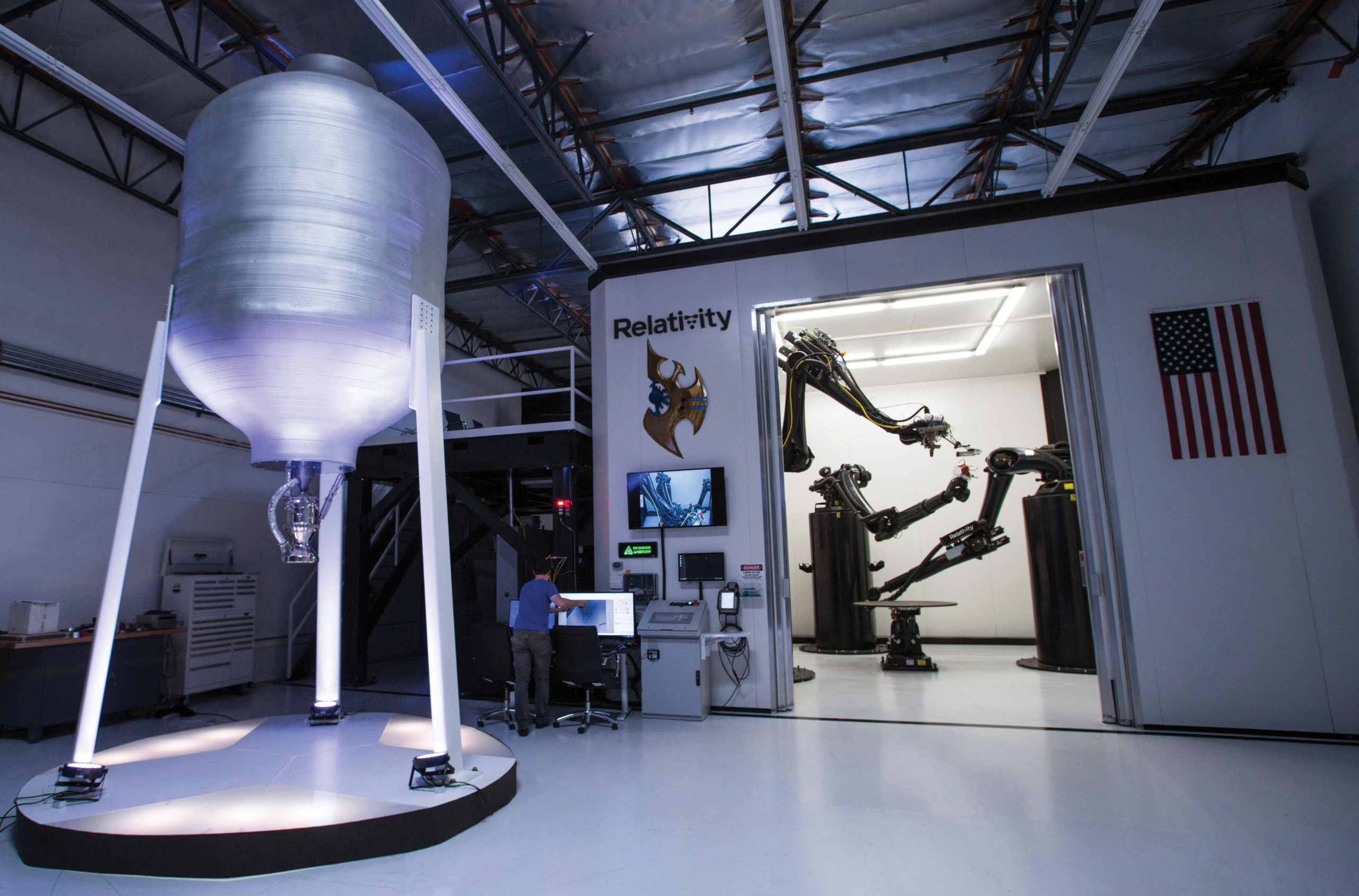 The company has five of its specialized printers operating at its current headquarters, which will continue the production of the Terran 1 after the expansion. The new facility will house dozens of additional printers and focus on the larger Terran R, according to Ryan. The facility also will feature a metallurgical lab, machine shop and a mission control center.

Sales for Relativity’s launch services have been robust, Caryn Schenewerk, vice president of regulatory and government affairs said previously. Despite not having a single launch under its belt, Relativity already has been awarded contracts by the U.S. Department of Defense, NASA, global security and aerospace company Lockheed Martin, Momentous, Spaceflight, Telesat and more.

Ellis said that SpaceX is the only private space company with a larger factory. The Hawthorne-based company has made “inspiring and impressive” progress since being founded by Elon Musk nearly 20 years ago, Ellis said, adding that SpaceX’s goal of going to Mars and making humanity multiplanetary is one he shares.

“I felt that 3D printing was inevitably required for that future to happen,” Ellis said.

While a “simple” rocket like SpaceX’s Falcon 9 may take up to 18 months to manufacture—below the industry standard of two years—according to the Smithsonian National Air and Space Museum, Relativity’s rockets can be produced in 60 days, Ryan said. The 3D-printing process allows for shorter build times by significantly reducing the number of parts from more than 100,000 to fewer than 1,000, she added.

The two-stage Terran R measures in at 216 feet long with a 16-foot diameter, a 5-meter payload fairing, or nose cone, and the capability to deliver more than 20,000 kilograms to low Earth orbit and beyond. The Terran 1, meanwhile, is 115 feet long with a diameter of 7 feet, 6 inches and the capability to deliver payloads between 750-1,250 kilograms depending on orbit.

The company has run over 500 tests of its engine at the company’s Cape Canaveral facility and expects to receive final engine qualification over the next couple of months, Ellis said. The first flight of the Terran 1 is slated for sometime before the end of the year but a date has not yet been set, he said.

The first Terran R is expected to take to the skies beginning in 2024 and already has one undisclosed customer signed up for launch services using the new rocket. 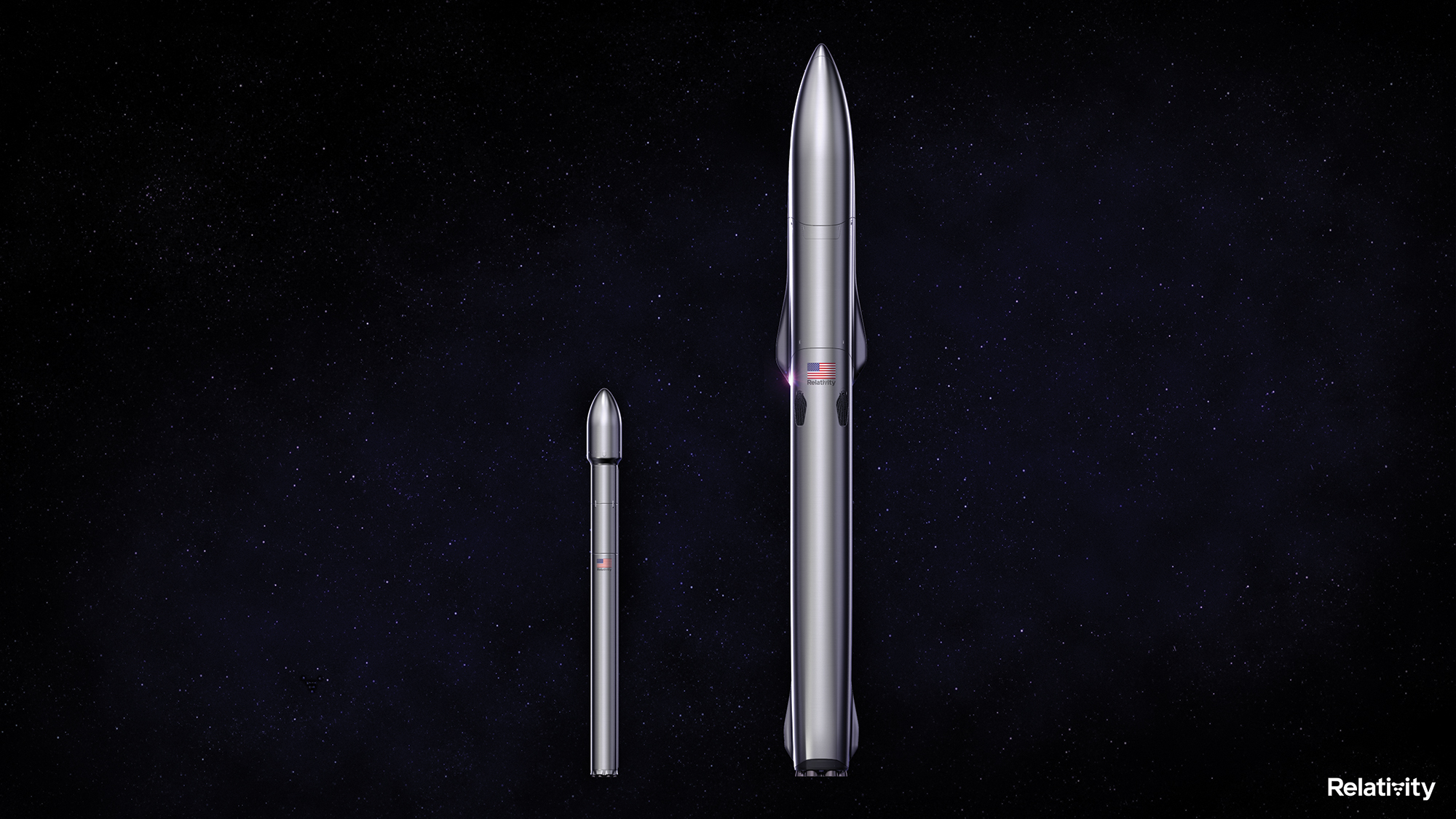 To expedite Terran R production in the new facility, Relativity raised $650 million in a Series E equity funding round led by Fidelity Management & Research Company. To date, the company has raised $1.3 billion and its total valuation stands at $4.2 billion, according to Ryan.

Originally founded in a Seattle WeWork space by Ellis and Jordan Noone in December 2015, the company quickly moved to Mountain View as part of the Y Combinator seed money startup accelerator program. Ellis said that for about six months he and Noone lived in a small Airbnb while developing the first Stargate prototype. During that time, the new company raised $10 million of venture capital financing, allowing Relativity to relocate to Inglewood and begin hiring staff in its first official office—a 5,000-square-foot space on Aviation Boulevard.

Relativity’s relocation and subsequent expansion in Long Beach is a continuation of a recent influx of space companies calling the city home. The aerospace resurgence was kicked off when Virgin Galactic leased a building at Douglas Park in 2015, with the site becoming the inaugural home of the company’s new venture Virgin Orbit in 2017.

In January 2019, SpinLaunch moved from Sunnyvale to Douglas Park. Rocket Lab came next, relocating its headquarters from Huntington Beach in early 2020. With the surge of rocket manufacturing companies in the city, parts manufacturers have followed, including Morf3D, a 3D metal printing company that specializes in aerospace and defense components that announced a new Long Beach headquarters in April.

“Most of our customer base is also transitioning to the Long Beach area,” Morf3D CEO Ivan Madera said during a recent economic forum.

During the same forum, Dan Abir, director of sales and marketing for M4 Engineering, said the Long Beach space sector has become a community, working with the city and together to further strengthen and expand the sector in Long Beach.

“In the space industry, what we’re doing is so challenging and so important for the future of humanity that you do see a lot of companies, while they are fierce competitors in some ways, still root each other on,” Ellis said. “We’re all part of building that future and there are not people cheering for the demise of any company but actually wanting the whole industry to be strong and successful and grow.”

A rendering of the new Relativity Space headquarters at night. Courtesy of Relativity.