Gov. Gavin Newsom unveiled a new statewide strategy to address homelessness and mental health issues last week that could include court-ordered treatment plans for the state’s most severely disabled residents. Next week the Long Beach City Council could direct city management to look at establishing a version of the program in the city once it’s adopted.

Newsom’s Community Assistance, Recovery and Empowerment Court, which is being called CARE Court for short, would require counties to provide comprehensive treatment for unhoused persons and those suffering from addiction or other mental health issues.

The CARE Court program would focus on people with schizophrenia or other psychotic disorders, those with substance abuse issues or those otherwise lacking medical decision-making capacity, according to Newsom’s announcement.

The goal would be to keep people out of jails by assigning them a treatment plan, and if they do not complete that plan they could be referred for a conservatorship, which could essentially strip them of decision-making power in their lives.

Family members, clinicians, counties, first responders and behavioral health providers could all petition a judge to issue a treatment plan for an individual. People assigned treatment plans do not need to be homeless. 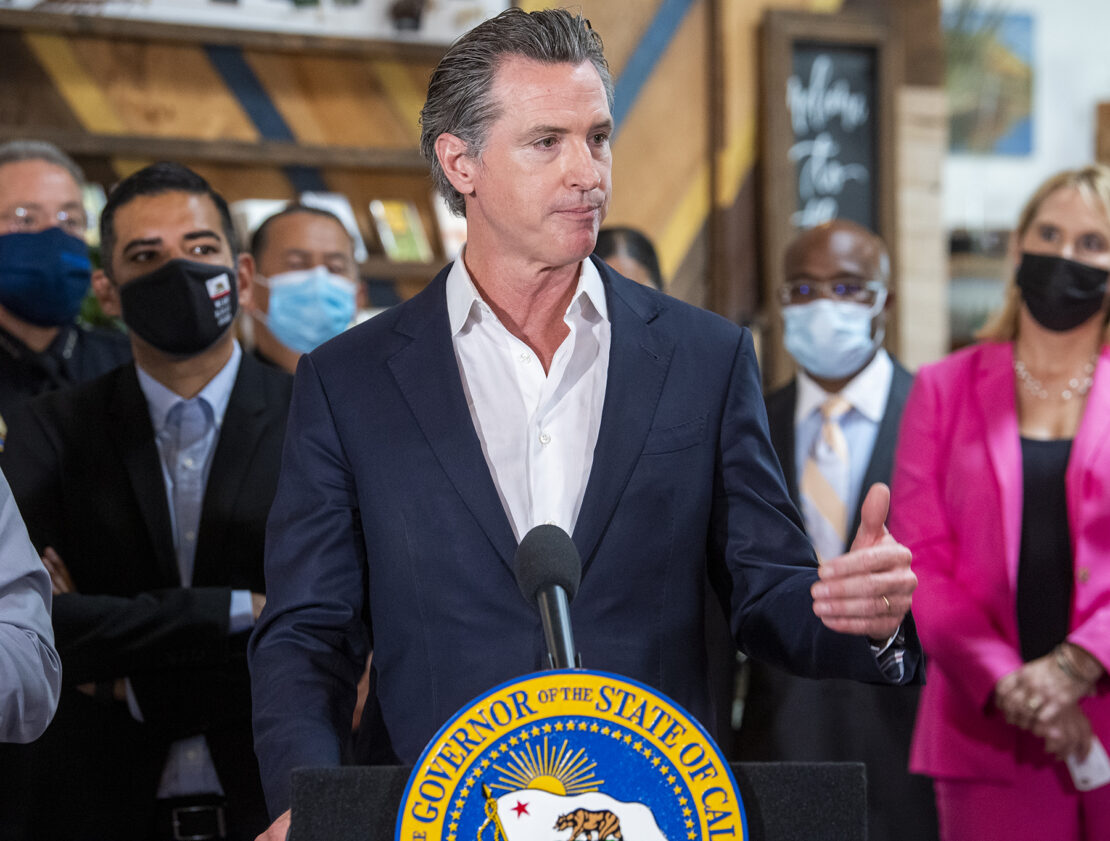 California Gov. Gavin Newsom talks to the media at a press conference in Long Beach on Wednesday, July 21, 2021. Photo by Thomas R. Cordova.

The plan still needs to be approved by the state Legislature but council members in Long Beach are already asking if the city can implement its own program administered through the Long Beach Health Department, rather than relying on the county.

“It’s not compassionate to let people live on the streets,” said Councilman Daryl Supernaw, who authored the item that the council will discuss at its March 15 meeting.

Last month, Long Beach conducted its annual homeless count for the first time since 2020 but has yet to release official numbers. The 2020 count showed over 2,000 people in some state of homelessness, a number that is expected to grow. During the 2020 survey, 24.5% of the homeless population told volunteers they suffered from a serious mental illness; 27.5% said they had a substance use disorder; and 16.8% said they were survivors of domestic abuse.

Supernaw said he supports the idea of Newsom’s program but noted that it could change substantially once the Legislature begins to deliberate over it. However, he said, something needs to change to speed up how quickly people get the services they need to stop living on the streets.

Currently, he said, the city often cites a statistic that staffers have to make contact with a homeless individual around 17 times before he or she accepts help.

“We’ve used that stat a lot, but what we don’t say is when do those contacts happen?” Supernaw said. “If that’s one contact a day, that’s just a couple of weeks. But that’s not what happens. Those contacts are spread out.”

Supernaw is calling for the city to support the legislation proposed by Newsom.

Supernaw’s council item is being supported by Councilwomen Cindy Allen and Suzie Price. Price, a senior district attorney in Orange County, said in a text message that she is focused on homelessness and public safety strategies that actually work, like expanding unarmed mental health crisis teams and the proposed CARE Court program. Price is also running for mayor.

Allen and others say the complaints they get to their offices daily about homelessness and mental health issues in the city have become more frequent in the past few years.

“I think at the end of the day if we can get more resources and more help for mental health it would be great,” Allen said.

Newsom’s announcement was endorsed by mayors of some of the biggest cities in the state, although details of how the program would roll out and the cost were not included in the governor’s announcement.

Long Beach Mayor Robert Garcia was not among those who endorsed the program and has not signaled any kind of public support for it since Newsom’s announcement last week.

James Ahumada, who was recently appointed as Garcia’s new chief of staff, said in a text message Garcia had a prior commitment that prevented him from being at the Big City Mayor’s roundtable to discuss the proposal, but Garcia supports programs like CARE Courts and is looking forward to the discussion next week.