In a corner of North Long Beach just before dawn, Long Beach Police Patrol Resource Officer Abe Mercado and Quality of Life Officer Alfonso Navarro approach a man lying on a purple couch cushion on a patch of dirt in a makeshift camp.

His belongings sat in a nearby shopping cart.

“You got any Narcan?” he asks, referring to the lifesaving nasal spray that can rapidly reverse opioid overdose. “We’ve already had a couple overdoses.”

The man, 38-year-old Jacob Lansdale, said he’s been on the streets for several years. Originally from Missouri, he said he struggles with mental health issues and is trying to get help.

Lansdale was one of the many people experiencing homelessness who were counted on Thursday as part of the annual point-in-time homeless count. The count gauges Long Beach’s homeless population and demographics to determine how much county and state funding the city’s health department will receive to help with services. 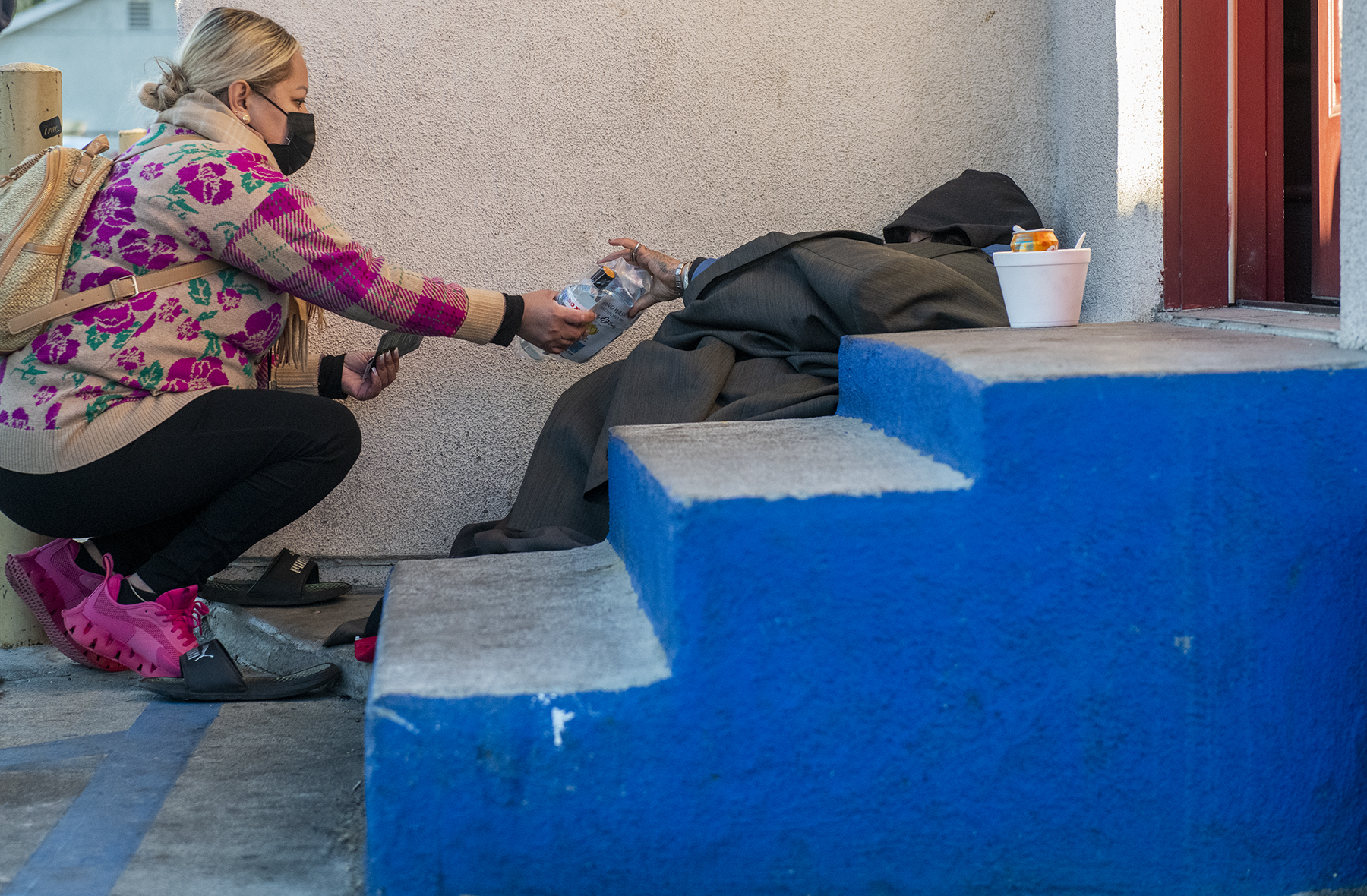 Both counts were cancelled last year due to the COVID-19 pandemic, so this year’s effort is the first to give a snapshot of homelessness in a post-pandemic world. Results are typically released in the spring.

The number of homeless who were not staying in a shelter jumped 24%, while the number of those in city shelters or transitional housing dropped 27%, due largely to the limited availability of funds for motel vouchers, officials said. 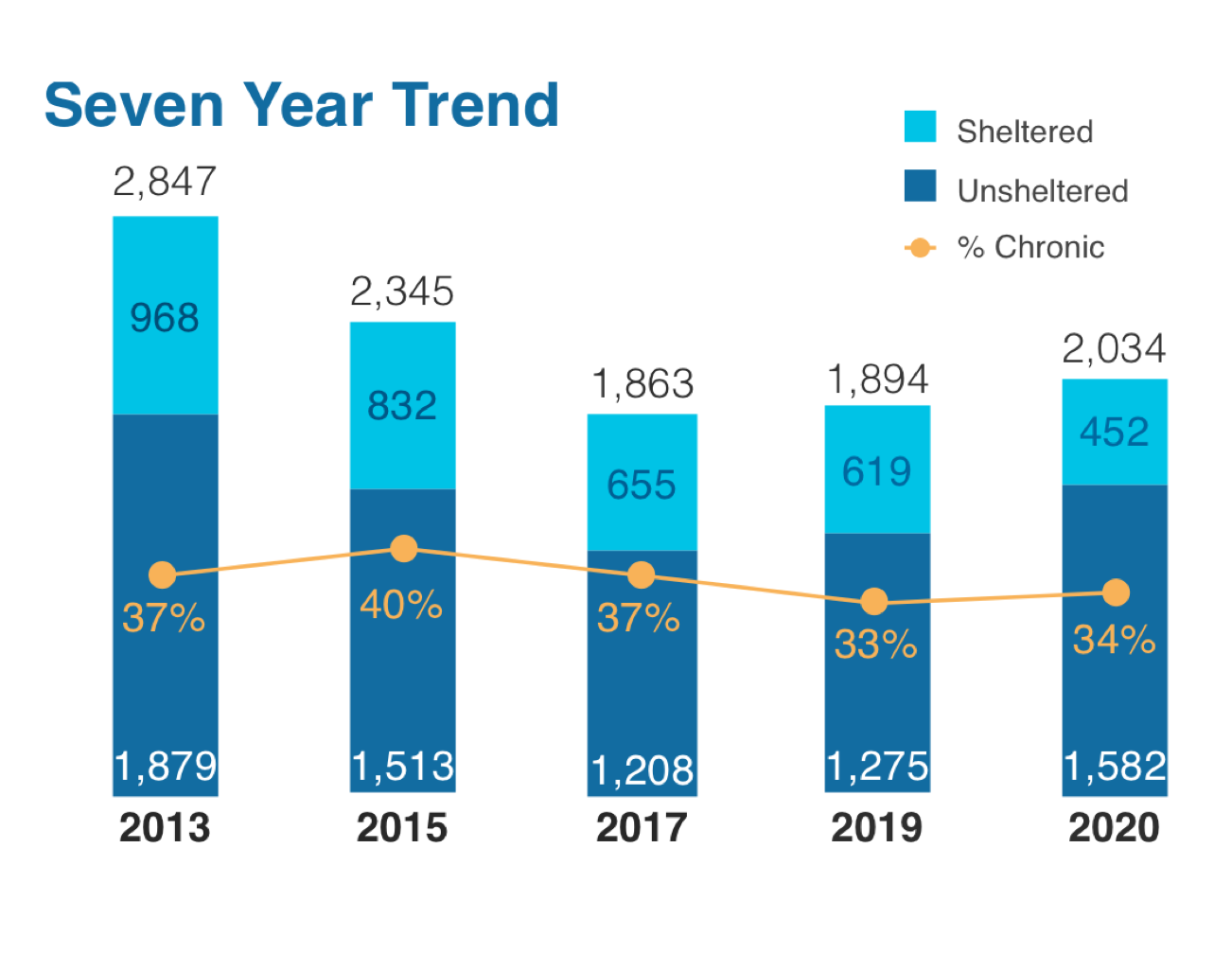 While the official numbers for 2022 won’t be released for several months, officers Mercado and Navarro, who regularly patrol the city and offer services for the homeless, said they’ve seen a significant increase in people on the streets since the pandemic.

They said they’re also seeing an increase in people from outside of Long Beach, and in many cases, outside of California.

In the early morning hours on Thursday in 30-degree temperatures, roughly 250 volunteers fanned out across the city to interview the homeless and offer services. Using a phone app, they collected information including gender, sexual orientation, race and background. 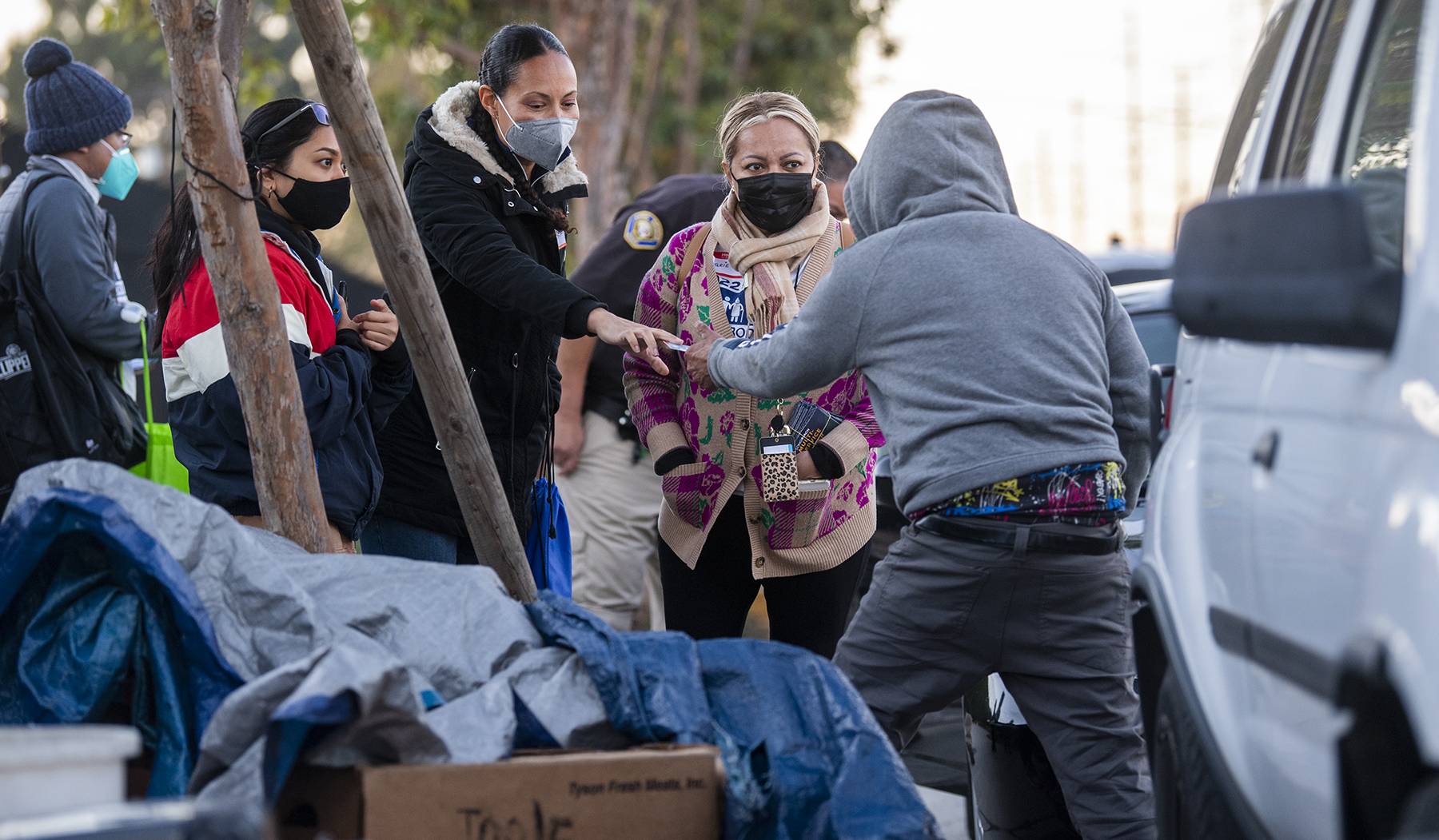 In a blue tent along the railroad tracks in North Long Beach, volunteers met 41-year-old Ryan, who was born and raised in Los Angeles. Ryan said he graduated high school and studied speech communications in college before a neck fracture caused his life to take a turn.

As volunteers surveyed the encampment where he lived, asking him what someone could do to help his situation, Ryan’s answer was simple.

“Trade places with me,” he said.

Montana Garcia, the founder of North Long Beach Ministries, has been volunteering for the homeless count for many years.

She’s seen and helped the city’s most vulnerable homeless population—children, expecting mothers, even a 2-day-old newborn. Three times a week, Garcia organizes a food bank that serves over 200 people each day.

“It doesn’t matter to me what walk of life they come from. … We just want to help them,” she said.

Long Beach, like many cities, has struggled with a homelessness crisis that grew worse in pandemic as more people lost jobs and income.

“The pandemic in many ways has set us back in our efforts to address the homeless in Long Beach,” Health and Human Services Director Kelly Colopy said during a City Council meeting last year.

But in one positive outcome, the city has received an influx of federal and state funding that has allowed officials to plan for future shelters and housing. Last year, the city opened its first year-round homeless shelter and is now planning for expanded programs. 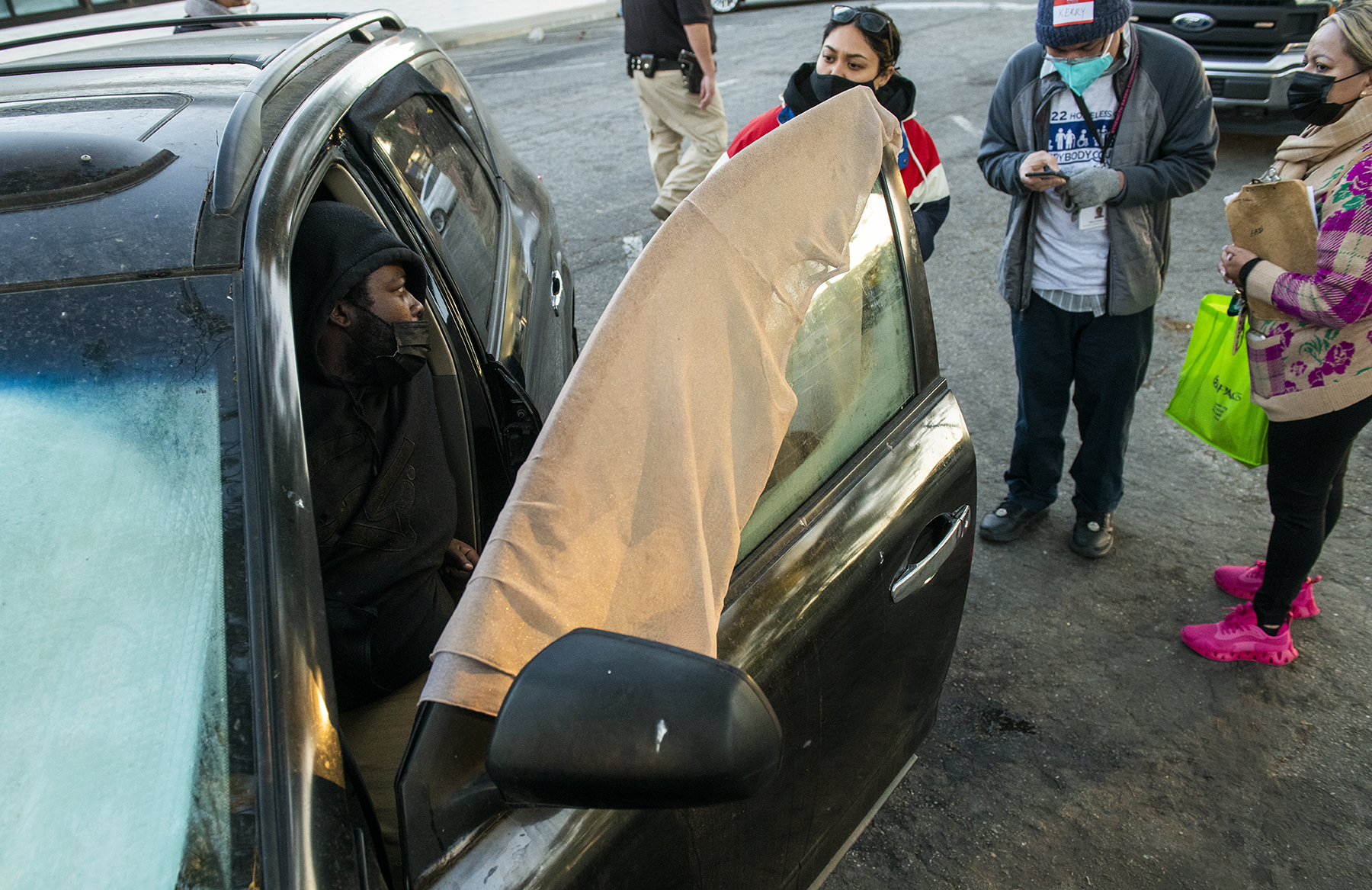 The funding is intended to help people like Derrick Lowe, who was sleeping in a nook near the corner of Carson Street and Orange Avenue on Thursday. Lowe said he’s been on the streets of Long Beach for the past 37 years.

After leaving the Coast Guard in 1985, Lowe said he arrived back to his native Los Angeles with nowhere to go and no support from his family. He soon he found himself living in the same streets he played on as a young kid.

With little resources for help at the time, he said he dabbled in drugs and became a “functional user.”

Over time, he said his crack addiction consumed him. Though he said he has managed to stay drug-free since 2009, he still prefers the concrete at night to a city shelter because there are “too many rules,” he said.

“I think neighbors don’t like me being here,” Lowe said. “I wish they could understand that a lot of people don’t like being out here. But sometimes, you know, it’s the only thing they really have and they just want to feel respected.” 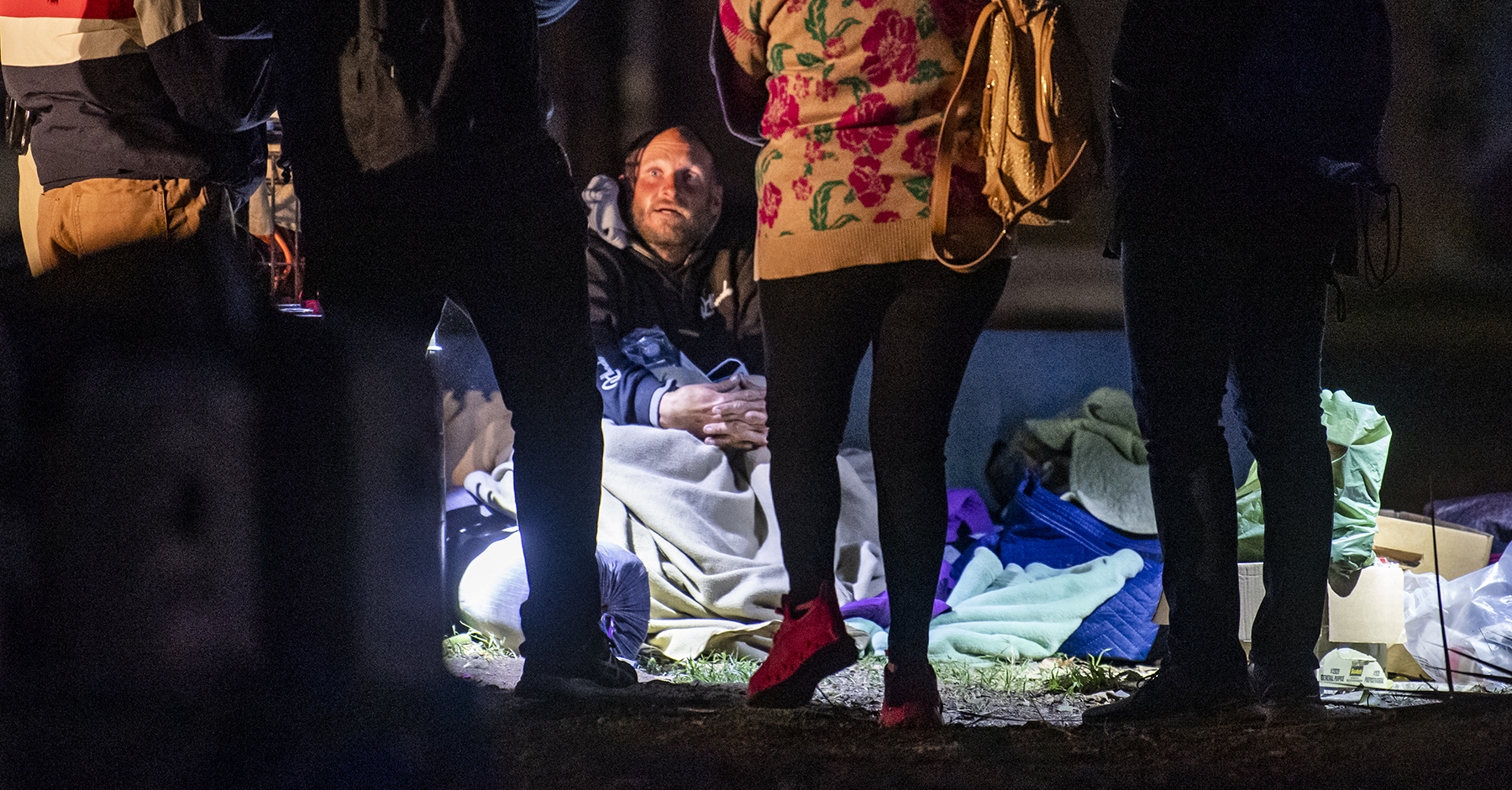