A man once hailed as one of the “tech world’s heroes” for creating a method to drastically reduce air pollution at the Port of Long Beach is now mired in bankruptcy court, facing tens of millions of dollars in claims and accusations that his business was more illusion than environmental solution.

In an era of increasingly stringent air-quality regulations, Ruben Garcia developed a bonnet that covered a ship’s smokestack while it idled in port, an innovation that promised to capture as much as 80% of its emissions.

But in bankruptcy court, one of his more than 50 creditors is alleging Garcia’s companies were a kind of Ponzi scheme, built “at the expense of employees, vendors, lenders, and investors.”

State regulators have also questioned whether Garcia lived up to his guarantees. In November, they shut down his operations at the Port of Long Beach after he failed to show his bonnet was working as intended.

Garcia didn’t respond to two requests for comment for this story. 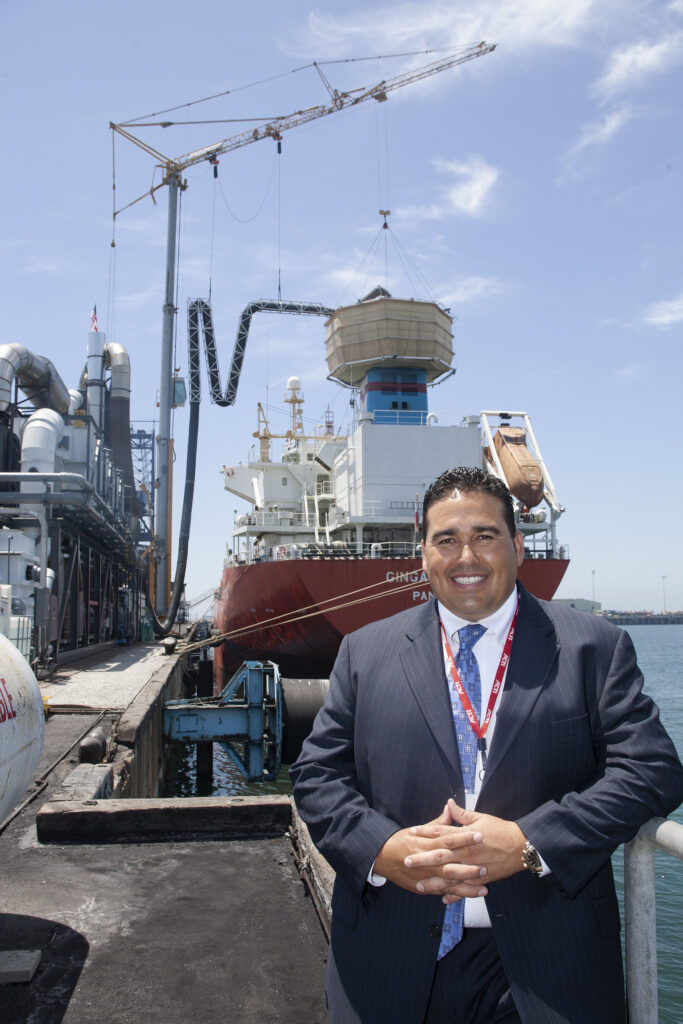 Garcia’s rise to environmental tech stardom started in 1992, when he helped form the company Advanced Cleanup Technologies. Its initial purpose was cleaning out storage tanks and engines.

In 2010, the company secured a contract with BP America to help clean up the 210 million gallons of oil that spilled into the Gulf of Mexico when the Deepwater Horizon oil drilling platform exploded.

Three years later, Garcia shifted focus to running an Advanced Maritime Emissions Control System barge at the ports of Long Beach and Los Angeles. The barge helps ocean-going vessels comply with the state’s at-berth regulation by hoisting a bonnet over the ship’s smokestack, containing their emissions while allowing them to run their engines at the dock.

Such pollution control devices are crucial to meeting California’s rigorous environmental rules. An updated regulation, scheduled to start next year, mandates a 90% reduction in ship emissions.

In 2013, Garcia embarked on a campaign efforts to get his barges operating at the Ports of Long Beach and Los Angeles.

He began some of the same establishments as Los Angeles City Attorney Carmen Trutanich, according to a May 2013 LA Weekly story. Garcia regularly palled around with Trutanich at a San Pedro cigar bar, agreed to have his company AEG give the after-school organization LA’s BEST $25,000 to help make good on a $100,000 pledge Trutanich promised to make when he broke an earlier promise not to seek office beyond two terms (though LA City Ethics Commission records only show a $10,000 donation), and had AEG fund $50,000 worth of mailers for an independent group supporting Trutanich’s re-election, LA Weekly reported.

Trutanich ultimately lost his 2013 re-election bid, and while Los Angeles port officials did agree to bring in a barge, it was one operated by Clean Air Engineering, Garcia’s competitor.

But in at least two cases, checks to Mayor Garcia ($750) and Richardson ($350) bounced, officials with both campaigns confirmed.

But Long Beach port officials did agree to work with Advanced Cleanup, and even provided $2 million in seed money to help test the system.

Not long after Trutanich’s loss, Advanced Cleanup sued BP America, alleging that it had only paid a small fraction of the $4 million it said it was owed, according to court documents filed in 2014. Both companies eventually settled two years later.

This was the high point for Garcia. After considerable testing and evaluation, the California Air Resources Board had approved his application to run the emissions control barge in October 2015, and it began operating in Long Beach Harbor shortly after that.

Garcia called the barge a “game-changer in the fields of emission control and air quality” that could remove thousands of tons of pollutants every year, in a news release at the time. Port officials agreed.

“It’s really important to have it available to vessels in the Port of Long Beach,” said Matt Arms, the port’s environmental planning director.

Good publicity started rolling in soon after the barge began operations. The Los Angeles Business Journal profiled him. Grist magazine even reported that Garcia envisioned operating a fleet of 20 barges.

“We’ve come to think of the tech world’s heroes as well-educated, creative people who dream of saving our world with their ideas,” Grist reported on March 24, 2016. “Ruben Garcia’s story is nothing like that. Born in Mexico, he grew up as an undocumented farmworker, picking onions when he was just 5 years old, and never attended college. But Garcia’s remarkable innovations are helping to clean up the shipping industry.”

But at the same time, Garcia had stopped paying some bills, according to court records (though they aren’t specific on why he stopped). Just a year after his barge started operations in Long Beach, Judge Christina Snyder attached two earlier creditors of Advanced to the BP America case and ordered Garcia to pay them. But when Advanced deposited a check for its portion of the settlement, it bounced, according to court documents.

Snyder then found Advanced in contempt and ordered it to pay a $250 fine for each day they were out of compliance with her 2017 order to pay the two creditors.

According to Carmen Batriz, one of the creditors, the company has never paid those fines. “Ruben Garcia has not appeared and has not paid any portion of the fine ordered by the court,” she said in a July 13 email. “As of this date, the accumulated amount of the court-ordered fine would be $310,500.00.”

As for the actual settlement with her, Batriz said that the company “paid $18,944 and failed to pay the balance of the settlement amount of $33,000.”

A June 2021 court filing from Garcia’s attorney lists more than 50 creditors, including investors, various tax collectors, attorneys and utilities. (One of the investors suing Garcia in bankruptcy court is Pacific6 Environmental LLC, which is a subsidiary of Pacific6, owner of Pacific Community Media, the parent company of the Long Beach Post).

A bankruptcy court filing in March from Signal Hill-based GOLO Inc. estimated “well in excess of $70 million” in unpaid creditor claims for Garcia’s companies over the last two decades. The documents paint Garcia’s businesses as something akin to a Ponzi scheme.

“But instead of running and growing the businesses prudently and honestly, Garcia dangles them as bait to attract ever more loans and investments from existing and new lenders and investors,” states the GOLO filing. “Over the years, the Debtors, with Garcia as their mastermind, have sucked in capital at an incredible rate, but collectively provided creditors and investors with almost nothing in return.”

GOLO’s filing further alleged that Garcia has “dazzled” a wide variety of investors, not all of whom were wealthy, “with his illusory promises of if only he had an immediate short-term infusion of cash to meet imminent operational needs, his business ventures would be immensely successful and help solve vexing environmental problems and benefit the community and mankind.

As for Garcia’s emission-controlling barge in the Port of Long Beach, that’s currently idle at Berth T126, according to port officials, it’s authorization was revoked by the air resources board late last year.

Their reason was that as early as 2016, board officials noted that Garcia’s company was sending insufficient data on how the barge was reducing nitrogen oxide emissions, meaning the air resources board was “unable to confirm the effective operation” of the barge, according to board records. Board officials were also concerned about Garcia’s failure to explain a 2017 equipment failure that could have degraded the barge’s emissions control capabilities.

These concerns got to the heart of the reason the barge existed in the first place: the air resources board authorized it to be a compliance measure, a way to help cargo ships clean up their toxic emissions. But if the barge wasn’t cleaning emissions in an effective way, there was no reason for it to be at the port.

Board records show Garcia and various board officials traded correspondence on the matter for four years, from 2017 to the middle of 2020, but Garcia never sent the required data to their satisfaction. By the end of 2020, board officials told Garcia to shut down the barge.

Port officials say they’re committed to having a similar barge in operation soon, from either Garcia or another operator.

An air resources board spokeswoman confirmed that Garcia applied to restart barge operations, but wouldn’t comment on the process due to business confidentiality concerns. Garcia’s bankruptcy case, in which he could owe as much as $70 million to creditors, is continuing.