How traumatic images impact us, for better and for worse • Long Beach Post News
- ADVERTISEMENT -
Help us light up the city; Add your home to the 2022 Holiday Lights map. CLICK HERE

The striking image of a lone man standing before a fleet of tanks in Tiananmen Square on June 5, 1989 brought worldwide attention to the plight of pro-democracy demonstrators in Beijing. Now, 21 years later, a nearly 9-minute video of George Floyd, a black man, being suffocated by a white police officer in Minneapolis has led to protests across the country, some of which were followed by looting and destruction.

These images, though violent and disturbing, have the effect of waking up the public. But they can also lead to lasting trauma, mental health experts say, especially when they’re replayed over and over.

And the current civil unrest is also happening in the midst of another extraordinarily rare event: A global health pandemic and economic collapse.

“People in the last three months, if they’re watching the news, have been watching people die,” said Christina Miller, clinical psychologist and president of Mental Health America of Los Angeles.

“When people experience violence, or witness violence, there are reactions that can happen from watching it, and a video is so real,” Miller said. “Seeing that, even though they are not there on the street, they are still witnessing it.”

When people see violent acts such as murder, they can experience a host of symptoms ranging from trauma, numbness, depression and anxiety, she said.

But as traumatic as the videos and images can be, Miller concludes that it’s necessary to document those instances of police force.

“The image of Floyd dying are so painful for everyone,” she said. “But the video led to the protests we have today, which give us real hope for a change in our society tomorrow.”

Long Beach was among the many cities where demonstrations took place. Thousands organized along the streets Sunday to express their disapproval of the ways police use force. The images captured during that protest showed the wide array of emotions the community is going through.

Kevin Anderson was photographed as he stood face-to-face with the police line as a single tear rolled down his cheek. “Trauma is our history,” he later told the Long Beach Post. 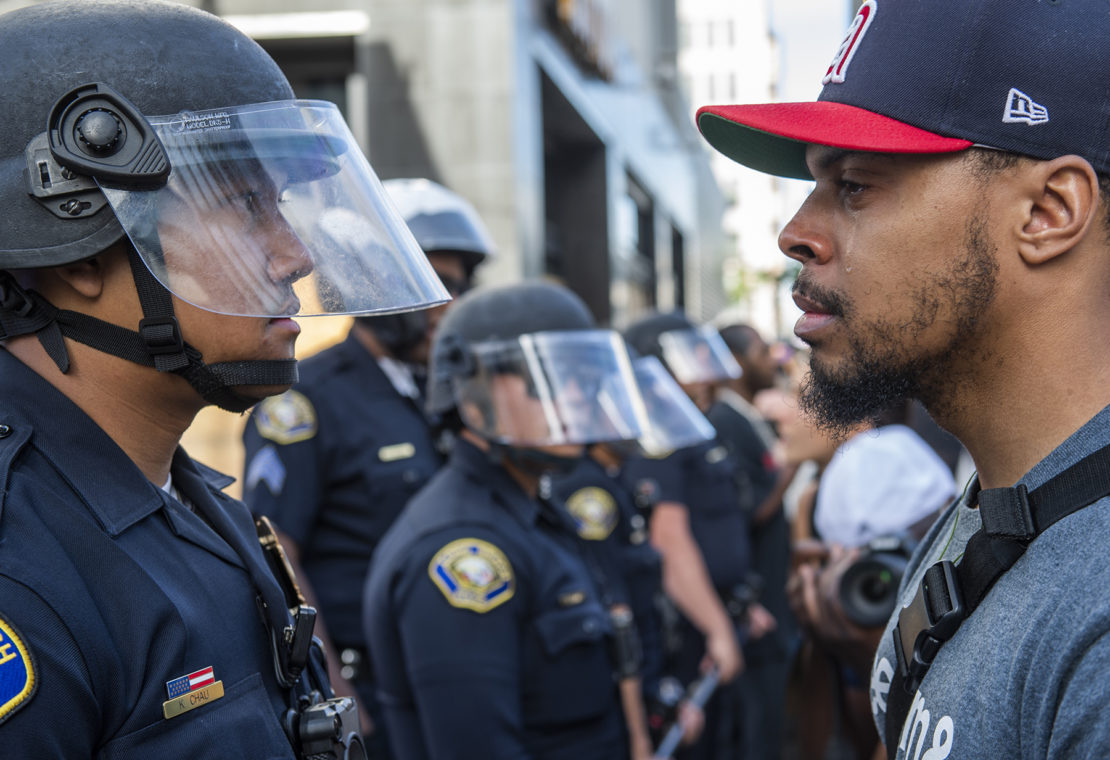 Kevin Anderson stands toe to toe with a Long Beach police officer as he sheds a tear during a Long Beach protest over the death of George Floyd, May 31, 2020. Photo by Thomas R. Cordova.

In a separate photo, taken by photographer Richard Grant, a man with a child on his shoulders stands before a police line as an officer points a less-than-lethal weapon toward the crowd. The image sparked outrage from the community and is under investigation by the Long Beach Police Department, despite the photographer saying the officer wasn’t aiming at the child. 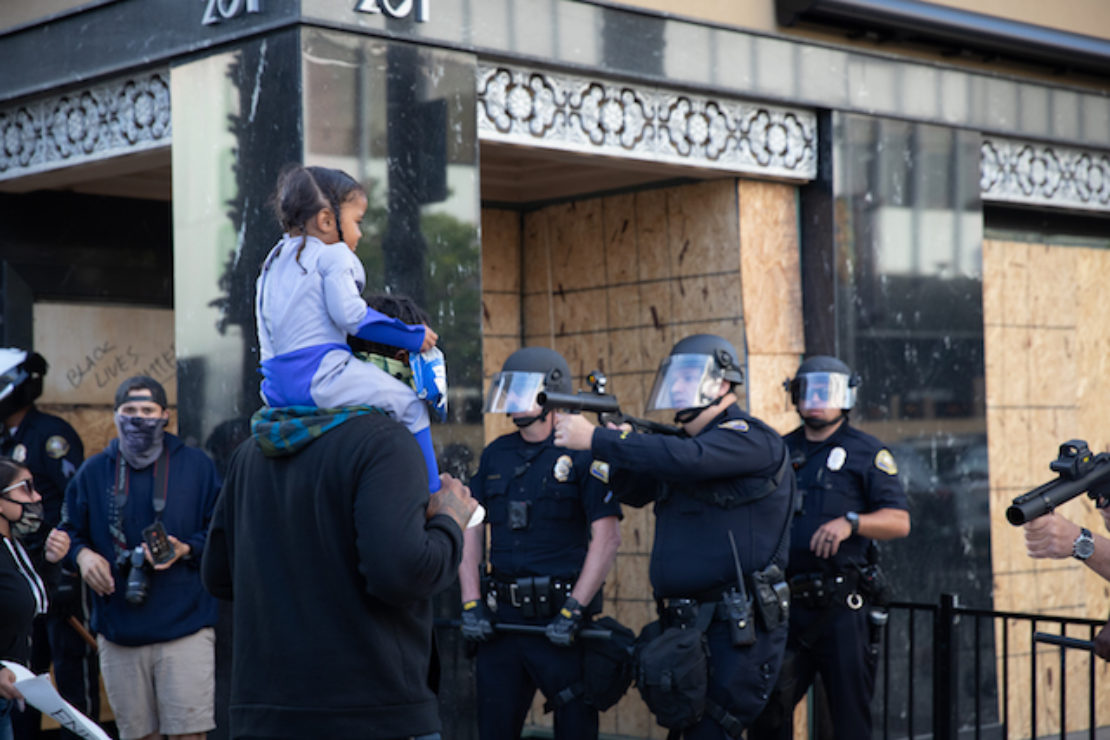 The unedited version of the now viral photo of a man holding his child while standing in front of a police line with officers’ weapons drawn during a protest against police brutality in Long Beach on Sunday, May 31, 2020. Photo by Richard Grant.

Patricia Costales, CEO for the Long Beach-based Guidance Center, said she’s “quite worried” about local families and children who find themselves exposed to these images without the safeguard of school and youth programs, which are still off limits thanks to the COVID-19 pandemic.

The confluence of the pandemic and the civil unrest has made 2020 a difficult year for many.

“We have a very high percentage of families who are food insecure, to now have parents who are leaving their jobs; that, of course, has a traumatic impact on children,” she said.

Costales recalled wrapping up her internship the day the 1992 Rodney King riots in Los Angeles erupted. She also worked in the field counseling families during the 2008 economic recession.

“As a child therapist, I absolutely saw the destabilizing impacts to the children that I served and the communities that I served,” she said.

Despite her previous experiences working in turbulent scenarios, Costales said nothing like what has culminated in recent months had ever happened before, and the implications to the community’s mental health were troubling.

“We’ve never been through––except people who are 100 years old––a pandemic. It’s unprecedented,” Miller said. “We have this pandemic backdrop and we have African Americans being killed. I think people are saying, ‘We’ve been through this before; we’re still here and nothing has changed,’ and I think that affects their mental health.”