For 65 years, Huff’s Family Restaurant has stood at the corner of Wardlow Road and and Norwalk Boulevard serving family fare and diner-style staples to loyal customers, but two weeks ago it closed its doors, and barring a small miracle, it may never open again.

Gayle Duhem, who her staff affectionately calls “Big Red,” has worked at Huff’s for 28 years. She started as a waitress before advancing to manager, and for the  past 10 years she’s owned the restaurant that she described as a place where you could take a family or come in by yourself and become family. It was filled with “her people.”

“When you love to go to work every day, that’s something,” Duhem said.

But recently Duhem had to let go of 20 members of that family because she’s tens of thousands of dollars in debt, something that could force her to say goodbye to the place where she loved to work for the past three decades. The thought of it, to her, is devastating. 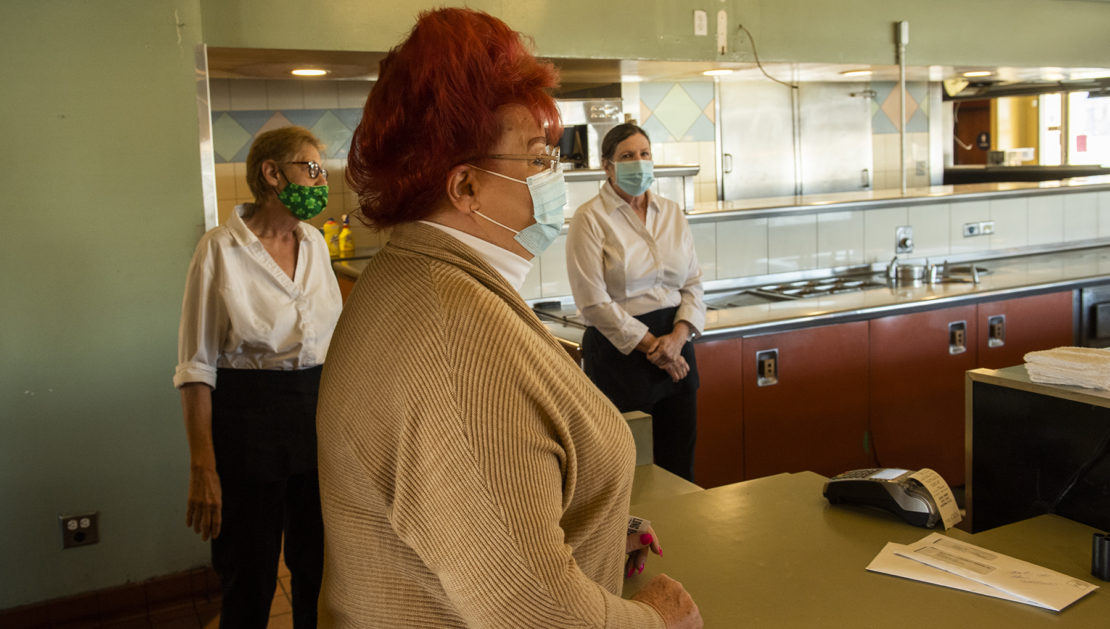 Gayle Duhem, 74 center, stands where the register used to be as two waitresses, Michell Lanni, 63, left and Vicky Donnelley, 62, who have both worked at the now-closed Huff Family Restaurant for over 20 years in Long Beach Friday, March 5, 2021. Photo by Thomas R. Cordova.

Like many other businesses, Duhem’s has been hammered by changing COVID-19 regulations, openings and closings, and in Huff’s case, proximity to Orange County, which has had more lenient rules for restaurants, and less enforcement of them than in Los Angeles County.

As the pandemic began to take its firm grip on the local economy last year and restaurants were forced to close, she almost immediately began pouring money into the restaurant. Limited to take-out, she invested in boxes, soufflé cups and “individual everything.”

She applied for federal COVID-19 relief funds but got nothing. The cost of food grew when she was no longer buying food from her distributor because large portions purchased at a savings were now a liability amid evolving COVID-19 policies. The costs continued to pile up.

When the state closed outdoor dining the day before Thanksgiving, it was a backbreaker for Huff’s. Duhem said she had bought about $3,000 worth of turkeys in anticipation of orders from the many seniors and singles she serves. In 2019, Duhem sold 160 turkeys, this year the number was zero, she said.

When outdoor dining was once again allowed in the county, she put seven tables on her outdoor patio. When inspectors said that they were too close, she reduced them to five. Some people would show up hoping to eat indoors only to learn that the restaurant was in Long Beach and they would leave.

“We did everything we were asked to do and you could walk across the street and go inside and eat inside,” Duhem said. “What happens in the middle of the street that on our side, we can’t open, and on the other side they can?”

A last-ditch effort started by a long-time customer last month is seeking to crowdsource $45,000 to help keep the East Long Beach restaurant open. Christy Ur grew up going to Huff’s and her dad has known Duhem for the past 50 years.

When Ur heard that the restaurant was in danger of closing she wanted to do something to prevent the pandemic from taking a treasured childhood memory.

Duhem said Huff’s is the kind of place where you could pick your own seat and some of the best selling sandwiches—the Ralph—are named after the regulars who created them. And the Ralph is made with real turkey, roasted in house, not the pressed or “sawdust” you’ll find other places, she proudly pointed out.

She’d like to be able to be able to open her doors soon now that COVID numbers are becoming more hopeful. The kitchen is stocked, employees are ready to come back to work but without an infusion of money, the mounting back rent and utility bills could keep Huff’s from serving another dish.

If that’s the case, Duhem said she just wants “her people” to know how much she cared about them.

“We just love these people and we hope they appreciate that,” Duhem said. “They weren’t just a customer when they walked in. They were our friend.” 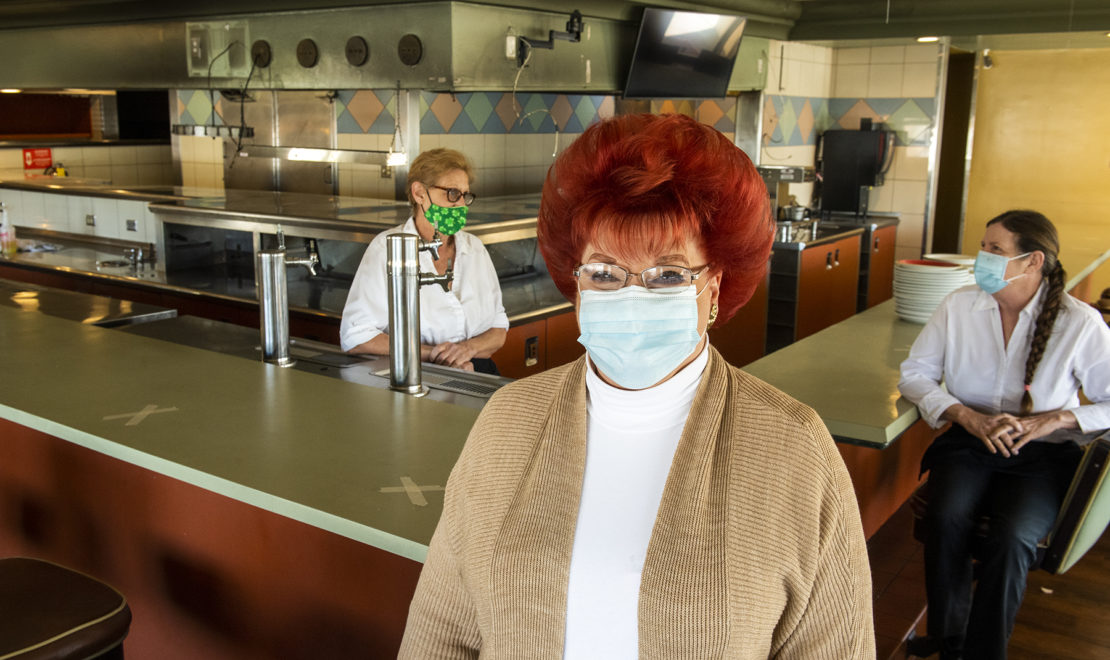 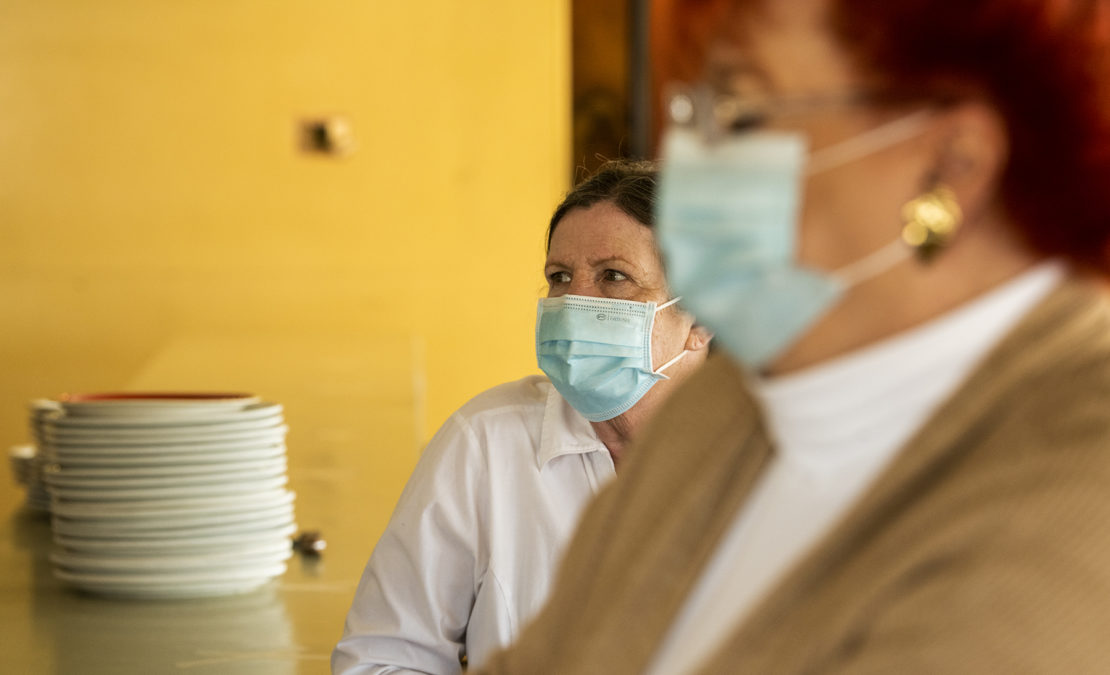 Vicky Donnelley, 62, left, sits at the bar as she and Gayle Duhem, 74, and one other waitress talk about past times at the now-closed Huff Family Restaurant in Long Beach Friday, March 5, 2021. Photo by Thomas R. Cordova.