Long Beach health officials have partially abandoned a state-run COVID-19 vaccine appointment system because it was letting too many ineligible people sign up for shots.

The state’s reservation system was so porous that city-run clinics would have leftover vaccine doses after screening out people who tried to jump the line, a city spokeswoman said.

To combat this, the city on Thursday invited seniors 65 years and older to simply wait in line at the city’s Convention Center to potentially get vaccinated without having an appointment. Today, the city is hosting a similar event for food workers from 11 a.m. to 5 p.m. at the Convention Center. They will be administering 500 shots to whoever gets there first and can show they are eligible.

Jennifer Rice Epstein, the spokeswoman for Long Beach, said the city was hosting these types of events because they were turning away so many people who’d been able to book appointments for shots but then weren’t able to prove they were eligible when they arrived. 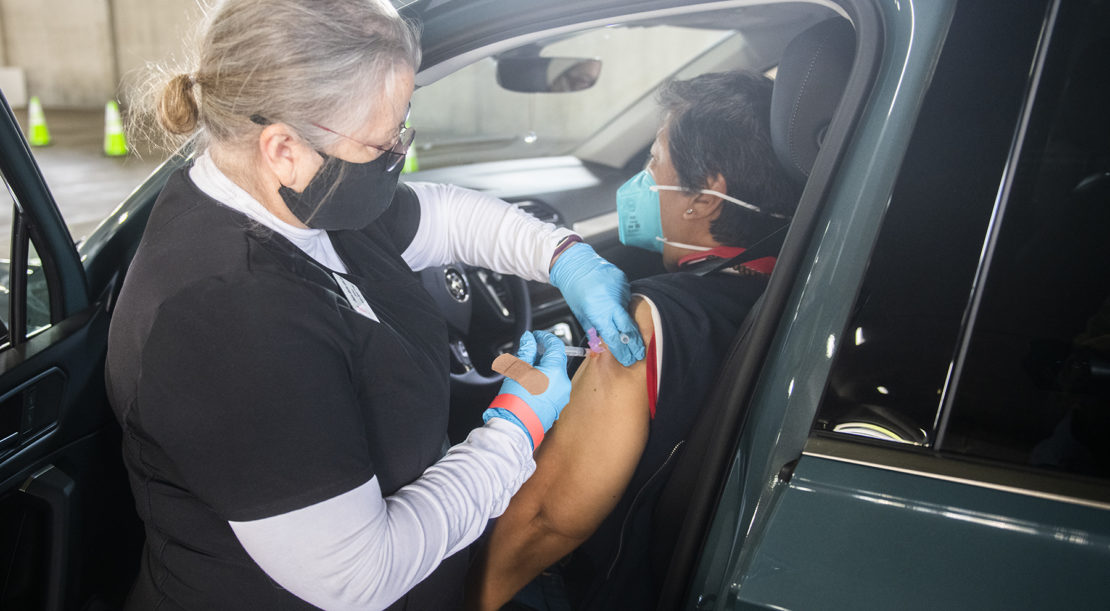 Currently, the only people allowed to get vaccines in Long Beach are health care and emergency response workers, those 65 and older, food and agriculture workers and those in education.

The city has been—and still is—directing those people to book appointments through the state’s MyTurn or CalVax website, but local officials have said the website doesn’t properly screen out ineligible people and allows anyone with a link to that day’s appointments to reserve a spot.

Because the site is state-run, Long Beach Health Department Director Kelly Colopy said the city is not able to control how many people are sharing links to appointment slots or how they are screened before signing up. After a person is directed to the state’s website, they are asked to check a box identifying their eligibility group, but they can simply select “other” or “other essential worker” without any verification.

This means city workers have to screen people at vaccination sites and turn away those who don’t qualify. In some cases, ineligible people have slipped through the cracks. It’s unclear how many.

However, the city also turned away so many ineligible people that there was sometimes an abundance of leftover shots, according to Epstein.

“We have had to turn many folks away due to link sharing so we weren’t using as much vaccine as we had planned to,” she said in an email.

This prompted the decision on Thursday to open up 500 no-appointment-needed slots for seniors as long as they could prove they lived in Long Beach, Epstein said.

Any eligible people left waiting in line once the city ran out of vaccines received help to sign up for an appointment at a later date, according to Epstein.

“We also hope this will help bring out more folks for whom the registration process is difficult; we’ll sign them up on site,” she said.

Officials have been sounding the alarm for weeks now about the issues presented in the vaccine appointment system.

Problems are rampant throughout the state, and as Los Angeles County prepares to make more groups of people eligible for the vaccine, officials have pleaded with people to wait their turn and not try to jump the line.

“If you were able to make an appointment but you’re not in one of the eligible groups, please cancel your appointment,” she said. “Don’t take away an appointment from an eligible worker and please don’t come to the vaccination site, because you will need to be turned away.”

The porous reservation system also adds to the problem of vaccine equity. The Los Angeles Time reported that people in more affluent neighborhoods were making appointments to receive vaccines intended for people in underserved communities.

On Thursday, Gov. Gavin Newsom announced this the state will begin setting aside 40% of all vaccine doses for the state’s most vulnerable neighborhoods in an effort to inoculate people most at risk from the coronavirus and get the state’s economy open more quickly.

The doses will be spread out among 400 ZIP codes with about 8 million people eligible for shots. Many of the neighborhoods are concentrated in LA County and the Central Valley. The areas are considered most vulnerable based on metrics such as household income, education level, housing status and access to transportation.