In April, more than a month into the coronavirus pandemic, Long Beach City College student Jonathan Ramirez found himself homeless and living out of his car.

Ramirez, 28, knew it would be a struggle, but living in a car during the COVID-19 lockdown posed an extra challenge. He couldn’t do school work at coffee shops or shower at the gym because everything was closed. Even finding somewhere to use the restroom was a hunt.

“There were times when I would wake up in my car in the morning and I didn’t have anywhere to go,” he said. “I was panicking thinking, ‘What the heck am I gonna do if I get sick? Where am I gonna quarantine?'”

Ramirez had been working on his associate’s degree at LBCC with the goal of eventually applying to the registered nursing program. But with no laptop or steady home, he struggled to keep up when classes went mostly virtual this semester. His grades plummeted.

Ramirez was on the LBCC website earlier this month ready to drop all of his courses when he saw a link to the college’s emergency aid program. He swallowed his pride and applied.

“Asking for help and admitting that I needed help was so hard, but I didn’t see myself coming out of this situation,” he said.

The school supplied Ramirez with a Chromebook and even found funding to help fix the transmission on his car. Within four days, he was in free student housing through a program called Jovenes, which works to help homeless youth.

Nationwide, an estimated 18% of community college students have experienced some form of homelessness, according to a 2019 survey by The Hope Center for College, Community, and Justice in Philadelphia.

LBCC estimates that roughly 10% of its students experience homelessness or housing insecurity, and many of those students are facing additional struggles in the pandemic.

And it’s not only homeless students. Community college enrollment nationwide is down this fall as students drop out in the pandemic. Fall enrollment for LBCC is down 5%, while the number of low-income students has dropped by 10%.

“We know many of our students are struggling right now,” said Mike Muñoz, LBCC’s vice president of student services.

Muñoz said the college last year began planning for a new emergency aid program under the Office of Basic Needs, which provides a one-stop shop for help with housing, food insecurity, technology, mental health and more.

The college had planned to launch its new emergency aid application online later in the year, but it sped up the process and launched in March to help students in the pandemic. With the click of a button, students can now have access to a range of emergency services.

More than 5,000 students have so far applied for some form of emergency aid this semester.

For students like Ramirez, Muñoz said the college takes a case management approach with wraparound services. This year, the college received about $2 million from the California Community Colleges Chancellor’s Office to partner with Jovenes for rapid student housing.

The college is now about to help about 40 homeless students a year with supportive housing while they’re in school. Ramirez is a model student in the program, Muñoz said.

“We were really able to reach Jonathan and help him stay on his path,” he said. “Now he can focus on school.” 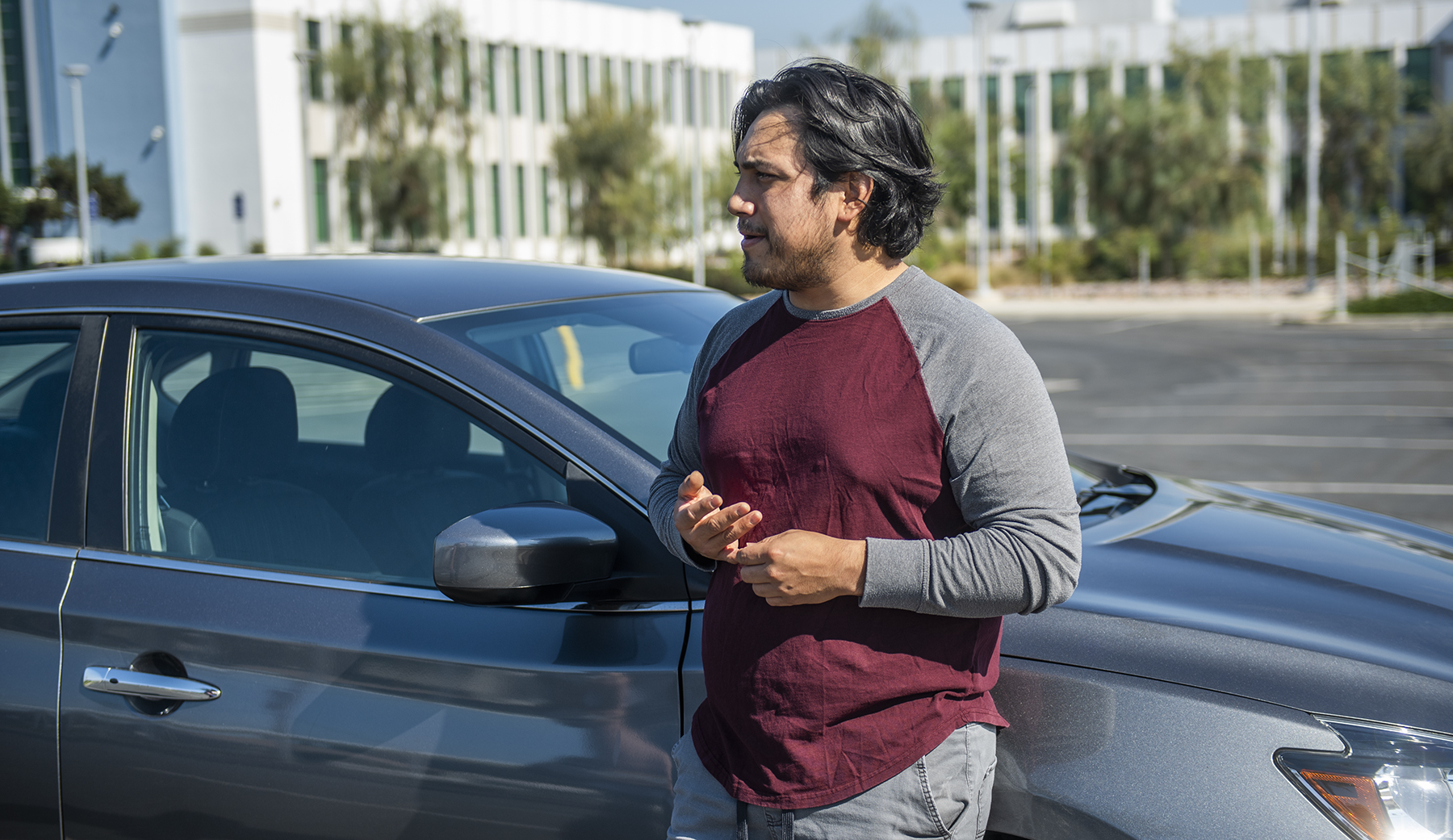 Jonathan Ramirez leans up against his car while in the parking lot of Long Beach City College Wednesday, October 28, 2020. Ramirez was a homeless college student, LBCC is assisting him. Photo by Thomas R. Cordova.

On his own since 18, Ramirez had been on the brink of homelessness before. But this year, when his roommate moved out from a converted garage they were sharing in East Los Angeles for $950 a month, Ramirez couldn’t find anything else in his price range.

“It was all so expensive,” he said.

Ramirez said his mother lives in a tiny studio in Los Angeles where he would sometimes shower, but staying with her wasn’t option.

Adding to the challenges, Ramirez couldn’t drive his Nissan sedan long distances because of its shoddy transmission, so he would park his car near his mother’s home in Los Angeles and take the bus to classes at LBCC each day.

At night he works for a temp agency putting up steel beams for Lowe’s. He studies and attends classes during the day, so there’s little time to sleep.

A South Bay native, he graduated from Hawthorne High School and at one point was part of a traveling international rugby team.

“It was an awesome experience but when I got back from traveling with the rugby team my mom had moved to Wisconsin and I was blindsided, so I didn’t have anywhere else to stay,” he said. “I haven’t really had a stable place to live since I graduated from high school.”

Ramirez said he’s been too proud in the past to ask for help.

“I cried the first time I applied for food stamps,” he said. “I just kept thinking, ‘How did I get here?'”

Ramirez said he was driving by LBCC two years ago when he decided on whim to stop and register to go back to school. He was more than halfway through his coursework to apply for the registered nurse program when he became homeless and his grades dropped.

In medical terminology class, his most difficult this fall, his grade fell to 50% and his professor suggested maybe he should drop the course.

But now, with a laptop and housing, Ramirez said his grade is back up to 90%.

Through the Jovenes program, Ramirez moved three weeks ago to a room in a four-bedroom home with three other formerly homeless students near LBCC’s Pacific Coast Campus. He also has a case manager who was at one point homeless and has been through the program.

‘We’re not just living here, we’re getting set up for success,” he said.

The program pays his rent for the next few months. Ramirez said he’s keeping his budget down to around $80 a week and believes he’ll have enough saved to get back on his feet.

In one of the biggest benefits, the college was able to give him a $1,400 check to fix his car’s  transmission, so he no longer has to take the bus. Ramirez is hopeful he can apply to the RN program next year.

“I’ve been grateful since the start,” he said. “I don’t take any of this for granted.”