'If I can do it, anyone can': CSULB grad’s journey from addict to A-student goes viral • Long Beach Post News
- ADVERTISEMENT -

It’s been a busy 24 hours for Joseph Valadez.

Valadez’s message and pictures struck a chord with thousands on social media, who saw in them a testament of resiliency, and an inspiration.

“There’s a misconception about guys like me that I want to break,” the post read. “If I can do it, anyone can.”

This man accomplished something incredible AND took the coldest pic of 2021 pic.twitter.com/V4zLJF91iv

By Tuesday morning, his story had gone viral on social media and calls from news outlets started to roll in.

“I haven’t gotten much sleep,” Valadez, calm and seemingly unaffected by the sudden wave of online recognition, said.

It’s hard to shock someone with a life story like his.

Growing up in Stanton, just a stone’s throw from Knott’s Berry Farm, the Orange County native became involved with drugs and gangs at an early age. He first became addicted to heroin, the drug that would control his life for 38 years, after joining the army at age 18.

“All the crimes I did were related to trying to get drugs, selling drugs,” he said.

In total, Valadez would go to prison 40 times before entering the Salvation Army Anaheim Adult Rehabilitation Center’s residential program and getting sober in 2013.

When he finally felt ready to kick his habit, finding help wasn’t easy.

“I tried calling around: nobody wanted me,” he remembers.

When the Salvation Army offered him a place in a one-year residential treatment program, Valadez said he jumped at the opportunity: “They saved my life.” 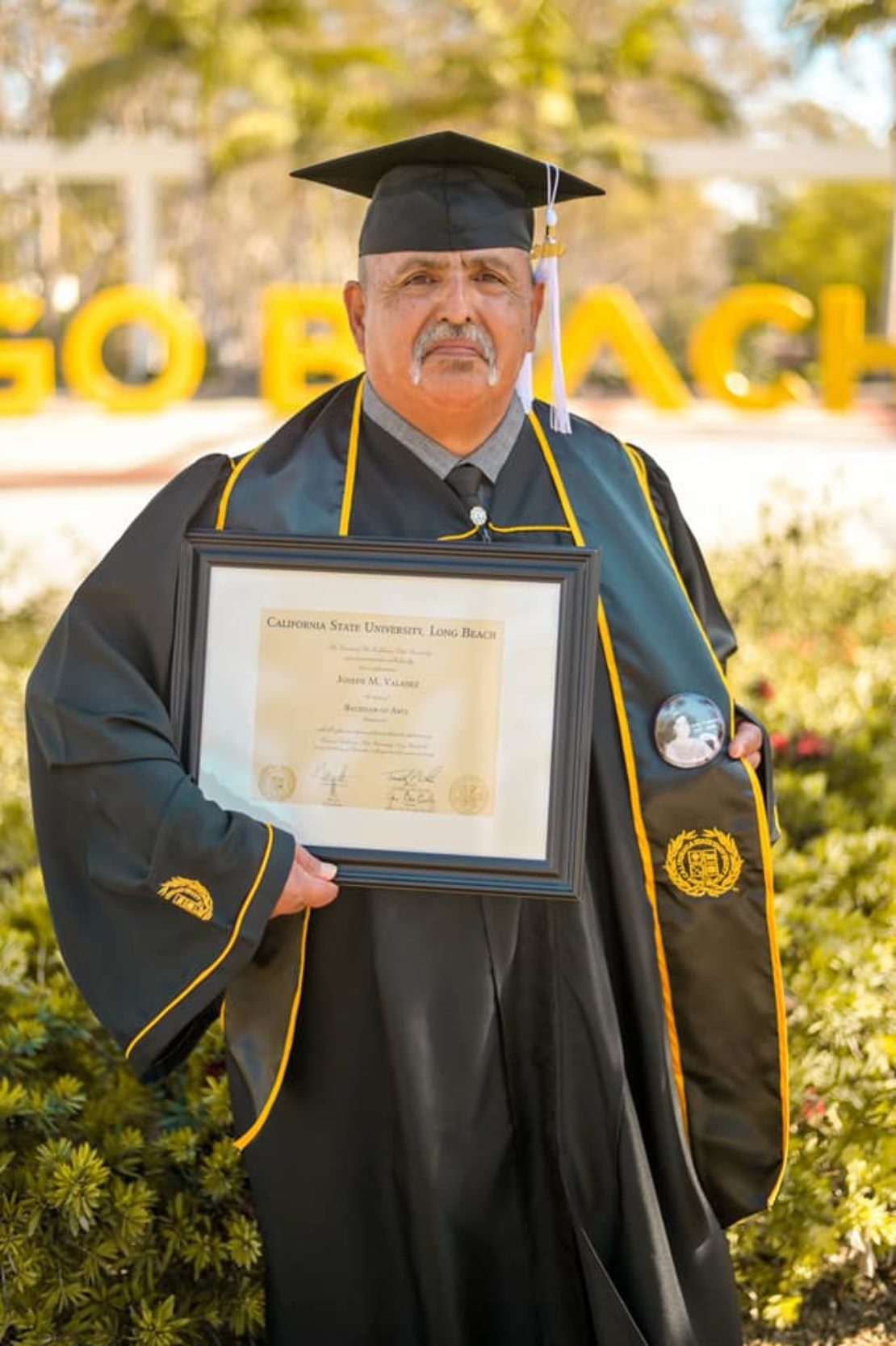 Joseph Valadez wears a sash adorned with a picture of his mother, who died 14 years ago. “I know that she’s watching me,” he said.

Going to college, first attending Orange Coast College in Costa Mesa and later transferring to CSULB, he became more aware of how the system had failed him over the years.

“I had good grades in high school,” he remembers. “Never did any of them teachers ask me whether I wanted to go to college.”

Instead, he said, he was urged to consider construction or landscaping.

When he started running into trouble later on in life, he was on his own again.

“None of the times I went to prison, nobody asked me if I wanted to go to rehab,” he said.

But in the end, he said, his lived experience helped him in his sociology studies, where he wrote papers about the way racial discrimination in the criminal justice system and beyond has put people of color at a disadvantage.

“I know a little bit about that subject,” Valadez said, adding that his experience motivated him. “Because I lived it, I wanted to understand the ‘why?’.”

After graduating with a 3.67 GPA and a spot on the president’s honor list, Valadez is waiting to hear whether he has been accepted into CSULB’s graduate program for social work. He wants to focus on helping at-risk youth.