Long Beach now has an inclusionary housing policy that will extend to the entire city after the City Council unanimously approved the program, which will require developers to reserve a percentage of new units for lower-income households.

New residential construction projects started after January 2021 will now be required to set aside some units for lower income tenants.

While the policy would be automatically mandatory in the Downtown and Midtown corridor, which follows the Long Beach Boulevard corridor north to Wardlow Road, the rest of the city would only have the policy triggered by any development that requires site-plan review. 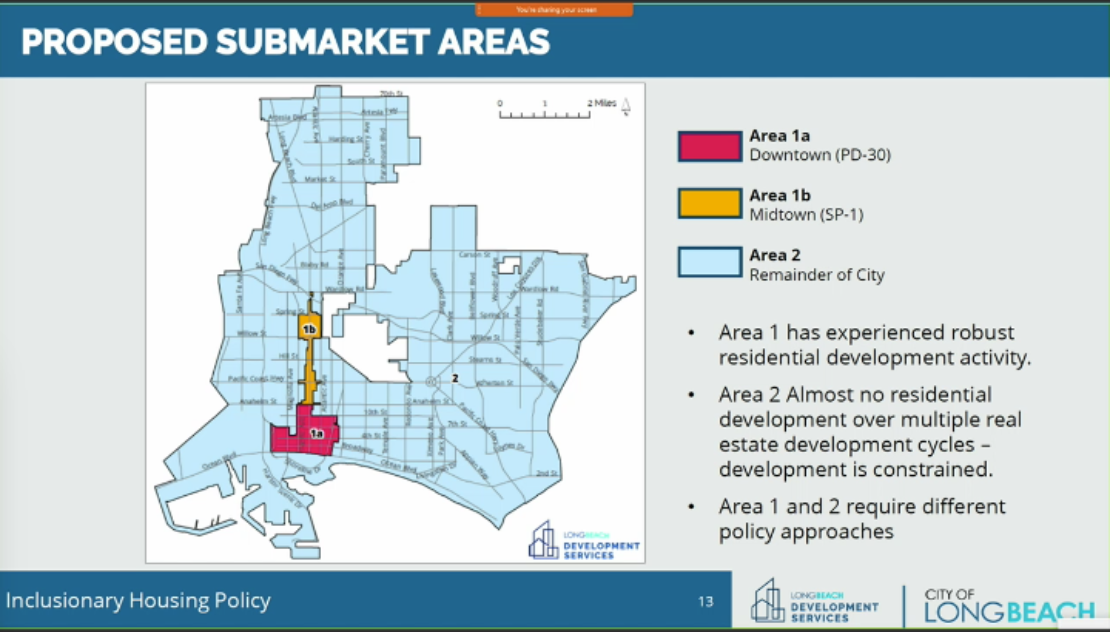 A screenshot of the two areas the city was broken up into in the inclusionary housing policy. Downtown and Midtown (red and orange) would have mandatory requirements automatically built into projects.

The covenants for those projects would last 55 years and the program would be phased in over a three-year period with the the final set-aside amounts of 11% and 10% being reached in 2023. The original proposal called for a four-year phase in.

Many of those amendments were proposed by Councilwoman Jeannine Pearce, whose district includes Downtown Long Beach. That area was set to be one of the most affected areas of the city under the recommended proposal, which would have tied the inclusionary policy to the Downtown area and the Midtown.

“We have a homeless crisis that’s already here and on the cusp of getting worse,” Pearce said. “We know that we have a great need for this population and there needs to be additional resources for this.”

Pearce pushed for the covenant to run for 55 years instead of the recommended 45 years. She also asked that the fee developers can pay to avoid setting aside the low-cost units to be equal to the cost of producing the unit. That fee would be deposited into a city account that will go toward the construction of affordable units elsewhere.

“Our focus is on having the housing built, and included in the projects that come forward,” said, Christopher Koontz, Long Beach’s Deputy Director of Development Services. “That is the goal.”

Koontz had pushed back on the request to eliminate or shorten the phased-in approach because of the shock it could introduce to the housing market. He said the proposed policy struck a balance between housing needs expressed by the community and market forces. While the timeline was reduced by one year, Koontz cautioned that doing away with the slow rollout completely could have negative impacts on the council’s goal of creating more units, affordable or otherwise.

Housing advocates who had pushed for a policy that went into effect faster and targeted those most in need largely viewed the vote as a victory, but they were cautiously optimistic about how the policy would apply citywide.

“We are thrilled that after decades of fighting for an inclusionary housing policy in Long Beach it has finally become a reality,” said Susanne Browne, a senior attorney with Legal Aid Foundation of Los Angeles, a member of a housing rights coalition. “We are extremely happy that the policy will target all of the affordable rental units to Very Low Income families, as these are our residents most in need. With COVID’s disproportionate impact on our Black renters, this is particularly important at this moment in time.”