But when the 64-year-old recounts the precise moment a social worker at the Long Beach Multi-Service Center told her she could move out of her car and into a small room at the Coast Motel near the Traffic Circle, Sesson is so overtaken she struggles to catch her breath.

“I cried with him that day, I was so thankful,” she recalls, breaking into tears again at the memory. She had been living in her 2004 Honda CR-V for over a month, unable to take a single full shower.

Soon she’d be on the move again as years of loss swiftly gave way to hope, thanks to a new form of homelessness intervention. A few miles from her temporary housing at the Coast, Sesson was offered a room to make her own through a statewide program called Project Homekey.

At the former Best Western on Long Beach Boulevard—one of three hotels and motels purchased by Long Beach and Los Angeles County at the end of last year—she has finally found a place that feels safe, clean and promising.

“It feels like home,” Sesson says with gratitude, as she sits on a couch in the hotel’s former breakfast room, now a makeshift case management office. 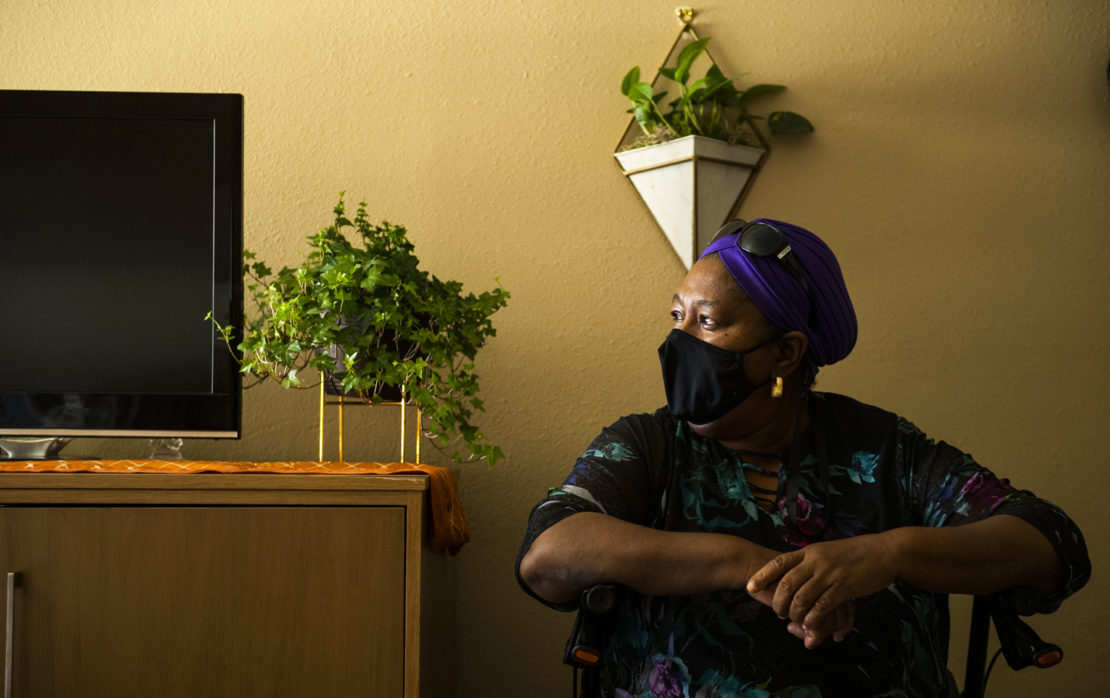 Beverly Sesson is surrounded by her house plants as light from the window enters the room on Monday, April 5, 2021. Photo by Thomas R. Cordova.

Using $800 million in state and federal dollars, Project Homekey has created thousands of units across California by funding the purchases of hotels and motels to house homeless people.

Most facilities in the program so far have focused on housing a specific and exceptionally vulnerable segment of the region’s legions of unhoused—people who are over 65 or have pre-existing health conditions that put them at the highest risk of contracting COVID-19.

A 2019 report by the LA County coroner’s office reported that homeless women have an average age of death of 48. Homeless men, on average, die at 51. By comparison, today’s average life expectancy in LA County is 82.

Yvette Ahlstrom, vice president of Orange County operations at the Illumination Foundation, which runs the city-acquired site where Sesson now lives, puts it simply: “Their lifespan is shorter because of how hard their life is.”

In Los Angeles County, 1,625 units have been created at 25 locations, according to the most recent numbers published by the California Department of Housing and Community Development.

In Long Beach, besides the Best Western, a former Holiday Inn and Motel 6 have been converted into housing for homeless individuals. At a total cost of $49 million, the three city sites added approximately 280 units with a variety of supportive medical and social services.

At the moment, the Best Western is at 90% capacity. The county-owned Motel 6 is at 93% capacity and the Holiday Inn is at 68%. The latter site was previously used to quarantine people infected with coronavirus, thus making it slower to fill up, according to a county spokesperson.

The pandemic created a new sense of urgency and funding to rehouse those most at risk and drew attention to the already precarious condition of homeless people’s health.

Being placed in clean, safe housing, with three meals a day delivered to their door, has made an immediate difference for some of the formerly homeless clients who are now Project Homekey clients, Ahlstrom says.

“I can’t tell you how many people I’ve had come to me and say: I feel better than I’ve felt in a year or two years,” she says. “That ability to just lay down and let your body rest is huge.”

A place to rest

Jerome Kincaid, 54, a fellow resident of Ms. Beverly’s at the hotel-turned-housing site owned by the city, uses a walker to steady himself, dragging his leg with visible discomfort with every step. The walker and the slow, painful progression of his steps betray Kincaid’s otherwise youthful appearance—his smooth face, his tall and lean frame.

Kincaid sustained the leg injury while incarcerated at Ironwood State Prison in Blythe, near the Arizona border. Since then, manual labor with a moving company and, later, the restrictive sleeping space in the cabin of his truck, have made the pain worse. To walk normally and possibly work again, Kincaid said, he’ll need a hip replacement.

After bouncing around a series of halfway houses in Los Angeles and Long Beach for several years since his release from prison, Kincaid got into an argument with a fellow resident at a transitional home in Los Angeles and left in June to live in his Dodge Ram pickup. 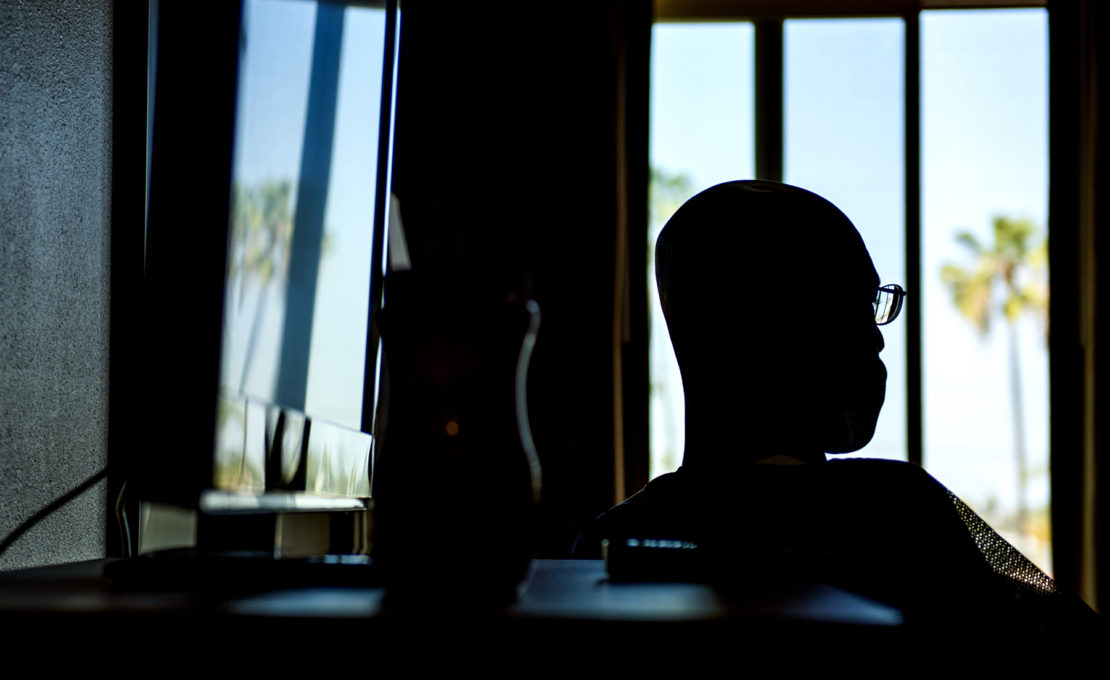 Jerome Kincaid is silhouetted against the only window in his room. Monday, April 5, 2021. Photo by Thomas R. Cordova.

In July, he reached out to the Long Beach Multi-Service Center, which he had heard of years before, while living in transitional housing.

Located in West Long Beach, the center for more than two decades has served as a first point of contact for people experiencing homelessness, helping them access housing, medical care and social services.

At first, Kincaid said the paperwork and sitting around waiting for his application to be processed—it all seemed overwhelming. But after two months of using the center’s facilities to shower and driving others there to access services, Kincaid began the application process himself.

It took several months for him to be moved into housing because he didn’t want to stay at a congregate shelter. A group of men, cooped up in a small space “can become volatile real quick,” he explains.

Just weeks after moving into the hotel, Kincaid says, the pain in his leg and hip has already eased. “I’m able to stretch out and take a hot shower,” he says. “The water relaxes the muscle and I can just lay on the bed and say: I don’t have to move anywhere today.”

And it’s not just his physical wellbeing that has benefitted from being indoors, Kincaid says. When Kincaid speaks to his children or his brother over the phone, he says they can hear the changes. “My family feels that energy coming from me: you’re more at ease now,” he says. “I said: Yeah, I can think!”

Once his damaged hip has been replaced, Kincaid hopes to work again, buy a home, maybe get married again one day. He wants to work as a social worker, to help people, a tradition he says was passed down from his grandmother, who worked as a nurse at the LAC+USC Medical Center near Downtown Los Angeles.

A place to call home

According to the city’s homeless counts, the number of people living on Long Beach streets increased from 771 to 1,031 between 2015 and 2020. The city did not conduct the January count this year, so it’s unclear how that number may have changed during the pandemic.

The most common reason those interviewed during last year’s count gave for being homeless was insufficient income, followed by family problems and job loss.

For Beverly Sesson, all three came together to conjure up a perfect storm that led to her homelessness in January.

After running her own licensed daycare at her North Long Beach home for nearly 15 years, Sesson was left with a bad back and pain in her legs and knees. Caring for more than 20 kids every day became impossible, she says. Even when the children were gone for the day, she couldn’t find rest.

“Because I lived there—it never ended,” she remembers. “The work never ended.”

Eventually, it had to. In 2013, Sesson closed down the daycare center. After that, paying the mortgage on her home became increasingly difficult. For years, she held on, sustaining herself by renting rooms and working as a caretaker on the side.

But it wasn’t enough. In 2019, Sesson lost her home. She briefly moved in with her sister, but the two couldn’t get along. After renting a room from a woman she met at the thrift store, with whom she lived for the majority of 2020, she decided she couldn’t stay there either—too many visitors, too much chaos. So she moved into her car.

Trying to stay warm through the cold winter nights in her car, using public restrooms to stay clean, the experience still leaves her shaken.

“It was horrible,” Sesson says. “When you leave a place and get ready to go home, your home is wherever you decide to park.” She asked for help from some friends, but hid her situation from most, she says. “I was ashamed.”

At the end of January, Sesson came to the Long Beach Multi-Service Center for help. In February, she received a voucher from the city that allowed her to stay at the Coast Motel on Pacific Coast Highway until she was able to move into the newly-opened Project Homekey site in mid-March.

Since then, she has made the room—furnished with a queen-sized bed, a table with two chairs, a TV set and a small fridge—her own.

Planters in different sizes sit atop every surface, the entryway is adorned with wall decorations she found on a trip to the thrift store, a journey she makes sure to find time for every week. She even decorated the hotel lobby with lilies, just in time for Easter last month.

Long Beach Mayor Robert Garcia says the city’s three Homekey sites represent an important step forward in the fight against homelessness. Funds permitting, he says, he’d like to see more of them.

“It’s been one of the best things that the state, in partnership with our county partners and the city, has done,” Garcia says.

If approved as proposed, the state budget for the upcoming fiscal year would provide an additional $750 million to support the creation of more Homekey sites. “We would love to do more and we’re currently looking at funding,” the mayor said.

Los Angeles County is planning to turn its two Long Beach Homekey sites into permanent housing by the end of 2022, and the city is currently exploring options to do the same in the upcoming years.

Once turned into permanent housing, residents would pay a portion of the rent and cook their own meals inside the units, while still receiving some supportive services onsite.

“With Project Homekey, the County has seized an opportunity to meet both the immediate and long-term needs of the most vulnerable members of our community, the vast majority of whom are medically vulnerable and desperately in need of the safety offered by non-congregate shelter in the midst of the pandemic,” Homeless Initiative Interim Director Cheri Todoroff said in an email.

The conversion of these sites into permanent supportive housing in 2022 will provide stable housing for hundreds of people, Todoroff said, adding that she was grateful for the support and resources provided by state and federal sources.

Securing funding for remodeling and continued services at the former Best Western will be a key step in this process, says Long Beach Homeless Services Officer Paul Duncan.

“It should be pretty quick and cost-effective, the transition, but it’ll still be a good chunk of money,” he said. “Our goal is still to work toward permanent housing outside of this site in the meantime.” Residents who are still at the hotel-turned-Homekey site by the time units are remodeled would take priority for permanent placement onsite, Duncan noted.

Beverly Sesson said she would like to stay, if possible. “I feel comfortable here,” she says. “I really don’t like the thought of leaving.”