Violent crime spiked dramatically in Long Beach at the beginning of the year, according to the latest numbers released by police, and authorities say the pandemic is at least partially to blame.

Violent crime across the city rose by 32% in January compared to January 2020, according to a memo from police released last week. And the surge is even more pronounced in some areas of the city.

The police department’s North Division, which patrols most of North Long Beach, recorded a 74% increase in violent crime for January compared to last year. The West Division, which encompasses most of West Long Beach and parts of Central and North, saw close to a 48% increase, the second-highest increase among patrol divisions.

In a three-page memo released Wednesday, LBPD Chief Robert Luna wrote that his department believes the “possible cause” for these crime increases is related to the pandemic’s impacts on the criminal justice system and the community.

Specifically, he wrote that causes include prisons and jails releasing large numbers of inmates to reduce the risk of COVID-19 exposure, more repeat offenders being released on bail, trials and other court proceedings experiencing significant delays, and a “record number of gun sales in 2020,” meaning “there are more guns on the street.”

Other factors, too, could be influencing crime trends, but police said these ones “could not be ignored.”

“These increases are unprecedented,” LBPD spokesperson Arantxa Chavarria said in an email.

Shootings, specifically, have gone up too. Long Beach police responded to 57 shootings in January, 24 of which involved a person being injured or killed, according to police data obtained by the Post through a public records request. 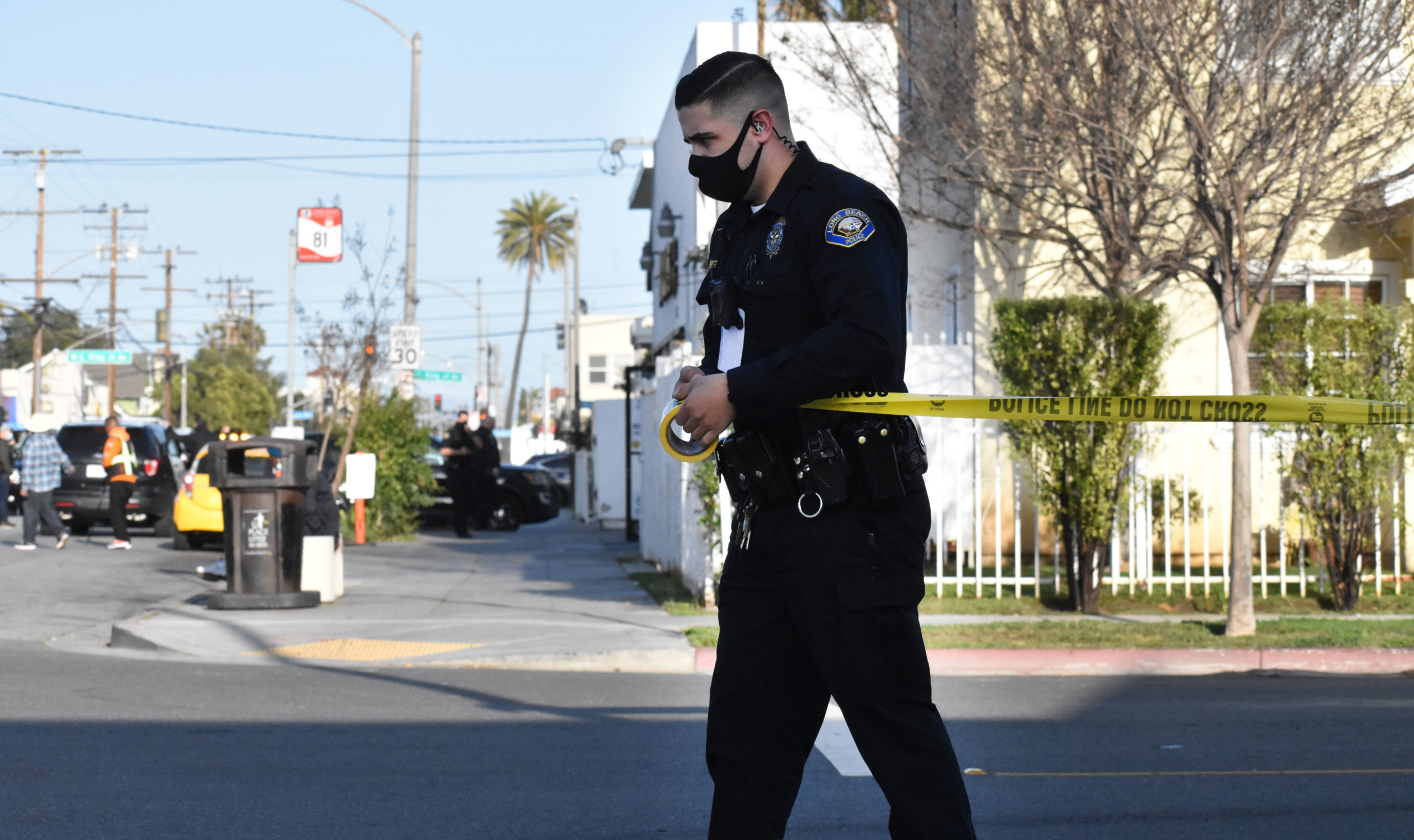 An LBPD officer tapes off a shooting scene in Central Long Beach on Saturday, March 20, 2021. Photo by Sebastian Echeverry.

The Long Beach Police Department prepared Wednesday’s memo in response to a City Council request asking them to explain the uptick in crime over the past year. Police also outlined what they’re doing to try to fight the increases.

In response to the recent shootings, police in February reassigned employees away from their primary assignments to create a Coordinated Response Team (CRT), which is a temporary team made up of detectives, patrol officers, a divisional crime analyst, a public information officer, and a forensic science specialist who meet daily to discuss strategies for reducing violent crime with a focus on gun violence, prohibited possessors, “ghost guns” (homemade untraceable firearms) and the identification of drivers that are contributing to the increase in violent crime, Luna wrote.

Since implementing the CRT, Luna wrote in the memo, police arrested nine prohibited firearm possessors and recovered 13 firearms, two of which were ghost guns. Shootings also declined from 57 in January to 34 in February, although that total was still significantly higher than the 19 in February 2020.

District 1 Councilwoman Mary Zendejas, who oversees parts of West, Downtown and Central Long Beach said she asked for the memo because she wanted answers about and solutions for the increase in violent crime in her area.

Luna wrote in the report that he believes other contributing factors to crime during the pandemic include school closures and lack of programming.

“… I would love to see us address this particular gap as well as other inequities and quality-of-life concerns as a way to keep the 1st District safe,” Zendejas said in an email. She is already seeing crimes prevention pilot programs, Neighborhood Walks, and the yet-to-launch Long Beach Activating Safe Communities, implemented in her district.

“I hope that the sooner we can get programs in place, the better,” he said, adding that the city already has a variety of supportive programming in place from the Long Beach Recovery Act and the Framework for Reconciliation.

Amid the crime increase, he also expects improvements when people return to school and work and get the city’s economy going.

“There’s a lot of tension in our community right now,” he said.