Sunday is National Straw Hat Day and chances are great that you couldn’t care less. Just like you don’t care that today is National Crouton Day or that Monday is National Sea Monkey Day. Every day is a National Something Day and you’re not going to arrange your life around the whims of some special interest group’s goofy or gimmicky proclamation.

One hundred years ago, however, Straw Hat Day wasn’t a day meant to suggest that you might want to buy a straw hat; it demanded it and, bigod, men shelved or trashed their felt hats and bought new, lighter and breezier straw models to get them through the summer months until Sept. 15, National Felt Hat Day, when men, en masse, once again swapped lids for something to get them through the fall and winter.

Advertisements from the town’s many hatters and sellers of men’s furnishings filled the local newspapers, which in turn obliging promoted the day. A headline in the Sun on Straw Hat Day declared “Winter Hats’ Doom Sounds,” and carried the mayor’s proclamation: “you are commanded to ditch the old hat and do your part to uphold the tradition of mankind.”

An newspaper advertisement in the 1920s.

Lorne Middough, then president of the Long Beach Clothiers’, Furnishers’ & Hatters Association and co-owner of the Middoughs’ Boys’ and Men’s and Boy’s Shops on Broadway and Locust, announced, “This is the day for regular ‘he men’ to discard the worn out felts and appear on the streets in a straw of the latest design.”

It was more than a day of sartorial swappage. Bands and residents took to the streets in parades and celebration. In 1924, aviator Earl Daugherty flew over the city dropping dozens of coupons that could be brought to various shops to redeem for a free straw hat.

In 1921 clothiers and hatters closed shop at 1:45 p.m. and joined a parade led by the Silver Spray orchestra that wound around Downtown’s thoroughfares, and a local columnist wrote that Straw Hat Day “is the occasion when every American citizen (male) who prides himself on his fashion smartness will forswear his felt hat, derby or cap and blossom forth in a headgear of grass or straw.”

And another news story in 1921 declared that after Straw Hat Day, “any male who walks the streets displaying a winter hat will do so at his peril.”

And vice versa. Every bit as mandatory was Felt Hat Day, when it was semi-acceptable to knock a straw hat off a man’s head when he wore one a day or two too long into felt season.

In fashionable New York City, some rowdy youths decided to take a jump on the tradition and took to the streets two days before Felt Hat Day in 1922 to go on a campaign of snatching and stomping on straw hats worn by factory workers in the Mulberry Bend area of Manhattan. Factory workers were one thing, but when the youths moved closer to the water and de-hatted dock workers, brawling commenced and soon spilled into the streets, blocking traffic on the Manhattan Bridge, starting what would be called The Straw Hat Riot.

Although police were brought in to settle things down, the fighting continued the next day and into the night, with roving gangs of youth wielding large sticks, some with nails driven through them, continuing their hat-snatching, along with beatings, resulting in many men being hospitalized and youths arrested. 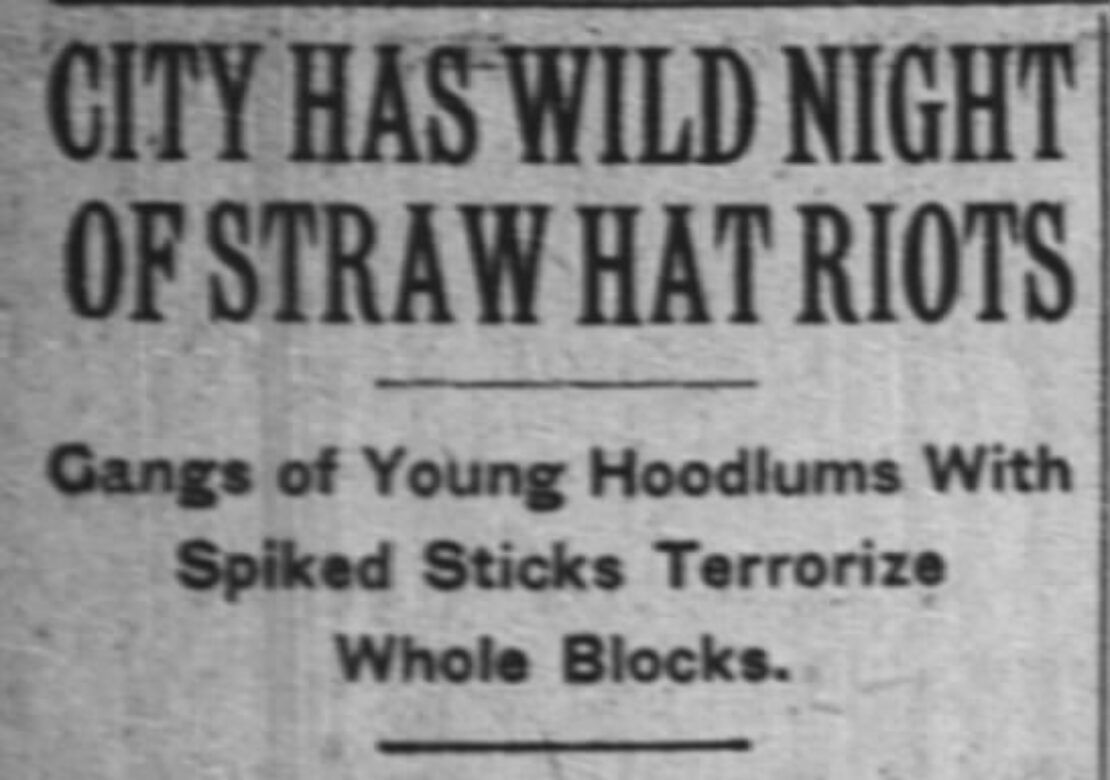 That was the last and most vociferous uprising over hats that New York would see, though the tradition of knocking off hats continued, if a bit abated. Though in 1924, a man was murdered in New York for wearing a straw hat past the deadline.

The following year, in 1925, a rather humorous essay in the New York Times Magazine, perhaps hyperbolically, chastised the sort of man who continued to wear the wrong hat according to the season: “He may even be a Bolshevik, a communal enemy, a potential subverter of the social order. He is a backslider, a drone, careless of custom, a mocker of the herd gods—for whether in malice or through sloth, he has defied them.”

Back in Long Beach, where nothing like a riot never occurred, the transition from straw to felt on National Felt Hat Day, was conducted with spectacle rather than violence.

Even as the wearing of hats, especially the jaunty straw ones, was dwindling in the late 1930s, the tradition lingered on. In 1939, the straw hat season ended with a publicity stunt promoted by the Long Beach Junior Chamber of Commerce and on Sept. 15, with bands playing, crowds cheering and newsreel companies’ cameras rolling, a mountain of straw hats collected by the chamber, were piled in the street and, as the press reported, “a steam roller, piloted by a crew of Long Beach’s fairest damsels, ran over a six-foot pile of hats, thereby officially ending the straw hat season.”