It was a pretty big deal when the Ford Motor Co. opened a mammoth assembly plant in the Long Beach harbor along the Cerritos Channel, opposite Terminal Island, on April 21, 1930. It was a giant leap in the city’s efforts to become an industrial power along with its seaside charm as a tourist destination.

The city celebrated with a luncheon and invited pretty much everyone of any note in Long Beach and surrounding cities at the Pacific Coast Club followed by a tour of the plant.

The local press fell all over itself in forecasting how the acquisition would change everything.

The Long Beach Sun held its enthusiasm a bit at bay with its front-page story that stated, “Long Beach today will play a stellar role in one of the biggest industrial dramas of its history—the official opening of the $5,000,000 Ford plant on Cerritos Channel.”

The Sun’s rival, the Press-Telegram (which would eventually acquire the Sun), sort of fell apart with an explosion of Swiftian references:

“A mammoth power giant, shackled, obedient to the touch of man, but registering its tremendous force in every slow, undulating movement of its Brobdingnagian body, has been born in Long Beach…Its attendants are goggled, sweating pygmies; Lilliputian servants of their pinned Goliath, yet controlling it by the triumph of intelligence over matter.” 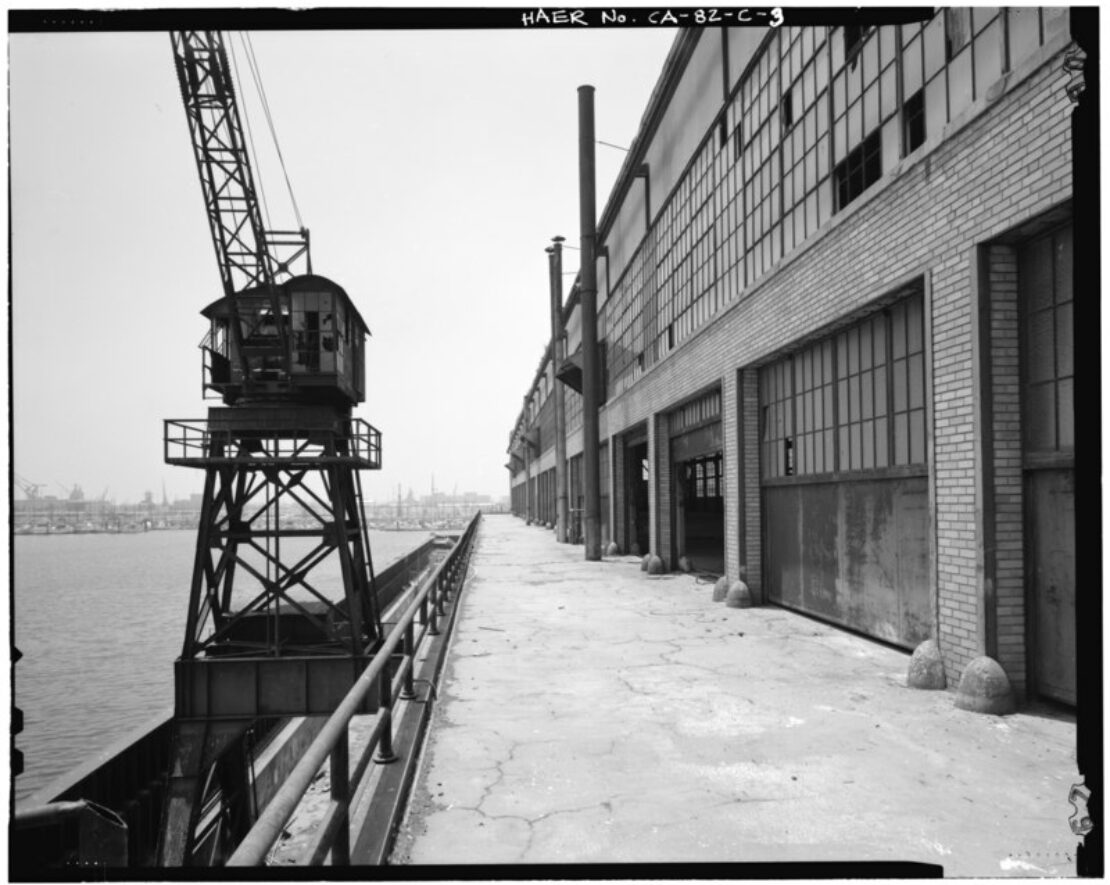 A crane from the second-floor deck of the Ford Assembly Plant in Long Beach Harbor. Wikipedia photo.

Ford built the Long Beach Assembly Plant to expand the production of its Model A, which replaced the Model T in 1927. The first car to roll off the new assembly line, a four-door sedan with a list price of $768.50, was given to the city.

Nearly 2,000 people were employed, working around the clock, turning out 400 cars a day, with workers earning a minimum of $7 a day.

The plant had frequent stoppages over the earlier years, starting with a closure in December 1932 when it became difficult to get parts for manufacturing, and then it was closed for several months due to damage from the March 10, 1933 earthquake. It fired up again in late 1934 but closed again during World War II when the government needed the plant for an Army supply depot.

By 1950 the plant was enlarged and booming once again, turning out 72,316 vehicles that year, its peak. Between its reopening after World War II through 1952, the plant had built more than 325,000 vehicles.

The plant faced other obstacles and weathered them all—fires, an explosion, labor strikes—but eventually, Ford decided it no longer required its services and in 1958, its last car, a 1959 Fairlane, rolled off the line.

The sprawling building limped along filling other capacities, mostly as a warehouse, before it was finally razed, with a lot less fanfare and unfettered press hyperbole, in 1990.