For 30 years, the Long Beach Municipal Auditorium ably served the city’s convention and entertainment needs. Each year, it hosted all manner of conventions, graduations and concerts, including many memorable ones, such as the opening night of 26-year-old Liberace’s first world tour in February 1947, and a star-spangled 1955 concert by Judy Garland, which was attended by Frank Sinatra, Dean Martin, Sammy Davis Jr., Humphrey Bogart, Betty Grable, Lana Turner and Jimmy Stewart. And, of course, rock and roll, with performances by the Rolling Stones, Bob Dylan and Elvis Presley, among others.

But Long Beach was growing as the city headed into the 1950s and ‘60s, as was the convention business and Long Beach Convention Bureau manager David Olmsted wanted more room to keep pace with other cities that were grabbing conventions and their guests who filled hotels and restaurants. In fact, Olmsted had wanted more space since 1940, but by 1952, he had grown more adamant, complaining to the city that they were losing business at a rapid clip and needed to build an annex to the 1932 Municipal Auditorium to allow for more exhibit space and larger crowds.

It was easier said than done. For a decade, the annex plan was beset by red tape involving the use of Tideland funds, which had been diminished by a lawsuit that gave the state of California half of Long Beach’s oil money. The estimated cost of the so-called Auditorium Annex was estimated to be $2.75 million. A public vote gave the go-ahead to spend that and voters also OK’d the annex in two subsequent elections when the price increased first to $3.4 million and, in 1960, when the estimated cost was $6 million. It would eventually cost $8 million to build. 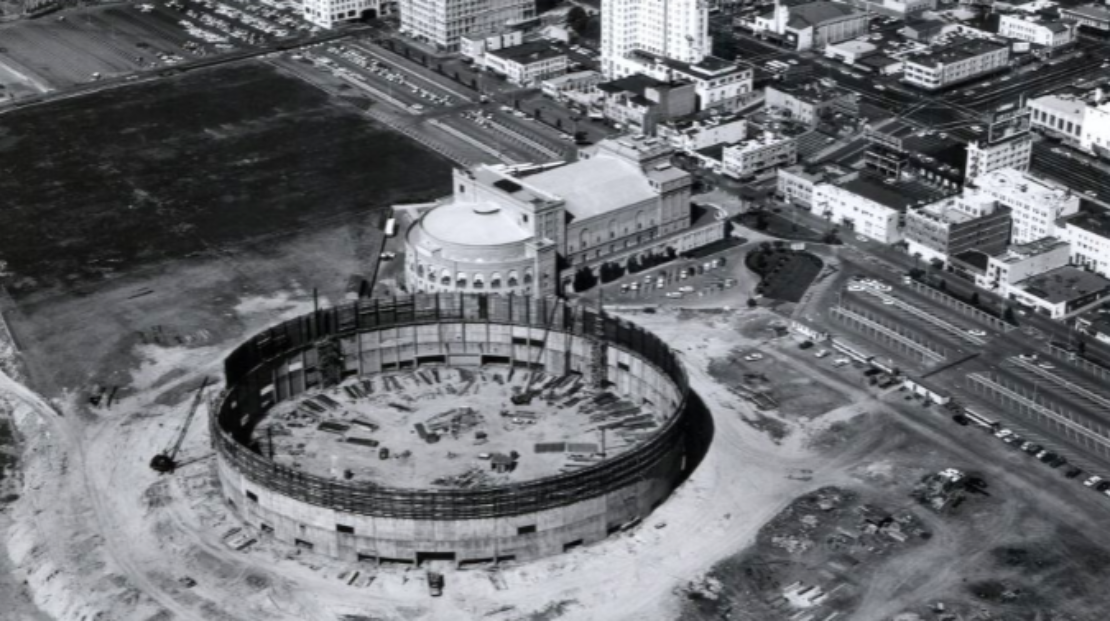 The city managed to scrape the money together and hired architect Kenneth Wing to design the building on the landfill that replaced the lagoon inside the arc of the Rainbow Pier. Wing insisted on the annex’s elliptical shape, which would be broken up by a dozen glass-enclosed staircases leading to the loge and balcony sections. Critics complained that it didn’t fit in well with the design of the ornate Municipal Auditorium—but that matter would be dealt with soon enough.

It wasn’t until 1961, when construction was underway, that the city gave the annex a proper, if uninspired, name: the Long Beach Arena.

The Arena opened in October 1962 with a three-day performance by the Ringling Bros. Circus, followed by what would be some longtime staples at the venue: the Ice Capades (and later Disney on Ice) and the Harlem Globetrotters as well as a host of sporting events, including the inaugural (and final) season of the professional basketball team, the Long Beach Chiefs of the American Basketball Conference and an exhibition game featuring the expansion NHL team the L.A. Kings, who would continue to play at the Arena until their home at the Forum was finished. 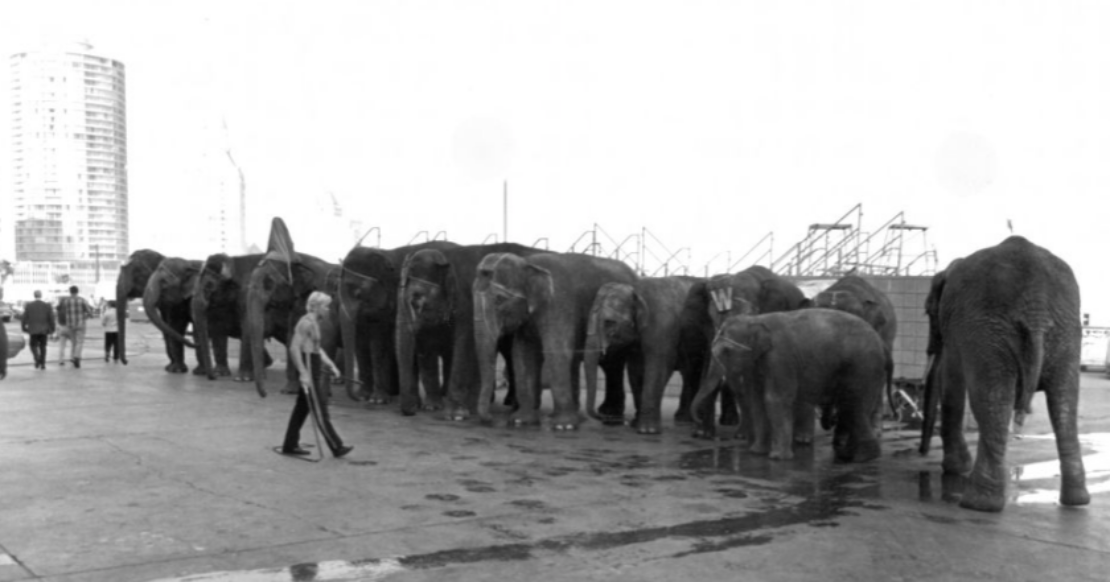 The Arena’s first trade show was Home-O-Rama and the venue already was filling its schedule with bookings demonstrating the vast variety of uses it could provide: the 1964 National Square Dance Convention, which would bring 10,000 square dancers to town; the 1963 Pacific Southwest Hardware Association trade show; the U.S. Figure Skating Competition for 1963; the Eastern Star Convention; and the California Dry Cleaners Association convention.

Into the 1970s and ‘80s, every rock band imaginable (except the Beatles) played the Arena. The list is close to endless.

The building’s exterior was originally painted with alternating tan and white vertical stripes and it remained that way until 1992, when the artist Wyland painted his Whaling Wall mural around the building, touching it up and adding a mural of the Earth to its roof in 2009. The Whaling Wall would later add much confusion among tourists who continue to mistake the Arena for the Aquarium of the Pacific. 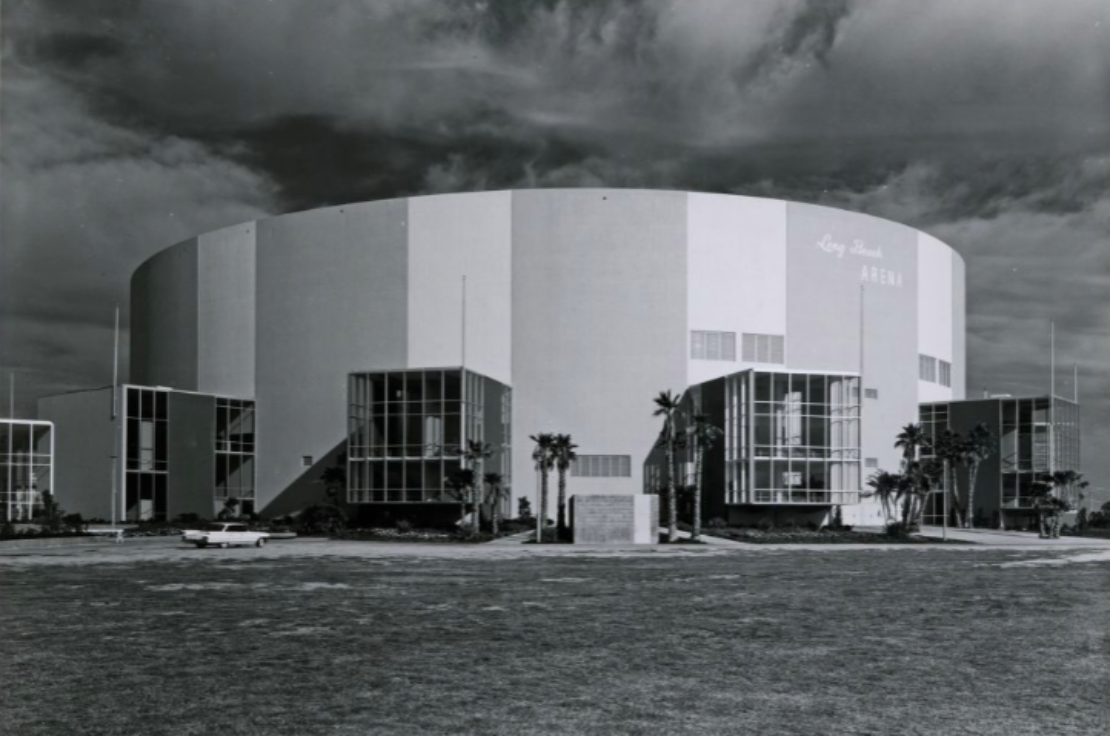 The grand Municipal Auditorium was demolished in 1975, perhaps topping the list of glorious buildings the city has destroyed, but it was necessary to remain competitive in the convention and entertainment business. Its destruction made room for the Long Beach Convention and Entertainment Center, which included the Terrace Theater, the Center (now Beverly O’Neill) Theater and the new and spacious Convention Center.

Local history: The rise and fall of the Naples Hotel