Long Beach was ripe for a municipal market—we call them farmers markets today—in 1913. Much of the area outside the busy boundaries of Downtown was largely agricultural, with cattle being raised on the west side, sheep still grazed up north, large tracts of citrus groves grew on the slopes of Signal Hill, and sugar beets were farmed in the undeveloped east. Everywhere were fields of one sort or another, small truck farms producing flowers, vegetables and nuts. People raised chickens and rabbits.

While it was true that a visit to one of the many grocery stores and specialty shops in the rapidly growing city were offering these goods for sale, there was a certain allure, and there still is, offered by the open-air market with farmers and craftspeople selling their goods directly from their land or workshops.

The Woman’s City Club of Long Beach came up with the plan and worked hard with other groups, including the Ebell Club, the Chamber of Commerce, the Realty board and others, presenting the market as having something of a European vibe that shoppers would find cosmopolitan and appealing.

If the Woman’s City Club got the market going, Squire DuRee got the market skyrocketing to success. DuRee was the market’s first manager and there was no better man for the job. He was a tireless promoter of the city and as such kept a well-stocked hat rack of responsibilities, first as a grocer, then a theater owner-operator. He was the powerful Pike Association president, arranged to have Calbraith Rodgers conclude his historic cross-country plane journey in Long Beach and would later become director of the Long Beach Recreation Department. And, notably, he sired a long line of Long Beach Fire Department brass: his son, Allen was chief for 12 years; his grandson Stanley was a captain; his great-grandson Rick was deputy chief and his great-great grandson, Mike DuRee was chief.

As market manager, Squire presided over a grand opening on March 23, 1913, as thousands of people showed up to shop along the stretch of Pacific Avenue from Ocean to Broadway alongside Pacific Park (now Lincoln). The Municipal Band played as it did on virtually every occasion in the city in those days, and DuRee, dressed in a uniform he designed of gray- and black-striped pants, a light gray jacket and a cap bearing his title on the front, strode along the stretch maintaining order over the 30 wagons that had backed up to canvas stalls where merchants were selling their various offerings. These included, according to a report in the Los Angeles edition of the American Guide series, “Green-tinted duck eggs, chickens and ducks roasted a rich brown and ready to serve are sold by the Chinese. Italian fishwives offer filets of yellowtail, sea bass and barracuda dressed with olive oil and cured in the sun before smoking.” 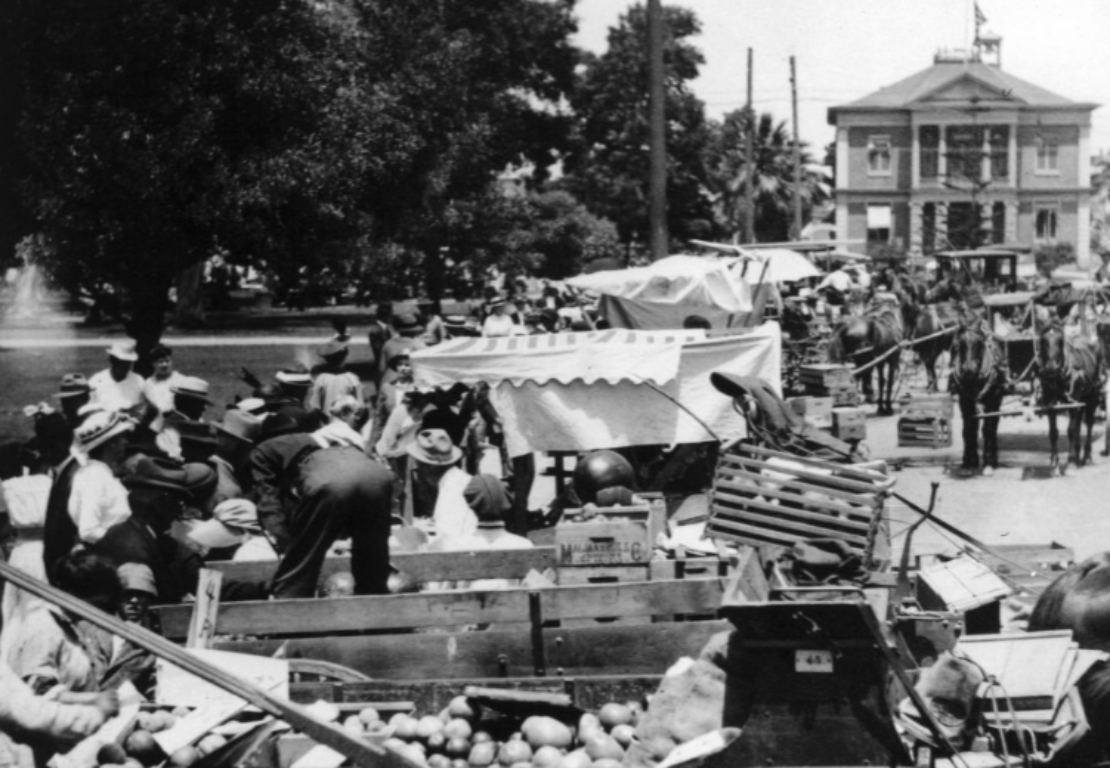 The market, open at first just two days a week before growing to three, grew steadily, often seeing 10,000 shoppers per short week. It began taking up more parkside real estate as well, turning left on Broadway and shortly after that, hanging a left on Cedar, nearly surrounding Pacific Park.

Market Master DuRee conducted a study of the mart’s vendors and their offerings in 1922. At that time, according to his report, 112 stalls employed 162 people (98 men, 64 women).

DuRee reported on the diversity of the market workers, noting that 46 were Americans, 32 Japanese, four German, two Welsh and one each of French, Italian, Swiss, Norwegian, Armenian, Spanish, Scots, Canadian and Chinese.

The Municipal Market soldiered on in the face of increasing and encroaching progress in the 1950s and ‘60s.

The Long Beach civic center, then in Lincoln Park (this was a couple of civic centers ago, before the now-demolished 1976 version was built), was booming and much of the park was dug up to build underground parking, which forced the Municipal Market to scootch over to Chestnut Avenue, between Ocean and Third Street by the pre-Deukmejian Courthouse.

In that location, judges and attorneys squawked about parking problems on market days, so the market, dwindling in popularity, moved up to Cedar Avenue where by then it had shrunk to a small 14-stall collection of produce. The last straw came in 1973 when the Municipal Market was finally closed to make room for the 1976 City Hall and Library complex.