Glen L. Clark blew into town at the age of 30 in 1920 after packing up his assortment of minor-league vices and leaving his business in Excelsior Springs, Missouri, to reboot his life in Long Beach, a city he had visited once with his wife Mary Lou. He had become enamored of its climate and its prospect as a place to bring his business of peddling items that people have always hankered for: cigars, cigarettes and other tobacco, as well as confections, coffee and various drug sundries and elixirs.

The business had been successful in Missouri, enough for him to spin off a second wholesale business there, so he arrived in Long Beach with a handsome bankroll and immediately purchased a building at First Street and Linden Avenue where he established his business, the Glen L. Clark Company, where he sold his goods, which also included the flavor extracts he produced along with spices that he ground and coffee that he roasted.

Business boomed for Clark, and on Nov. 4, 1928, he presided over the opening of his Broadlind Hotel—named for its location at the southwest corner of Broadway and Linden Avenue in the neighborhood now known as the East Village.

The $85,000 Broadlind Hotel was designed by the architects George W. Kahrs and Natt Piper, whose offices were on the floor above Clark’s wholesale stand on Linden. The hotel originally consisted of 33 rooms on two floors above the lobby and mezzanine.

The architectural style is a blend of Italian Renaissance and American Midwest style—mostly the former, with its arches, stone columns and braided concrete ornamentation. 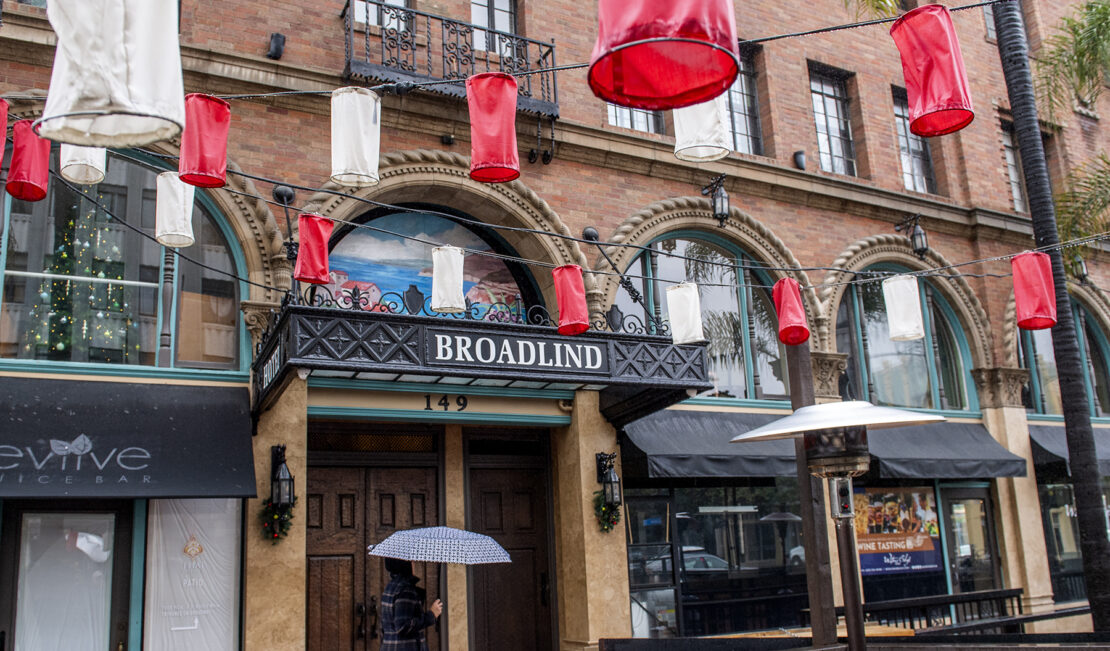 The Broadlind Hotel, designed in the style of Italian Renaissance, in Long Beach Wednesday, Jan. 4, 2023. Photo by Thomas R. Cordova.

It was designed as “exclusive bachelor apartments” for men. The rooms were built “with rugged masculine character in the decorations and fixtures,” including mahogany entry doors and wood-trimmed niches and wrought iron reading and piano lamps.

Not proudly advertised was another of Clark’s nods to vices: a basement speakeasy and bar hidden in the basement for those desiring a break from the restrictions of Prohibition. When liquor was once again permitted with Prohibition’s repeal in 1933, Clark became a distributor for Coors, adding another popular item to his roster of offerings.

Clark and his wife lived in the Broadlind Hotel until his death in 1964 at the age of 74. He had been a successful Long Beacher, serving as a harbor commissioner from 1935 until 1939 and he was a charter member of both the Long Beach Yacht Club and Virginia Country Club. He sold his business in 1948.

The Broadlind, meanwhile, went through several changes. During World War II it was used for housing by Navy officers. For a while it became a combination hotel and apartment complex and in later years, when the East Village had fallen into a rather seedy part of Downtown 1980s, it stood vacant. It was purchased in 2005 and was redecorated, no longer in a severely masculine manner, and now exists as a boutique hotel made up of 20 rooms ranging from studios to two-bedroom suites and a penthouse.

The Broadlind Hotel, along with its nearby neighbors the Lafayette complex and the Cooper Arms condominiums, is a Long Beach Historic Landmark.

Local history: The world came to Long Beach with the 1928 Pacific Southwest Exposition