Prosecutors say a Long Beach-based organizer has been charged with attempted murder, six counts of assault with a deadly weapon and multiple other felonies based on accusations that she pepper sprayed people, waved a wooden baton and then seriously hurt two victims by driving into a crowd of counter-protesters during a rally against racism in Yorba Linda this past weekend.

Authorities allege 40-year-old Tatiana “Tia” Turner ran over the head of one woman and broke the leg of a man when she accelerated her car through the crowd.

Now she faces a maximum sentence of seven years to life plus 13 years and four months in state prison if convicted on all charges, the district attorney’s office wrote. She is scheduled to be arraigned today.

Fellow activists and Turner’s lawyer, Ludlow Creary II, have pushed back on the charges. Creary said Turner feared for her life when she drove through a crowd that had surrounded her car.

Turner had asked police for help from a hostile crowd but was ignored, Creary said. 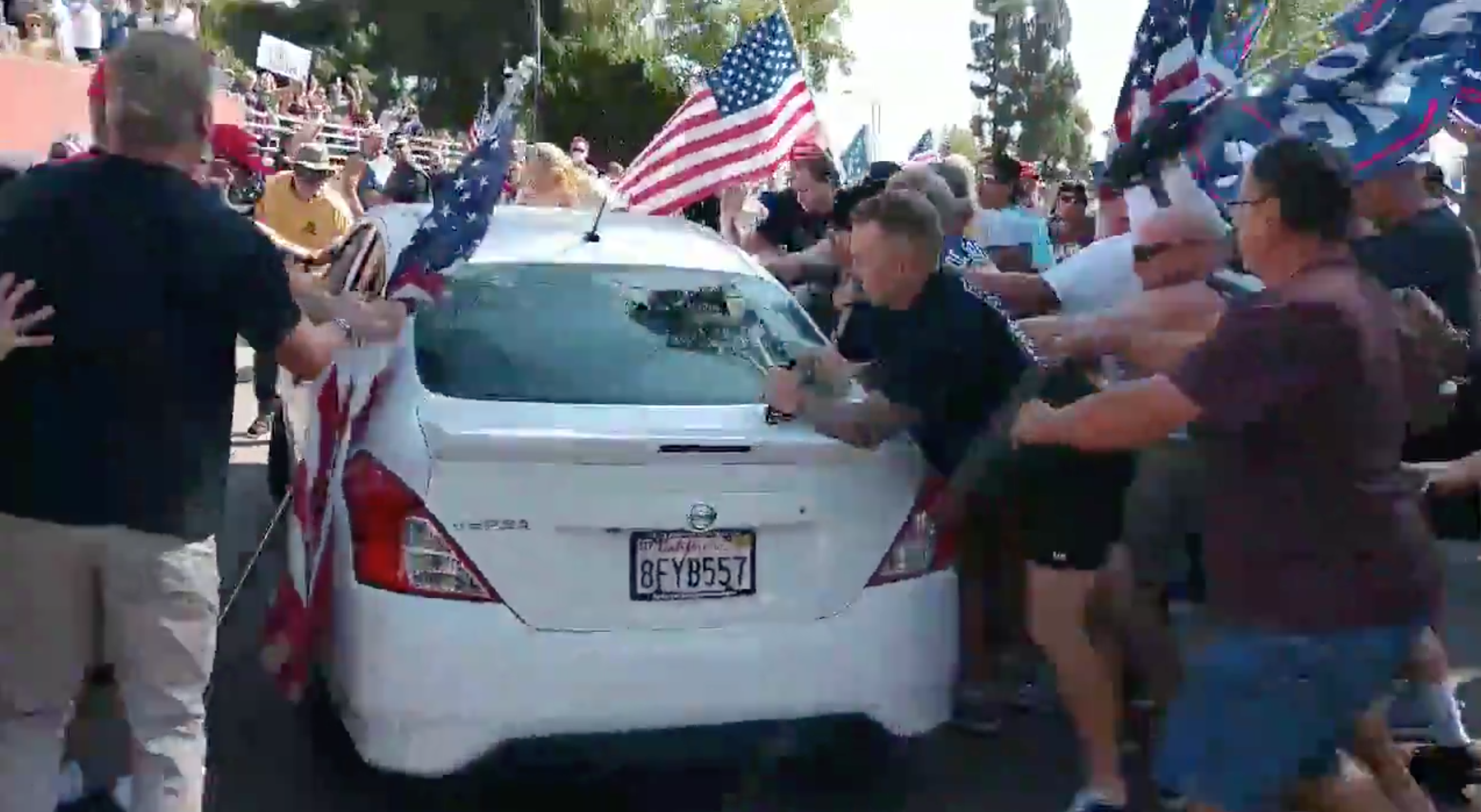 Screenshot of a video posted by Border Photog (@desertborder) on Twitter during protests in Yorba Linda on Saturday, Sept. 26, 2020.

The Orange County Sheriff’s Department, however, said deputies did not think Turner was in danger when she accelerated into the crowd of people.

“It did not appear from the video we’ve been able to see that there was a direct threat,” spokeswoman Carrie Braun said. “I wasn’t there and wasn’t sitting in the vehicle. I don’t want to say what she could, would or should have done. Clearly any time an incident like this occurs it’s tragic for everybody involved.”

Turner, who runs the activist group Caravan 4 Justice, was one of the organizers of the march in Yorba Linda Saturday. In a statement, Orange County prosecutors accused the protesters of showing up prepared for a fight by outfitting themselves with helmets, tactical vests, riot shields and tasers.

Video from the protest against police violence and systemic racism shows it was interrupted by a larger group of counter-protesters supporting President Donald Trump.

The scene was heated. And as Turner was exiting a parking lot, she drove her car through an intersection and struck a man and woman, according to Braun.

Turner has been in custody for the past three days on $1 million bail, according to Orange County jail records.

“We are reviewing all surveillance footage to identify other suspects, regardless of what side of the political aisle they are on,” wrote Orange County District Attorney Todd Spitzer.

Caravan 4 Justice representatives said they plan to hold a press conference Wednesday about what happened. The group has expressed sympathy for those who were injured, but, Anthony Bryson, who helped Turner organize the march, said her charges and the bail amount are ridiculous.

Some observers have drawn comparisons to another case on Thursday when a man driving a pickup truck struck a woman protesting police brutality in Hollywood and was not arrested. Los Angeles police said they were investigating it as a hit-and-run.

Police said it appeared that the driver was surrounded by a crowd of protesters who struck his vehicle with sticks and attempted to open the driver’s door as he passed. He hit a woman protester as he fled and she was hospitalized. The Los Angeles Police Department said she received “minor injuries,” LAist reported.

Jody Armour, a criminal law professor at the University of Southern California, said the different approach taken by law enforcement in the two counties could suggest different treatment for two people who feared for their safety.

“What you have is bookend cases to compare when two alleged perpetrators can each claim some kind of self defense or duress as an excuse for what they did,” Armour said. “It does seem the officers are giving more deference to the claim of the pickup truck driver and less to her.” 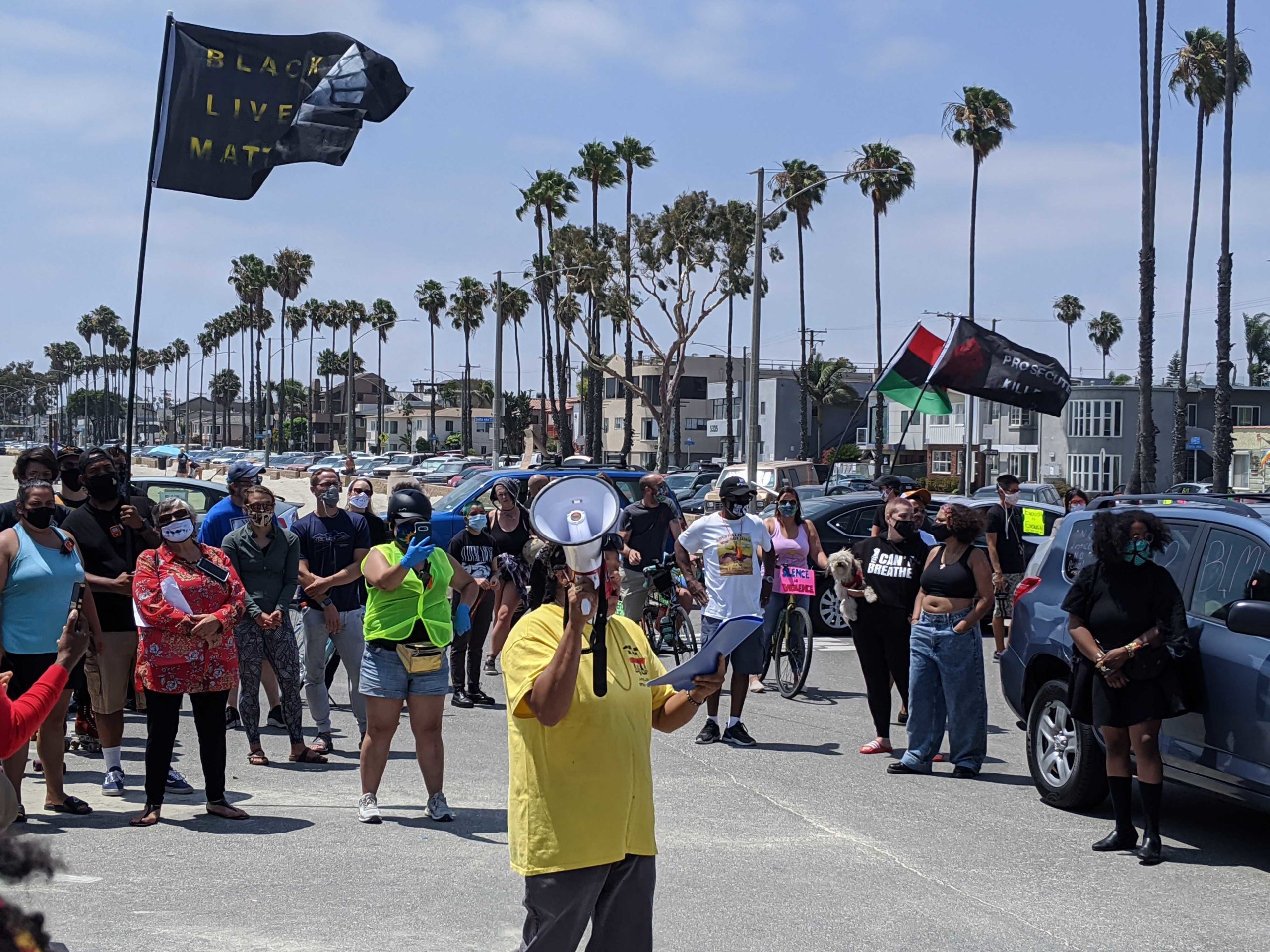 In this file photo, Caravan 4 Justice organizer Tia Turner speaks to protesters before they head out to caravan throughout the city for a Black Lives Matter protest on June 20, 2020. Photo by Valerie Osier.

Additionally, Turner and her colleague launched Urban Organizers Collective, which is a coalition of over 25 local organizations that includes Caravan 4 Justice.

Being a fairly new organization, Caravan 4 Justice has drawn hundreds of people in solidarity with the Black Lives Matter movement in protests in Belmont Shore and Seal Beach.

The full list of charges prosecutors filed against Turner are:

City News Service and Crystal Niebla contributed to this report.