Long Beach is expected to support state legislation that would create food safety regulations for sidewalk vendors, but it will stop short of issuing an outright moratorium on fines for “bad operators.”

The City Council discussed a resolution this week that would direct its legislative advocates in Sacramento to support laws that would make it easier for street vendors to operate in the state. The city is also looking to ask its own health department try to make the permitting process more understandable, and possibly less expensive.

Her bill aims to modernize the California Retail Food Code to address the “complex permit challenges faced by sidewalk food vendors,” the senator’s office said when the bill was introduced.

Some changes to the state’s retail food code that could help street vendors include a streamlined process for food cart compliance, including pre-approved blueprints for carts, and giving local health departments more discretion in the approval process. Changes could also be made to the current requirement that food carts have sinks, power and water.

A process to address non-compliance without issuing fines or criminal penalties could also be developed.

Discussion of a citywide moratorium on issuing fines to street vendors through the end of the COVID-19 pandemic quickly fizzled at Tuesday’s meeting. Council members on Tuesday expressed concerns over potential “bad operator” vendors who have repeatedly made people sick with their products.

Council member Mary Zendejas, who proposed the resolution, said that there should be a carve-out for these problematic businesses.

City Manager Tom Modica said that we would like the city to still have the ability to enforce state health laws where there are real concerns of public health.

“We still have a requirement as a health jurisdiction to enforce state health law,” Modica said. “We do still need to go out and make sure people are safe.”

Cameron Kude, owner of coffee cart pop-up Cafablanca, said that in the past, he’s had authorities threaten to have his cart impounded over regulations that are too strict.

Kude said in order to be permitted, his cart would have to have a three-compartment sink, which he deemed as unnecessary and impractical as he used disposable cups instead of washing dishes.

Kude, who has pressed the council to take action on the issue since August, said that the decision from last night made him feel frustrated because street vendors are waiting to be decriminalized.

“It’s just a little disappointing that it wasn’t thought out,” Kude said about the legislation.

Gonzalez did not respond to a request for comment.

Beyond being criminalized, some street vendors have been victimized in Long Beach, and their unpermitted status has left some conflicted on reporting their attacks. 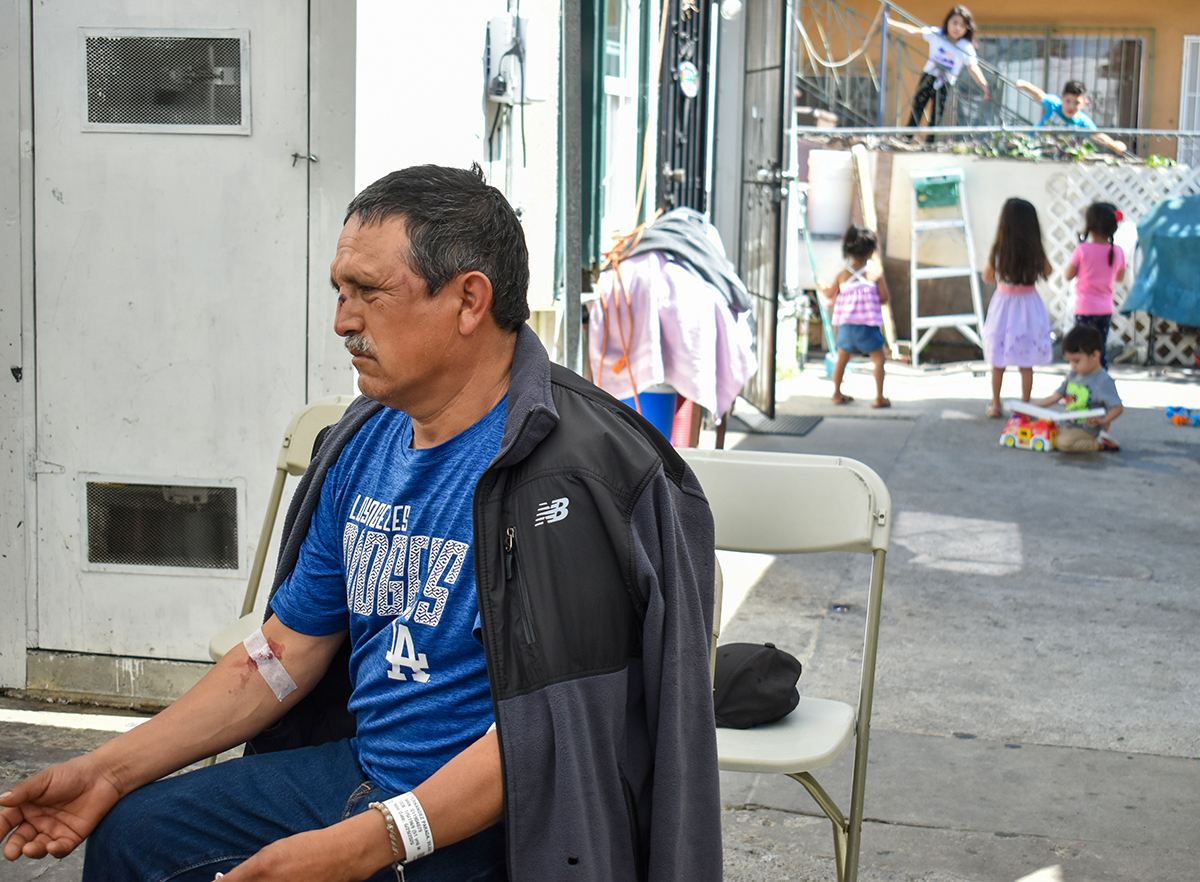 Viliulfo “Bililfo” Fernández sits in the common space outside his home after returning from the Long Beach Memorial Hospital on June 30, 2020. Photo by Crystal Niebla.

In July 2020, elotero Viliulfo “Bililfo” Fernández was punched and pistol-whipped during a robbery where his money and phone were stolen while working in the Washington neighborhood. He made contact with police that day after he was knocked unconscious, but has been reluctant in the past.

When street vendors like himself are robbed of money or products and call for help some have found that police end up giving them tickets.

That happened in a separate incident involving a street vendor being harassed in August. The Long Beach Police Department said the ticket was voided and it was against department policy to issue citations for street vendors lacking permits.

Since the violent robbery, Fernández has returned to selling his corn in the Washington neighborhood, where he lives. Eliminating more obstacles with the senator’s bill, such as receiving permits more easily, could be a step in the right direction to support him and his fellow street vendors.

“Because with a permit, it feels happier, and any day, even a small thing, [a vendor] would call the police,” Fernández said.

A resolution is expected to be drafted and returned to the council for a vote in the future but what the definition of a bad operator might be is yet to be determined.