The Long Beach City Council will revisit a tenant protection ordinance on Tuesday meant to protect renters from intimidation and harassment following claims that landlords have shut off utilities or demanded tenants to use their federal stimulus checks to pay rent over the past several months.

Vice Mayor Dee Andrews placed the item on the Oct. 20 council agenda. If adopted, the item would authorize the City attorney to draft an urgent ordinance to address allegations of landlord harassment.

“Over the years, tenants have reported increasing and significant incidents of harassment throughout the City of Long Beach,” a memo from Andrew’s office stated. “These include, but are not limited to, interruption or termination of housing services, failure to timely perform unit maintenance, abuse of the landlord’s right of access into dwelling units, demands that tenants sign over their federal stimulus checks to pay rent, statements of false information regarding housing policies and protections and service of improper notices to vacate.”

While there are state laws already in place to address landlord harassment, Norberto Lopez, project manager with Long Beach Residents Empowered, said that local city policies would be easier to enforce. Lopez added that, in his experience, local policy usually carries greater impact than statewide policies.

Andrews’ proposal outlined 13 protections, some barring landlords from conducting illegal lockouts, promote timely maintenance to units and to not abuse the right of access to a dwelling.

Councilwoman Mary Zendejas introduced a similar policy in late August. Zendejas’ proposal outlined 30 provisions that would protect tenants from illegal evictions, discrimination based on race among other protections.

However, Zendejas pulled the item from the Sept. 1 agenda before the council could discuss the matter, which dismayed some housing advocates who looked forward to the proposal passing.

Lopez said the tenants he has worked with were in need of those protections.

“We were upset because we needed that policy since May to avoid harassment as government orders were telling people to stay home,” he said. 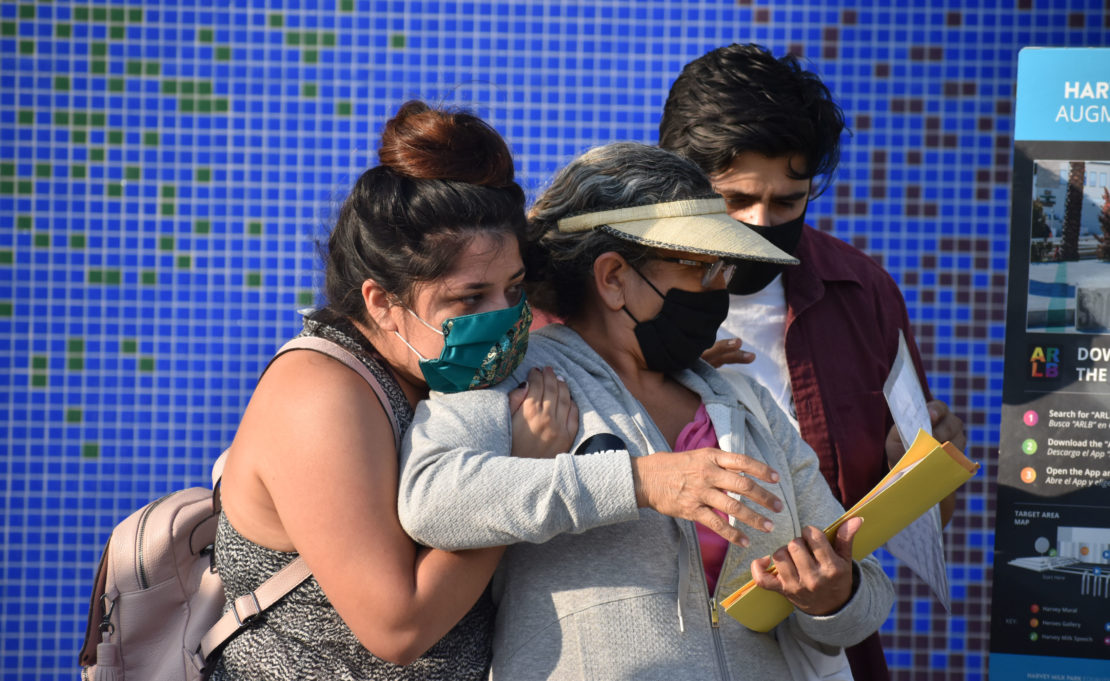 A mother and daughter embrace at a rally denouncing tenant harassment at Harvey Milk Park on Friday, Oct. 9, 2020. Photo by Sebastian Echeverry.

When asked why the original protection proposal was pulled from the meeting, Zendejas’ Chief of Staff Ray Morquecho said the councilwoman pulled the item herself because she felt the timing was off.

“She wanted to be sure it passed when brought forward,” he wrote in an email to the Post.

Lopez has worked with tenants in Central and West Long Beach who allege their landlord has removed security doors and shut the power off in an effort to intimidate the tenants.

Last week, Lopez, other housing advocates and tenants marched through Downtown along Pine Avenue to demand eviction protections and denounce landlord harassment. They also marched to Zendejas’ apartment Downtown to demand intervention from the council.

Mike Murchison, a local lobbyist representing property owners, believes the protections policy is unfair to the vast majority of housing providers in the city.

“While there are some bad apples, 95% are good people who have good relations with their tenants,” Murchison said. “I don’t think it’s a reflection of the majority of the housing providers.”

Murchison said the property owners he’s worked with feel that they’ve been struck with a barrage of policies, yet little protections have been adopted for them, adding that banks should have frozen mortgage payments.

Murchison added that the pandemic has affected everyone, and believes a solution for tenant-landlord tension would be to meet with each other and the council office to reach an agreement.

Andrews’ item was co-sponsored by Councilman Roberto Uranga. It will need five votes on the council to pass.

The City Council will meet virtually on Tuesday, Oct. 20 at 5 p.m. To view the meeting click here.