A facilities-improvement fund at the Long Beach convention center lacked “key internal controls” to safeguard millions of dollars in public money, according to an accounting firm hired by the city to examine the fund after a whistleblower’s allegations of lax oversight and wasteful spending.

In a summary of its findings released last month, the firm said bookkeeping for the fund had deviated so markedly from industry-standard accounting practices that it was “difficult to evaluate” whether money was being spent and tracked properly at the city-owned facility.

The firm of Macias Gini & O’Connell concluded that, for more definitive answers, Long Beach would need to initiate a broader evaluation of fund expenditures and the assets purchased, including hundreds of thousands of dollars in furniture for the convention center.

City officials, however, rejected the expansion, calling it unnecessary and too costly.

Instead, city staff have said they relied on their own observations and representations by the convention center’s private operator to conclude that purchases were appropriate, according to a review of public records and multiple interviews performed by the Long Beach Post.

Officials say controls over the fund have now been tightened.

The city’s decision to limit the scope of the inquiry drew criticism from the whistleblower who sparked the financial review. Paul Falzon, the Long Beach Convention & Entertainment Center’s former finance director, said the move seemed designed to send the message that “there’s nothing to see here.”

Falzon is suing the convention center’s private operator, ASM Global, for wrongful termination, alleging he was pushed out of his job after repeatedly complaining that city rules for the fund were being violated and that unnecessary purchases were being made.

Among other failings, Falzon contended that ASM was complicit in a steady stream of unauthorized purchases orchestrated by Long Beach Convention and Visitors Bureau CEO and President Steve Goodling. 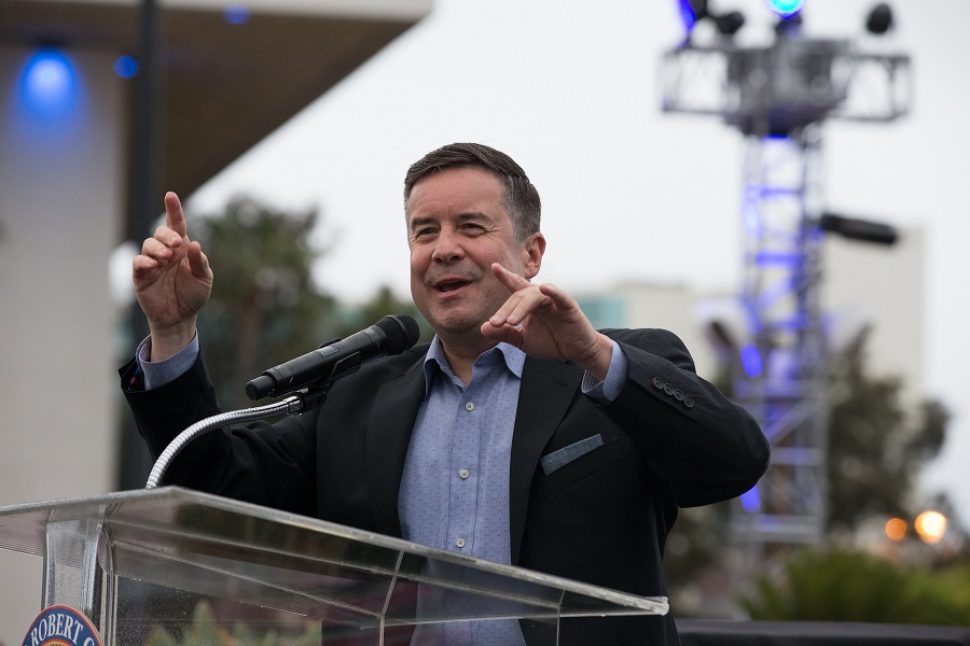 Falzon alleged that Goodling, whose organization partners with the convention center to promote tourism and business travel in Long Beach, was tapping the publicly funded account to buy extravagant furniture, decorations and other trappings that the convention center operator didn’t want or need. Goodling has insisted he operated properly at all times.

The account in question, called the “$5 Parking Fund” because it’s fed by a portion of parking revenues collected at the convention center, has existed for decades, according to city staff, but they have been unable to find records of how it was created and for what purpose.

For at least 20 years, however, Long Beach has allowed the convention center operator to use the fund to pay for maintenance, furnishings, construction and other similar needs at the facility with the understanding that city staff must approve each project in advance.

Falzon said that, during his tenure as finance director, he estimated Goodling spent about $1.3 million in public funds on furniture, lighting fixtures and art. Many of the purchases, such as a set of $3,800 Italian leather chairs and a $500 marble floor lamp, were bought at a consignment store near Goodling’s home, according to over 100 pages of invoices and receipts reviewed by the Long Beach Post. 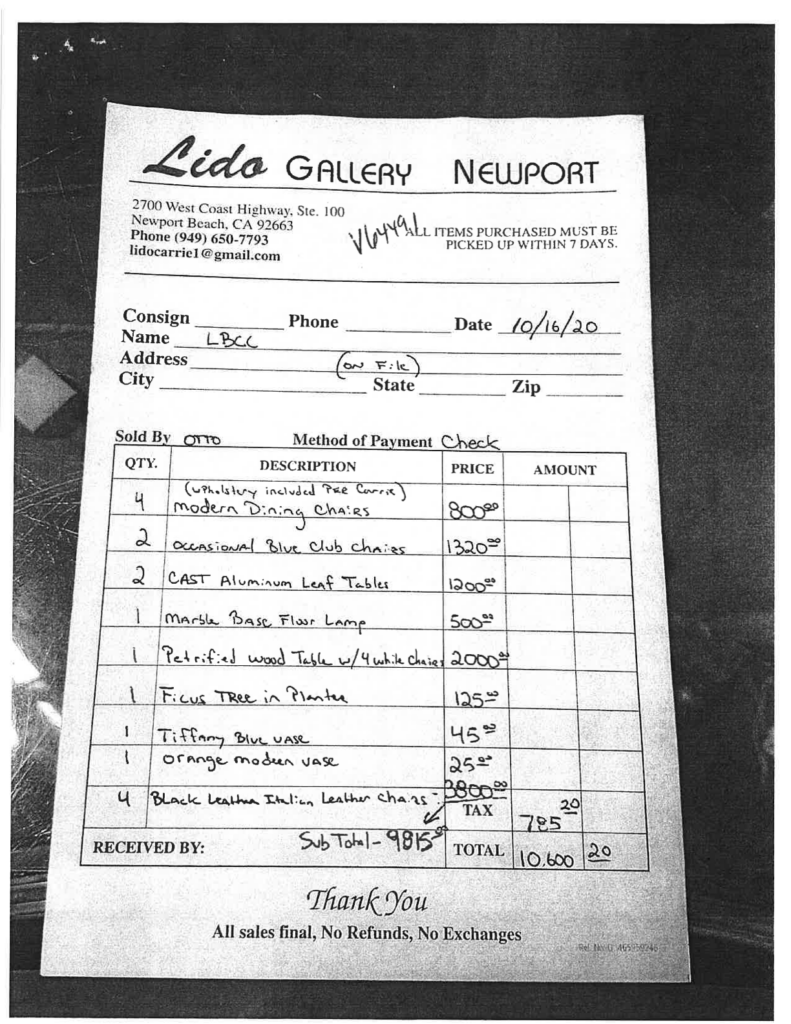 Dozens of hand-written receipts from Lido Gallery were among more than 130 pages of receipts and invoices the Post reviewed.

What’s more, Falzon said, ASM Global failed to properly track items after they were bought, leading to a situation in which the former finance director said he could not easily confirm whether the purchases Goodling billed to the parking fund were ever used by the convention center or even arrived.

“We had this practice of paying for stuff we didn’t even receive,” Falzon said. Other items, like giant stuffed animals, chaise lounges and crystal chandeliers, sat broken or unused in the convention center’s storage area, according to Falzon.

Long Beach froze the parking fund in late 2021 and, in April, hired the Macias Gini & O’Connell firm to audit the $3.5 million spent over the past five years. That included $604,008 paid to Goodling’s organization and at least $71,503 to the Lido Consignment shop near his home, according to a memo prepared by the firm for city officials and obtained by the Post.

The firm interviewed Falzon, his successor as finance director, and other convention center employees, including the then-general manager and facilities director, to understand how the parking fund was being utilized.

The convention center operator, ASM, confirmed that Goodling’s organization was buying items outside the normal budgeting or planning process, which allowed for “unauthorized purchases to occur” and go undetected until an invoice was submitted for reimbursement or the item arrived unexpectedly at the convention center, the accounting firm wrote.

To assess whether the purchases by Goodling and others were legitimate, the accounting firm settled on a sampling of $391,868.26 in transactions to scrutinize in detail. They planned to examine invoices, purchasing records and approval processes for each transaction before performing a physical inventory to ensure the items could be located.

The audit never got that far.

In a summary of its findings produced in July, the firm wrote that convention center operator ASM had no formal records tracking when individual items were purchased, where they were stored and whether they’d been sold or otherwise disposed of.

Instead, ASM tracked parking fund purchases with an Excel spreadsheet kept separate from its normal accounting system. When the firm’s auditors asked to see the invoices, receipts and other records justifying the expenditures, ASM produced “most of the requested documents” but the process was soon stymied by “a lack of adequate information.”

Because of the inadequate records, the firm informed Long Beach that its contracts with the city would have to be expanded beyond the original $40,060 agreement to complete the task up to audit standards, according to Deputy Economic Development Director Johnny Vallejo, the city employee overseeing the project.

Vallejo said the city considered paying for the more intensive “forensic inventory” required to continue looking for improprieties, but decided against it. He said it would have “dramatically” increased the cost of the undertaking. Vallejo said he could not provide an exact amount to the Long Beach Post because he did not request a formal quote.

Instead, he said, city staff performed their own review of ASM’s records and tested Falzon’s allegations of missing items by spot-checking 10 purchases to confirm their presence at the convention center.

Despite the lack of formal tracking, ASM did maintain invoices and other documentation to back up the validity of expenditures from the parking fund, according to Vallejo. Plus, he said, the auditing firm told the city that year-to-year balances recorded on Excel spreadsheets were mostly correct to within a few dollars.

“Generally, we have confidence that that stuff is accurate,” Vallejo said, adding that if any concerns arise in the future, Long Beach could rehire the accounting firm to complete a full-scale audit.

In late December—five months after the firm submitted its limited findings to the city—Long Beach released the results of the review with a list of suggested corrective actions. The documents included a pledge from ASM to bring its procedures and policies for the parking fund up to industry standards and create a formal tracking system for items it purchases with city money.

“ASM Global has already taken steps to implement the suggested improvements and commits to fully implementing the City’s plan in a timely manner,” the company assured the city in documents reviewed by the Post.

In light of the promises to tighten controls, Long Beach unfroze the parking fund, allowing purchases to resume.

Despite the accounting firm’s misgivings about ASM’s records, city officials said they concluded that all prior purchases “were consistent with the City’s broader long-term vision for the Center,” which it has praised as a key economic engine for the city. Officials attribute that success, in part, to their partnership with Goodling’s organization, according to a companion memo written by Economic Development Director Bo Martinez.

Goodling did not respond to messages sent Monday morning.

Falzon, for his part, continues to maintain that his core complaint—that items purchased by Goodling frequently went unused, arrived broken or were never delivered to the convention center—remains largely unexamined.

“The fraud,” he alleged, “is in the physical inventory.”