Just under 350 migrant children were being housed in an emergency shelter at the Long Beach Convention Center on Tuesday, with more expected to arrive this week, federal officials said.

The first group of children arrived on Thursday and more came over the weekend as the Convention Center is expected to eventually house up 1,000 kids from mostly Central America who are waiting to be reunited with family or sponsors in the United States.

The temporary shelter in Long Beach is one of several across the country that have been set up by the Department of Health and Human Services to help with the increase of unaccompanied migrant children arriving at the Mexico border.

As of Sunday, nearly 22,000 children were in care of Health and Human Services, which is leasing the Long Beach Convention Center until Aug. 2.

Officials and community leaders last week were given a tour of the site, which featured colorful butterfly decorations, books, stuffed animals and backpacks laid out on cots. The site also features a recreation area where children can play inside or outside and a large screen for movies.

The Long Beach facility will house mostly girls under 17 and boys under 12.

On Tuesday, Long Beach Mayor Robert Garcia was one of four witnesses to testify in a virtual hearing for the House Subcommittee on Border Security, Facilitation, and Operations, which is part of the House Homeland Security Committee.

The hearing, titled “Unaccompanied Children at the Border: Stakeholder Perspectives on the Way Forward,” was a chance for members of Congress to hear from witnesses and look at ways to improve the immigration system.

Garcia, who immigrated to the U.S. from Peru as a child, noted his own background and his city’s long history of welcoming immigrants. He said Long Beach has been eager to help in a humanitarian mission.

“I want to be very clear that these facilities should be temporary and the goal is quick, family reunification,” he said.

Garcia said the children are receiving “the best of care,” with three meals a day and snacks, medical care, education several hours a day and play time with books and video games. The children also paired with social workers and mental health care and an immigration lawyer.

The facility has already received thousands of books and toys donated from the community and is accepting more through its book and toy drive at various sites throughout the city. 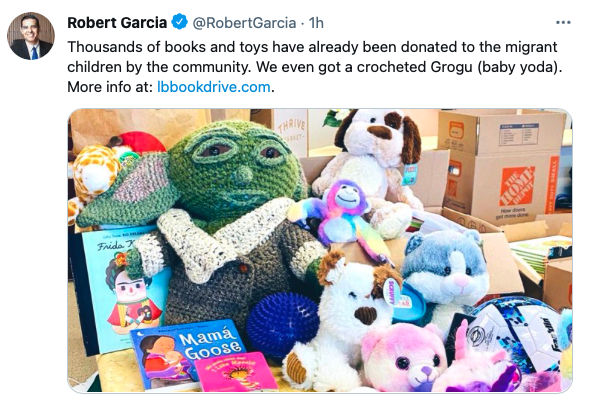 The Convention Center will serve at an emergency facility until Aug. 2 at the latest. The center plans to resume scheduled events starting Aug. 8.