Long Beach officials and a few community leaders got their first look at a holding facility for migrant children inside the Long Beach Convention Center Thursday morning just moments before kids began arriving there from the U.S.-Mexico border.

Mayor Robert Garcia, the City Council and other elected officials toured rows of cots, medical facilities and recreation areas where children will stay until the U.S. Department of Health and Human Services is able to place them with sponsors or family members in the U.S.

The first children arrived shortly after the tour and a scheduled press conference where officials said the site is expected to house up to 1,000 children until it shuts down in August. Up to 150 were expected to arrive Thursday.

Children, mostly girls 17 and under, will be arriving in groups every other day, according to the Department of Health and Human Services, which is operating the site. Some boys, 12 and under, may also be housed there, according to a statement from the department. 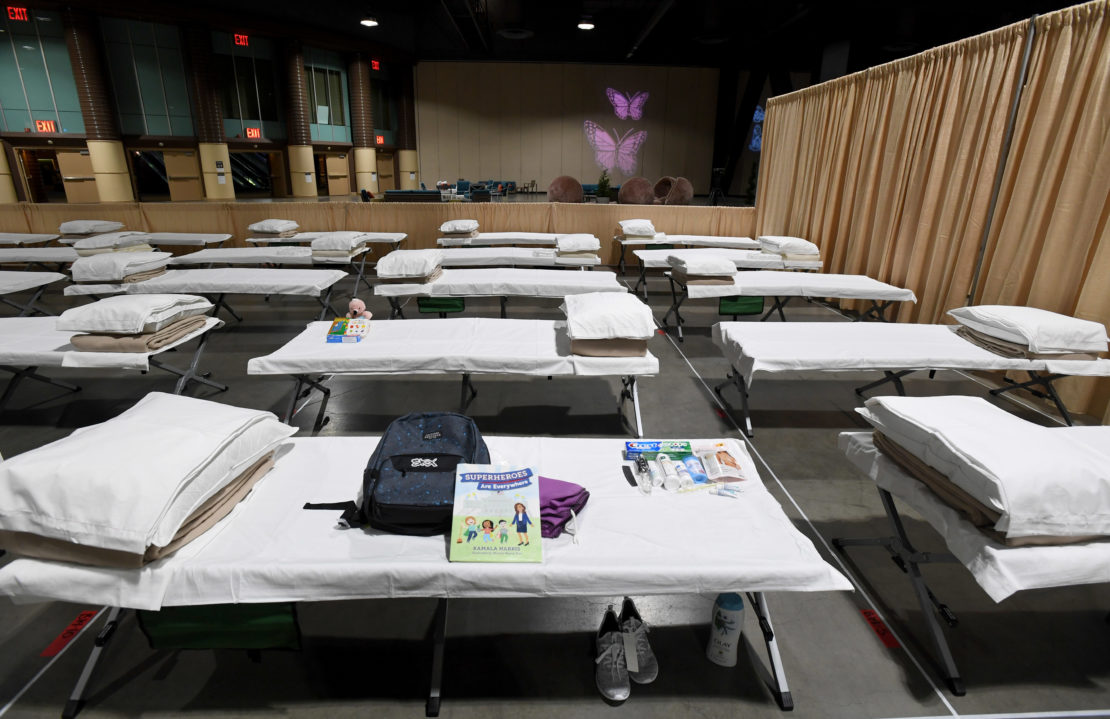 The sleeping area set up inside Exhibit Hall B of the Long Beach Convention Center where migrant children found at the border without a parent will be temporarily housed. The beds are in pods of 30. Photo by Brittany Murray, Press-Telegram/SCNG.

The facility was made available after the White House requested help from Garcia’s office and the City Council voted in early April to allow lease negotiations with the federal government to move forward.

Three sources with knowledge of the contract negotiations between the federal government and the Convention Center management said the feds are paying between $170,000 and $200,000 per day to use the space. That price tag doesn’t include other expenses for the federal government like health care for the kids.

At a press conference following the tour, Garcia said that the goal is to have these children reunited with family or sponsors in the U.S. within seven to 10 days, but he acknowledged that some children arriving don’t have identified family members to connect them with and some children might take longer to pass through the site.

However, Garcia said that the kids are coming straight from the border and are often found without adults and had, until now, been kept at detention centers that are less humane than the one opening in Long Beach.

“These are some of the most vulnerable children,” Long Beach Congressman Alan Lowenthal said during the press conference. “These are the ones that made it through a horrible situation to even get to the United States.”

Garcia, who immigrated to the U.S. from Peru as a child, said being in the facility was emotional for him. 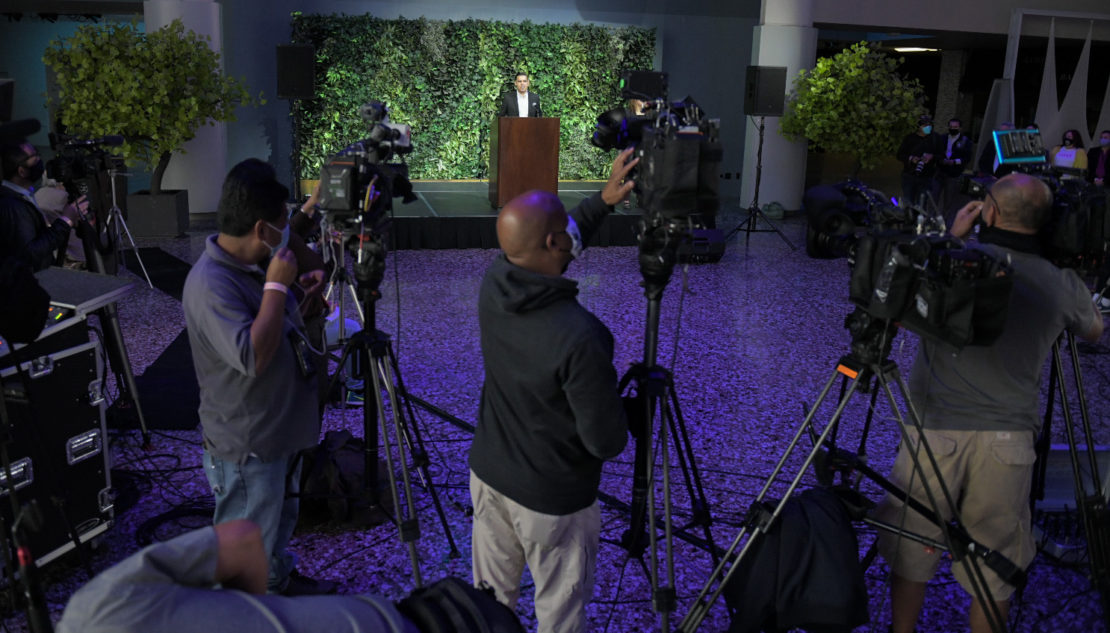 “It’s very personal for me that each child is welcome and I’m very grateful that there were welcoming Americans and people when I arrived with my family that showed us kindness and love and eventually guided us through a very complex process to become citizens,” Garcia said. “It breaks my heart that we have a system today where children cannot receive the same kind of opportunity that I received when I went through the immigration system.”

In a statement, Health and Human Services Secretary Xavier Becerra thanked the city for agreeing to let his department use the facility as the government works to increase its own bed space so it will no longer require sites like the convention centers in Long Beach, Dallas and San Diego its used to relieve overcrowding at border facilities. 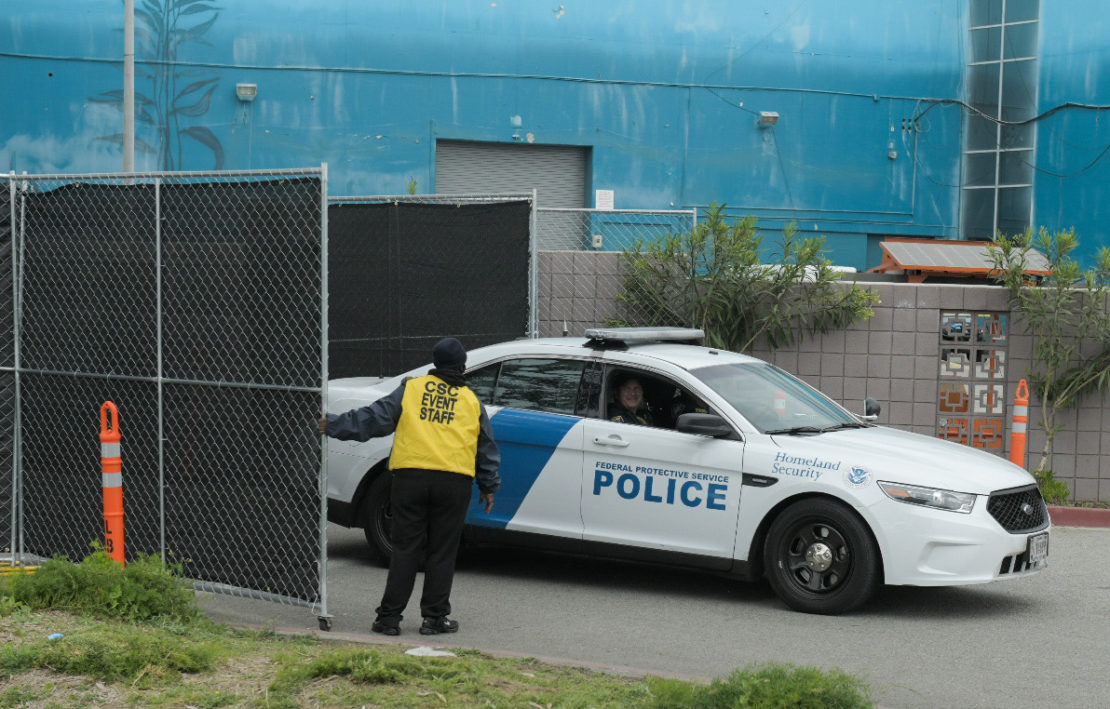 A Homeland Security vehicle leaves through a gate at the Long Beach Convention Center, which is now housing migrant children, April 22, 2021. Photo by Thomas R. Cordova.

Record numbers of unaccompanied children have recently arrived at the border, many fleeing gangs and poverty in Central America. That combined with the pandemic has left federal officials scrambling for space.

The Long Beach site is expected to house no more than 1,000 children at any given time and Garcia promised earlier this month that a hard stop date would come in early August. The Long Beach Convention Center has already announced plans to go ahead with scheduled events with the first being Aug. 8.

Only a select number of media was allowed inside the site for the tour but more access could be granted once the site is up and running, according to a federal official. 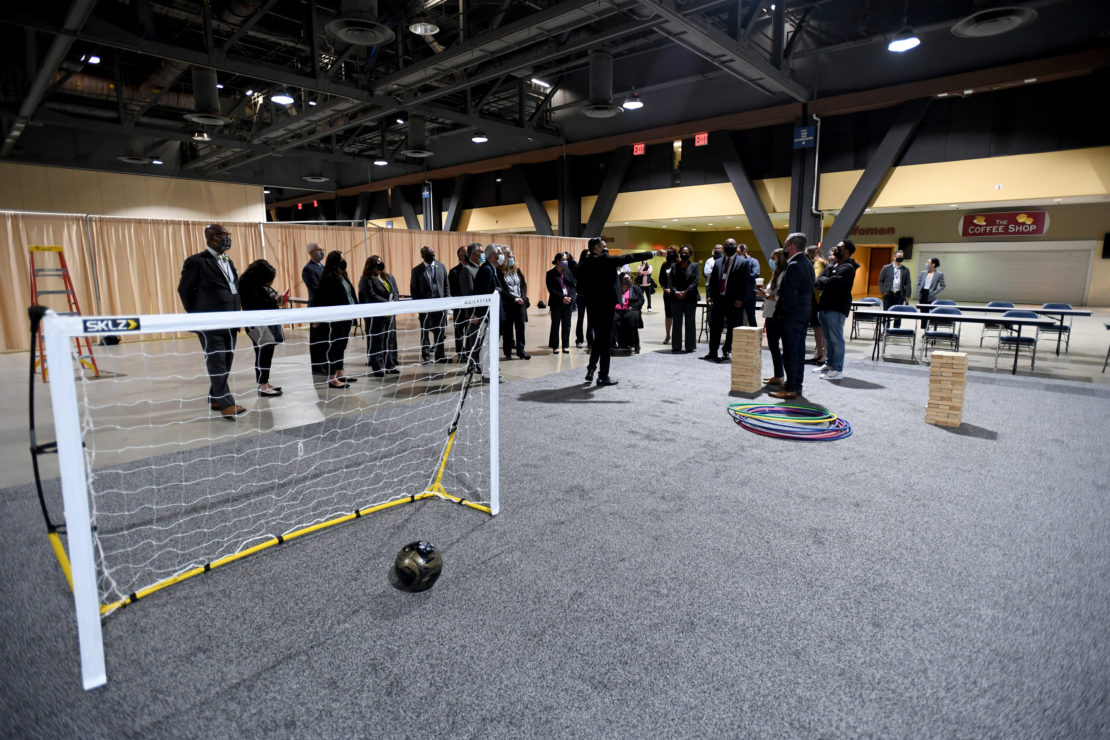 Mayor Robert Garcia speaking to officials in the recreation area that children will have access to in the Convention Center. There is an in indoor and outdoor recreation area at this site. Photo by Brittany Murray, Press-Telegram/SCNG.

Those who did see inside the facility said that it was warm and welcoming with kids toys, decorations and a homey feel. There’s also a store where kids can pick out their own clothes and other items while maintaining some autonomy.

Mungo Flanigan said unlike other facilities like the cavernous, colorless site at the San Diego Convention Center, which is largely an empty room with cots, the Long Beach site is broken into smaller rooms that feel more like a home.

Councilwoman Cindy Allen, who represents the area that includes the Convention Center, said that Health and Human Services officials had commended the Long Beach site as one of the best out of the 13 it’s operating.

“I wasn’t expecting to feel that warmth and welcoming when I walked in,” Allen said. “You can really tell that it’s set up for young children.” 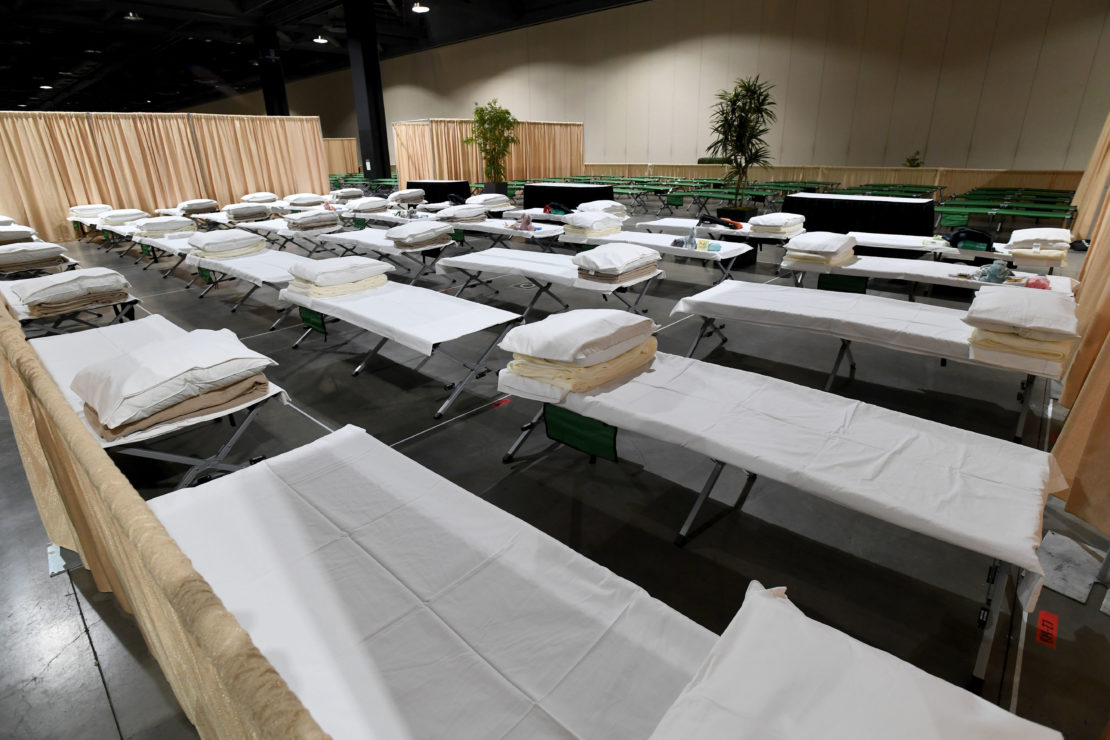 The sleeping area set up inside Exhibit Hall B of the Long Beach Convention. Photo by Brittany Murray, Press-Telegram/SCNG.

Jessica Quintana, executive director of Centro CHA, called the facility beautiful. “Children will be so comfortable here,” she said. ” … They are going to be provided with the best quality of care.”

But the site was vandalized earlier this month by people protesting its use as a migrant facility. They painted slogans like, “no kids in cages.” 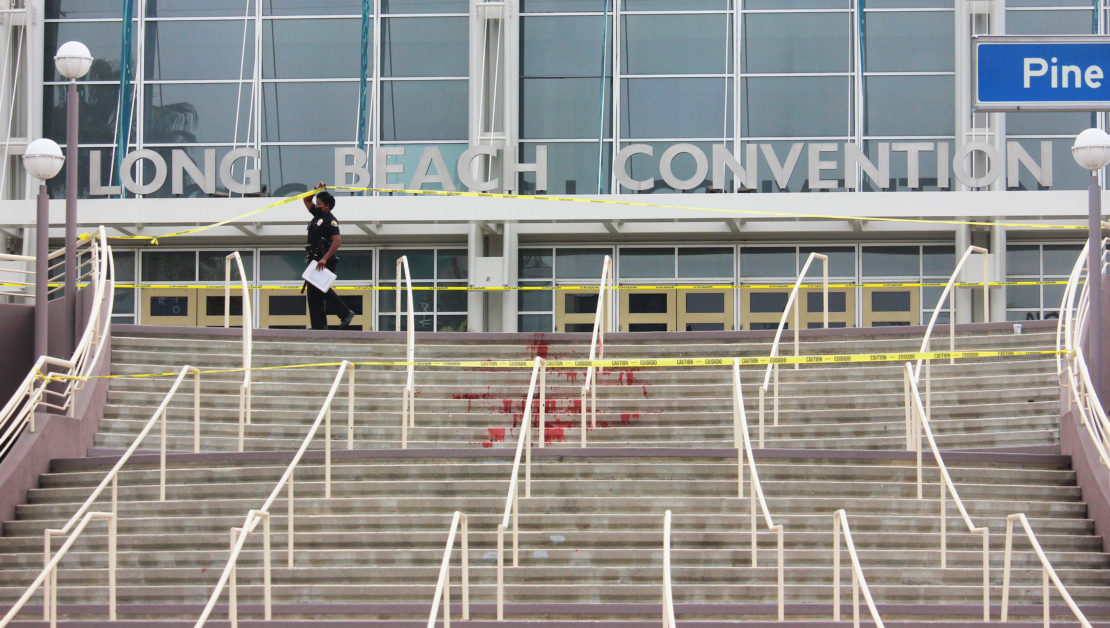 What appears to be red paint on the stairs leading up to the Convention Center. Monday, April 12, 2021. Photo by Brandon Richardson.

And in the comments of the city’s live feed of the press conference on Facebook, the Long Beach Immigrant Rights Coalition wrote that the city “should NOT promote this facility as a replicable model.”

They called on officials to instead combat “this new norm” that incarcerates children.

In his comments after the tour, Lowenthal said the U.S.’s immigration system has been broken for decades.

“The city didn’t create this,” he said. “What the city can do is make sure that children who are caught up in this broken system, that we can provide them services that they need.” 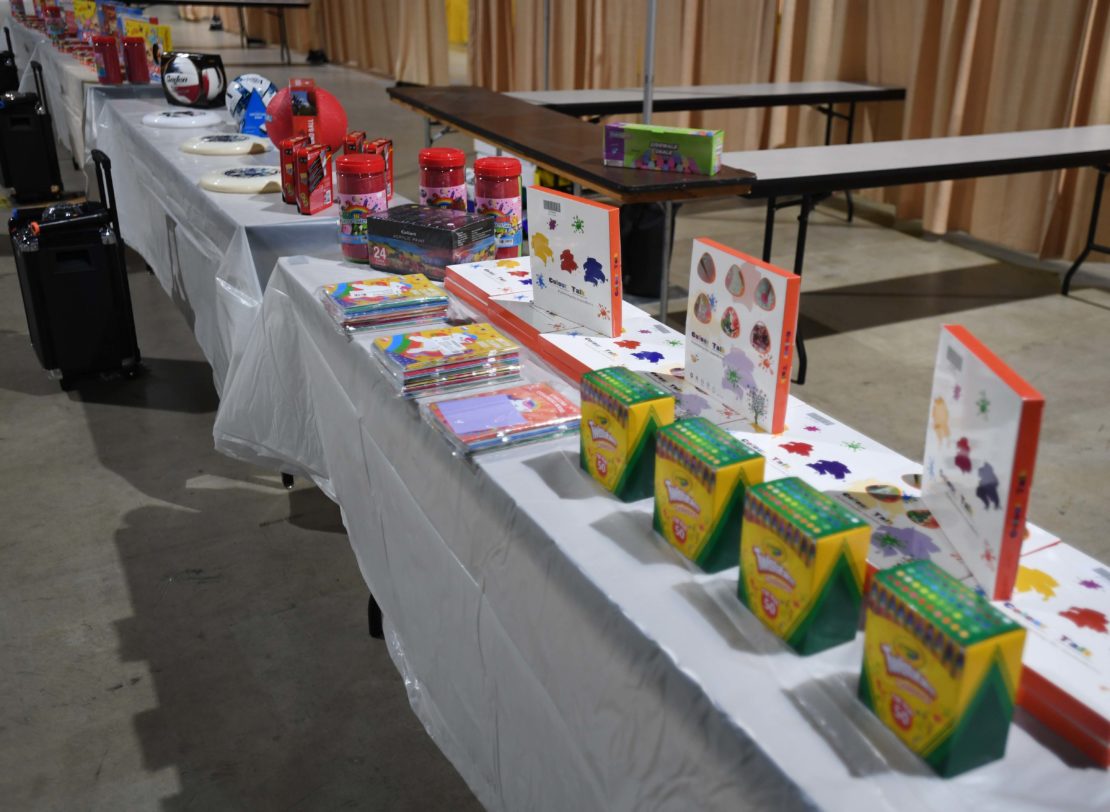 Some of the recreation items that children will have access to in the Convention Center. Photo by Brittany Murray, Press-Telegram/SCNG. 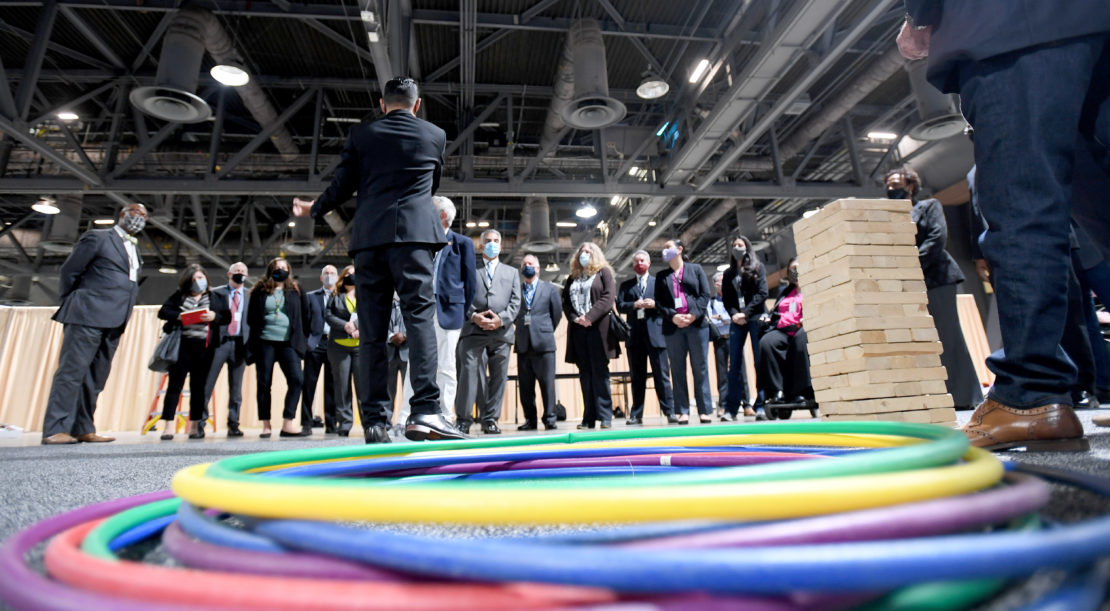 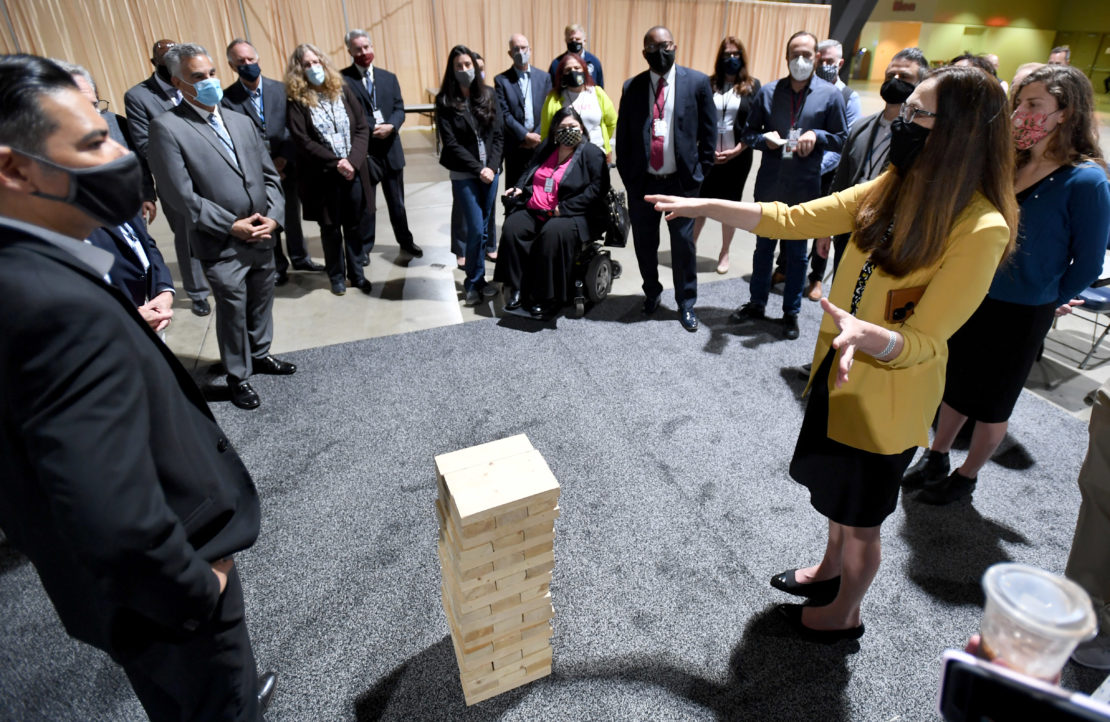 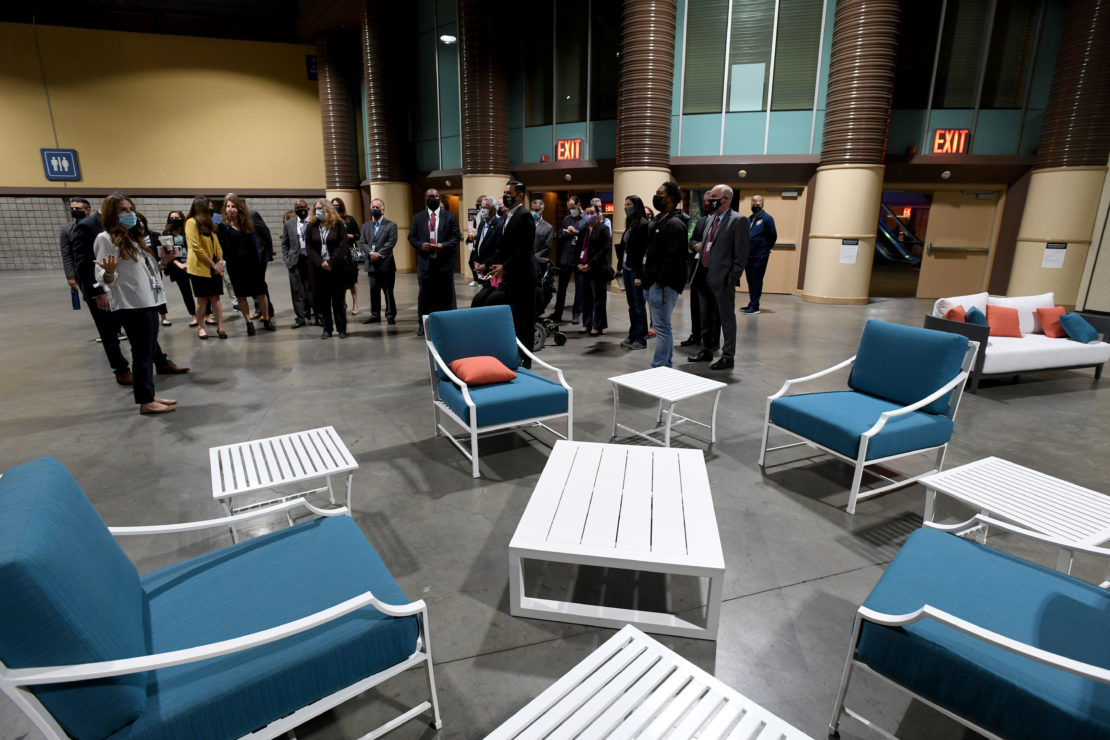 The area set up inside Exhibit Hall B of the Long Beach Convention Center. Photo by Brittany Murray, Press-Telegram/SCNG.

Editor’s note: This story has been updated to reflect that the estimated amount the federal government is paying to use the space is $170,000 to $200,000 per day to use the Convention Center.