The Long Beach City Council and the public got its first extended look at a housing policy that could determine where future density and affordable housing is located, sparking some early opposition to the fact that much of East Long Beach could be left untouched.

Long Beach needs to make room for 26,502 units over the next eight years, according to the latest Regional Housing Needs Assessment (RHNA) approved by the Southern California Association of Governments in March. And nearly 60% of those units need to be affordable.

The city met just 17% of its affordable housing needs during the last RHNA allocation cycle.

Part of the Housing Element, a document that guides development in the city for the rest of the decade, is an inventory of parcels that shows where city has space. The city must then zone that space appropriately to allow new units to be built.

If the city can’t identify enough parcels, it would have to identify parts of the city to be rezoned within three years of the state certifying the Housing Element, which could happen by the end of the year.

A preliminary inventory shows a concentration of available parcels in the city’s Downtown area as well as North and Central Long Beach. Nearly all of neighborhoods east of Lakewood Boulevard or Ximeno Avenue were left out of the inventory.

The parcels overlap much of the city’s identified regions where its recently adopted inclusionary housing policy could require affordable units to be built into new developments.

“It’s like red lining 2.0,” said Elsa Tung, a policy analysis with Long Beach Forward, a group that advocates for communities of color. “The map clearly shows that predominantly White East Long Beach is excluded from new housing and the burden of greater density is all on the western half of the city, especially Downtown and Central Long Beach.”

A large part of what contributed to the locations of the parcels was the Land Use Element approved by the City Council in 2018. The contentious, years-long approval process pitted homeowners against renters and proponents for more density in the city against communities of wanting to maintain the character of their single-family neighborhoods.

The version adopted by the council left nearly half of the city zoned for single-family housing and whittled down capacity for increased density in other parts of the city. Large swaths of East Long Beach are zoned for single-family housing. The council removed nearly 800 acres of land that was set to be zoned for more denser developments before approving the Land Use Element in an 8-1 vote. 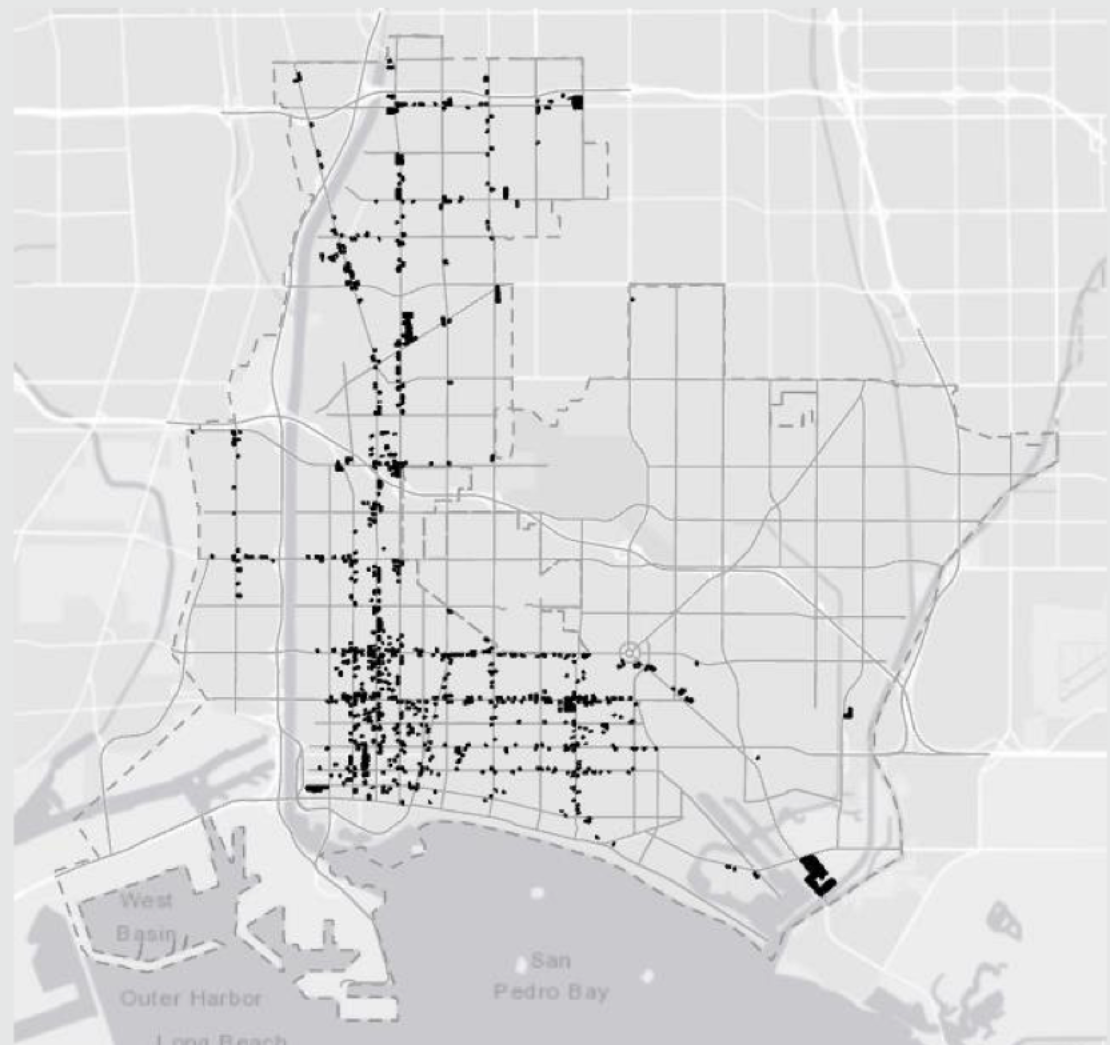 A screenshot of the preliminary parcel inventory map identified as potential places for development of new housing.

City staff said that in creating the preliminary inventory list, it eliminated certain types of parcels from inclusion because they’re not zoned properly (industrial, commercial only) or are used for open space, waterways or have historic resources.

State law prohibits parcels that were included in the last Housing Element from being identified in the current one, unless the city can prove that it will be developed in this housing cycle.

Christopher Koontz, the city’s deputy director of Development Services, said that the rule has been an obstacle for Long Beach, but one it’s been able to overcome.

“The rule is really trying to crack down on cities who cheat,” Koontz said. “It’s not Long Beach, but there are some cities across the state that list properties that they have no intention to actually develop.”

Koontz also noted that there are parcels in the inventory that are in the East Long Beach council districts, but they’re located in parts where the zoning would allow for future development. Koontz said the City Council has the ability to rezone any part of the city at any time, but a move like that at this time is unlikely.

This distribution of the parcels was recognized in discussion by council members, as were concerns that the way sites were identified as potential spaces for future development could lead to gentrification.

Councilman Al Austin said that there is concern over the equitable distribution of new affordable units in the city. The part of North Long Beach that he represents has several clusters of parcels identified as potential spaces for development.

“We’ve had this conversation for many, many years,” Austin said. “There is a clear disparity and it makes a lot of sense to expand where we can.”

Austin also suggested that the city look at accessory dwelling units and unused office spaces as opportunities to build up the city’s housing stock.

Officials are hopeful that with recent changes to zoning and enhanced density bonuses, which allow developers to build taller in exchange for reduced parking requirements and inclusion of affordable units, will create enough room to accommodate around 31,000 units.

The Housing Element draft report is expected to be ready for public review by June and the City Council could adopt it and submit it to the state by October. Two public hearings at the Planning Commission and City Council are expected to happen in the months after the draft is released in June.

More information about the city’s Housing Element and links to a virtual open house can be found on the city’s Development Services website.