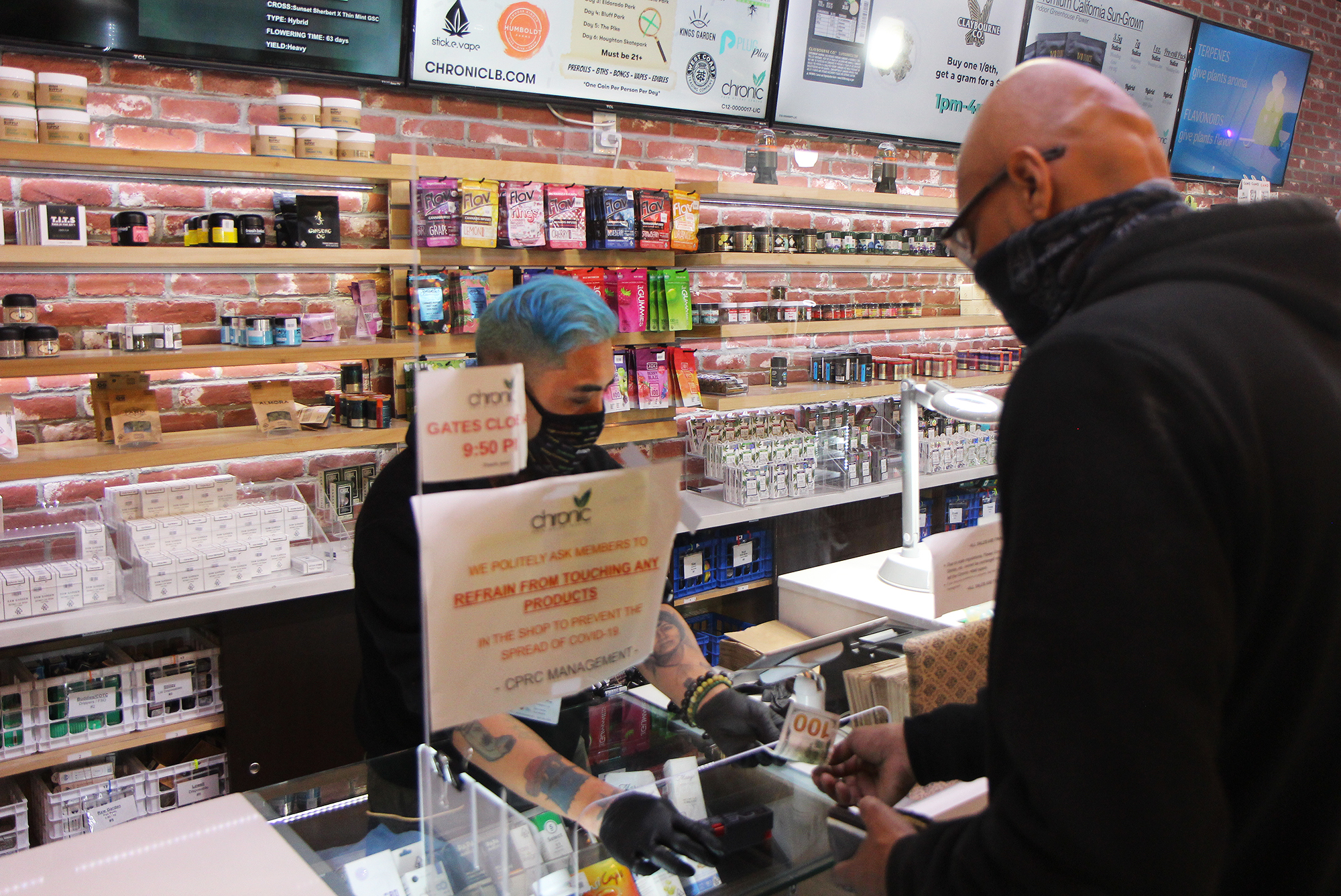 Long Beach could soon start allowing additional cannabis dispensaries to operate in the city, but a decision on how and where they’ll be able to operate and whether the industry will be taxed more could be months away.

The additional eight dispensary licenses the council is considering creating would be reserved for equity applicants, or those who have less net worths and have criminal backgrounds tied to cannabis. It could be years before they actually open, but several council members expressed a desire to speed up that process.

The City Council voted Tuesday night to move forward with crafting an ordinance to address how far apart new equity dispensaries should be located from existing dispensaries and how applicants will be prioritized and selected for the coveted eight new licenses.

The council also asked that an alternative funding source to a tax increase on cannabis businesses be found for the roughly $555,000 it could cost to expand the city’s cannabis social equity program to support new business operators.

A proposal from city staff suggested raising the tax rate on some cannabis businesses by .25% to offset the startup and ongoing costs to pay for additional employees to administer the program, something that was opposed by the industry and multiple members of the council.

“Not that I’m opposed to ensuring things are taxed at an appropriate level but it does seem a bit counter to what we just did,” Mayor Robert Garcia said of the proposed tax increase and its potential affect on equity business owners.

City Manager Tom Modica said that tax increase was proposed because the extra revenue produced by additional cannabis equity businesses likely wouldn’t be available for another two to three years.

The city could pursue grant funding or reduce positions in other departments to cover the costs for the equity program, Modica said, and those options will likely be presented to the council when the ordinance is drafted.

The ordinance would also allow an unlimited number of delivery-only licenses for equity applicants that would allow businesses to deliver cannabis so long as it has a commercial address in the city. Delivery services for Long Beach businesses are currently limited to existing dispensary storefronts

A feasibility report published by the city earlier this month made a number of recommendations alongside the one to add the eight additional equity dispensary licenses.

The report suggested expanding the city’s “Green Zone,” the areas where dispensaries are allowed to open, by reducing buffers for parks, beaches and schools, with the latter being aligned with the state buffers of 600 feet.

Raising the cannabis tax by .25%, using a lottery to help award applicants that were vetted by a panel of volunteers and experts and amending the city’s municipal code to create more protections for equity applicants were also suggestions contained in the report.

Using a lottery is likely out after several council members asked for the city to use a merit-based approach only, meaning that applicants would go through a traditional request for proposal process and the businesses that are most likely to thrive could be selected. Garcia also asked that applicants who have been advocating for these licenses for years be rewarded for those efforts.

“If we have social equity folks who have been engaged with the city for years and they qualify and meet the criteria, should that person have the same or a better chance of opening a dispensary than an applicant coming in?” Garcia said. 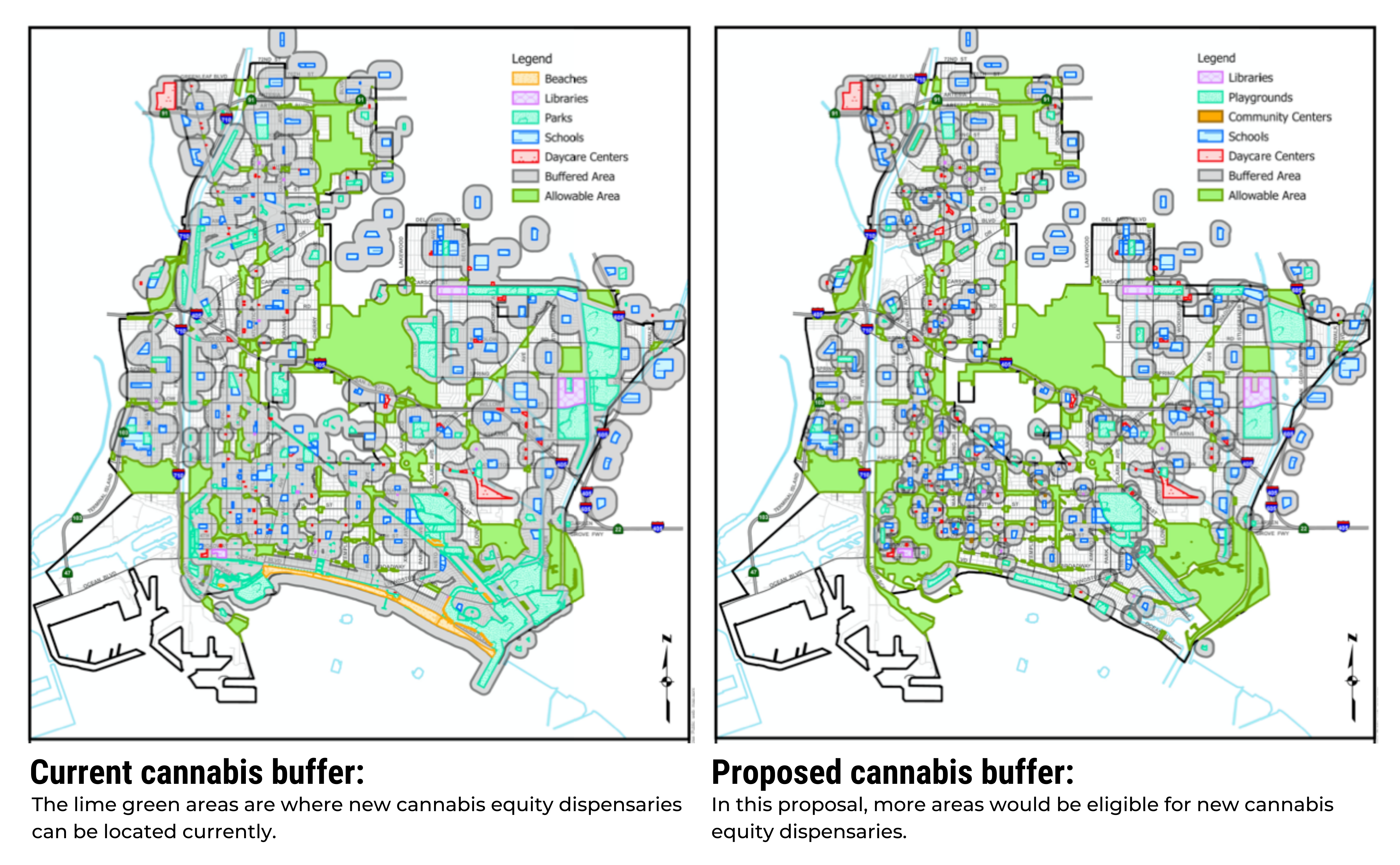 One of the focal points of Tuesday’s debate was on the buffer zones that determine the city’s “Green Zone.” City staff recommended reducing the distance dispensaries can be located from schools to the state’s requirement of 600 feet, and eliminating the buffers for beaches and parks unless they have a playground.

However, that received pushback from some members. Councilwoman Suzie Price asked that a density cap, something that would limit the number of dispensaries in a given City Council district, be an option for when the ordinance returns for a vote next year.

Another recommendation from Councilwoman Mary Zendejas could see buffers between individual dispensaries be increased from 1,000 feet to 1,500 feet. Not every member of the council was on board with increasing buffer distances.

“We’re trying to reduce the buffer zones and expand the areas where equity licenses can be located in our city and that particular addition makes things less restrictive,” Councilman Al Austin said of the request. “It pushes us in the opposite direction.”

Austin had requested the feasibility report in March and has been supportive of creating additional opportunities for equity licenses. Austin, who represents the city’s 8th City Council district that includes parts of Bixby Knolls and the Los Cerritos Neighborhood, has just one dispensary in his district.

“For me, the most important thing is that it’s a fair process,” Austin said.

Those in the cannabis industry were widely supportive of the recommendations heading into Tuesday night with the exception of the tax increase. They said the increase could work to send more potential customers to the black market that can charge lower prices because of the absence of taxes.

While the city appears on track to create eight new dispensary licenses there was support from the community and the industry for as many as 34 additional licenses being set aside for equity applicants and some operators still believe the number should be higher than eight.

The eight licenses would give equity owners a 20% share of the city’s dispensary operations once they’ve all opened shop.

“Twenty percent is what you leave for a tip at a restaurant,” Carlos Zepeda said, owner of Pusherman Delivery. “It’s an afterthought.”

The city expects for the ordinance, with all the council requests made Tuesday, to come back to the council for a vote at sometime in February.

It would then hire a consultant to help establish how applications will be evaluated including who would serve on the panel that’s expected to vet each application.

The application process, which could start as soon as May 2022, could end in November when the city thinks it could begin to issue the eight new dispensary licenses.