Police said their jail was in 'shambles.' The man hired to fix it ended up quietly fired • Long Beach Post News
- ADVERTISEMENT -

When the Long Beach Police Department hired a well-regarded former captain from the Orange County Sheriff’s Department to run its jail, there was a laundry list of fiascos to fix.

At that point in 2016, the Downtown lockup was in “shambles,” according to one department official’s assessment, with violations of state standards that included deficient mental health services, substandard training, lax record-keeping and even inadequate jailhouse bedding.

With no oversight from prior managers, staffers had gone “rogue” and were abusing overtime, the official said in internal police documents.

And it was the freshly hired Tom Behrens’ job to reform the troubled operation. But the assignment wouldn’t last long. 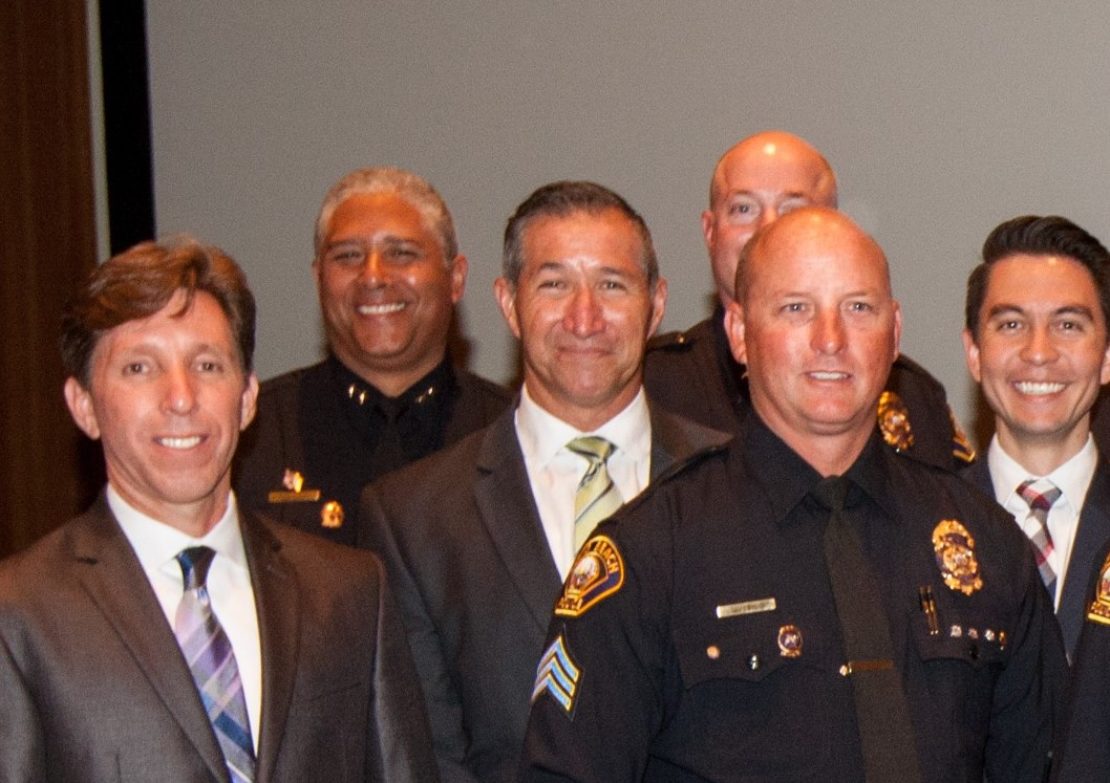 In 2019, he was fired following an internal affairs investigation that spanned more than a year, according to hundreds of pages of previously confidential Long Beach police records. Released last week only after a judge forced the city’s hand, they provide the first detailed look at the problems that were plaguing the jail and the events that led to Behrens’ then-unexplained departure.

Behrens, the documents allege, encouraged employees to claim overtime that police suspect was not actually worked. They say one of his sergeants regularly claimed 12 hours of overtime a week for more than a year, even though he often left work early.

Behrens tried to justify the extra compensation to internal investigators. His sergeants, he said, had taken on extra workloads in the understaffed jail despite the fact that the department had denied them a raise.

While Behrens lost his job, police have so far declined to say what penalty was imposed on  three sergeants accused of filing various amounts of unjustified overtime. Two are still appealing their discipline.

Detectives also referred the matter to the Los Angeles County District Attorney’s Office. Prosecutors declined to file criminal charges after concluding that Behrens had sought approvals for the use of some overtime and believed his actions were consistently proper. As for the sergeants, prosecutors noted that they had a “good faith belief” their actions were authorized and legal.

Publicly, the police department had been largely silent about Behrens’ performance in trying to restore order to the jail. But the newly released documents reveal that, behind the scenes, there was turmoil and finger-pointing.

In October 2017, an anonymous letter was sent to department officials, several high-ranking city employees and a local newspaper, the Beachcomber. The two-page document aired a handful of complaints about jail management but specifically targeted a sergeant whom the writer alleged regularly collected an extra 12 hours of overtime each week despite often leaving work early.

“Everyone here is aware of this fraud but no one wants to speak up for fear of retaliation,” the writer said in all capital letters.

According to court documents, the letter prompted internal affairs investigators to spend hundreds of hours interviewing employees and scouring emails and text messages. They also examined timecards, comparing them with building-access records, security camera footage and other computer files to determine whether jail staff worked the hours they claimed.

About 15 months later, the investigation’s results made their way up the department’s chain of command. In February 2019, then-Deputy Chief Alex Avila wrote a 60-page memo to Chief Robert Luna, outlining the accusations against jail chief Behrens, the man who’d been hired to clean up the lockup.

According to the newly released memo, which laid the groundwork for Behrens’ firing, police officials acknowledged that the jail administrator had been thrown into a tough job, confronted with multiple potential violations of state standards that his two predecessors had allowed to fester.

The jail, they said, was “a huge liability” to the department, with dilapidated facilities, outdated policies, inadequate medical staff, incomplete records and mismanaged contracts.

Names of department employees describing the problems were redacted in Avila’s newly released memo, but one of them accused staff of mishandling prisoners’ property and money. Even the jail’s elevator was a problem, he said, preventing Fire Department medics from reaching prisoners in emergencies.

In all, Avila wrote, Behrens and other employees identified potential violations of state standards in more than a dozen areas including training, record keeping, segregating inmates, mental health services, food, hygiene and security.

Despite this blunt assessment, current police officials stress that the state’s biannual inspections at the time found no major violations. They say Avila’s memo also doesn’t reflect the current state of the jail.

“When I got to the jail it was in great shape,” said Commander Mike Pennino, who took over the facility from Behrens’ replacement in late 2019.

Avila’s lengthy memo did not delve deeply into jail conditions because the internal investigation focused mostly on Behrens’ use of overtime as he tried to fix those issues. It was in the course of that probe that several jail sergeants also came under scrutiny, with three ultimately facing discipline for allegedly submitting inaccurate timecards.

In one case, investigators alleged, Behrens offered several sergeants an hour of overtime each on the days they processed overtime approvals for officers’ court appearances, a task previously performed by a dedicated “court affairs” sergeant, a position that was now vacant. Behrens told investigators that he obtained approval from a deputy chief to use a court-related overtime fund to fill in some of those staffing gaps. Whether work was actually performed for that money became a focus of the probe.

Some of Behrens’ employees refused his overtime offer, according to Avila’s memo, saying they believed the practice was illegal if they could complete the task during their regularly scheduled shift.

The memo also disclosed that Behrens consistently approved 12 hours of overtime a week for a particular sergeant because his workload was reportedly so heavy. Behrens allegedly allowed him to leave work early, ostensibly to work at home to write memos, research policy changes or perform other administrative duties.

As part of the case, internal affairs investigators tried to reconstruct the sergeant’s work schedule to determine whether he deserved the extra pay he was earning. Although the sergeant’s name is redacted in the memo because he is appealing the department’s findings against him, related court documents identify him as Sgt. Louis Perez.

By tracking building access and security camera footage, investigators calculated that Perez’s early departures totaled 116 hours and 47 minutes between April 6, 2017 and May 3, 2018. Meanwhile, he was claiming 12 hours of weekly overtime, according to the memo.

Altogether, Perez collected $67,364 during those unaccounted-for hours, according to prosecutors who later reviewed the case for the district attorney’s office.

Perez and Behrens contended in interviews with investigators that the sergeant was hard at work at home and thus deserved the extra money. Investigators were unable to definitively dispute that contention, despite examining phone records, emails and computer files.

For ease of tracking the extra workload, Behrens told investigators he simply instructed Perez to tack on an extra three hours of overtime to each of his four weekly shifts.

Investigators asked Behrens whether he ever audited Perez’s hours and work to ensure he earned the overtime.

“The audit was me,” Behrens said. “I received the work, so there was no, there was no need for me to audit anything other than the work that I received from it, that was the audit.”

Perez, Behrens said, “always over-performed what I have expected to get out of that twelve hours.”

But to the department, this amounted to a “casual indifference” by Behrens to his financial duties, something Avila wrote was “a serious cause of concern.”

In February 2019, the police chief determined that Behrens should be terminated because he neglected his duty, acted dishonestly and failed to properly supervise his employees, among other policy violations.

For two years, Long Beach police refused to release details of the events leading up to Behrens’ dismissal. They contended it was a confidential personnel matter.

The Long Beach Post, along with Beachcomber columnist Stephen Downing, sought the documents in 2019 under a new law requiring California law enforcement agencies to release records about employees who have acted dishonestly, committed sexual assaults or seriously injured anyone.

Downing—a former Los Angeles Police Department deputy chief who frequently spars with the LBPD over public records—accused the city of stonewalling and sued for the records.

Despite Chief Luna’s finding that Behrens had acted dishonestly, the city argued in court papers that the records were shielded from disclosure because the acts in question did not relate directly to a criminal investigation or the concealment of misconduct by a fellow officer.

Behrens’ failure to verify his employees’ overtime hours and his less-than-forthright responses to internal affairs investigators did not meet the new transparency law’s threshold for disclosure, the city’s attorneys contended.

“Make no mistake about it, they do not like this statute,” Beck said of the new law. “It offends the way they do business inside Long Beach and have been forever.”

Ultimately, the judge agreed that the records were covered by the law and ordered that they be released—with the exception of details about the internal affairs investigation into the overtime practices of the three sergeants working under Behrens. The judge ruled that this information could be kept private because the officers had not been found to be dishonest or were appealing their discipline.

In January, police provided the redacted Behrens documents to Downing and posted them several weeks later on a publicly available web portal.

Despite Behrens’ firing, some of the changes he implemented during his brief tenure at the jail have remained. Pennino, the current jail chief, said he still has a compliance officer dedicated to keeping staff up to date on training issues and state rules—a position Behrens created.

The department, however, has made some changes of its own. For instance, the jail is now overseen by a police commander as opposed to a non-sworn civilian administrator like Behrens.

“For the time being,” Pennino said, “it was the decision of the chief and the city manager to keep a sworn position in there for better oversight.”

In all, the district attorney’s office estimated that Behrens authorized more than $71,963 in questionable overtime and early departures for his sergeants. That total, though, was less than the $100,000 it would’ve cost to hire someone for the empty court-related position Behrens was lobbying to have filled.

Arguably, prosecutors wrote in closing the case, “the LBPD saved money by paying the sergeants overtime.”