Mayra Garcia-Cortez had spent almost her entire life in her apartment before her family was served an eviction notice. She said the apartment building had a rat and cockroach infestation, and after numerous letters and phone calls to the landlord and property owner, nothing had been done.

Garcia-Cortez lives with her brother, who has multiple disabilities and is deaf and blind, and the infestation “was to the point where we were pulling roaches off of his face at night,” she said.

After calling Code Enforcement, the apartment manager finally fixed the issue, and was also fined for not fixing the issue earlier.

Not even a week later, the family was evicted.

“We were down on our knees basically,” said Garcia-Cortez. Being low-income and with two parents who are immigrants, there was nowhere else to go, she said.

Not long after, the family came into contact with Long Beach Residents Empowered, or LiBRE.

“They really held our hand through the process of really trying to stay away from the manager’s harassment,” said Garcia-Cortez. “They supported us in so many ways and represented us with the management company when it came down to the date of the eviction.”

With the help of LiBRE, Garcia-Cortez’s family was able to overturn the eviction, and since then, has become more involved with housing rights.

“We didn’t even know that renters had rights at that time. And thanks to them, we were able to keep our home and we’re still here,” said Garcia-Cortez. 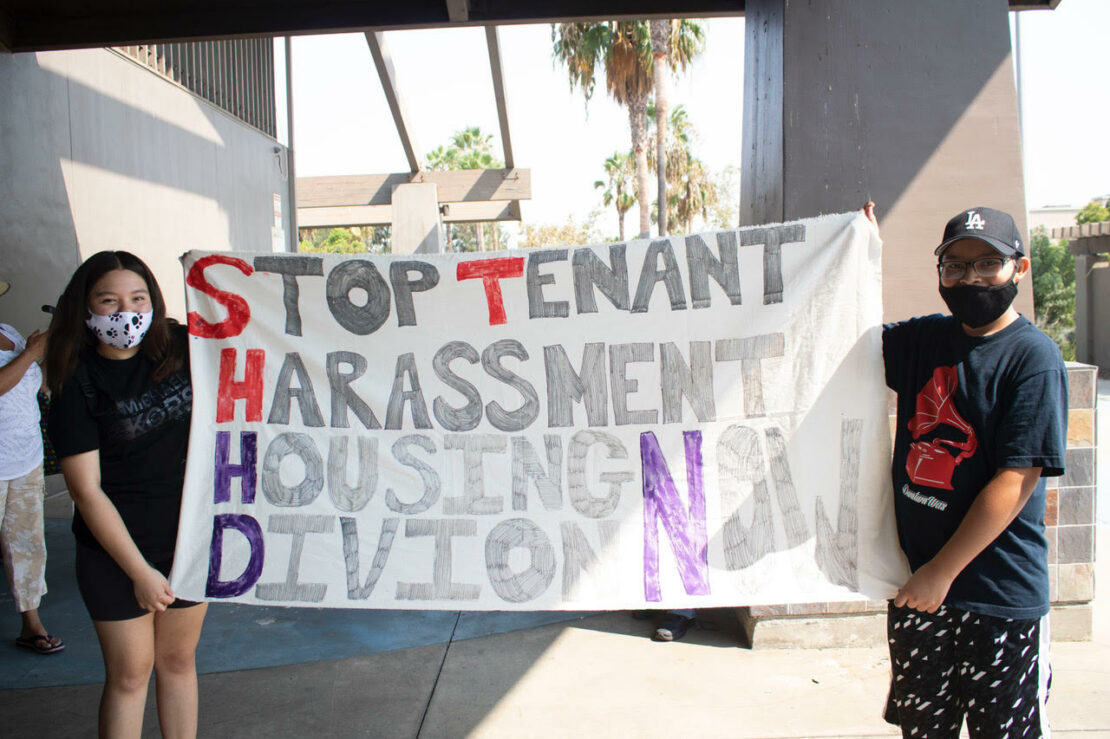 Expanding affordable housing is a top priority for LiBRE, as is helping to organize tenants to become stronger advocates for themselves, said Leanna Noble, who has worked in housing justice since the 1970s, and was a founding member of LiBRE, recently taking on the role of program manager as well.

Long Beach is notably a renter’s city, with 61% of nearly 500,000 residents renting, according to the city’s Housing Element draft. Of these, 43% pay more than 30% of their income in rent, and 27% of all renters in Long Beach have extremely low or very low incomes, compared to 11% for L.A. County.

The most vulnerable, however, are residents of color, who are more likely to be renters and low-income.

While this is the reality across the country, Noble said, a significant factor contributing to housing issues in Long Beach is institutionalized racism, due to deliberate systemic policies.

“What we’re attempting to overcome here didn’t happen overnight,” said Noble. “It takes a very well-informed approach to try and correct both the horrific damage that has been done, not just to individual families, but to entire neighborhoods and cities.”

Apart from expanding affordable housing, LiBRE has made substantial efforts in bringing about policy change, working in coalition with the Housing Justice Coalition and other community-based groups.

According to Noble, many current housing policies directly contradict the rhetoric surrounding reconciliation and equity.

“It’s both political obstacles, but it’s also vision and dreaming of a different kind of world,” said Neal Richman, who focuses on grant writing and supporting organizational development for LiBRE.

According to Richman, another significant challenge for LiBRE has been the redevelopment of Downtown Long Beach, which has also worsened matters for low-income renters.

“No affordable housing was built, and there was no preservation ordinance for existing housing,” said Richman. “So it’s both historic, it’s modern, and we stand out around the country.”

Since the pandemic, LiBRE advocated for the successful passage of a COVID-19 eviction moratorium, as well as a prohibition on late fees, Section 8 terminations and utility shut offs, benefitting over 300,000 renters in the city.

“While something like a moratorium was critical, and is still critical, to an extent, it’s kicking the can down the road,” said Richman. “And now we’ve kicked the can as far as we can kick up to the precipice. It wasn’t really addressing the problem, it was just saying, let’s put the brakes on the symptoms of the problem.”

For Noble, the goal is to go beyond an eviction moratorium and win significant protections for renters, including determining a fair rent along with protection against harassment, through policies and ordinances to truly make rental homes secure and stable.

Looking forward, LiBRE hopes to soon relaunch in-person legal clinics and in-person activities, and is also working to create their own housing database in a partnership with CSULB and other organizations.

“There’s going to be certainly between now and the end of the year an increased visibility,” said Noble, who also urged residents to keep an eye on the City Council agendas and to show up at the meetings.

In the HUD buildings where Garcia-Cortez works, tenant unions are currently returning to in-person regular general meetings, and are eager to support tenants in other HUD buildings in starting their own unions.

“People are saying, we not only have got a voice, but we’ve got a story to tell, and it’s no longer an individual’s story. This is a community-wide story,” said Noble.

During the annual luncheon honoring grant recipients, Rotarians and students have an opportunity to meet each other and raise awareness of financial awards available to local students.

In its over 60 years of history, the Scholarship Foundation has funded nearly 5,000 annual student scholarships totaling more than $6 million, according to a statement.

The Aquarium of the Pacific’s First Wednesday event brings together scientists, authors, and other experts for an illustrated talk paired with book signings, art exhibits, or meet and greets and cocktail/social hours.

The upcoming Dec. 1 event from 7 to 9 p.m. will include discussion of restoration of the endangered white abalone, and will feature Melissa Neuman of NOAA Fisheries and Oriana Poindexter of Pelagic Projects. Visitors can also enjoy the debut of an abalone photography exhibit along with music and cocktails. Beverages will be available for purchase, but each lecture participant will receive one complimentary beverage for the cocktail hour.

Parking with Aquarium validation is $8.

Reservations are required, so reserve your seat in the theater here.

The presentation will also be live streamed here.

The Aquarium of the Pacific’s Ocean Theater is located at 100 Aquarium Way, Long Beach, 90802.

Employees from Independence at Home, the community service division or SCAN Health Plan in Long Beach, continued their long-standing tradition of serving vulnerable older adults in Long Beach for the Thanksgiving holiday.

This week, the organization delivered care bags to 1,500 seniors across eight different senior apartment buildings. The bags contained a cheerful greeting card from SCAN along with a grocery gift card.