In May, when David Law and Veena Sison-Law received the news that their daughter Violet had a fatal and rare disease, GM1 gangliosidosis, they sprung into action.

GM1 gangliosidosis is an aggressive disease in which the body does not produce adequate enzymes to break down certain molecules. These molecules instead collect on the brain and spinal cord, resulting in widespread neurological degeneration that leads to an inability to walk, eat or speak.

“I think I was in shock,” said Law. “It was easy for us to become scientific and talk about some of the physiology and all that, but looking back on all that now, it’s hard to even remember what I said, who I was talking to.”

Both physicians, the couple knew there were limited options available for them to explore beyond the limited existing clinical trials.

They started a GoFundMe, with the goal of reaching $25,000 to help fund medical research.

Instead, the GoFundMe skyrocketed, and by June 11, Violet’s second birthday, the fundraiser had reached over $87,000.

The couple celebrated her “very bittersweet second birthday party” in the park, with Violet dressed in a Minnie Mouse costume, and surrounded by friends and family. 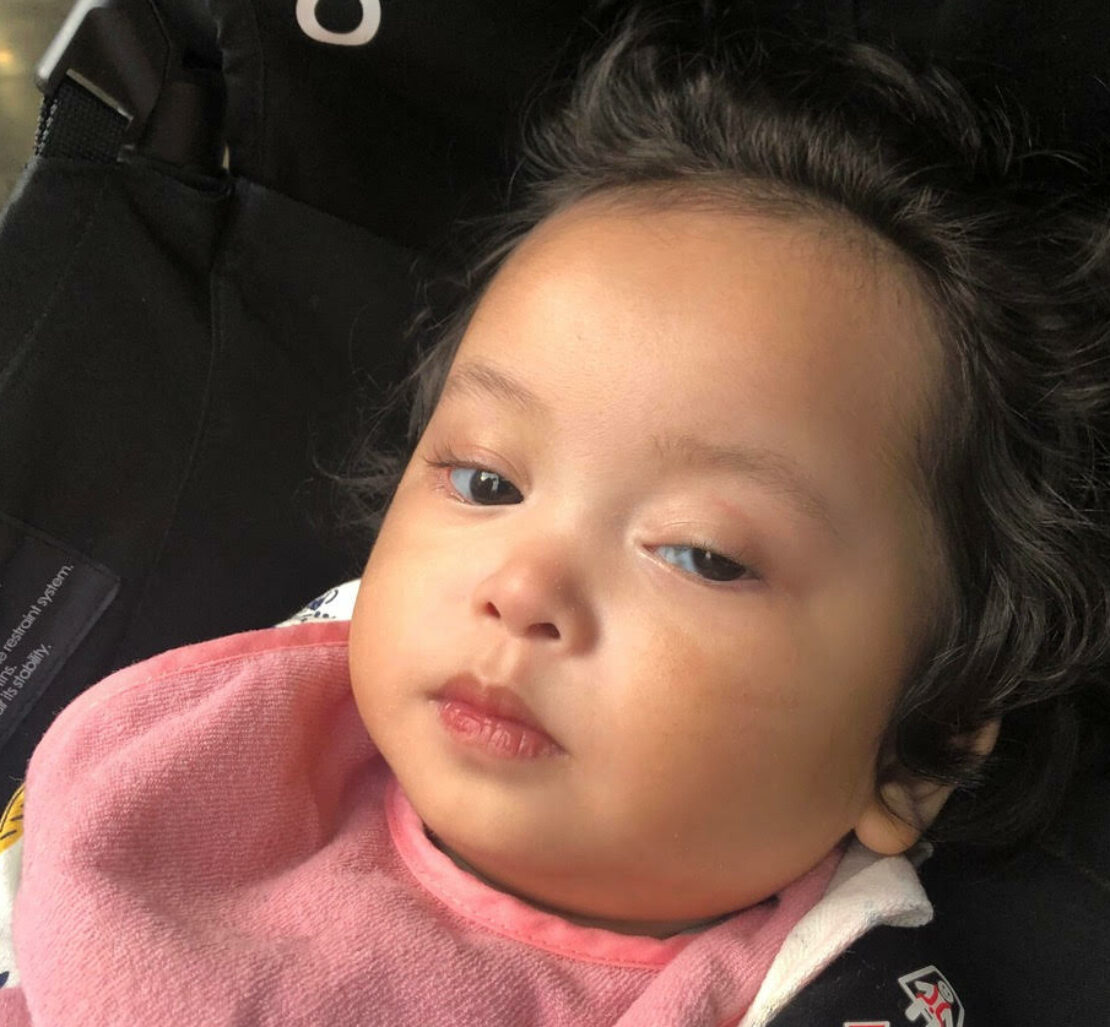 Violet Law, 2, was diagnosed with GM1 gangliosidosis, a fatal and rare disease, in May of this year. She was recently accepted into a clinical trial that will hopefully slow the disease’s progression as well as improve the symptoms. Photo courtesy of David Law.

But then, it went quiet.

After the surprising success of the GoFundMe, the Law’s tried to adapt to their new sense of normalcy.

“After the shock wore off, there was still a lot of pain and anger and sadness,” said Law.

There were three genetic clinical trials available at the time, but Violet’s condition had progressed too far along for her to qualify.

“It was heartbreaking, because we’d put so much into this, and none of them came through,” said Law.

The parents slowly watched Violet lose more and more of her developmental milestones. She is not able to speak, walk or crawl and she even lost head control motions. She is also having some difficulty swallowing and now has a feeding tube from her nose to her stomach.

But then came what Law considers a miracle.

Due to advocacy and fundraising, the Cure GM1 Foundation successfully lobbied for a clinical trial at UCLA to open up slots for those with GM1 gangliosidosis as a secondary population.

The trial initially was only recruiting for its primary population, adults with Tay-Sachs disease, also known as GM2 gangliosidosis, that functions very similarly to GM1.

Both GM1 and GM2 gangliosidosis occur in the same ganglioside pathway, and affect the nervous system, said Dr. Susan Perlman, the neurologist leading the trial. The progression and symptoms that are involved are very similar for both diseases.

“It’s important that any drug company includes a secondary population,” said Perlman. “A group that could benefit from the drug might not meet criteria to get into the primary population, but deserve, ethically, to have a trial of the drug under careful monitoring.”

According to Perlman, a common dividing point in most drug trials aimed at the nervous system is ambulatory versus non ambulatory.

“It’s similar to compassionate availability or expanded access, except it’s being done under the umbrella of a carefully monitored clinical trial, so that safety can be more closely monitored,” said Perlman.

The secondary population can also provide usable information that ultimately expands the drug’s usefulness upon FDA approval, she said.

On Sept. 3, the family applied, without having any expectation of success.

After at first being put on the waiting list, the couple finally got the news in October that they were able to move forward with participation in the phase 3 trial, which will test 70 to 80 participants across two populations.

“That was such a miracle, because we didn’t have to fly to Boston or New York or San Francisco or any other site,” said Law. “We live in Santa Monica, so we literally drove down the street to UCLA.”

Throughout the month, Violet received baseline testing, blood tests, and interviews, and in November underwent an electrocardiogram test and a spinal tap.

On Nov. 10, Violet received her first dose of the oral medication, venglustat, that will be taken for 104 weeks and is meant to reduce the build-up of gangliosides, hopefully slowing down the progression of the disease as well as improving the symptoms.

“Coming through all of that now, for the first time, we have hope, we actually have a treatment in a clinical trial with an unproven drug (that has) some very promising science behind it,” said Law. “This is essentially her new birthday, November 10th.”

According to Perlman, the brain is far more resilient than many people generally assume, and there is the possibility of regaining motor and developmental milestones.

“There’s concern that the child who has this illness will be permanently damaged, unable to grow in any meaningful way, while behind the scenes, we know that the brain is very responsive,” said Perlman. “I think this class of drugs should improve hope, not just amongst patients and their families, but amongst healthcare providers, that these will not ultimately be hopeless diseases.”

Perlman also stressed the importance of patients and families of those with rare diseases to connect with one another and give each other support.

“As a parent of one of these children, you are not alone,” she said. 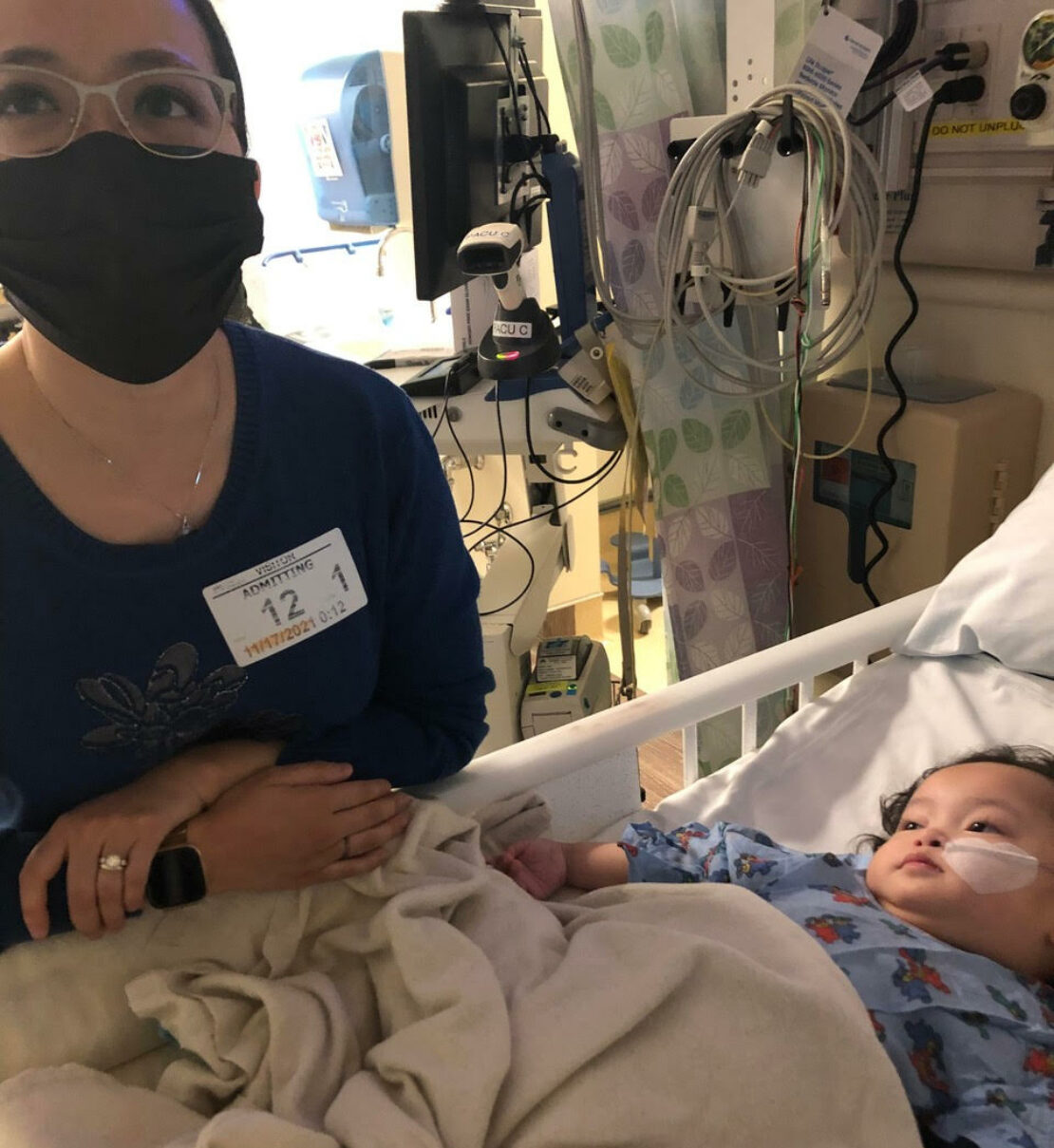 Two-year-old Violet Law began a 104-week trial of an oral medication meant to reduce the progression and symptoms of GM1 gangliosidosis. Photo courtesy of David Law.

For the Law’s, connecting with other families through the Cure GM1 Foundation was crucial, and Law also went through emotional coaching through Educational Awareness Center to cope with the anxiety and stress of the situation.

“I’ve been working on shifting my interpretation of this whole thing from being a hopeless curse to it now being an opportunity to really take care of a special child and to be more positive and optimistic and focus on it,” said Law. “You can’t be completely present and you can’t be the most effective parent out there unless you’re taking care of yourself as a person.”

Law urged parents in a similar situation to not give up on exploring every possible avenue because, as impossible as it may seem, all it takes is for one opportunity to open up, he said.

“Of course, we want the best for Violet … but if nothing else, it helps add to the knowledge base and the trials for this disease and these therapeutics that maybe in the future can provide a permanent, completely efficacious solution for kids with her disorder,” said Law.

And in the meantime, the family is making it a point to enjoy every moment possible with their daughter, going on regular outings and even small trips together.

For the Law’s, it is all about the little moments, such as when she looks up at her parents when they say her name, or the occasional giggle, often when watching cartoons, that “truly is a gift for us,” said Law.

“We are really committed to giving her the full life experience no matter what may come, and not holding back for any of these things, just because she deserves it,” said Law. 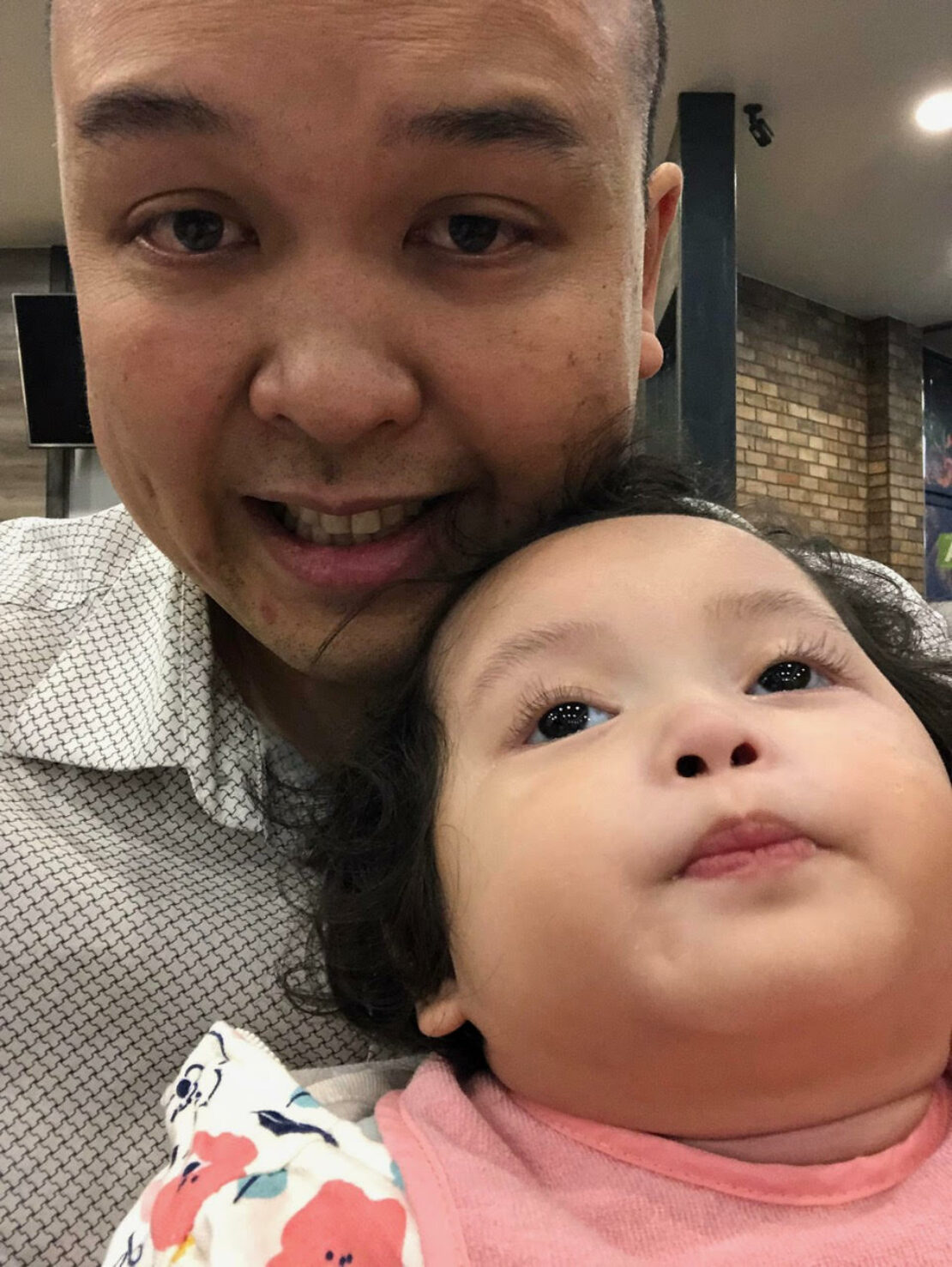 David Law and his two-year-old daughter, Violet, who was diagnosed with GM1 gangliosidosis in May. She was recently accepted into a clinical trial and began the treatment in November. Photo courtesy of David Law.

‘A terrible gift’: Parents of Violet, 2, begin fundraiser after daughter is diagnosed with fatal condition