Meet the 62-year-old who's running for LBCC's cross-country team • Long Beach Post News
- ADVERTISEMENT -
Help us light up the city; Add your home to the 2022 Holiday Lights map. CLICK HERE

Mike Fillipow is an avid runner who has joined his fair share of pre-workout stretching circles, but none of them were like his first practice this summer as a member of the Long Beach City College cross-country team at the age of 62.

A Long Beach native who called himself a “wannabe athlete” at Wilson High School, Fillipow taught science at Long Beach Poly High for 31 years while coaching swimming, track and cross-country.

That’s what made the LBCC Vikings stretching circle so awkward at first.

“(LBCC coach Julio Jimenez) was calling me Mike, and a couple former (Poly student-athletes) were calling me coach, and so I had to say, ‘We gotta straighten this out,’” Fillipow said. “I don’t like being called by my first name because of habit. When I grew up, you call everybody older than you ‘Sir’ or ‘Mr. Whatever.’ And I didn’t want to be called coach because that’s not what I wanted to be doing here. So we just came up with having them call me, ‘O.G.’ for ‘Old Guy’ so that’s kind of my nickname on the team. I’m O.G.”

Not only is he practicing with his teammates every day at 6:30 a.m., Fillipow was a scoring runner for LBCC at the South Coast Conference Championships 4-mile Palos Verdes Park course last week. By running a 28:49.7 to finish 51st out of 77 runners, Fillipow helped the Vikings finish second in the seven-team conference.

“This is something I wanted to do for a long time, it’s for the challenge,” Fillipow said. “I’ve never been on a running team. … I was just coaching for 30-plus years. I wanted to try to immerse myself in the other end of that. … I trained my ass off to slow down as little as possible every year.” 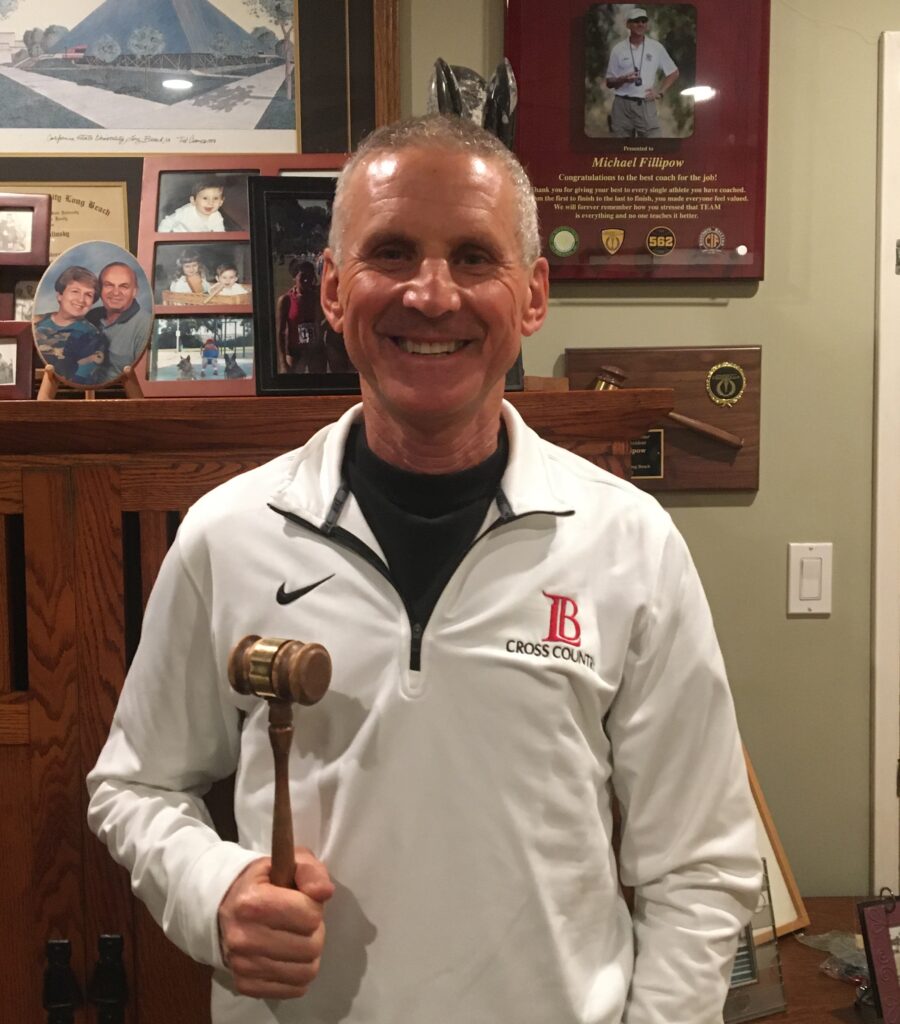 Fillipow is also giving back to local sports by being the president of the Long Beach Century Club—an organization that raises money for Long Beach sports. He joined the club seven years ago and stepped up to be president for two years in a critical post-COVID time.

“I feel we’re going in the right direction (with the Century Club),” Fillipow said. “We’re getting our membership back up. We’re also slowly changing our footprint on how we communicate and increase our social media presence. Those were some of my main goals coming in.”

Just like his team at LBCC, Fillipow knows it takes a good support system to get the most out of the club and its dedicated membership while local athletic programs came out of the pandemic shutdowns.

“There’s so many good people in the club that help run it like Dan Gooch, John Fylpaa and Sam Breuklander,” Fillipow said. “Their heart and soul are behind this and the club keeps rolling because of them, not because of me.”

Fillipow isn’t the only member of the LBCC cross-country team who could also be a member of AARP. In fact, his wife Amelia did the same thing a few years ago.

“Obviously, my training is a little bit different,” he said. “I never miss practice, but being older, you need more recovery. Coach Jimenez has been really good about trusting me when I should cut back.”

In order to stay eligible, Fillipow is taking 12 units of classes at LBCC’s Pacific Coast Campus. He enjoys working on his cabin so he’s taking classes in framing, roofing and interior carpentry.

During his 17 years as a Poly cross-country head coach, Fillipow’s Jackrabbits won 16 Moore League titles, including each of the last 13. They qualified for CIF in every season and made six appearances at the CIF State meet. He thinks the lessons he learned as a coach makes him a better teammate.

“I’ve never been part of a running team before,” Fillipow said. “It’s a challenge and that’s what I wanted. … I didn’t want to be perceived as a coach. I wanted to be a 100% athlete and just absorb that part of the sport. From that perspective, it’s been fun and I see how I would like to try to help out and I think that my next phase of all this is going to help, apply to be an assistant next year for the program.”

Local history: The 26-second flight of the Spruce Goose