Long Beach has been trying for years to bring more people to Pine Avenue. Finally efforts have paid off—unfortunately, however, it’s happening in the midst of a pandemic.

Late night crowds have been flocking to the Pine Avenue stretch between First and Fifth streets, which the city fully closed to vehicular traffic this summer.

City officials wanted to close the business corridor in part to help restaurants and bars that were financially struggling under city health orders to limit service to outdoor areas.

The plan appears to have worked, with crowds milling the streets while drinking alcohol in the late-night hours, with little ability for bars and restaurants to contain the crowds or enforce social distancing regulations.

Joe Hernandez, manager of King’s Fish House, agreed that it’s a bit like New Orleans, with “a lot of open drinking out in the streets, gathering of people, kind of a festival that’s gotten out of hand.”

The city is cracking down—at least for one day, today, Halloween. City Manager Tom Modica issued a letter to businesses along the corridor on Thursday advising that all businesses allowed to operate parklets must stop accepting diners at 10:30 p.m. Saturday, and must close by 11 p.m. 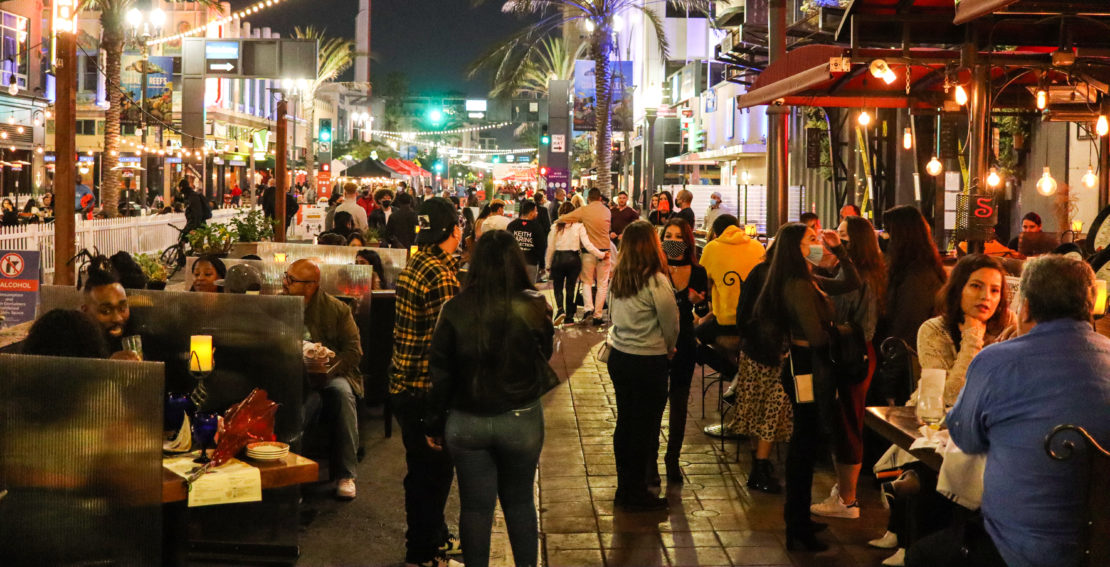 Signage is being installed Downtown advising patrons of the change, as well as requirements for social distancing. Modica said the city will be monitoring activity over the weekend “and will take additional future steps to prevent gatherings if problems persist.”

Though many bar and restaurant owners agree the crowds have gotten large, they hope the city doesn’t go overboard with restrictions.

Ron Hodges, owner of Shannon’s on Pine, said managers are trained to deal with problems, including a recent episode in which a man who violated rules against drinking on the street was kicked out.

“My managers tell me they’ve seen people drinking on the street, drinking out of cups, yes it goes on,” he said.

“What happens with the city when it comes to enforcement is it’s either lax or it’s strong. It’s been lax—they haven’t been reminding people, and now they’re saying, ‘We’re going to slam you.’”

Hernandez said he expects some pushback from patrons to the new rules on Saturday night.

“I think people are going to try to find an area to party,” he said. “With the city cracking down on that, I feel like that’s going to push a lot of that out of the area.”

Reporters Steve Lowery and Cheantay Jensen contributed to this report.