Some Long Beach businesses have taken extra precautions and boarded up their storefronts as the nation nears the final stretch of one of the most contentious presidential elections in recent times.

Crews at the Pike Outlets in Downtown were placing wooden boards over Guess and Forever 21 Saturday morning.

One crewman said he had another job later in the day at Venice Beach, saying that businesses probably didn’t want to relive the looting that occurred earlier this year.

Stores at the Pike Outlets were targets of looters in the chaos that unfolded in May following protests over the death of George Floyd while in Minneapolis police custody. 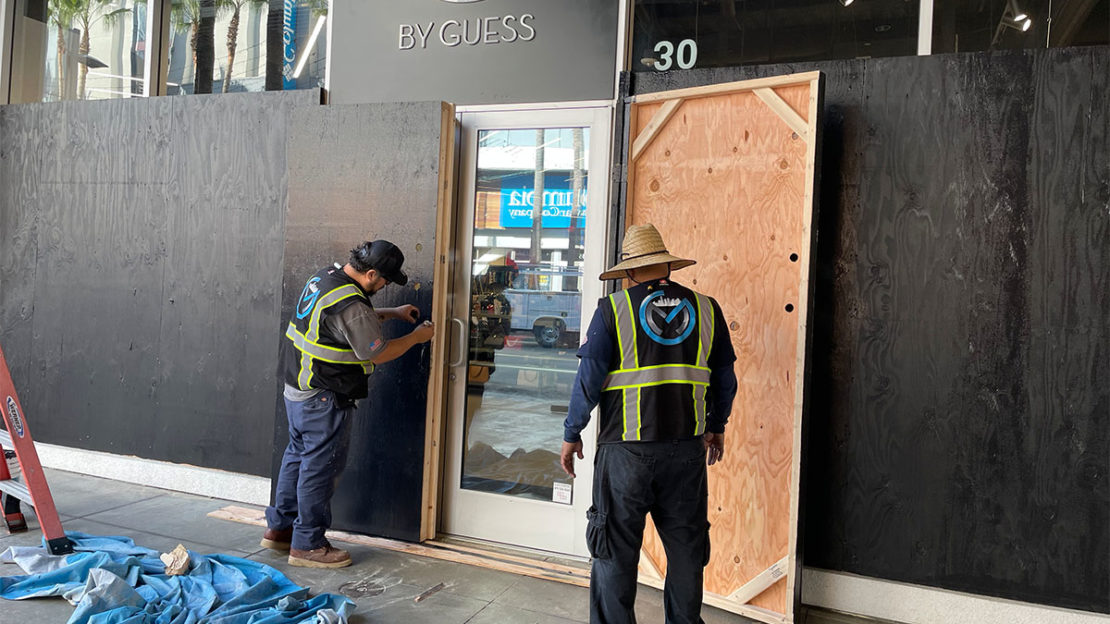 Workers paint over wooden boards installed on the Guess store at the Pike Outlets on Saturday, Oct. 31, 2020. Photo by Sebastian Echeverry.

While no official protest has been announced in Long Beach, the police department said earlier this week that it would be on heightened alert and people would see more officers patrolling the streets.

Police say they’re taking these steps because of the potential for demonstrations, unrest or other emergencies around Election Day.

“Our goal is to calm people, to reassure people,” LBPD Administrator Karen Owens said this week.

A message from #LBPD Regarding Upcoming Election Cycle

We're not aware of any info that will impact the @LongBeachCity. Please know we are preparing out of an abundance of caution and you'll be seeing more officers out on our streets to ensure everyone’s safety. #LBPDSafety pic.twitter.com/KVF0xEnv97

The Long Beach Area Chamber of Commerce sent an email out notifying patrons of the uptick in vigilance.

“Officers will be proactively engaging with business leaders and community members to educate them on the department’s preparedness for the election cycle,” the email read.

Kraig Kojin, president and CEO of the Downtown Long Beach Alliance, said the business improvement organization is in close communication with the police department in the event of civil unrest.

“We want to protect lives and property,” Kojian said. “We don’t want to see what happened on May 31 reoccur.”

The Downtown alliance sent a memo to businesses advising them to review the International Downtown Association’s safety checklist for community gatherings and protests.

Talk of potential unrest has left some business owners unsure of what to do. Rand Foster, owner of Fingerprints Music, said he noticed other businesses boarding up their storefronts as he came in to work Saturday. He and his staff have been discussing if they should follow, but they’re still unsure.

“We’re probably OK, but seeing other people’s reactions, we don’t know yet—still figuring it out,” he said.

Other cities have also announced increasing police activity for Election Day, and other businesses have also boarded up their stores.

In Los Angeles, Mayor Eric Garcetti said this week that while the Los Angeles Police Department will also be fully prepared to respond to any violence, he does not anticipate any widespread unrest.

“We are very prepared for the elections, but at the same time, I don’t want to buy into a narrative that there’s going to be chaos during our elections,” Garcetti said.